The latest episode of On the Record is now available! In this week’s episode we take a look at the Chicago Federal Reserve Bank’s fourth quarter survey, which suggests farm equipment loans could increase in 2021. In the Technology Corner, Jack Zemlicka discusses opportunities with early order programs in the midst of ongoing shortages and delays in parts availability. Also in this episode, a closer look at Deere and Kubota’s latest earnings releases and Fendt gains market share in Europe.

Farm Equipment Loans Could Rise in 2021

According to the Chicago Federal Reserve Bank, district agricultural credit conditions dramatically improved in the fourth quarter of 2020.

The share of the District farm loan portfolio deemed to have “major” or “severe” repayment problems was 4.3% during the quarter — lower than the share reported in any final quarter since that of 2014. 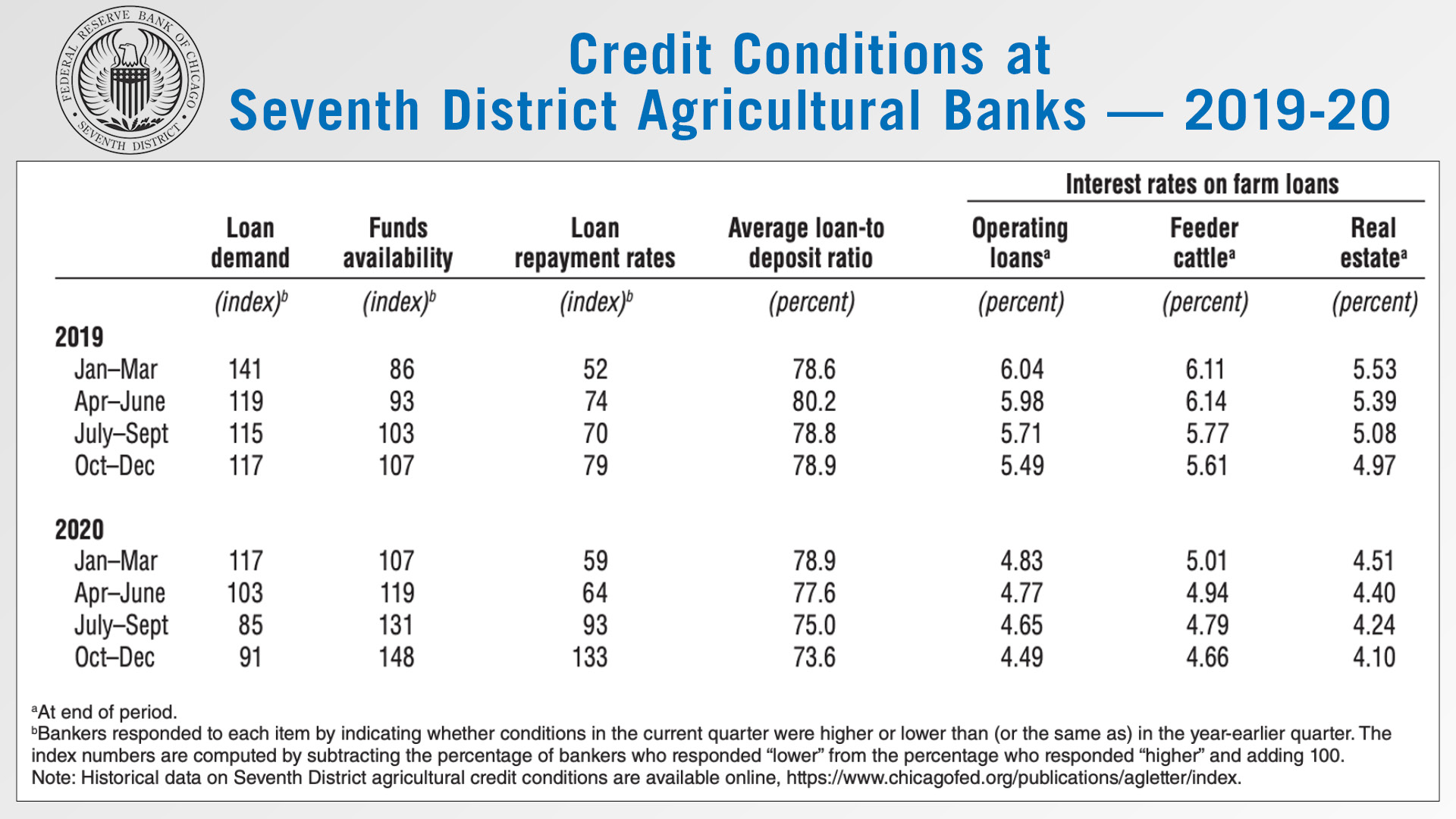 With 38% of survey respondents reporting higher rates of loan repayment and 5% reporting lower rates, overall repayment rates for non-real estate farm loans in the fourth quarter of 2020 were higher than in the same period of the previous year, which had not happened since the third quarter of 2013.

At the beginning of 2021, survey respondents indicated only 1.4% of their farm customers with operating credit in 2020 were not likely to qualify for new operating credit in the year ahead. This was an improvement from the percentage reported at the start of 2020. Farm real estate and non-real-estate loan volumes were projected to be larger in the first 3 months of 2021 compared with the same 3 months of a year ago.

Yet the mix of agricultural loan types was expected to change: Farm machinery and grain storage construction loan volumes were anticipated to increase. But the volume for operating loans was anticipated to be flat. At the start of 2021, bankers forecasting capital expenditures by farmers would be higher in the year ahead compared with the year just ended outnumbered those forecasting lower capital expenditures, reversing a trend of the past few years. One Illinois banker stated, “With the surge in commodity prices, I expect increased farmer spending on equipment upgrades.”

This week’s Dealers on the Move include Mazergroup and Riechmann Bros.

New Holland dealer Mazergroup announced it will close its Crystal City, Man., store and will consolidate it with its nearby Killarney and Morden locations.

John Deere dealer Riechmann Bros. will break ground on a new facility just a few miles from the original Breese, Ill., location that was built in 1988. The new 34,000 square foot facility is expected to be completed in late 2021 in time for the dealership’s 100th anniversary.

With ongoing shortages and delays in parts availability and shipping, precision and iron dealers are seeing opportunity to develop robust early order programs to roll out this summer.

But as we close in on spring planting in many areas, anxiety is building among some customers, dealers and even manufacturers as to the timely delivery of parts and technology to be installed, tested and ready to take the field.

Talking with a few precision dealers this past week, they cited rising commodity prices as a positive sign that farmers will have an appetite for attractive early-order programs this year — though the greater priority is making sure customers have back-ordered parts in time for spring.

Count Adam Gittins, general manager of HTS Ag in Harlan, Iowa, among those precision dealers keeping a close eye on the calendar. But for the last decade, the dealership has recorded and analyzed annual ordering to try and account for fluctuations in availability and delays.

Gittins acknowledges the last year has complicated the process more than usual, and forced dealers to be more discerning or aggressive with the timing and volume of their parts orders to meet current demand and forecast future need.

“We don’t normally stock inventory year-round, at least not in large volumes. But we’re able to ramp up, based on when we expect to sell the inventory and then look at our burn rate of that inventory and try to stay ahead of it a little bit to have some of those critical pieces when we do get closer to the decision. And when the customer is ready to buy, and we don’t have it, it kind of stops that sale’s cycle and it’s really hard to jumpstart it again.”

Share your plans for summer pre-order programs by participating in the new online poll at FarmEquipment.com and look for more coverage of the topic coming in the April/May issue of Farm Equipment magazine. 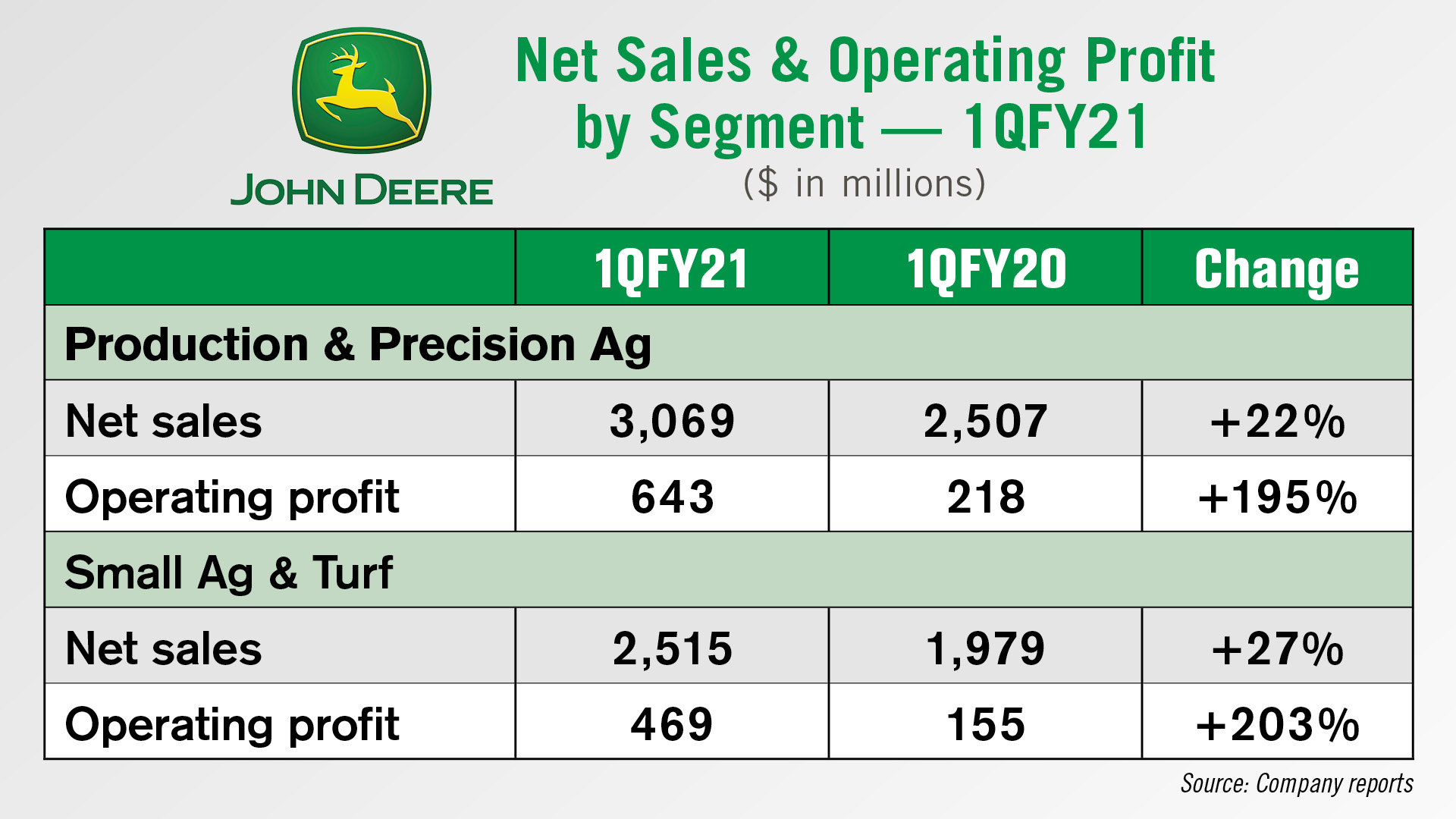 Production & precision ag sales were up 22% in the first quarter to $3.1 billion due to higher shipment volumes and price realization. Operating profit in the segment was up 195% to $643 million. 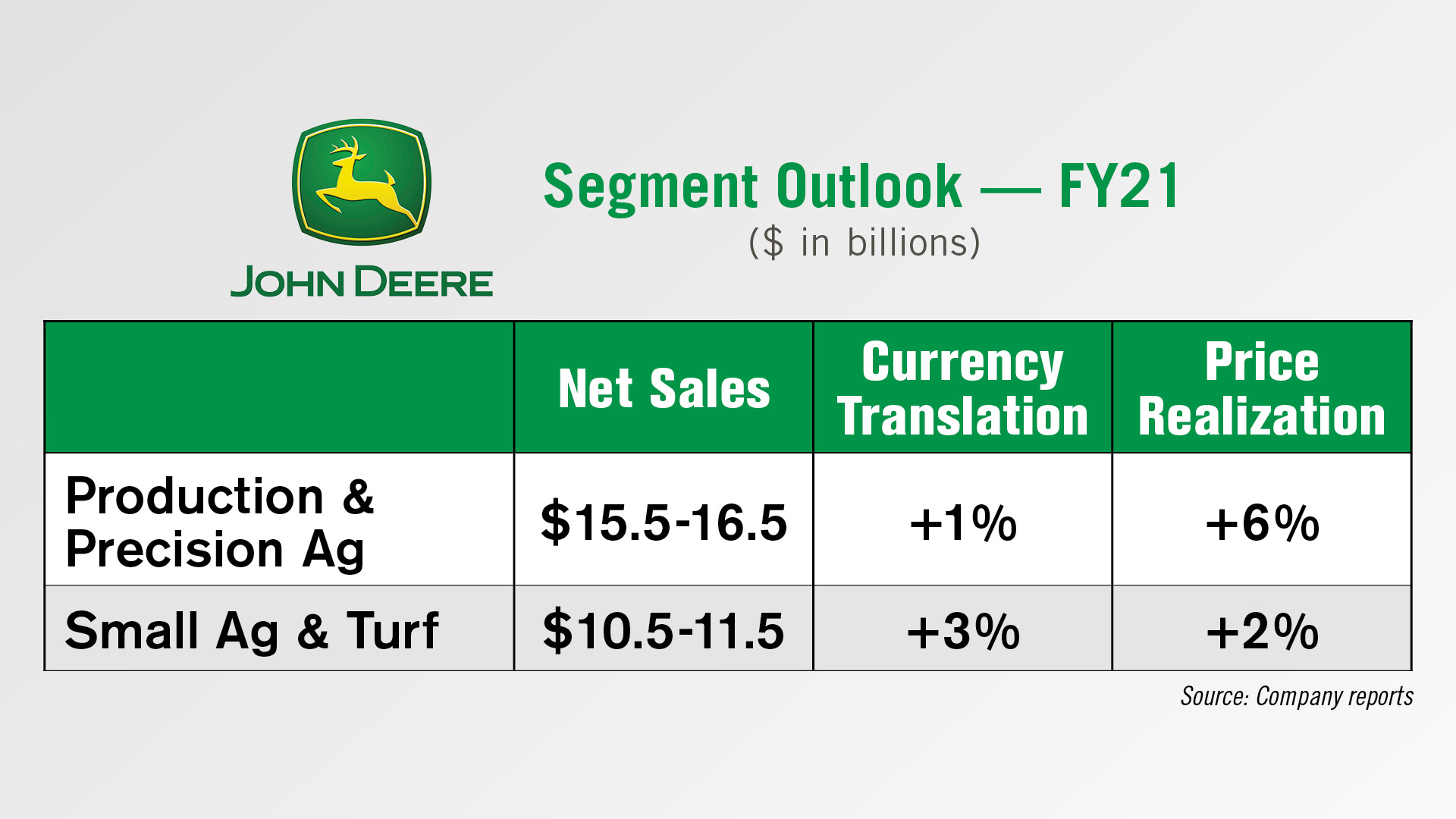 Looking at the year ahead, Deere forecast production & precision ag net sales to be between $15.5 and $16.5 billion dollars in 2021, while small ag & turf net sales are forecast at $10.5 to $11.5 billion. Both segments are expected to see a percentage increase in currency translation and price realization.

For its fiscal year 2020, Kubota reported total revenue of $17.6 billion, down 3.5% from its fiscal year 2019. Domestic revenue was down 4.8% to $5.7 billion, due to a decline in machinery revenues following the spread of COVID-19. Overseas revenue was also down 2.8% to $350 million due to a decline in machinery revenue following delays in production and shipment. 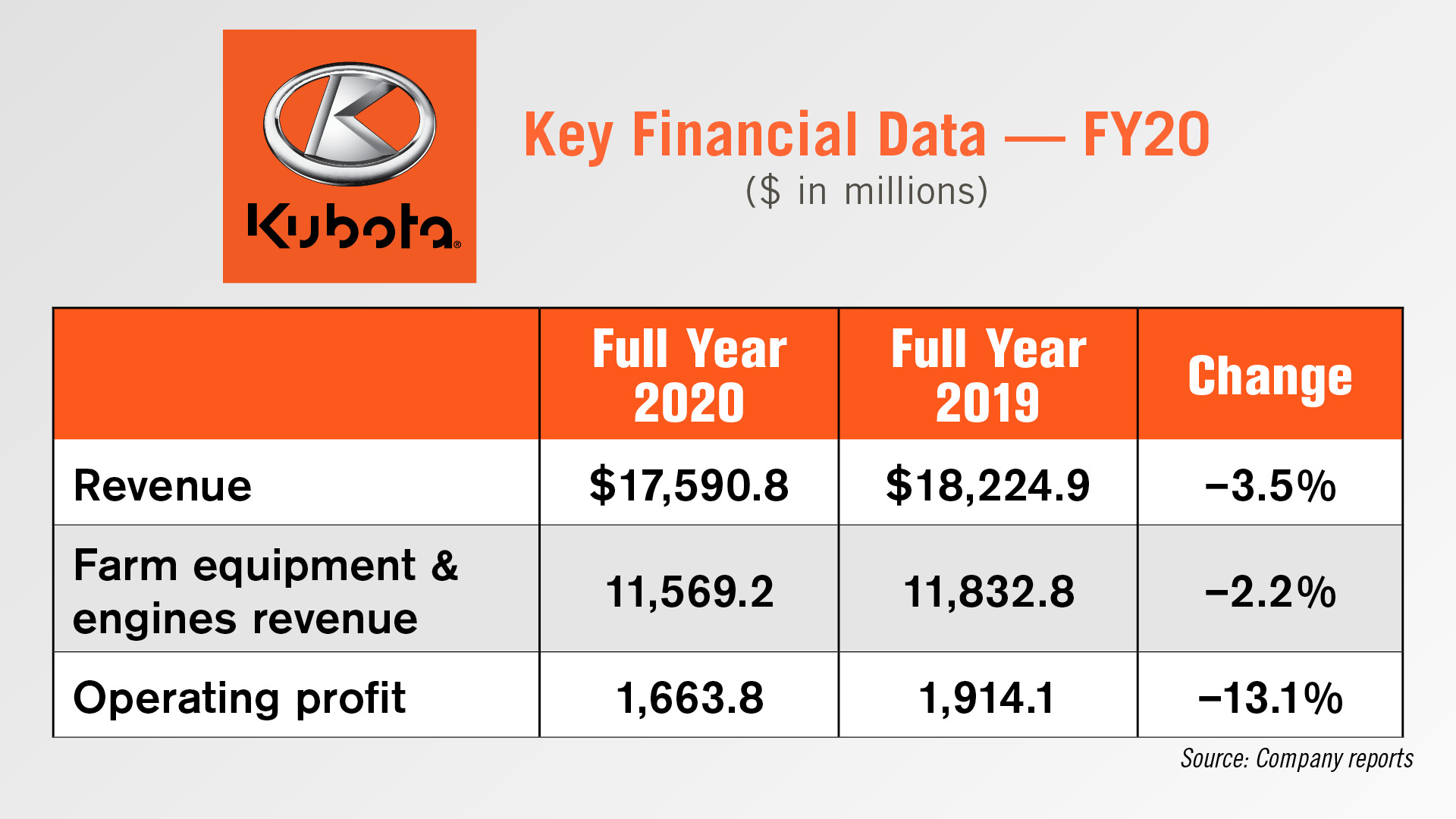 The company’s overall operating profit showed a 13.1% decrease to $1.7 billion. The decline was attributed to decreases in domestic and overseas revenues, as well as declining profitability from manufacturing bases due to temporary production halts. Total revenue from Kubota’s farm equipment and engines segment came in at $11.6 billion, down 2.2% from $11.8 billion in 2019.

Kubota pointed out that domestic farm equipment sales dropped significantly in 2020, in addition to a decline in overseas construction and tractor sales following a wholesales carryover into 2021 due to delayed production. This resulted in significantly declining overseas dealer inventories. 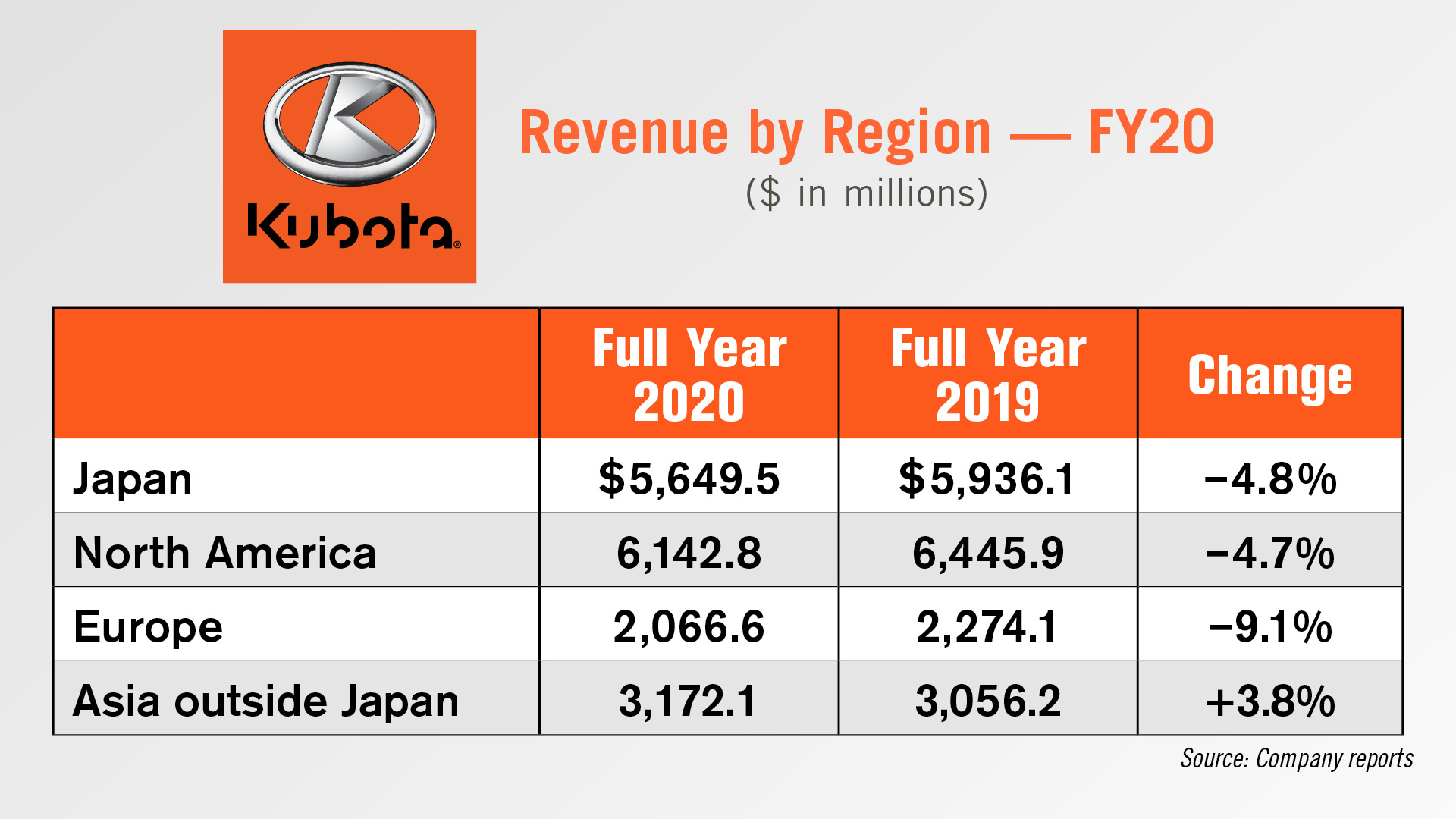 AGCO recently reported its Fendt brand achieved European market share of 10.6% in 2020, including gains in the German, French, Polish and Italian markets.

This follows AGCO’s efforts in the last few years to accelerate its rollout of the Fendt brand in the U.S. Fendt distribution in the states has expanded to over 200 locations, including some exclusive Fendt dealers. Former CEO Martin Richenhagen noted at a Fendt press event last fall that production of Fendt tractors was approaching 20,000 units a year, with expectations for that number to increase in 2021.

Fendt tractor registrations in Italy totaled 1,253 in 2020. For the 60 horsepower and above market, Fendt achieved a market share of 8.4% in 2020, up from 7.1% in 2019 and less than 5% in 2015. Fendt reported the market share increase was influenced by a stronger Fendt sales network for the Fendt Full Line program in Italy. 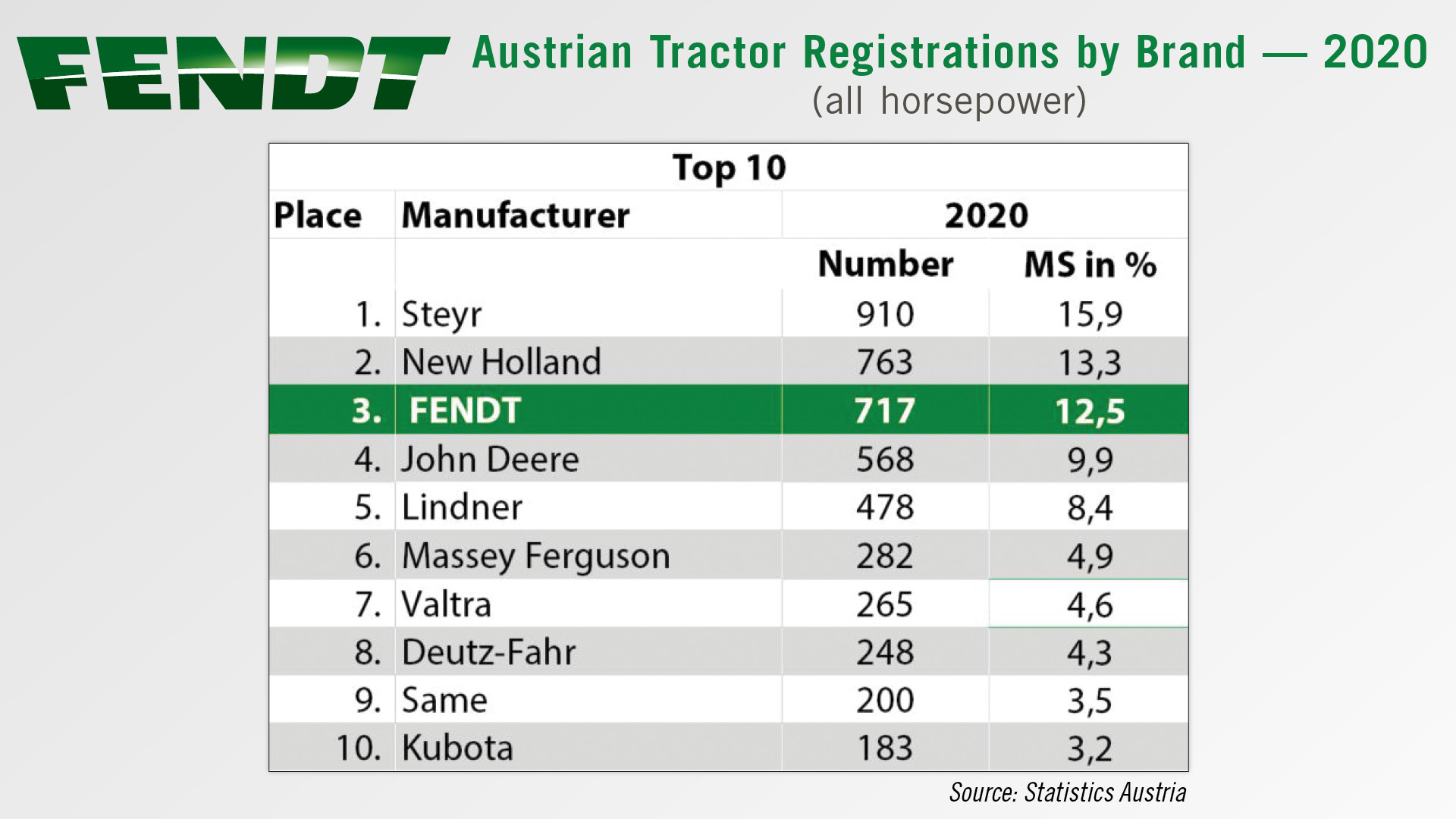 In Austria, Fendt showed 717 total tractor registrations and a 12.5% market share in 2020, up 2.3 percentage points year-over-year. This gave Fendt the third largest market share in the country, behind New Holland at 13.3% and Steyr at 15.9%.