In this week's episode of On the Record, we dissect the leadership changes that have taken place over the last 12 months at CNH Industrial and Case IH. In the Technology Corner, Jack Zemlicka will take a look at when we might see blockchain in agriculture. Also in this episode, Deere & Co.'s first quarter results, a look at 2018 ag equipment sales and last year compared to 10 year averages and how some technology used by NASA could be helping farmers.

Another Shift in Case IH Leadership

The past year has been tumultuous for CNH Industrial and Case IH in terms of the turnover of its leadership teams. The latest announcement, bringing back Brad Crews as the brand president of Case IH, is seen by people familiar with the situation as an attempt to calm dealer, employee and customer concerns about the continuous churning of top management at the ag equipment maker. At least nine major leadership moves involving top managers at CNHI and Case IH have been made since March 2018.

A person familiar with the situation told Ag Equipment Intelligence, “The changes at CNH caught the distribution network around the world off guard, especially at Case IH with retirements of Brad Crews and Jim Walker, as well as the departure of Andreas Klauser. It also appears that Case IH employees were also very nervous.”

They go on to say they, “think the move to bring Crews back was clearly aimed at providing leadership familiarity, especially in North America, to the distribution and employee groups. I understand that Brad still resides in the Racine (Wis.) area.”

Crews retired from CNHI in October 2017. At that time, he was the chief operating office for CNHI’s North American Operations and president of its agricultural segment. In total, Crews had worked in various positions for the company for 23 years. During his abbreviated retirement he served on the Board of Directors of Titan Machinery, one of CNHI’s largest dealership groups. 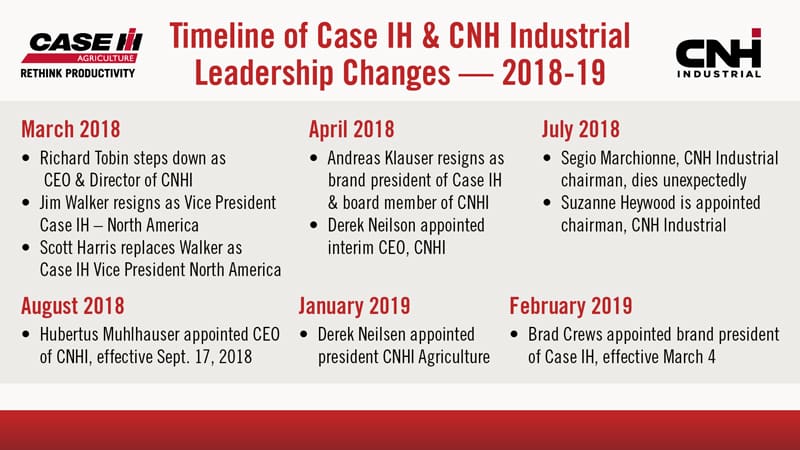 In an email to Ag Equipment Intelligence addressing the Crews announcement, Harris said, “I think it’s pretty straight forward. He [Crews] is a seasoned executive who knows our Industry, brand, network and customers intimately. We’re excited to have him back on the team.”

You can go to www.AgEquipmentIntelligence.com for a full report on the top management changes at CNH Industrial and Case IH.

With equipment automation and data connectivity areas of trending importance for manufacturers, at last week’s National Farming Machinery Show in Louisville, we invited companies to offer a perspective on how and when blockchain will emerge in ag.

While still a vague concept for some — others see more defined entry points and intersection with the industry.

Doug Applegate, CEO of Praxidyn, has been working with Ag Gateway, a collaborative non-profit organization focused on improving digital ag practices, on traceability, tracking grain from the field to the processor and within the last year, tracking chemistries used on those fields.

“Blockchain is getting more traction in ag. We’re seeing it first in the fruit and vegetable markets, which is logical. There’s been the ability to track those crops, but blockchain gives the credibility to the tracking because it’s a distributed database that is virtually impossible to tamper with. And so it gives credibility. It gives trust to a system and really, that’s what it’s all about, is the consumer trusting the supplier. That’s what blockchain does. It gives you trust that things are not tampered with that the data is not tampered with.”

Recent market reports suggest that the global blockchain technology market in ag could grow by more than 50% during the next 5 years, with the primary barrier to expansion being information security. 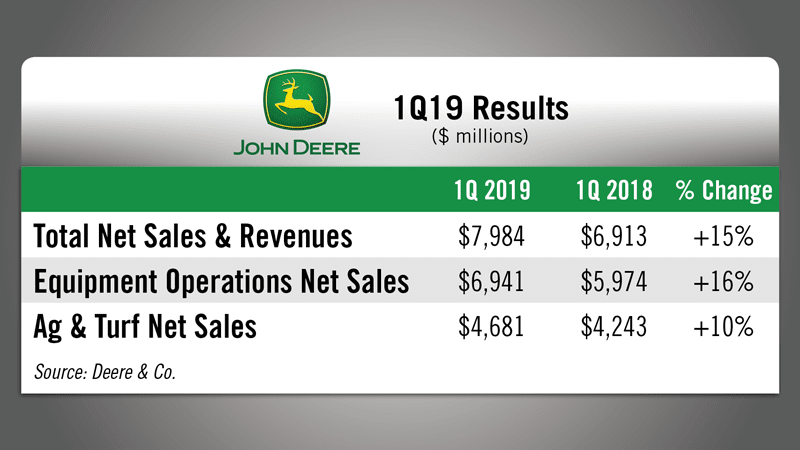 Agriculture & Turf sales for the quarter increased 10% to $4.7 billion.

Mig Dobre, an analyst with Baird, says Ag & Turf saw some impact from trade uncertainties, but notes they view it as only a temporary setback. He also notes that Deere dealers have reported “a lot of traffic and strong quoting activity, used equipment prices remain robust and a trade resolution with China should release demand building from the ongoing replacement cycle.”

In his year-end report, Deere’s chairman and CEO Sam Allen said the ag and turf division’s operating profit climbed to $2.8 billion in 2018, or a 12% increase over 2017. He said the strong performance was the result of better market conditions, fueled by replacement demand for new equipment, as well as customer enthusiasm for innovative new products featuring the latest precision technology.

Ag Equipment Sales Pick Up in 2018

North American sales of farm tractors and combines in 2018 improved year-over-year in each equipment category.

According to full year 2018 sales figures released by the Assn. of Equipment Manufacturers, more than 169,000 compact tractors were sold in the U.S. and Canada last year. This was up 8.3% vs. full year 2017 and well above the average annual sales of 122,550 units sold during the past decade. 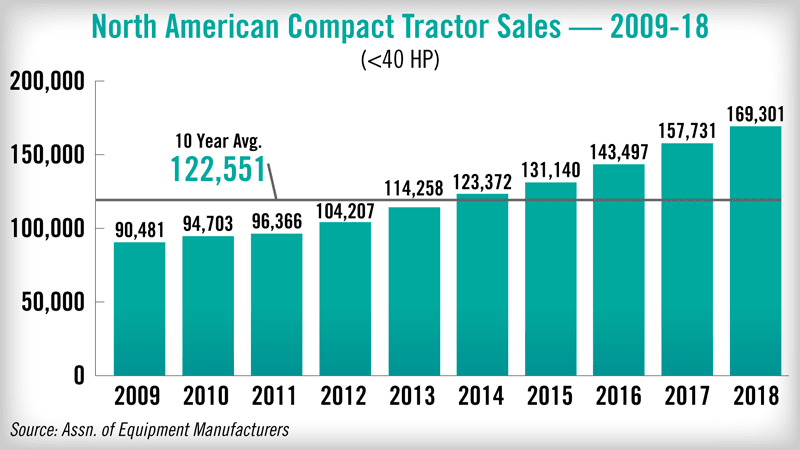 For mid-range tractors, total unit sales reached 66,500 last year, a 1.3% gain over full year 2017, Sales levels in 2018 also surpassed 62,400 average annual sales for this tractor category during the past decade. 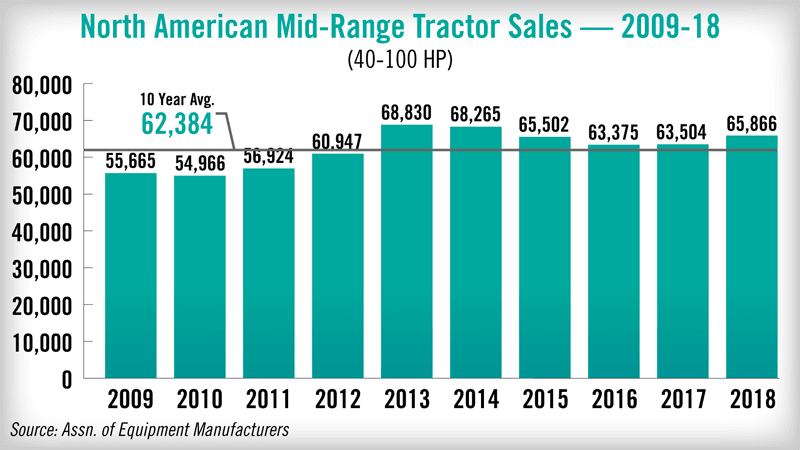 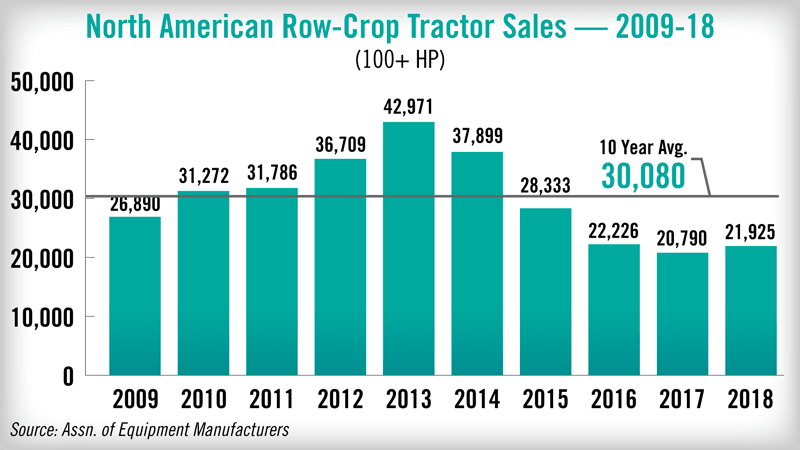 Sales of 4WD farm tractors have averaged nearly 5,800 units in the past decade. For the full year 2018, a little over 3,600 4WD units were sold, which were 5.3% higher than the previous year, but significantly below the 10 year average. 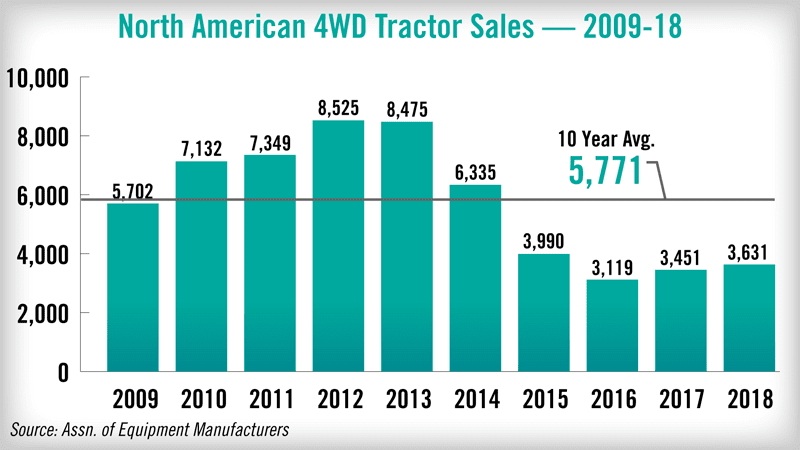 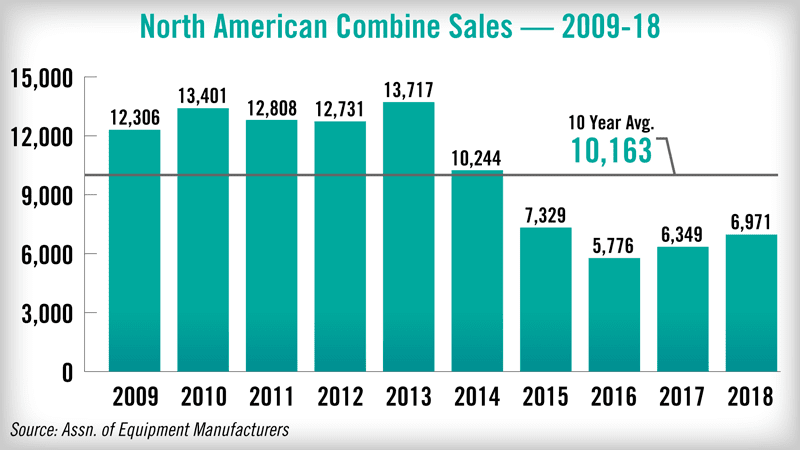 Bridenstine says through their research NASA has found ways to help farmers reduce their water usage, protect nitrates and get better results out of their land.

In the early 1950s, Allis-Chalmers began experimenting with fuel cell power. Those experiments resulted in this experimental tractor, which used 1,008 fuel cells to send 15,000 watts to an electric motor and could pull a weight of 3,000 pounds. In October 1959, the tractor plowed a field of alfalfa with a two-bottom plow and produced no heat, smoke or noise. 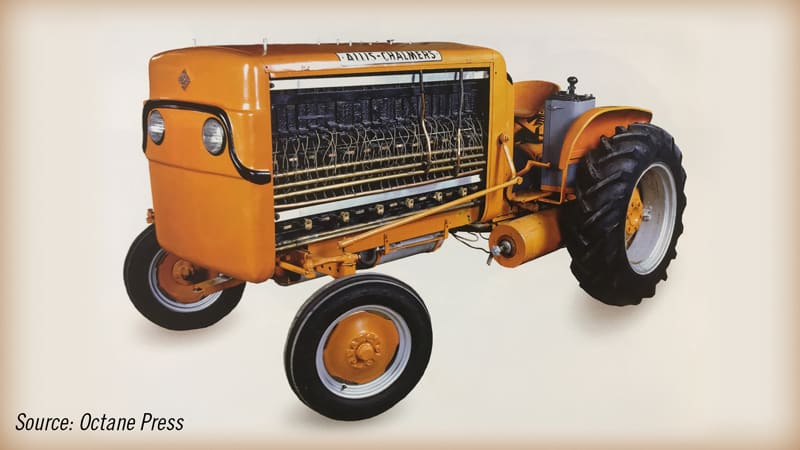