The latest episode of Ag Equipment Intelligence’s On the Record is now available! In this episode, we explore CNH Industrial’s steps into making 3-D printing for ag parts a reality, current and future trends in precision farming and how Dot Technology is making autonomous farming a possibility. Also in this episode, we discuss the latest earnings reports from Titan Machinery, Kubota Corp. and Art’s Way Mfg.

The possibility of 3-D printing replacement parts for ag equipment has been talked about over the last several  years. Now, CNH Industrial is ready to make it a reality. The company has taken a significant step in the implementation of Additive Manufacturing technology by producing its first 3-D printed parts.

3-D printing is the process by which components are created from a digital file to build layers of material under computer control. Once printed, each part undergoes stringent testing to ensure it meets CNH Industrial’s requirements and specifications.

Panpelei says while he doesn’t foresee dealers 3-D printing parts in-house, he does say the technology will still improve the time it takes dealers to get parts.

“What could be an opportunity for the dealers and ultimately for the end users too, is that we can provide the parts for the life cycle of the machine in a very short time. And at a cost that is going down more and more. If you follow the cost trend of the parts, it’s...” “...going down. So, instead if you think from an industrial point of view, if you want to produce the plastic parts that are 30 years old, then you have to set up the tool, you have some added cost on top of the parts itself the making probably the business case...” “...or the value proposition not really possible for anybody. Instead, with the 3-D printing, the way I see today is that you always have the parts available. One piece in 5 days to 10 days for any customer that needs the parts outside.”

This week’s Dealers on the Move include Torgerson’s, 4 Rivers Equipment and Everglades Equipment.

Montana-based Case IH and New Holland dealer Torgerson’s has acquired New Holland of Belgrade in Belgrade, Mont., moving the dealership up to 9 locations in the state.

4 Rivers Equipment, a John Deere dealer, announced it will be opening a new service location in Albany County, Wyo., this month. This is the dealerships second Wyoming location and brings its total location number to 16.

The types of ag technology that manufacturers are developing, dealers are selling and farmers are adopting is changing. A combination of factors are contributing to the evolution, including market instability, commercial momentum for increased machine automation and more connectivity with technology.

So how will the priorities of today shape the innovations of the future?

I had the opportunity to chat with Steven Fisher, executive director and senior analyst with UBS Investment Research, who is researching current and future trends in the precision farming business.

One area we touched on was how other industries are influencing ag technology and why consolidation will likely continue among tech developers, particularly as companies try to establish themselves on the ag data side.

“I think there's likely a big round of consolidation of some technology companies and part of what I've been thinking is if they're not and some will just continue to pursue their own paths, that could end up being disruptive to some of the major OEMs. So, they need to have a skill set the — legacy companies — in figuring out where the right companies are to put your money. How do you beat out the competition to get those technologies and know the right time to do it.”

Fisher adds that different data analytics providers, and connectivity related companies are trying to figure out exactly where they fit in and how they differentiate themselves to be a sustainable player in what is still a narrow slice of the overall ag business.

Segment sales for the full year included agriculture up by 5.4%, construction up 2.8% and international up 11.4%. Overall, equipment sales increased 7.6%, parts sales grew by 3.7%, but service declined by 2.2% and rental and other fell by 2%.

Titan Machinery said it is looking for flat sales revenues for ag equipment in its 2020 fiscal year. The dealership group sees construction equipment sales up 0-5% and international revenue up 10-15%.

Dot Brings Autonomy to the Field

On March 27, industry leaders, implement manufacturers, farmers and futurists gathered at the University of Arizona — Maricopa’s Research Facility for an introduction to the Dot Autonomous Platform. We spoke with Rob Saik, CEO of Dot Ready Retail, about the latest advancements Dot has made and the announcement of its newest partner, New Leader, a manufacturer of broadcast spreaders.

The event showcased some of the technology partners involved creating the Dot Autonomous Platform, including Cummins and Raven Technologies.

Dot, launched in 2017, is the visionary product of Norbert Beaujot, founder of Seedmaster and president of Dot Technology. The patented Dot Autonomous Platform is an early entrant in the field of autonomous farming and arguably the first with retail units available, with units already sold in Canada.

Increased revenues from its Farm & Industrial Machinery division along with a reduction in its income tax expense for the year helped fortify Kubota’s 2018 earnings. 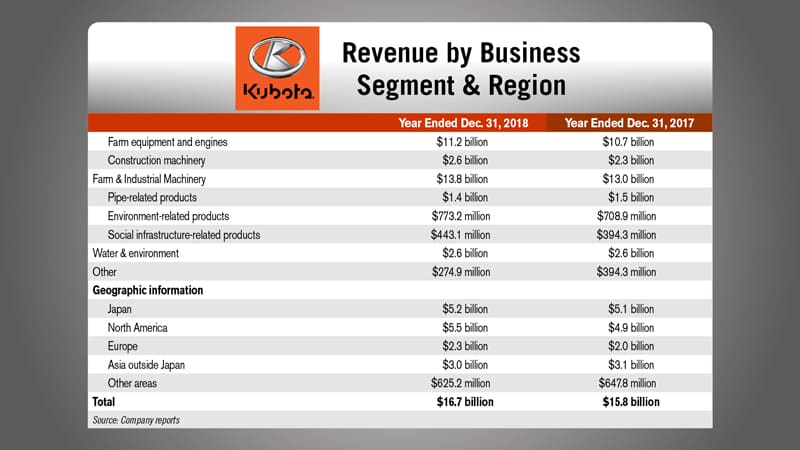 Revenue from the Farm & Industrial Machinery segment increased by 6.3% from the prior year to $13.8 billion and accounted for 82.6% of consolidated revenue. Domestic revenue in this segment grew 4.9% from the prior year to $2.8 billion due to increased sales of farm equipment, agricultural‐related products, engines and construction machinery. Segment sales overseas improved 6.7% vs. 2017 with North America tractor sales increasing “due to continuous expansion of demand,” the company said.

Kubota also said, “Income tax expenses decreased by $217 million from the prior year’s $442 million, in large part due to the federal corporate tax rate cut in the U.S.,” the company said.

Shortline manufacturer Art’s Way reported its first quarter financial results on April 8. For the quarter ending Feb. 28, sales were $4.1 million compared to $5.4 million for the same quarter in 2018. That is a drop of 23.1%. 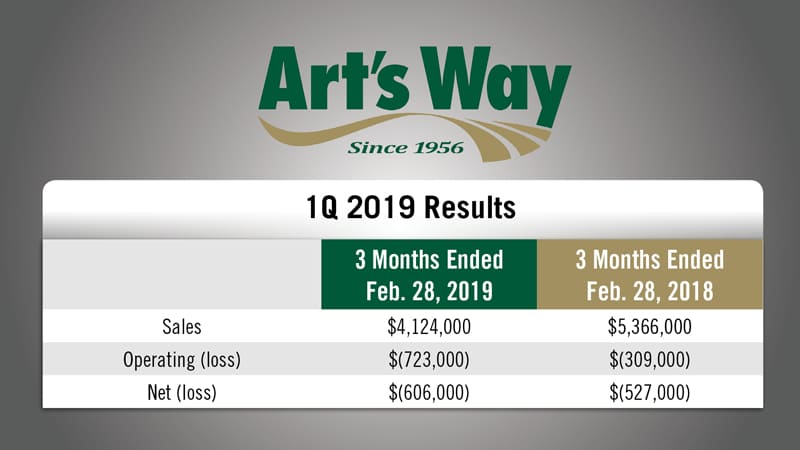 According to Art’s Way managers, the decrease in revenue is due to decreased demand across the grinder, manure spreader and OEM blower product lines and the liquidation of the company’s Canadian subsidiary from its agricultural products segment. Some of the declining demand was also due to economic factors such as commodity prices and price increases resulting from increased material costs, mainly steel. Also, in 2018 Art’s Way sold off aged manure spreader inventory at decreased margins, which led to lower sales of manure spreaders in 2019. 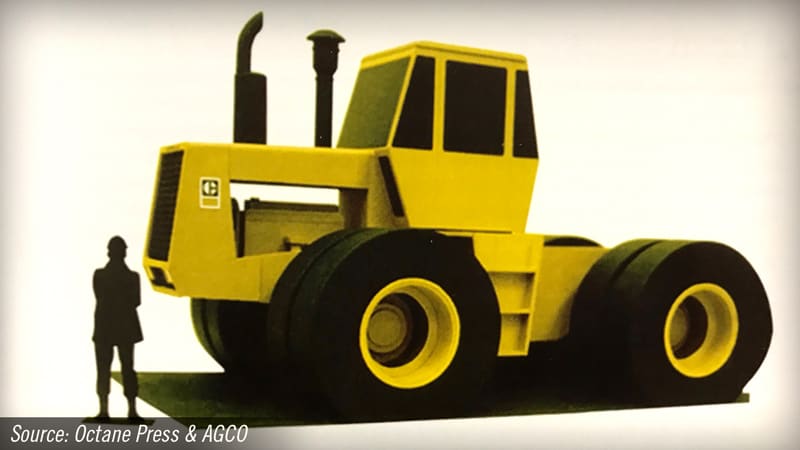 In the late 1970s, Caterpillar had been selling a limited number of Special Application crawlers to farmers. The high-horsepower, articulated, 4WD tractors were eating into demand for those crawlers, so Caterpillar executives decided to develop their own 4WD agricultural machine.  But, with the wheeled tractor virtually ready for production, executives canceled it in favor of a belted tractor after evaluating its potential, much to the surprise  of many engineers who had been working on the wheeled tractor.