The latest episode of On the Record is now available! In this week’s episode we take a look at Ag Equipment Intelligence’s 2020 Dealer Business Outlook & Trends report, specifically examining what dealers said were their “Best Bets” for upcoming year, along with concerns over the rising price of new equipment. In the Technology Corner, Jack Zemlicka discusses dealers’ hiring plans for precision farming specialists in 2020. Also in this episode, the Dallas Federal Reserve Bank reports farmland values are holding steady in the 11th District, African Swine Fever’s potential impact on U.S. ag and equipment sales, and an update on the hemp market.

While dealer optimism about their business prospects for 2020 is down slightly from a year earlier, they still see opportunities for increased sales in the year ahead.

Topping this year’s list of “Best Bets” is lawn and garden equipment. Nearly one-half of the dealers — 49% — responding to Ag Equipment Intelligence’s 2020 Dealer Business Outlook & Trends survey ranked commercial and consumer products as their #1 Best Bet for the new year. 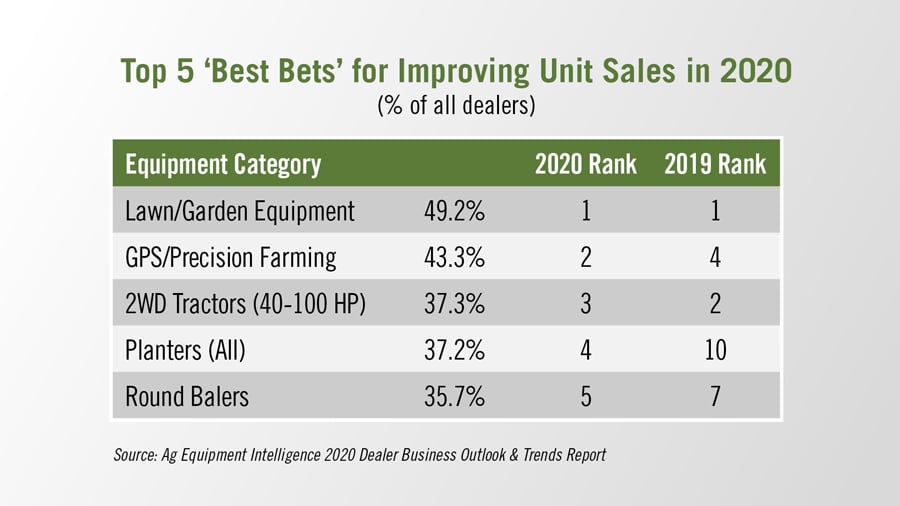 GPS and precision farming equipment jumped from #4 in the dealers’ ranking last year to #2 for 2020’s Best Bets list.

Rounding out the top 5 rankings of products and equipment with the most potential to increase dealers’ unit sales during the next 12 months are 2WD utility tractors, planters and round balers.

At the same time, dealers are concerned with expected price hikes for new equipment in 2020. The increasing cost of new equipment topped the dealers’ list of biggest concerns going in the new year. 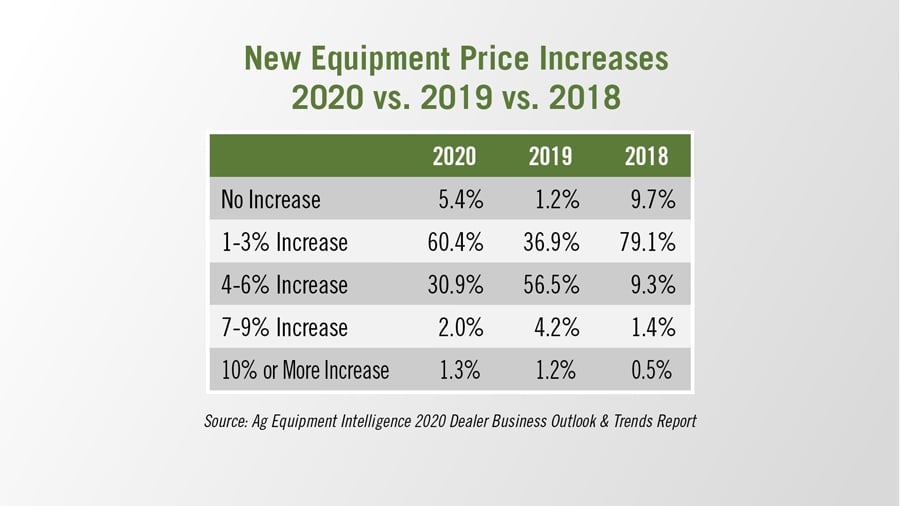 This week’s Dealers on the Move include Greenway Equipment, Sydenstricker and Wm. Nobbe and Heart Mountain Equipment.

Arkansas-based John Deere dealership Greenway Equipment has acquired Maus Implement. This adds 3 stores to Greenway’s operation for a total of 31 locations in Arkansas and southeast Missouri.

Powell, Wy., dealer Heart Mountain Farm Supply has changed its name to Heart Mountain Equipment and is now a full line Kubota dealer. It had previously been a Case IH dealer.

Finding and retaining precision farming talent has long been a challenge for equipment dealers, as many look to expand or evolve the scope of their business. While recent years have seen a slowdown in hiring plans, dealers plan to be more aggressive in adding precision specialists during the coming year.

According to Ag Equipment Intelligence’s 2020 Dealer Business Outlook & Trends report, 19% of North American dealers are forecasting an increase in precision specialist hiring, nearly a 2% increase over 2019 and nearly 7% increase over 2018. 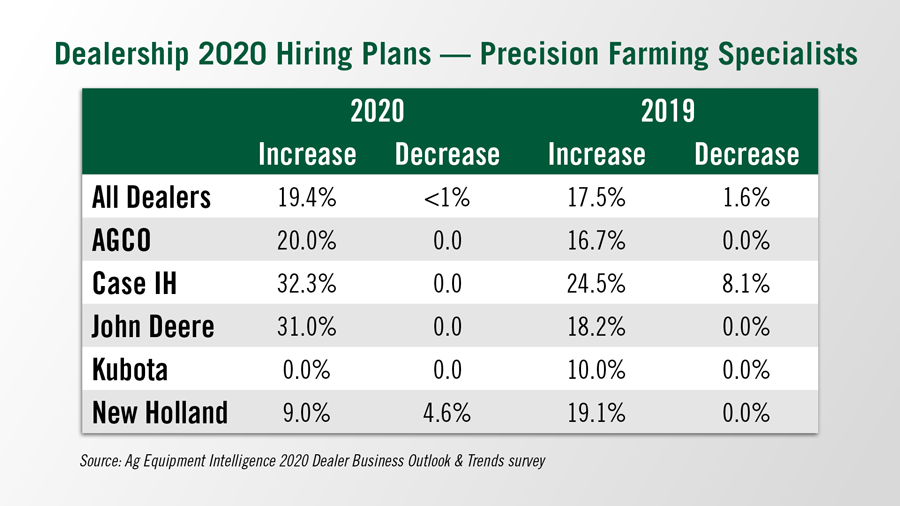 The report, which tracks hiring and revenue projections for the coming year,

reveals that dealers for 3 of the 5 major ag equipment manufacturers forecast measurable growth in precision farming hires in 2020.

For the second year in a row, Case IH dealers have the most aggressive precision hiring plans, with 32% forecasting an increase in staff, up from 24% in 2019 and 12% in 2018. Deere dealers were a close second with 31% anticipating precision staff additions in 2020, up nearly 13% over 2019 and representing the biggest year-over-year increase in hiring plans among the major manufacturers.

AGCO dealers also plan to increase precision staff with 20% of survey respondents indicating a desire to add precision personnel in 2020, compared to 16% in both 2019 and 2018.

Kubota dealers are also dramatically scaling back precision hiring plans in 2020, with none expecting to add staff. While the outlook represents a 10% decline from 2019, it’s consistent with 2018 study data when none expected to hire additional precision specialists.

While reporting overall weaker conditions across much of the Eleventh District, the Federal Reserve Bank of Dallas reports that farmland values held their own in the third quarter. 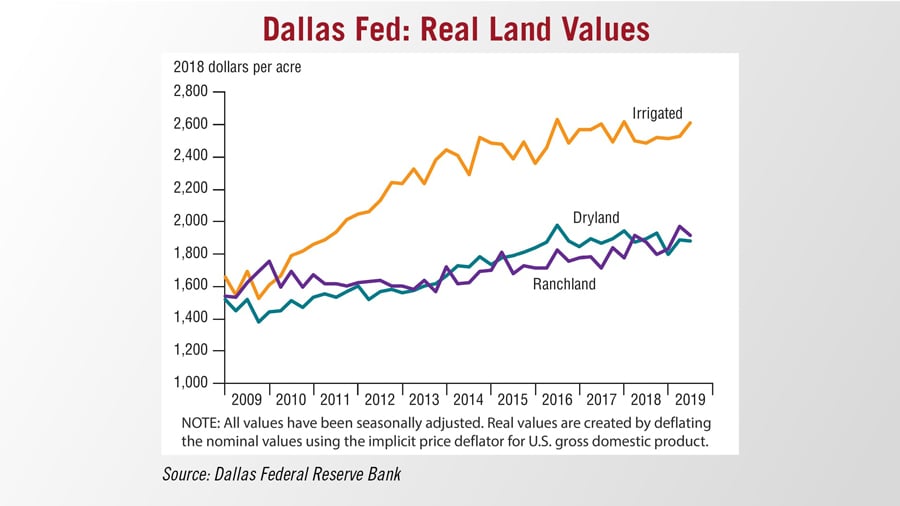 According to bankers who responded in both this quarter and third quarter 2018, nominal cropland and ranchland values increased year over year in Texas, northern Louisiana and southern New Mexico. 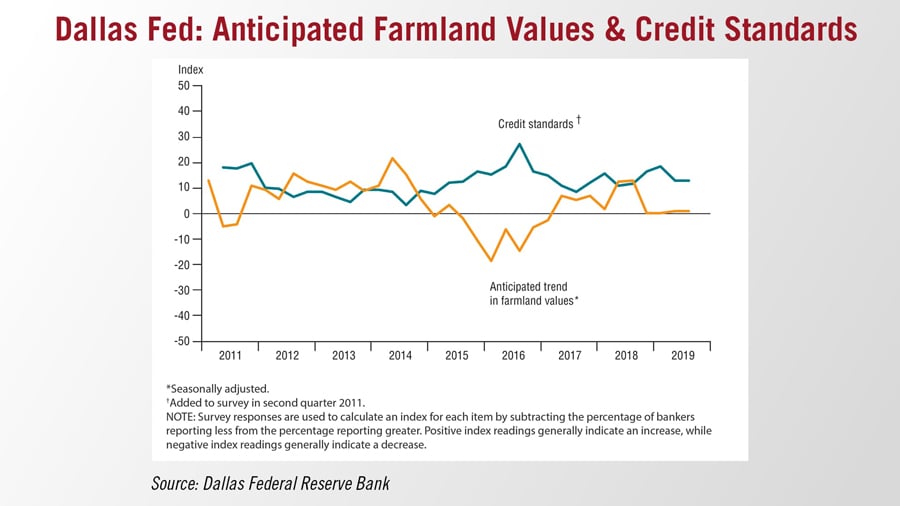 U.S. animal protein supply growth had been expected to slow in 2019. But, the impact of weather this year could mean growth in 2019 will match the 2.5% growth in supply seen in 2018, according to CoBank’s Quarterly U.S. Rural Economic Review for the 4th quarter. The impact of African Swine Fever is adding some extra cushion to the market as well. 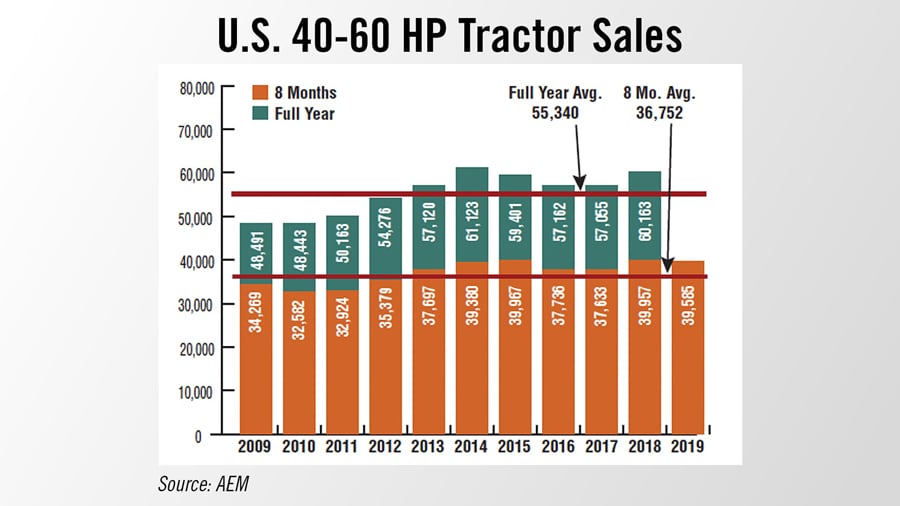 The ag equipment segment most likely to benefit from growth in animal protein are utility tractors in the 40-60 horsepower range.

The first cases of African Swine Fever were reported in China in August of last year, and it has since spread across Asia and Africa. It’s also present in eastern Europe. According to CoBank, the impact of ASF on global pork supplies is just starting to be felt in the U.S. animal protein sector. 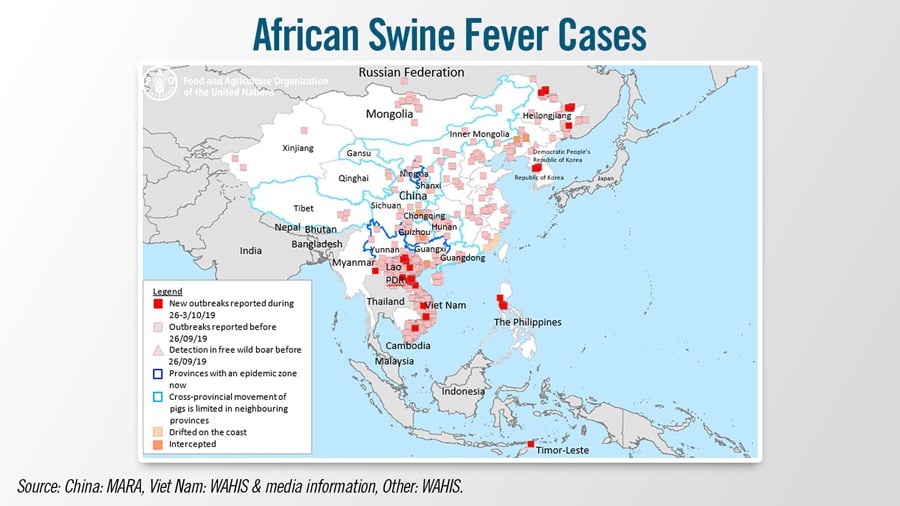 According to the report, “while prices have ridden a rollercoaster so far this year based on expectations, reality is now hitting. Trade volume is expanding and will begin to yield benefits to producers across the meat and poultry industries. The expanding trade volume, along with the signing of important trade agreements this summer with Japan and Mexico, will also aid in improving the sluggish level of trade flows so far this year. The new trade deal with Japan also lifts hopes of renewed exports, particularly for U.S. beef and pork.

Will Sawyer, a lead economist with CoBank specializing in the protein sector, spoke to dealers at the Moving Iron Summit last week in Nashville. He says U.S. ag could be a big winner.

According to Sawyer, the average Chinese consumer eats nearly 3 pounds of pork for every pound of chicken and beef. That means domestic producers of beef and chicken will struggle to fill the void.

He says, “Imports will play a big role in helping to keep animal protein available for China’s 1.4 billion consumers. The U.S. (closely followed by Brazil) is the largest exporter of animal protein in the world, accounting for about one quarter of the 30 million tons of protein traded around the world every year. This puts the U.S. meat and poultry sectors in a strong position to be a major beneficiary as China and other Asian markets ramp up their imports of all proteins. But even with the 7 million tons of protein the U.S. exports each year, it can’t keep pace with the supply gap caused by ASF.” 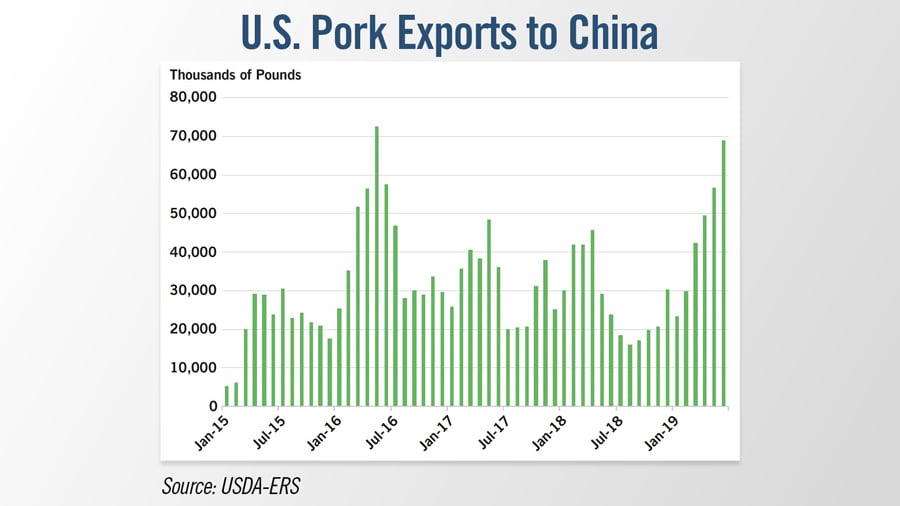 It remains to be seen how much farm equipment dealers and manufacturers stand to benefit, but with few bright spots in the ag economy, the potential for any market to grow is welcomed.

According to an annual survey from VoteHemp, a non-profit hemp advocacy group, 2019 saw considerable growth in planted U.S. hemp acreage compared to 2018. Over 16,000 grower licenses were issued across 34 states this year, and this translated to over 500,000 acres of farmland being approved for hemp cultivation. However, there’s still a way to go before hemp is a common American crop. 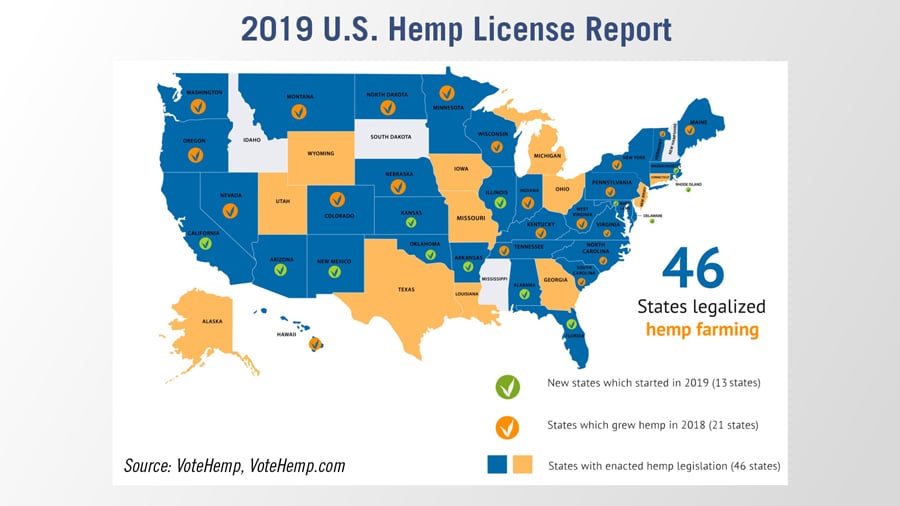 VoteHemp reported lower planted hemp acres and forecasted lower harvested acres, owing to both farmers’ lack of resources and general lack of experience. VoteHemp estimates around 230,000 acres of hemp were planted this year, which is expected to translate to between 115,000-138,000 acres of hemp at harvest. This represents a 47-76% increase over the 78,000 acres planted in 2018 but still just a drop in the bucket of total U.S. crop acreage. 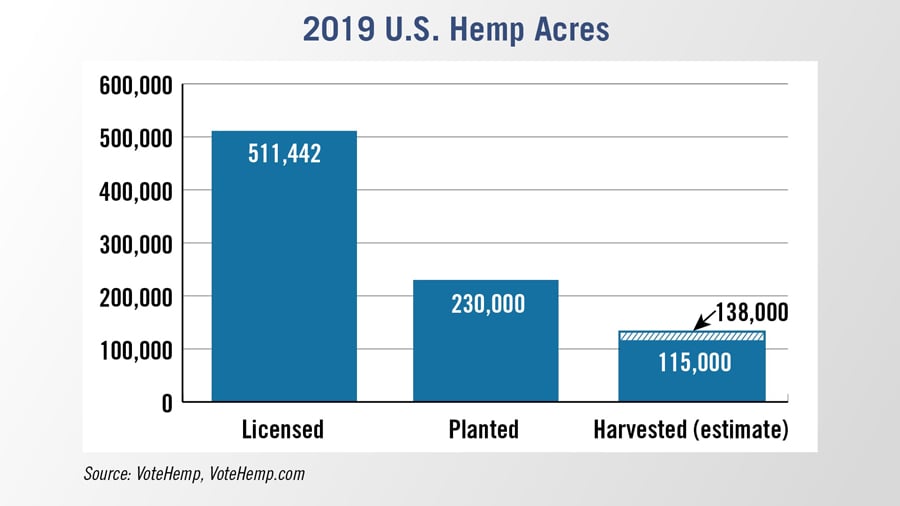 Growing pains, however, may soon be the least of hemp farmers’ worries. According to a report from HempToday, a price crash is forecast to hit hemp biomass prices before many can sell this year’s crops, which could severely damage hemp’s attractive high yields per acre and kill the crop’s popularity. 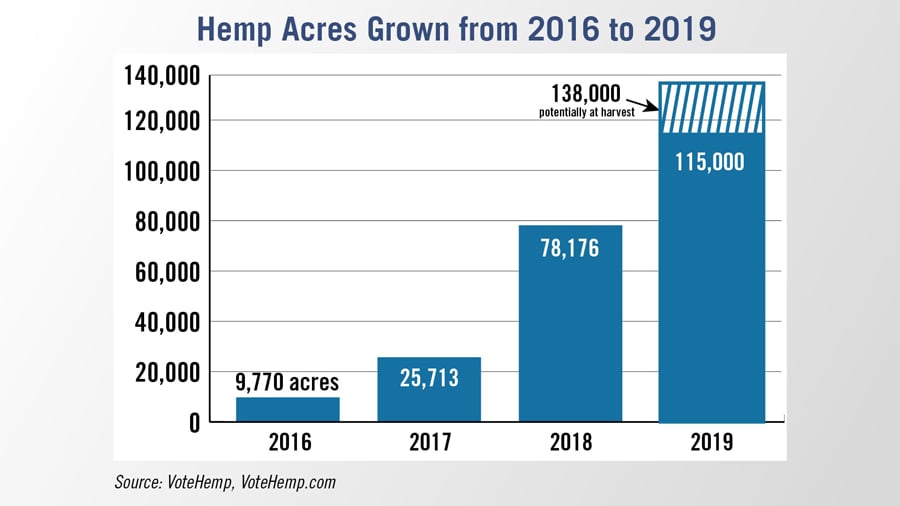 Kush.com, an online cannabis marketplace, reports the average price per percentage point of 10% raw CBD material was $3.94 in July and is expected to drop as low as $2.30 when early hemp harvests come in, with the potential to sink even lower through this month. Kush.com estimates the U.S. market is growing 8 times more hemp for CBD than can be consumed by the market. Case Nobles, CEO of Kush.com, said that many farmers are standing firm on the price of their crop even as trading prices decline, potentially accelerating the speed of the crash.

Everyone in agriculture knows that horsepower is a unit of measurement of power or the rate at which work is done. But do you know how the measurement came about? 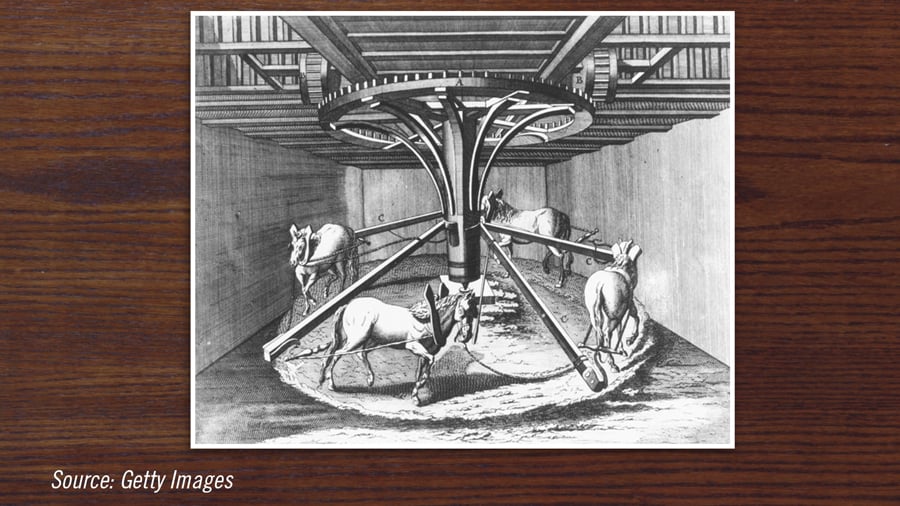 According to Popular Science, in 1781, James Watt needed to convince skeptics to ditch their draft horses and buy his new steam engine. To prove his machine’s superiority, he measured a horse walking in ­circles to turn a grindstone in a mill.

Watt originally defined it as the amount of power required to lift 33,000 pounds one foot in one minute, or 550 foot-pounds per second or 745.7 watts. Watt established the value for horsepower after he determined the strength of the average horse.

His new engine did the work of 35 horses, about the same as ­today’s ­riding mower. Today, horsepower is used to sell nearly every self-propelled vehicle, from farm tractors to F-150 jets.

As always we welcome your feedback. You can send comments and story suggestions to kschmidt@lessitermedia.com. Until next time, thanks for joining