Under 40 Horsepower Tractors — Monthly sales were 75 units above our original forecast and the year to date total was 2.5% above our forecast of November, 2017. 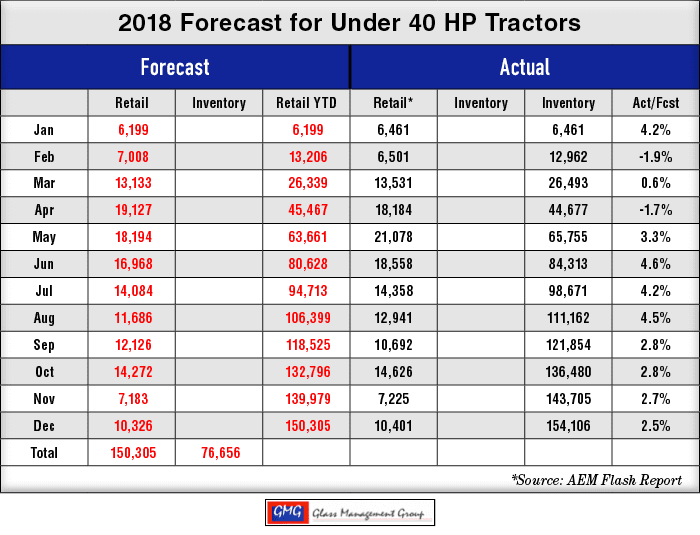 40 to 99 Horsepower Tractors — The monthly actual retail sales was slightly higher than our original monthly forecast and the year to date total came in at 4.8% above our forecast. 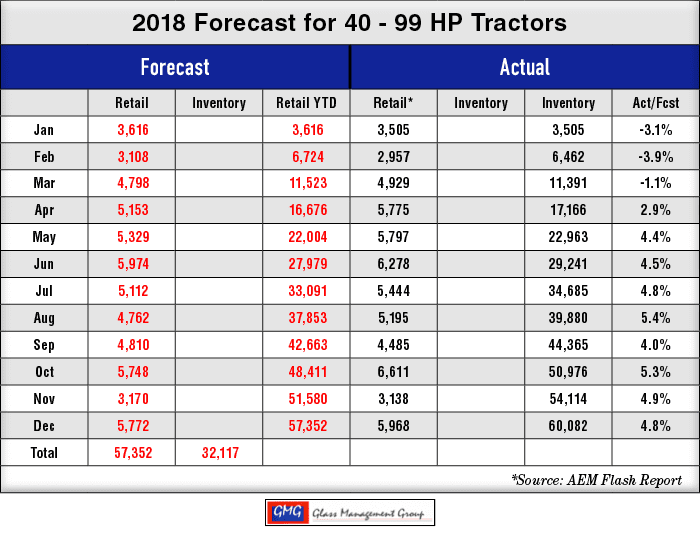 100 + Horsepower Tractors — This category was 48 units above our monthly forecast and the year to date total came in at 5.8% of our original forecast. 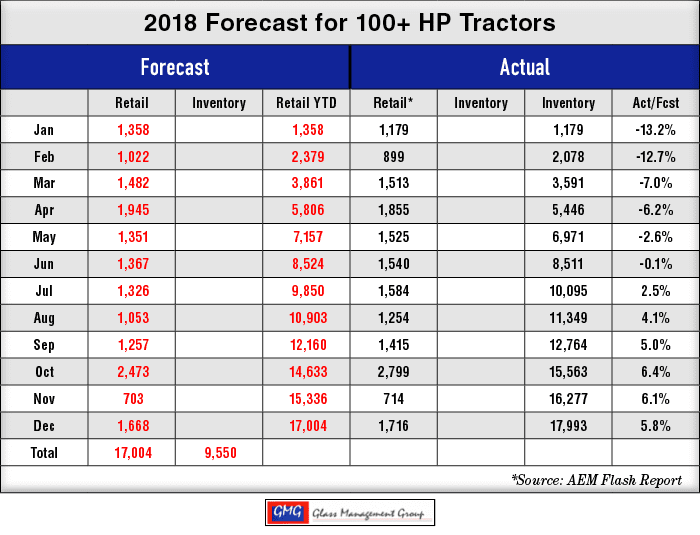 4WD Tractors — The monthly total for retail sales came in 9 units below our monthly forecasted amount but the year to date total was well ahead of forecast by 12.4%. 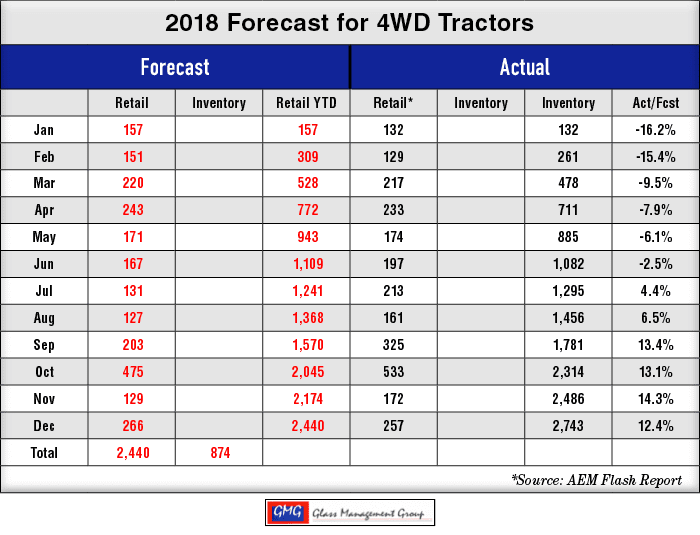 Combines — Retail sales for the month of December were very strong and the year-to-date total for this category exceeded our original forecast by 25.2%. 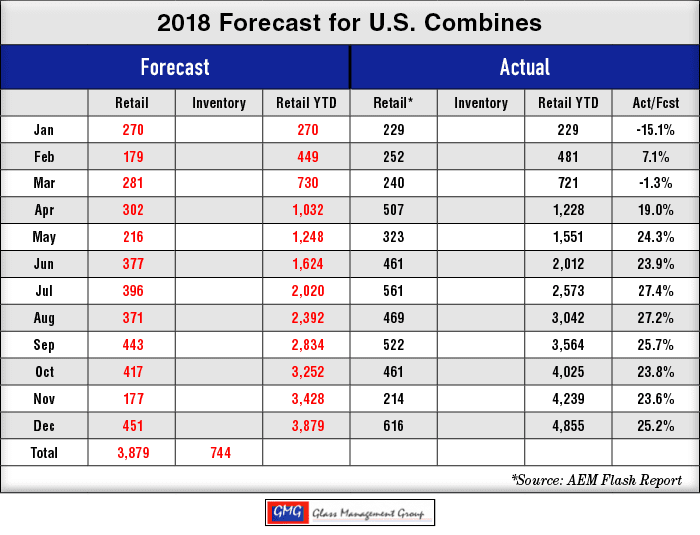 2018 is now in the history books! This time last year it appeared that it would be a difficult year but it has ended on a very positive note for U.S. equipment manufacturers and their dealers. There still remain some difficult situations to resolve and the most glaring of these is the matter of Sino-U.S. relations.  The U.S. tariffs and the Chinese counter tariffs have had a devastating effect upon the export sales of U.S. agricultural products, particularly soybeans.

The recent movements toward a possible solution came with the meeting of the Presidents of the U.S. and China at the G-20 meeting in Argentina last month. China promised to resume purchasing U.S. soybeans and other agricultural products and followed through with a nominal order. There continues to be negotiations between lower level staffers that have shown some signs of a positive move.

The firm stance that the current administration has taken has somewhat befuddled China since they expected the U.S. to perform as they had in the past and relent upon their demands.  The continued presence of the U.S. tariffs has had a negative effect upon the Chinese economy and their high-flying GDP growth has slowed by nearly 50% in the past year while the U.S. GDP growth has increased by nearly 50% during the same timeframe.

The problem for U.S. grain producers is the growing relationship between China and Brazil. Even though Brazil has demanded — and received — a premium price for their soybeans, China has been willing to pay those increased prices because they are still below the price they paid for the 2017 U.S. crops. China’s thoughts were to produce both political pressure and economic pressure on the U.S. with this relationship but they were not counting on U.S. countermeasures to overcome those efforts. Their timid reentry into the U.S. grain markets appeared to indicate their recognition of the less than successful results of their plans and this may soften the relationship between Brazil and China.

The U.S. does represent a significant market for the purchase of Chinese products and the reduced access to this market caused by the U.S. tariffs may be causing China to rethink their relationship with Brazil. Even when China was the largest purchaser of U.S. produced grains, they were buying soybeans from Brazil but that country cannot offer the opportunity to buy Chinese products at the same level as the U.S.

How does this affect 2019 agricultural equipment sales?

As the U.S. economy has continued its positive growth in 2018 with unemployment below 4%, positive job growth and growing salaries across the country, the Under 40 horsepower tractor category continues to shine. The question mark that hangs over this segment is the erratic movement of the stock market in recent weeks and the impact that it might have on IRAs and 401K accounts. As long as those accounts grow in value, there is a renewed confidence in buyers of these tractors and related equipment.

Price increases that resulted from the implementation of the steel and aluminum tariffs last year could have a dampening effect upon agricultural equipment sales in 2019. The recent China purchases have brought a glimmer of hope to grain producers and rising commodity prices are a welcomed sight. The question now facing these markets is, will the growth in commodity prices overcome the increases in equipment prices this year?

Our forecasting models currently see a modest growth in all tractor segments and in combines for 2019.

The U.S. harvest is practically done now with only isolated areas to be harvested. With the crop in the bins, farmers are now looking for an opportunity to sell that crop at any uptick in the markets.

Tractor and combine sales for 2018 showed a very good increase in nearly all categories and that growth will continue into 2019. Our models indicated growth above the normal replacement activity and that should provide for another good year ahead.

The weather in South America began to dry out in December and indications from Brazil show that their soybean crop will not reach the 120 million metric ton projection. This certainly does not mean that their crop will suffer but the bloom is off the high expectations that existed earlier. Any improvement in the negotiations with China will have a positive effect upon equipment sales in the U.S.