By Charlie Glass posted on January 13, 2023 | Posted in Analysis & Commentary

Under 40 Horsepower Tractors – The sale of tractors in this category certainly did not rise to our original forecast expectation due to unforeseen inflationary pressures on the U.S. general economy. 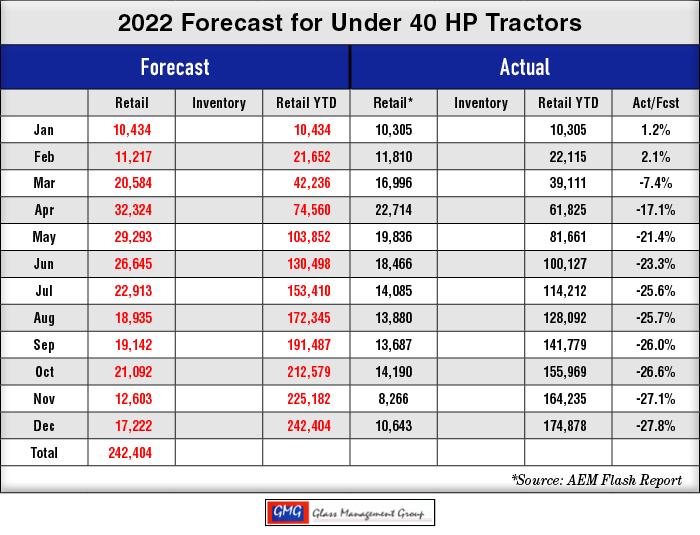 40-99 Horsepower Tractors – The majority of these tractors in this category was purchased by lifestyle farmers and was also susceptible to the inflation stricken general economy. 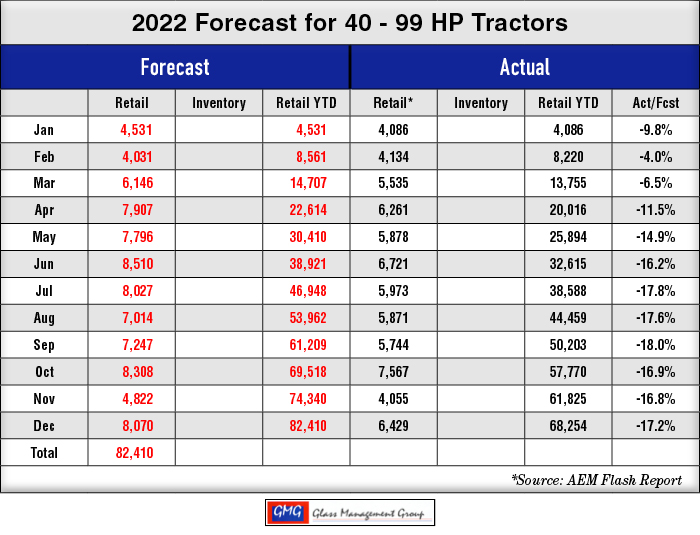 100+ Horsepower Tractors – Primarily purchased by production farmers, this category reacted to a positive net farm income in 2021 and came within 3.2% of our original forecast. 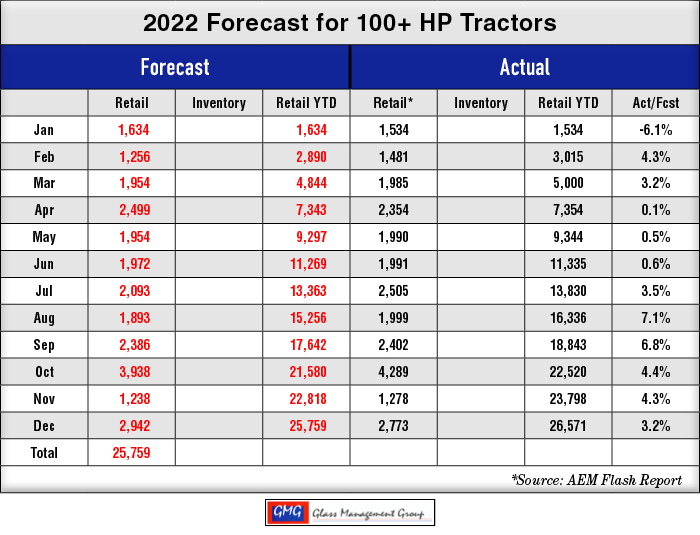 4WD Tractors – These very largest tractors had experienced strong growth in the past several years and with the positive net farm income of 2021 our forecast anticipated continued strong growth.  The market just did not agree. 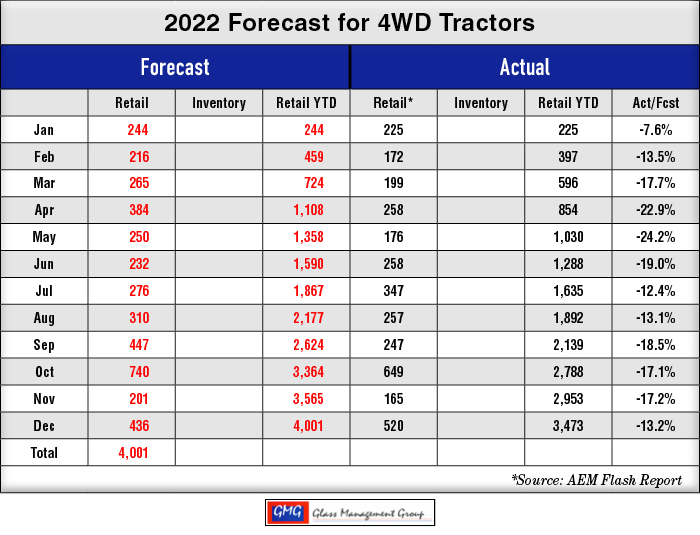 Combines – U.S. grain farmers continued to purchase combines at a very healthy rate in 2022 and the total retail sales exceeded our original forecast by 7%. 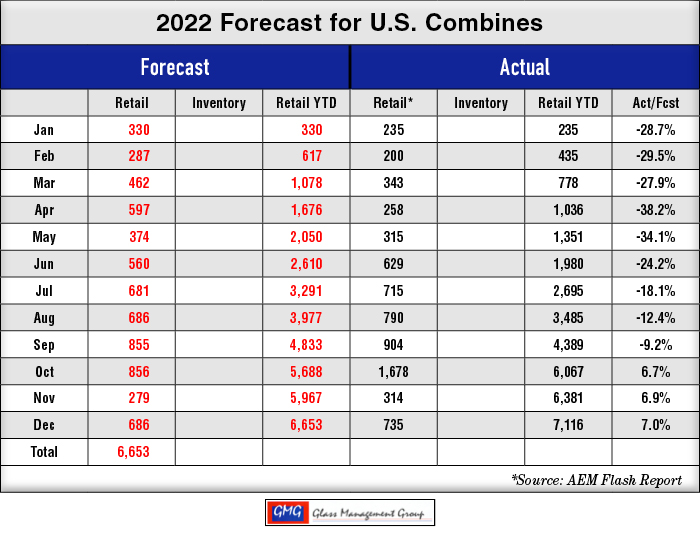 Another Year is in the Books

According to the 400 farmers surveyed each month by the Purdue/CME Group Ag Economy Barometer, things are looking up here at year end.  As farmers begin to assemble the data to begin closing their books for 2022 they realize that it was a pretty good year, after all.

The difficulty found within the December report was that many farmers found this was not a good time to replace tractors, combines and other equipment.  Tractors, in particular, were considered to be much higher in price than these farmers wanted to spend and there general consensus was to “wait until next year”.

2022 should be a good year in terms of Net Farm Income, a major harbinger of tractor and combine sales next year, but rising prices for seed, fertilizer, fuel and other inputs for grain farmers has put a damper on decisions for equipment purchases next year.

The recent rain in the middle section of the country has resulted in a greatly improved flow in the lower Mississippi River.  The drought of 2022 had reduced that flow and had restricted the traffic on the river in both directions.  The U.S. Corp of Engineers has estimated that for every reduced foot of draft would require leaving about 6,000 bushels of soybeans on the dock and for much of the year the river depth had been running around nine feet while a loaded grain barge would require about eleven feet of draft.

This has increased the cost of shipping grain down the Mississippi significantly in the past several months.  Nearly 60% of all U.S. corn and soybeans are transported down this vital waterway.

The impending railway strike has been averted by governmental actions but that is seen as a temporary solution and the prospect of a strike in the future still clouds the costs of shipping grains by rail.

Diesel fuel costs did continue to moderate during the month of December but the year cost is significantly higher that this time last year.  The vast majority of farm tractors, combines and other equipment is powered by diesel engines and that is a major concern for production farmers for 2023.

U.S. grain farmers, the largest segment to purchase farm tractors, combines and other equipment, have developed a positive feeling for 2022 but the prospects for ever increasing costs for their 2023/24 crop year has caused many of these farmers to take a very cautious view of equipment purchase next year.  Tractor sales typically are 3% to 5% of the total tractor population on U.S. farms and 2023 is trending to the bottom end of that range.

A large percentage of the higher horsepower tractors and combines are obtained through a lease agreement and those agreements have a finite ending date.   This has been a major driver for equipment sales in those categories.  Many farmers first purchased through a lease agreement because they could maintain the use of new equipment for a minimal cash outlay but now, after several years of leasing equipment, these same farmers realize that not only does it reduce their original cost but also reduced their maintenance costs for that equipment.  Leases are here to stay.

The U.S. general economy has been a primary driver for the sale of tractors under 60 HP and for the equipment used on those tractors and that has not changed for 2023.  What has changed is the inflationary pressures on the lifestyle farmers who have been the major purchaser of this class of equipment and 2023 is shaping up to be another year of growing inflation.

Our models continue to indicate minor to moderate growth in U.S. agricultural tractors, combines and other equipment in 2023.  Higher net farm income for 2022 will help to increase the number of replacement units sold for some of the smaller production farmers and our models are showing a more vibrant growth in the smaller horsepower tractors for 2023.

The closing commodity price for U.S. grain producers has produced new confidence in those farmers’ ability to produce a profitable crop this year.  The difficulty in shipping those crops from the field to their final destination is somewhat unexpected and has added additional costs to this year’s crop.

The battle against the inflation in the U.S. economy has resulted in increased costs for the nation’s farmers in almost every segment of their activities.  The drought of this past summer is now a fleeting memory as rains have returned to central portion of the nation.  Not only have those rains brightened the outlook for farmers, they have also begun to refill the water table and brought the promise of an easing in the cost of shipping grain for next year.

Strong international demand for U.S. produced crops have helped to maintain the flow of agricultural exports this year and provided hope that 2023 will not witness the additional shipping costs that many producers have experience this year.

Lifestyle farmers continue to be the primary purchasers of smaller horsepower tractors and equipment but an inflationary economy is pressuring their equipment purchases for 2023.   Our models are indicating a moderate growth rate in these smaller units over the number of units retailed in 2022.