Under 40 Horsepower Tractors —This category came in only slightly higher than our monthly forecast and remains 2.8% above our year-to-date forecast.

40 to 99 Horsepower Tractors — The strength in this category continues as the monthly number came in nearly 900 units above our monthly forecast and the year-to-date total was 5.3% ahead of our forecast for the first 10 months of the year. 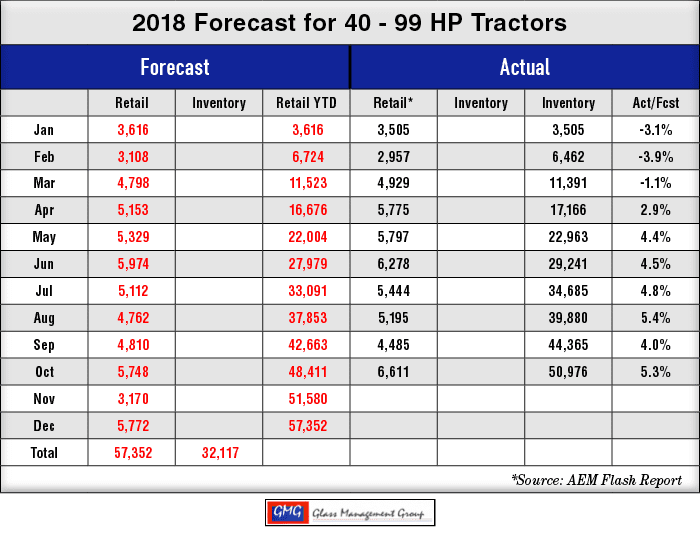 100 + Horsepower Tractors — The monthly results were 326 units ahead of our original monthly forecast and the year-to-date totals were 6.4% ahead of our forecast. 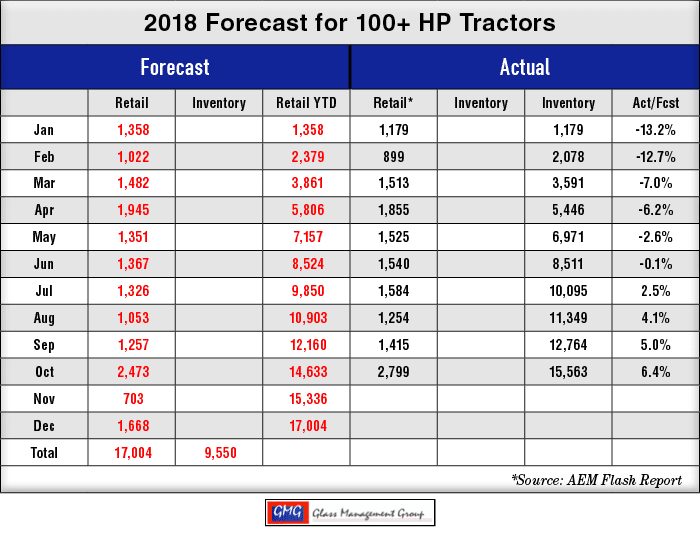 4 WD Tractors — This class of tractors came in 58 units ahead of our original monthly forecast and the year-to-date totals pulled back to 13.1% ahead of our forecast for the year so far. 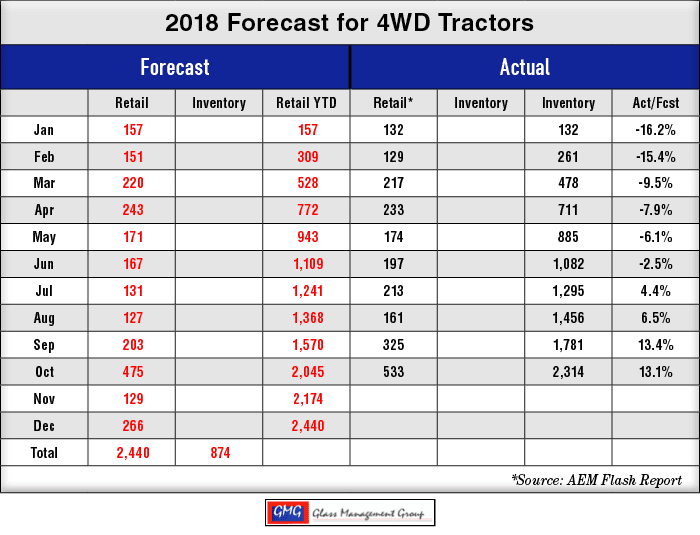 Combines — Retail sales came in 44 units ahead of our monthly forecast and the year-to-date totals were 23.8% ahead of our original forecast. 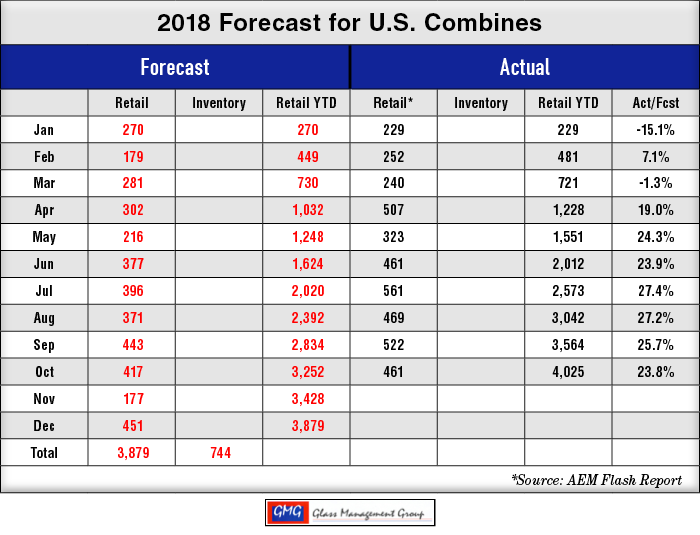 One political group pointed to the “rich farmers” in the U.S. receiving large financial largess from the government while another political group is touting farmers as pawns in the current trade wars whose income is reduced by political whims.

The fact of the matter is that politics have always had an effect upon the economy, including the agricultural economy, in the U.S. and 2018 is certainly no different. The question before us is which way will this election turn the economy? Commodity prices have certainly taken a negative turn since the initiation of the trade “discussions” and the impact upon those who are the ultimate purchasers of farm equipment is still very much in question.

The general economy continues to grow and that has certainly had a very positive effect on the sale of the smaller horsepower tractors and equipment as lifestyle farmers continue to prosper in these current conditions. Job growth continues its steady rise each month and increases in salaries for those employees are beginning to grow, as well. That is certainly a positive sign for those who manufacture and market products to lifestyle farmers and bodes well for 2019.

Consumer confidence has remained at a high level this year and even the recent fluctuation of the stock market has not created concern among investors. Fidelity Investments announced recently that more than 168,000 401(k) accounts held more than $1 million each and the average IRA balance has grown 36% since the 2016 general election.

For those farmers engaged in production agriculture (defined as those who generate a portion of their income from farm operations) have mixed feelings about the future. Input costs continue to rise while falling farm income is putting pressure on farm spending levels for all farmers. In spite of this negative activity, tractor sales for these farmers continued to move up during the year.

A growing economy and increasing demand for workers has had a positive impact on the majority of U.S. farmers. Any increase in household income for farmers will help to ease the impact of lower farm income for those who have jobs off the farm and that increased income could be used to purchase tractors and other equipment.

Farmers who derive their total income from their agricultural activity remained around 2% of the total farms in the U.S. and this growing economy is having a positive effect upon even those farmers.

The U.S. harvest for corn and soybeans is nearing completion and that would normally mean a building of inventories across the country. The increased supply normally would depress commodity prices, but October prices have held up rather well for corn while soybeans have seen some recent declines in prices.

As we worked on our 2019 Tractor & Combine forecast, it has become evident to us that the growing general economy has provided additional buying power for farm equipment in the U.S. In recognition of that financial impact and the understanding that our historical models have not adequately reflected the changes taking place in the ag equipment markets, we have made some tweaks and some significant changes to those models in recent months.

2018 has been the year of not only a base-building, but has shown some real strength in the larger tractor categories and in combines. 2019 is not going to be a year of dynamic growth in the markets but it is going to be one that will have growth equal to 2018, or better.  Any positive movement in the negotiations between the U.S. and China will become evident by a positive increase in tractor and combine sales next year.