By Charlie Glass posted on December 13, 2022 | Posted in Analysis & Commentary

Under 40 Horsepower Tractors – While the retail sales number for these smaller tractors remains very good, November’s retail sales were 477 units below the 5 year average. 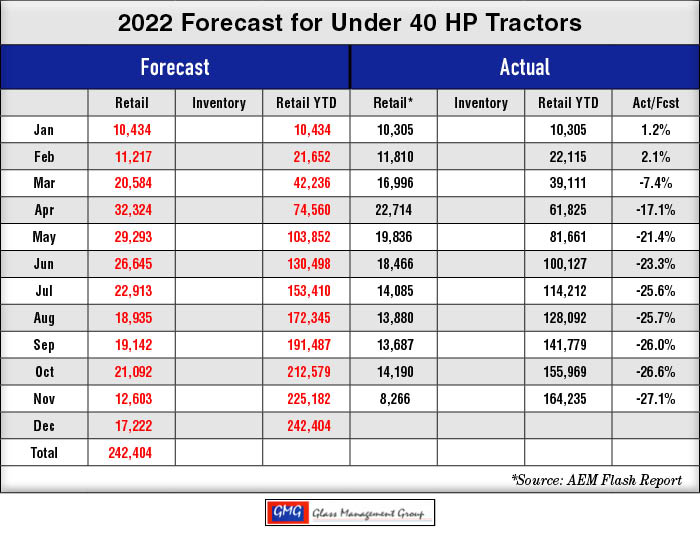 40-99 Horsepower Tractors – This category of tractors have maintained strong retail sales numbers in 2022 but are still -16.8% below our original forecast. 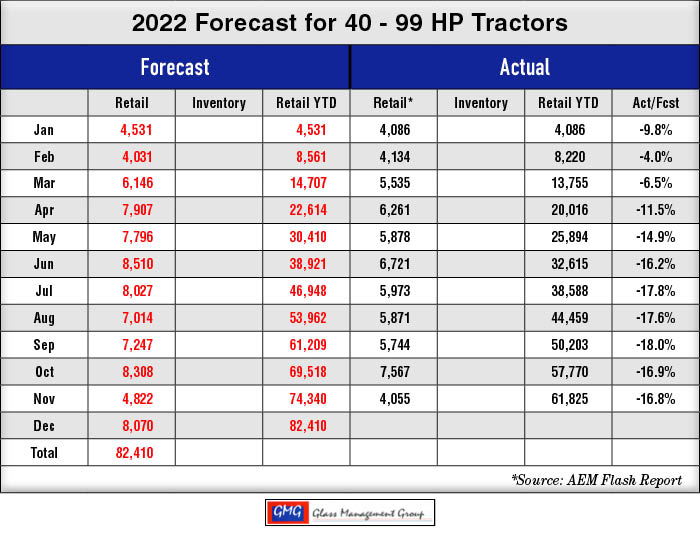 100+ Horsepower Tractors – These largest horsepower tractors have maintained retail sales volume in 2022 that has exceeded our original forecast by 4.3%. 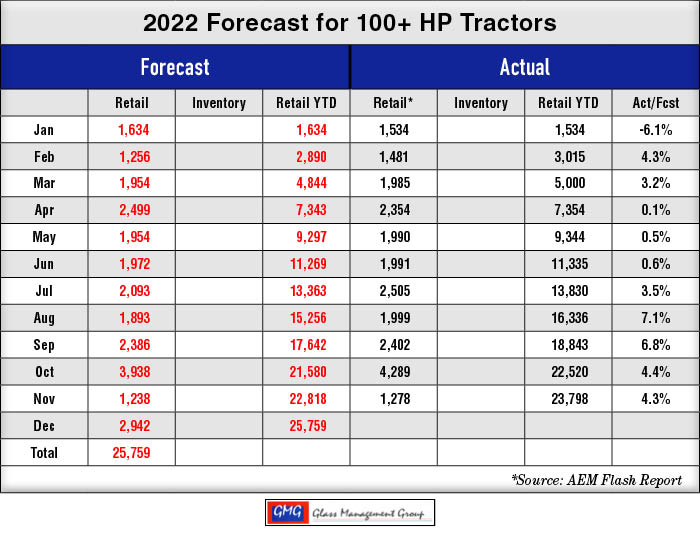 4WD Tractors – November is historically the lowest unit volume month of the year and this year is no exception and sales through November are the second highest in the past five year. 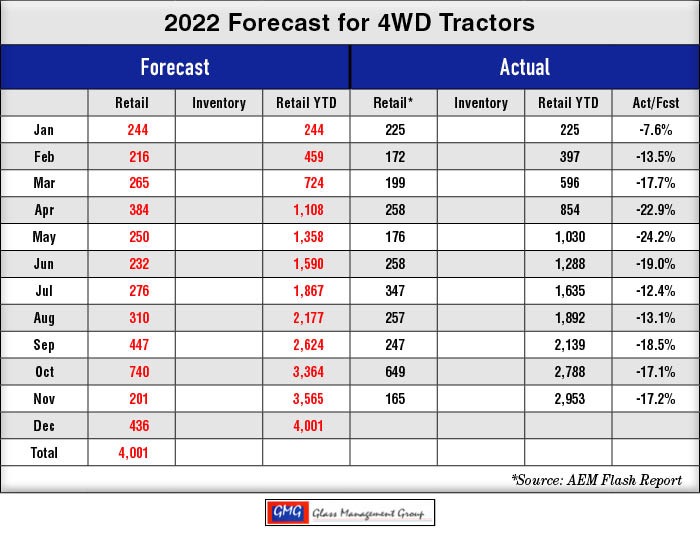 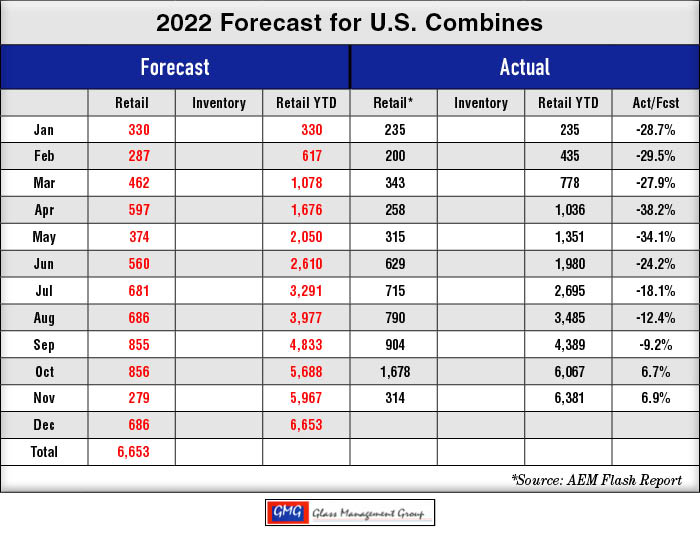 Déjà vu All Over Again!

Corn and soybean harvesting activity is nearing completion as dry weather conditions have pushed the harvest well ahead of the past five year average.  The current U.S. Department of Agriculture’s (USDA) forecast for U.S. corn yield is 177 bushels per acre and that is slightly below the five year average.  Soybean yield is anticipated to be slightly less than 52 bushels per acre but that represented a half bushel increase over 2021.

The prospects for 2023 crops are still muddied by the rising cost of seed, fertilizer and herbicides for next year.  There are some reports that fertilizer prices have risen by nearly 200% this year and that will directly reduce the net farm income for grain farmers, the main purchasers of higher horsepower tractors and combines, in the coming year.

Grain shipments are under increased pressure as the cost of moving corn and soybeans has risen significantly in the past few months.  Diesel fuel prices have moderated somewhat in the past month but are still at levels that will directly impact the profit on each bushel of grain transported.

The movement of grain down the Mississippi River has been reduced by the extremely low water levels all along this vitally important waterway.  Freight cost per bushel charged along the Mississippi has generally increased by 185% this year alone, according to the USDA.   The current costs are much higher than the five year average for barge shipment.

The impending railway strike has been averted by governmental actions but that is seen as a temporary solution and the prospect of a strike in the future still clouds the costs of shipping grains by rail.

The price for diesel fuel has moderated somewhat in the month of November but prices continue to remain above $5.00 per gallon. Not only does this impact the cost of delivery of the grain crops but it is casting a long shadow over the cost of producing the 2022/2023 grain crop.

Production farmers, those who produce at least a portion of their income from their farming operations, continue to look warily into 2023 and those prospects have not increased their intentions to purchase new tractors and combines next year.   Many of the larger horsepower tractors and combines have been purchased by a lease agreement and those agreements have a finite ending date that will require some action from those farmers involved.  There will continue to be some replacement purchases made next year but our models are indicating that those purchases will produce a very small increase over the number of units sold in 2022.

The U.S. general economy continued to feel the impact of inflationary pressure and has seen some large increases in the price of products across the board.   These increased prices have drained discretionary spending by many U.S. consumers, including lifestyle farmers.

Our models are suggesting that the smaller horsepower tractors will continue to grow in number but at a much slower pace than in 2022.

The 400 farmers that are surveyed each month for the Purdue/CME Group Ag Economy Barometer demonstrated a slightly brighter view of the future of their farms but the near term costs were expected to continue to increase.  These farmers also indicated a reluctance to purchase new equipment at this time and the primary reason given was the currently increasing cost of tractors and combines.

The increasing cost of shipment for U.S. produced grains has slowed export sales in the month of November.  Lower sales volumes have resulted in lower prices for U.S. produced corn but soybeans have shown a slight improvement over the closing prices in October.

The midterm elections are now history and the results was somewhat disappointing to the agricultural markets but the reality has become focused and the nation is moving on.

Commodity prices continue to remain in the profitable range for grain producers during 2022 and there is some confidence that farmers will be in a very liquid financial condition coming into 2023.  This could indicate that many farmers will be in a position to replace aging tractors and equipment on their farms and some could be adding to their on-farm inventory in 2023.

Lifestyle farmers, the principle purchasers of tractors under 60 horsepower, have witnessed a slowdown in their available cash and many have elected to spend those funds on items other than farm equipment.  Small horsepower tractors will continue to an increase in unit numbers in 2023 but at a much slower pace than in 2022.