On the heels of a sharp two-month decline, the Agricultural Economy Barometer stabilized at a reading of 134 in July, just 3 points below a month earlier. This month’s sentiment index was the weakest barometer reading since July of 2020 and marked a return to sentiment readings observed from 2017 through 2019 when annual average barometer readings ranged from 131 to 133. Ag producers’ sentiment regarding current conditions weakened in July. The Index of Current Conditions, at 143, fell 6 points below June’s value as principal crop prices weakened. The Index of Future Expectations also softened, but at 130 was just 2 points below a month earlier. The Purdue University-CME Group Ag Economy Barometer sentiment index is calculated each month from 400 U.S. agricultural producers’ responses to a telephone survey. This month’s survey was conducted from July 19-23, 2021. 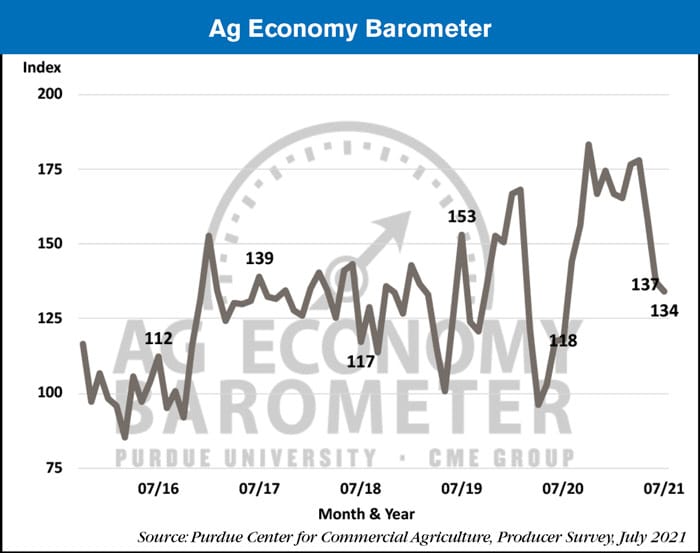 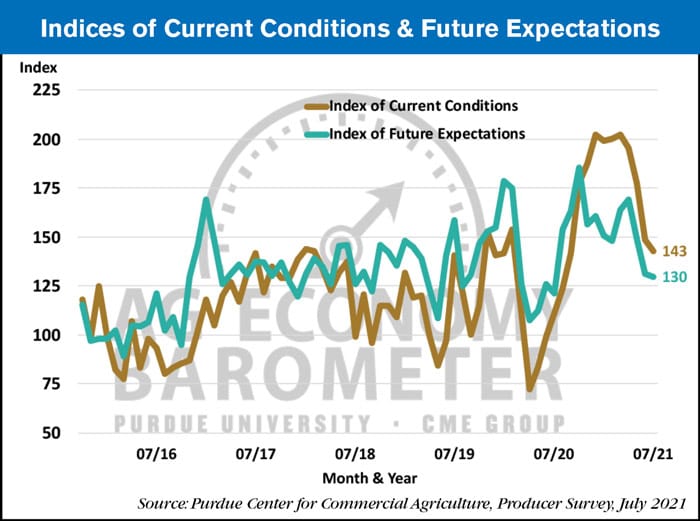 The Farm Financial Performance Index improved modestly during July to a reading of 99, 3 points higher than in June. Although this month’s index reading was 28% below its April peak, it remains well above readings from a year earlier. For example, this month’s Farm Financial Performance Index reading was up 43% compared to July 2020 when the index stood at 69. Ag producers’ sentiment regarding their farms’ financial condition was more optimistic when prices for corn, soybeans, and wheat were surging last fall, winter, and early spring but viewed in a longer-run context, recent sentiment readings suggest farmers remain cautiously optimistic about financial conditions on their farms.

The Farm Capital Investment Index moved lower in July to a reading of 50, down 4 points compared to June. Weakness in the investment index was primarily attributable to the ongoing decline in plans for farm building and grain bin purchases in the upcoming year. Two-thirds of July’s respondents said their construction plans were lower than a year earlier, compared to 61% who said that in June. The shift in construction plans was attributable to a drop-off in the percentage of farmers who planned to keep their purchases about the same as last year. Plans for farm machinery purchases were somewhat weaker in July than in June as producers were a bit more inclined to say they would reduce their machinery purchases instead of holding them constant with a year earlier. Meanwhile, the percentage of producers planning to increase purchases was unchanged.

Some of the concerns picked up about future financial performance and the advisability of making large investments on the survey could be attributable to producers’ concerns about rising costs. For the second month in a row, the barometer survey asked producers about their expectations for farm input prices. Responses on the July survey mirrored those on the June survey. Just over half (51%) of the producers in this month’s survey expect input prices to rise 4% or more over the next year, three out of ten expect costs to rise 8% or more and nearly one out of five (18%) expect input prices to rise by 12% or more. These expectations are markedly higher than the rate of 1.8% per year that input prices rose over the last decade. 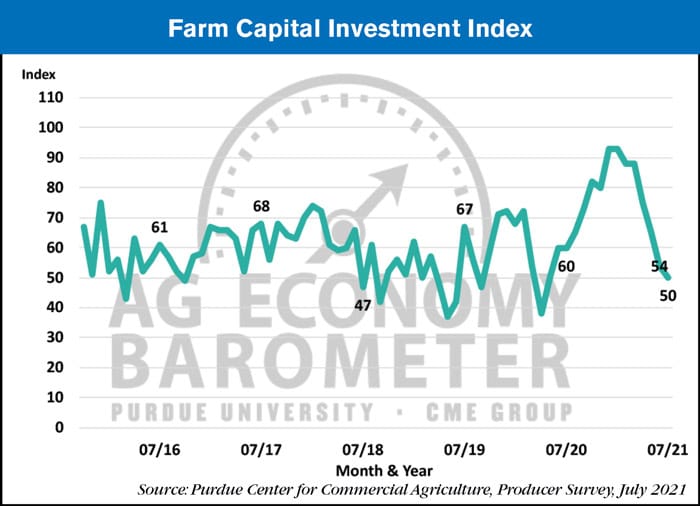 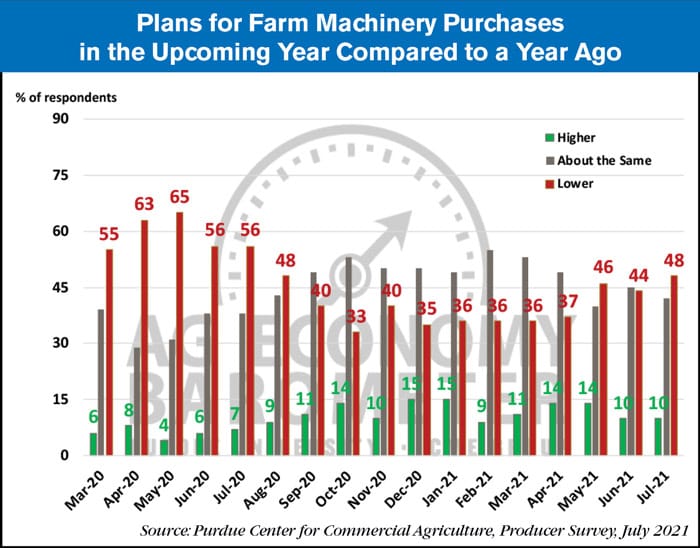