The latest episode of On the Record is now available! In this week's program we take a look at the New York State Senate's Digital First repair act, which was recently passed — marking the first chamber in the U.S. to pass a right to repair bill. In the Technology Corner, Ben Thorpe shares dealers' outlook for growing revenue from precision farming. Also in this episode, dealers report new price realization reached a 9-year high in the latest Dealer Sentiments and Business Conditions Update and the Equipment Dealers Assn. announces Claas and Branson Tractors earned top honors in the annual Dealer-Manufacturer Relations survey.

S4104, which advances the Digital Fair Repair act, was passed with bipartisan support with 51 senators approving the motion and just 12 voting against. The New York Senate voted on the bill without hosting a signal hearing that would have allowed all opinions to be heard and considered.

Josh Evans, vice president of government relations and general counsel for the Equipment Dealers Association, says no other chamber has passed right to repair legislation to date. However, he notes that a lot of similar legislations is cropping up specifically in the Northeast but across the U.S. as well.

While the Assembly did not take up similar legislation this session, it is likely to come up in the next session in January. And, Evans says there is a possibility that a special session could be called this fall.

Evans says that when the association and dealers are able to meet with legislators and can share their viewpoint, it is often well received.

“Once they hear the concerns, it's been my experience that it allows them to ponder the implications. And one of the things that we try to stress is let's not think about where we are right now. Let's think about where we're going. And in 5 years, it’s very likely we’re going to have autonomous vehicles operating in the construction field or semi-autonomous operating in the construction field, the agricultural field. We need to be thinking about where we're going and do we want to open up the source code that would allow an operator who is inputting GPS data are actually manipulating the machine to manipulate that source code, such that someone who wants to turn right then turns around and turns left. Do we want to create those dangers either in the medical field or OEMs off-road equipment? That's kind of the discussion we've been having with legislators and frankly, the ones that take the time to hear us out I think they appreciate the message.”

Evans encourages dealers to reach out to their elected officials to discuss the legislation and the impact it would have on their business.

This week’s Dealers on the Move include Florida Coast Equipment and H&R Agri-Power.

Kentucky based Case IH dealer H&R Agri-Power has acquired FB McAfoos in Benton, Ill. This is H&R’s 18th location and third in Illinois. The dealership will continue to operate as FB McAFoos.

The results of the ninth annual Precision Farming Dealer benchmark study — with contributions from dozens of farm equipment dealers, input retailers and independent precision companies — show that nearly three-fourths of dealers are forecasting revenue growth from precision to be up at least 2% in 2021, despite inventory challenges. 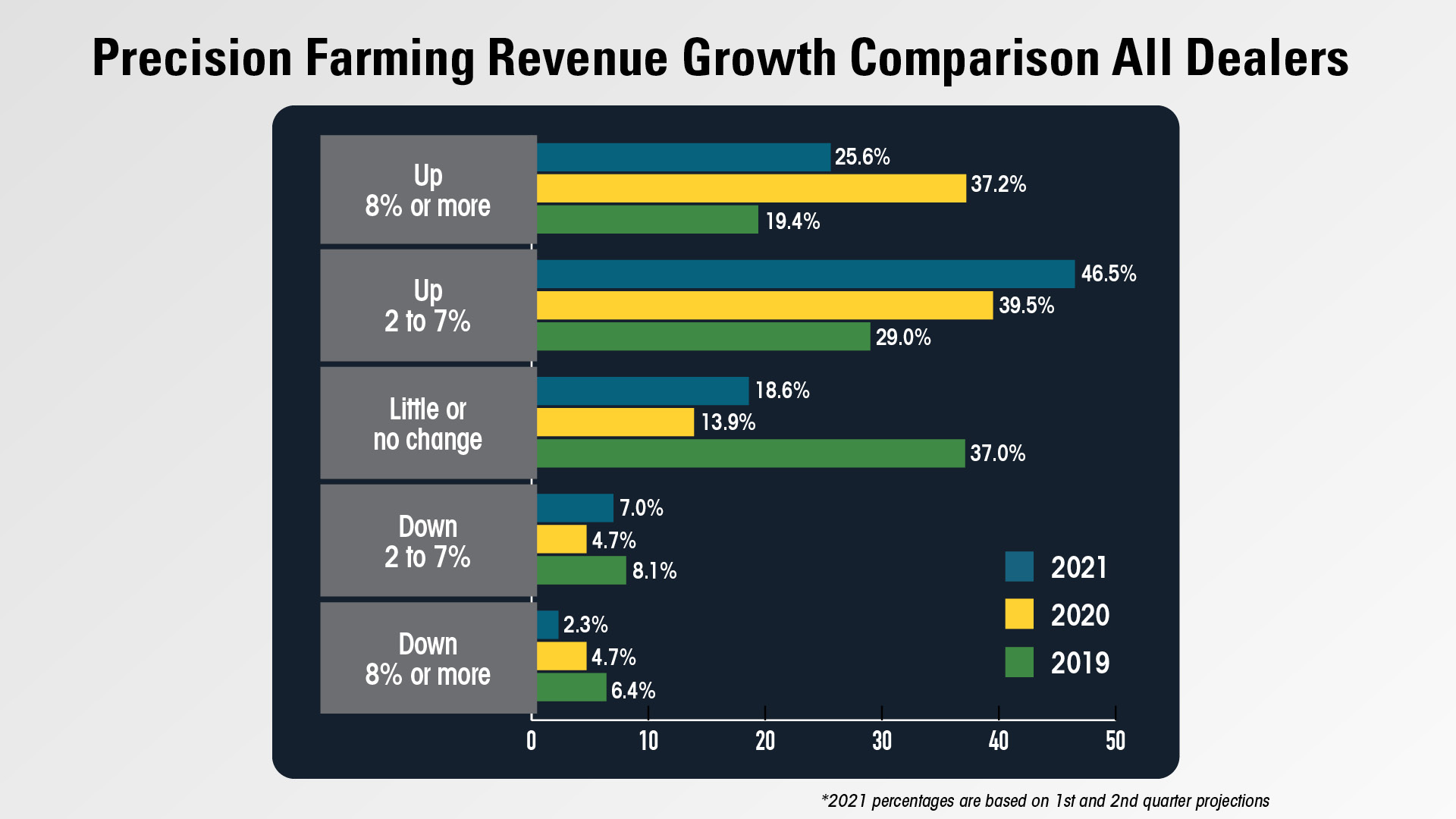 Comparing the responses gathered from 25 different states, provinces and overseas, 37.2% of dealers reported revenue growth of 8% or more in 2020, up from just over 19% who reported the same level of growth in 2019.

This reverses an increasingly conservative revenue outlook going back the last 3 years. About 19% of dealers expect little or no change in 2021 revenue, while just 9.3% forecast revenue declines of at least 2% — down from 16% last year, which marked the highest total forecasting a decline in the history of the survey. 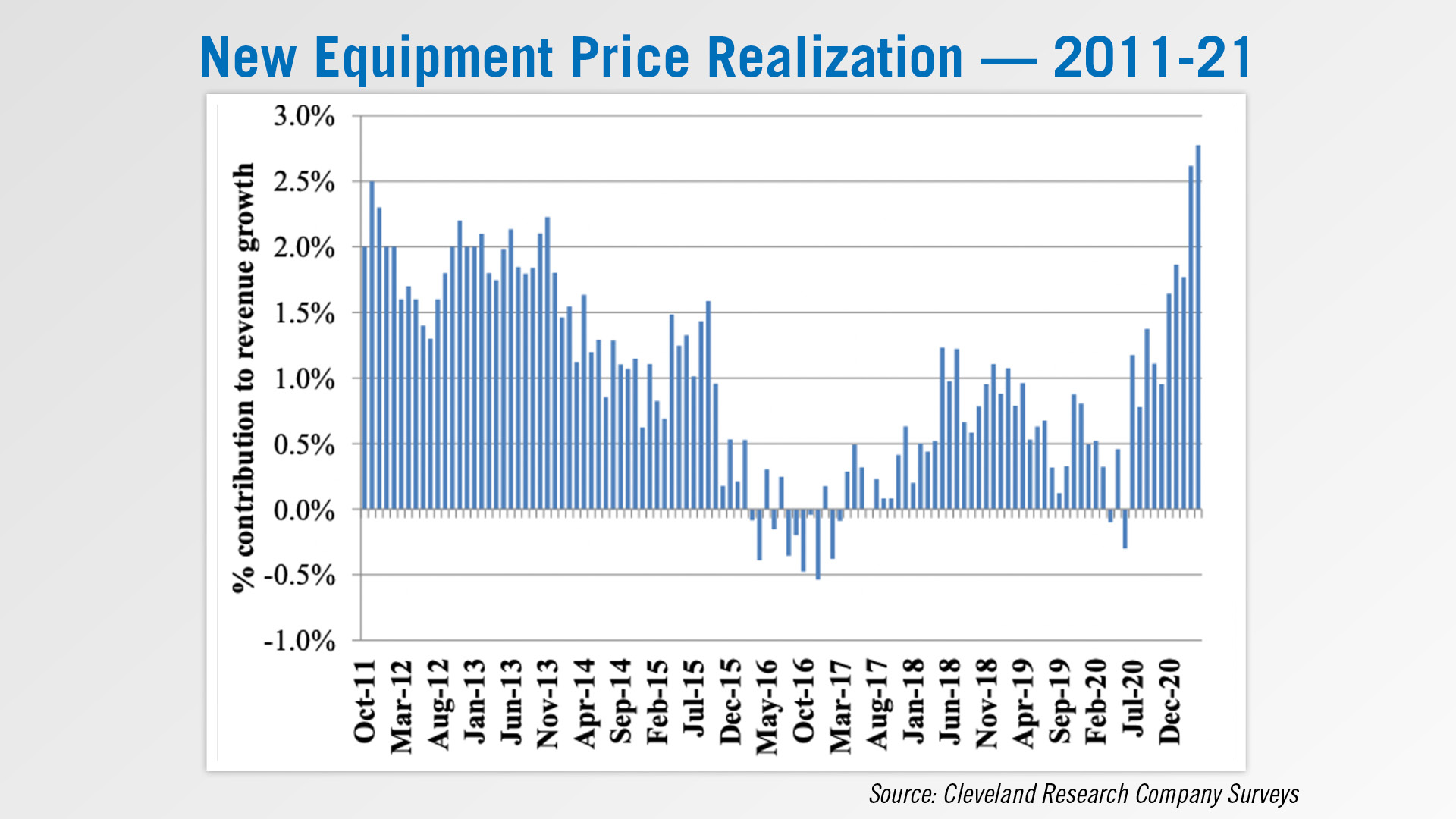 Commentary from dealers suggests the increase in prices is the result of freight and material surcharges.

One dealer from the Corn Belt stated that, “All of the OEMs are increasing prices. A few are even requiring us to call in before we price to customers based on units of the order.” Another dealer from Canada said ,“2022 products have a 5% price increase and manufacturers have pulled all incentive programs. We are also being hit with 8-10% steel surcharges.” A third dealer from the Corn Belt summed up the situation by saying, “It is the perfect storm and unlike anything I have seen in 20+ years in the industry.”

According to the Equipment Dealers Assn.’s 2021 Dealer-Manufacturer Relations Report, Claas and Branson topped this year’s lists for full-line and tractor manufacturers, respectively. 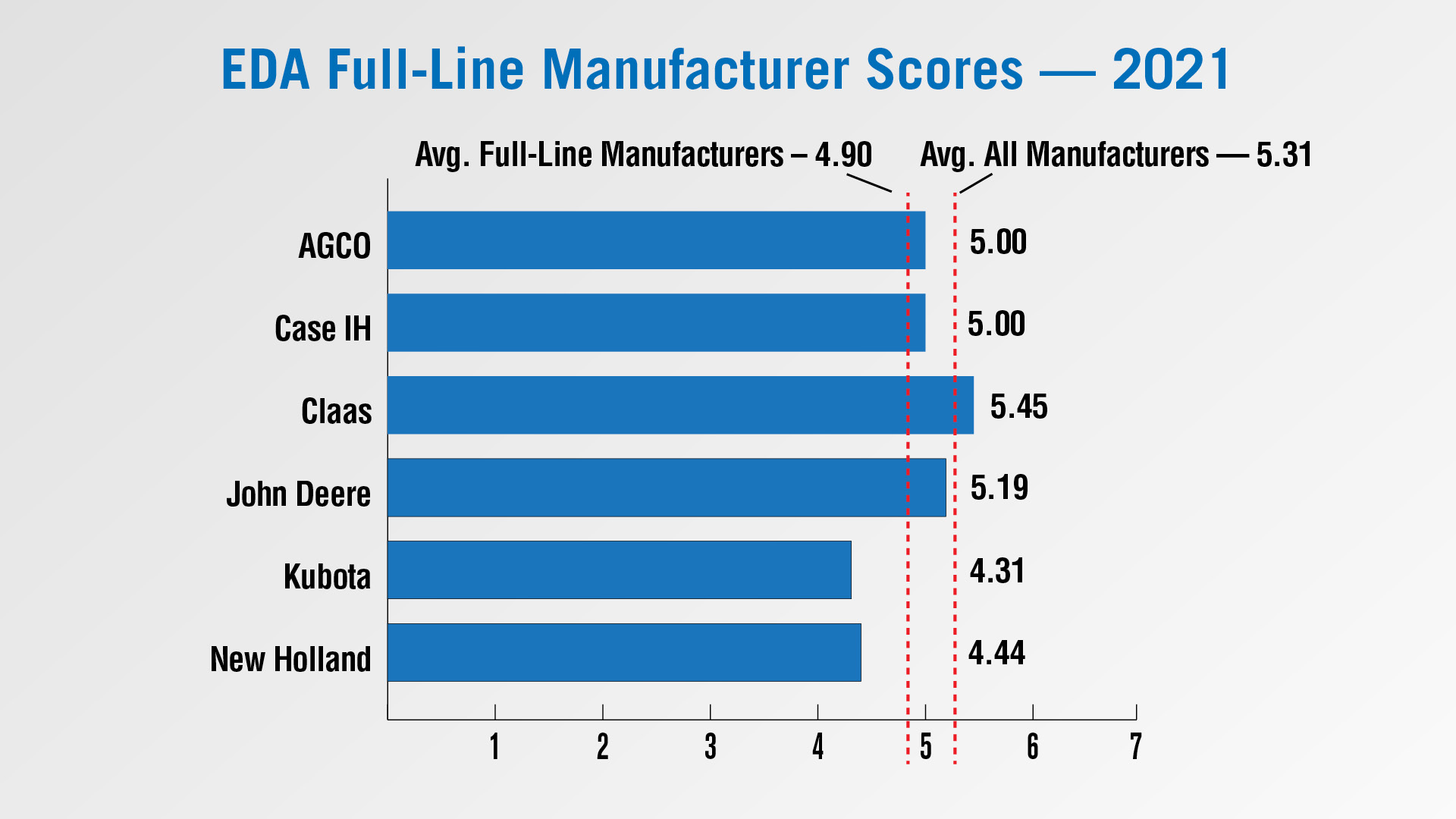 On a scale of 1 to 7, Claas took the lead in the full-line category with a total score of 5.45, above both the average full-line manufacturer score of 4.90 and the total manufacturer average of 5.31. Claas ranked the highest in 6 of the 12 categories dealers were asked about, including product availability, product quality and overall satisfaction. Among the remaining 6 categories, Case IH lead in “manufacturer response to dealers concerns” at 4.96, while Deere took the lead in warranty procedures, warranty payments and marketing & advertising support.

John Deere took second in the full-line manufacturer category with a total score of 5.19, while AGCO and Case IH tied for third at 5.00 each. Kubota and New Holland brought up the rear at 4.31 and 4.44, respectively. 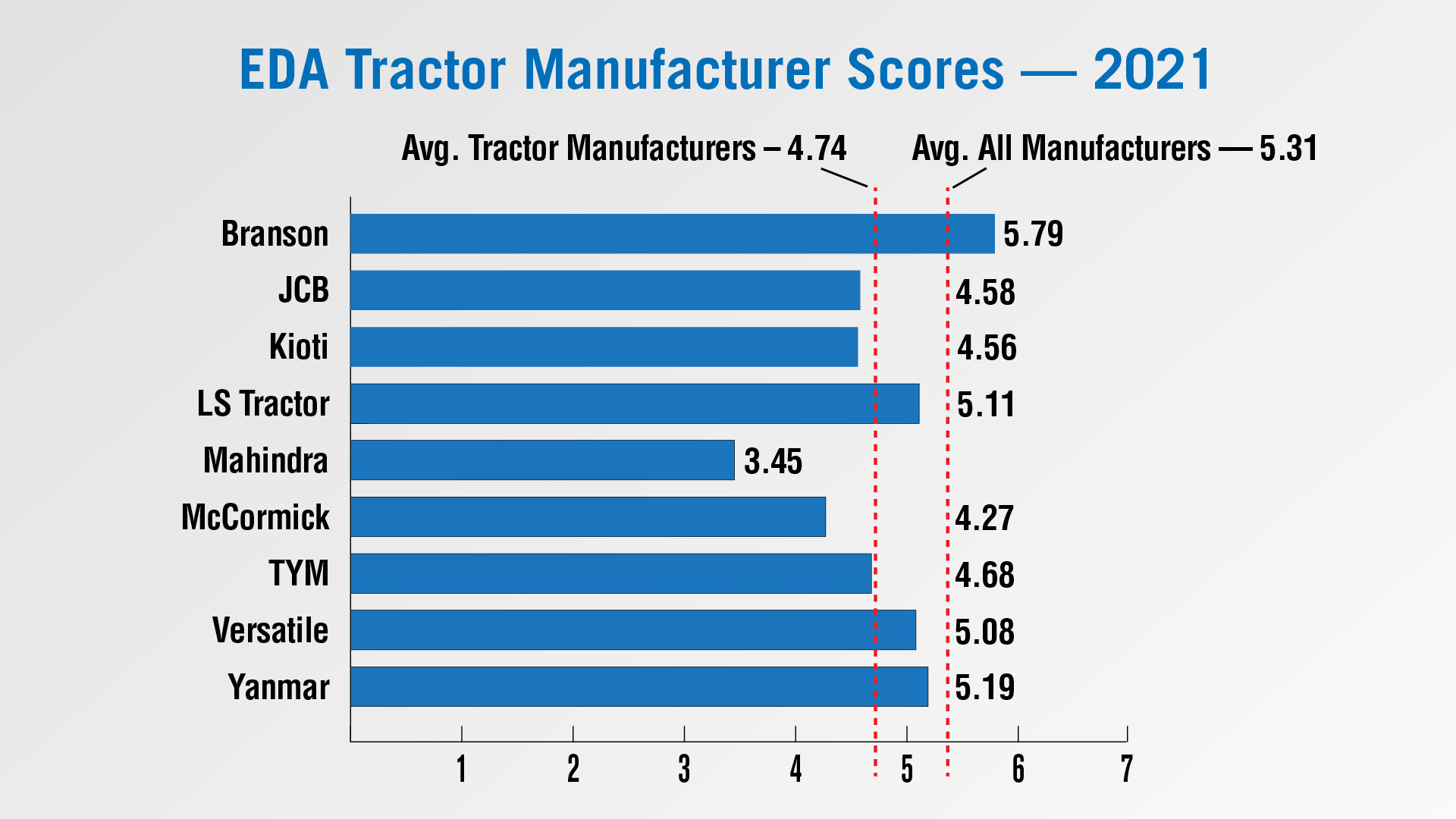 For the tractor manufacturer category, Branson took the lead with an overall score of 5.79 vs. the average tractor manufacturer score of 4.74. Branson had the highest score in 10 of the 12 categories dealers were asked about. This excludes Yanmar scoring 6.40 in product quality, and Versatile scoring 5.40 in communications with management.

Look for full coverage of the EDA 2021 Dealer-Manufacturer report in the upcoming July/August issue of Farm Equipment.

[Podcast] New York One Step Closer to Right to Repair