For the quarter ended April 30, net sales were down 4%, at about $7.9 billion, compared to the same period last year. Sales for the Agriculture and & Turf division were nearly flat for the quarter, but were down 5% for the first half. 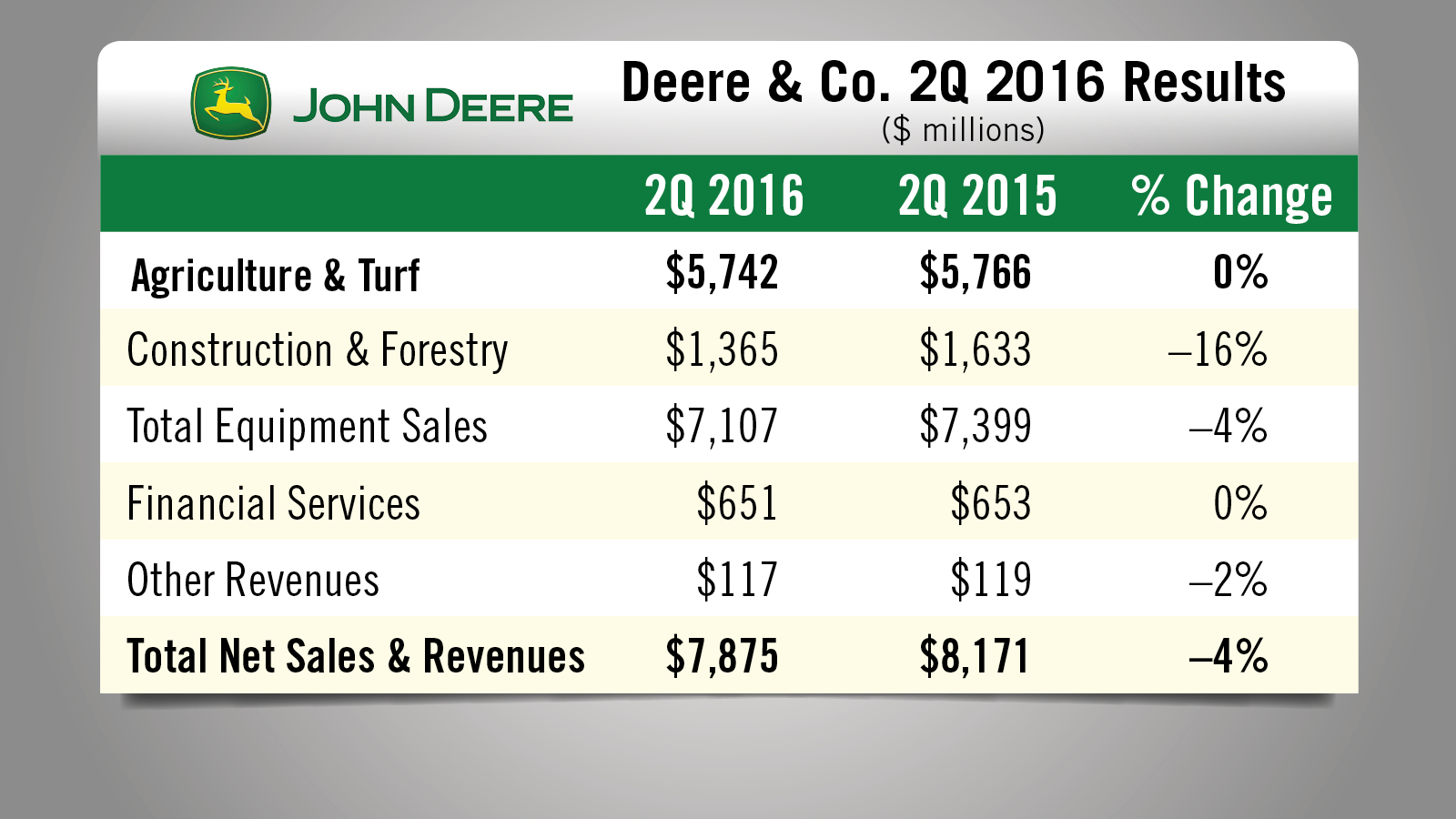 Deere is forecasting its Ag & Turf sales worldwide to be down 8% for fiscal 2016. This includes a negative currency-translation effect of about 2%. North American Ag & Turf sales are forecast to be down 15-20% for the year. However, sales of turf and utility equipment in the U.S. and Canada are expected to be flat to up 5% for 2016. 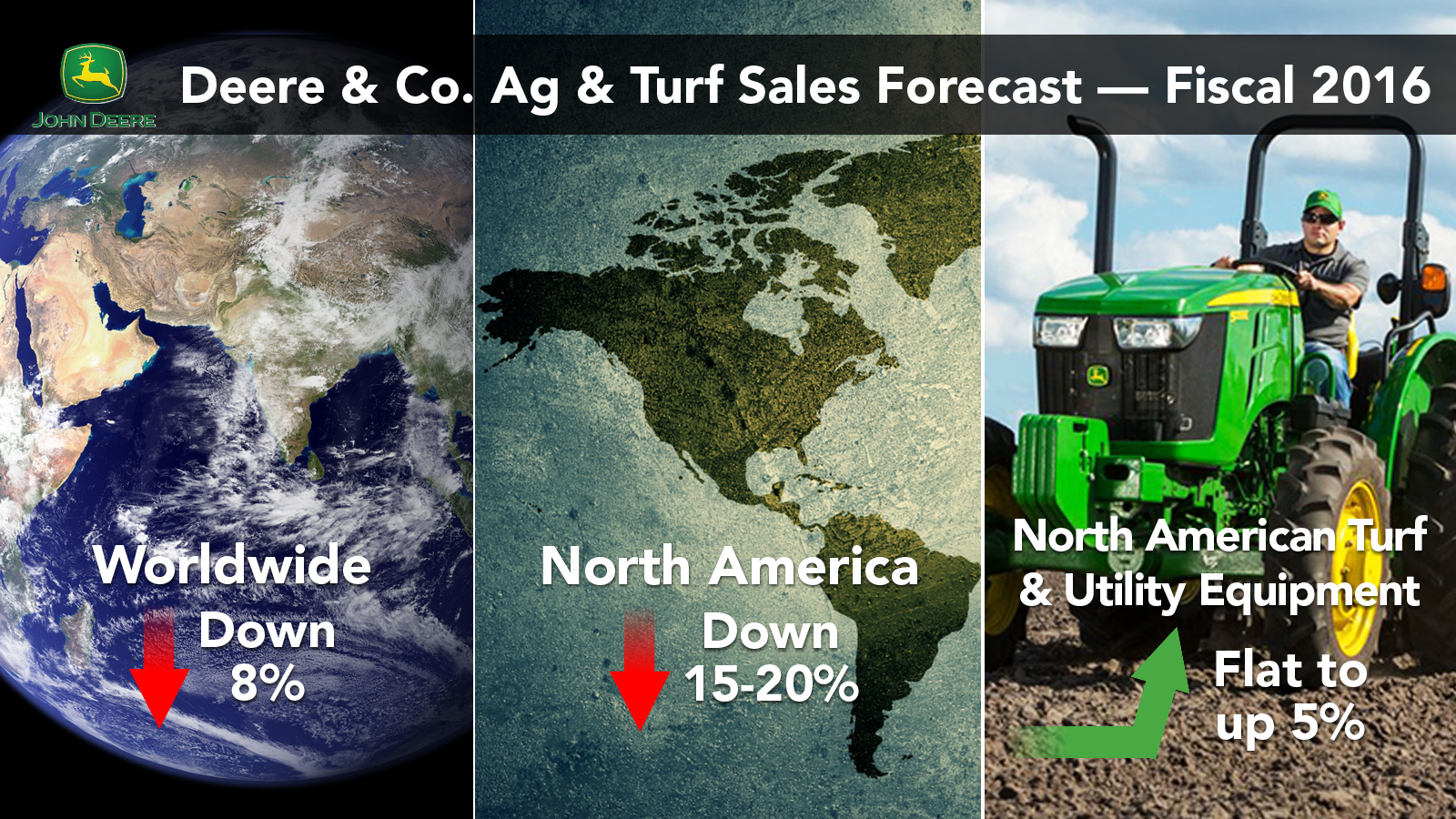 On May 13, Kubota announced it was acquiring Kansas-based Great Plains for $430 million.

The deal, which takes Kubota closer to being a full-line ag company, is expected to be completed in July. 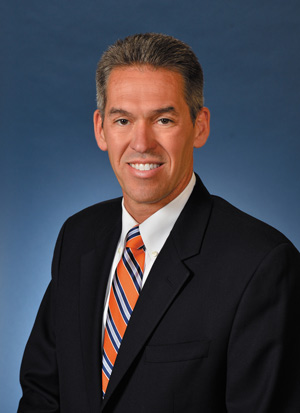 We spoke with Todd Stucke, Senior Vice President, Sales, Marketing & Product Support for Kubota, who says the Great Plains deal will be similar to Kubota’s Kverneland operation in Europe.

"Kubota’s view is to be a major player in the implement business worldwide. We have our Kverneland company over in Europe and now to expand that strategic direction and combining that with Great Plains, it allows us to achieve that overall goal." — Todd Stucke

Great Plains founder and chairman Roy Applequist plans to remain on the leadership team to help guide the operations and facilitate a seamless transition.

Kubota also has plans to double its current tractor production capacity in China to 10,000 units annually. The Japanese manufacturer is building a new 330,000 square foot facility in Suzhou, China that will cost an estimated $56 million.

Production is anticipated to begin in fall 2017 at the new facility. Kubota also plans to increase production of combines for wheat and corn by 20% to 45,000 units annually. Its Chinese dealer network is expected to increase to 1,200 locations by 2018. Currently Kubota has 900 stores in China.

This week’s Dealer on the Move is Mazergroup JCB of Steinbach, Man.

Compatibility between farm equipment components continues to be the primary source of frustration for many precision farming dealers. The tedious task of troubleshooting functionality problems can sometimes strain dealer relationships with customers and in some cases, suppliers.

Progress on developing true plug-and-play compatibility through ISOBUS connections has been ongoing, although at times, it’s an arduous process, especially in North America.

But the collaboration of two independent organizations aiming to streamline equipment functionality could help accelerate the rate of progress. The partnership between the Agricultural Electronics Foundation, or AEF, and AgGateway’s Precision Ag Council is streamlining overall objectives of the two organizations and broadening the network of compatibility stakeholders. 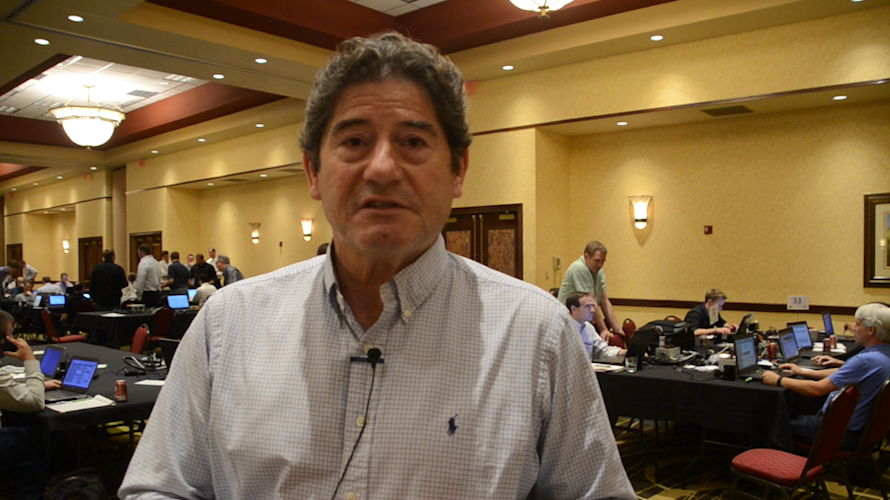 Talking with Joe Tevis, senior advisor to Topcon Positioning Systems at the AEF Plugfest event earlier this month in Lincoln, Neb., he says that the 3-year partnership is an inclusive opportunity to make sure companies and retailers are working toward a common goal.

"It’s a natural outgrowth of that cooperation in that the AgGateway group has really a different set of members than does AEF. There are overlaps. Most of the large machinery OEMs are part of both. But for example, cooperatives, seed retailers, grain marketers may be part of AgGateway, but they typically aren’t part of AEF. But the cooperative efforts and reporting then, kind of exposes a lot of the AEF work to a new group that’s now part of AgGateway and vice versa. So as we combine our efforts and also report to different groups, that expands the tent really of precision ag if you will and the influence. ”

The AEF currently has more than 190 member companies, primarily equipment suppliers, while AgGateway has more than 200 members including ag retailers, ag input suppliers and software and data service providers.

While there have been plenty of comparisons drawn between the current downturn in the ag economy and that of the 1980s, a recent report from Baird Equity Research shows that farm balance sheets are in better shape than they were during the commodity downturn of the ‘80s.

However, Baird analyst Mig Dobre notes that leverage is rising while balance sheets begin to feel the pressure of lower farmland values. He says there’s an elevated risk that weak farm equipment demand will remain through 2017.

Dobre says farm balance sheet progression is key to future ag equipment demand. He notes that farm debt has increased more slowly than  farm receipts, and growth in excess of overall receipts was a precursor to and during the 1980s farm crisis. Currently, he says, the U.S. farm sector is reaching a point where debt growth is outpacing receipts, making balance sheets reliant on stable to rising farmland values.

According to Dobre, real estate is a farmer’s largest asset, accounting for 81% of overall assets. He says what they find striking is “the massive contribution land appreciation has had …  over the past 50 years rising farmland values have contributed 96% of equity expansion.” 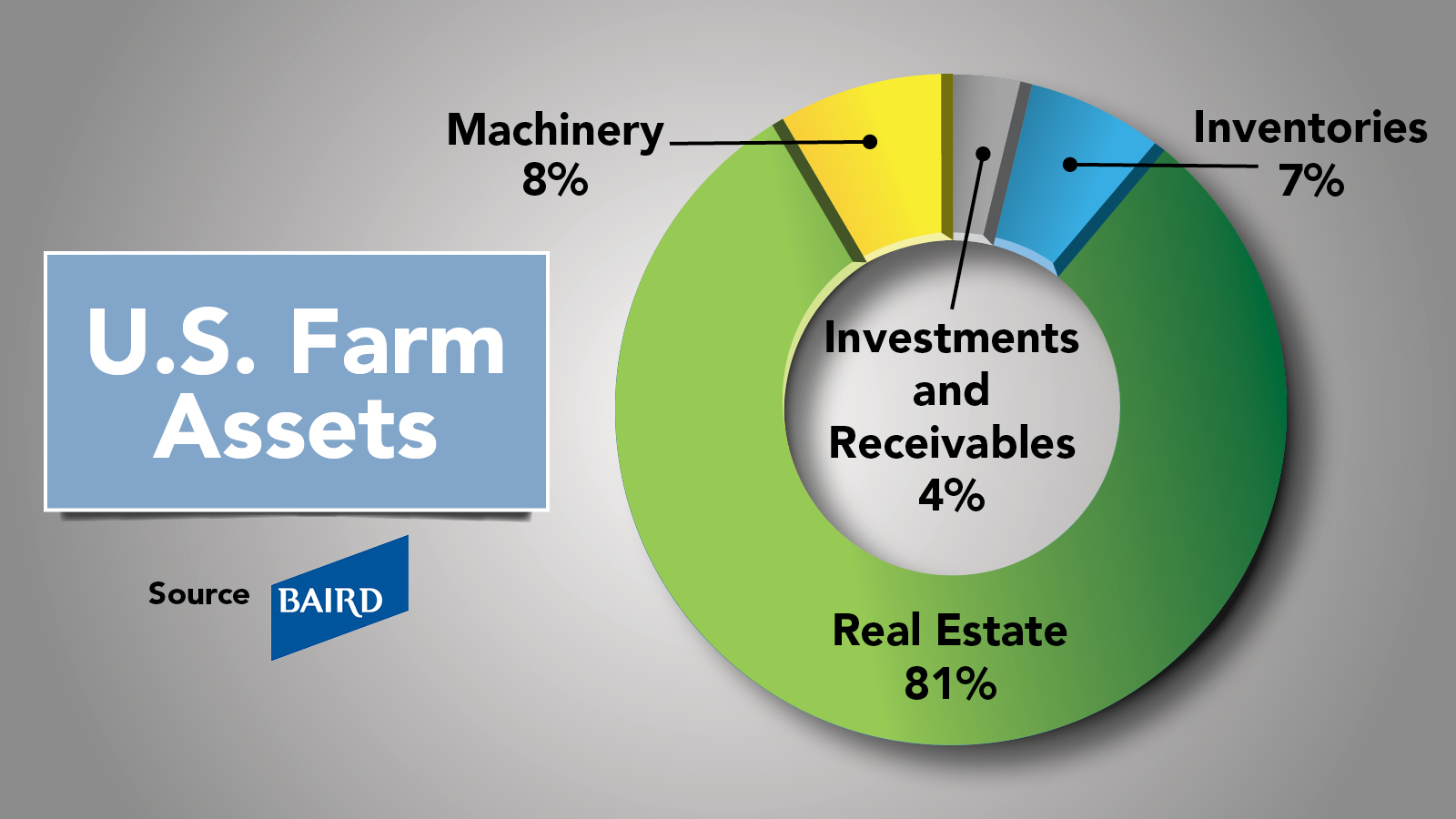 Currently, rising leverage isn’t a problem, but the Federal Reserve warns that it could become one. According to the Kansas City Federal Reserve Bank, “This most recent uptick in loan demand may be more concerning because it has coincided with a period of falling repayment rates, softening farmland values and increasing collateral requirements.” 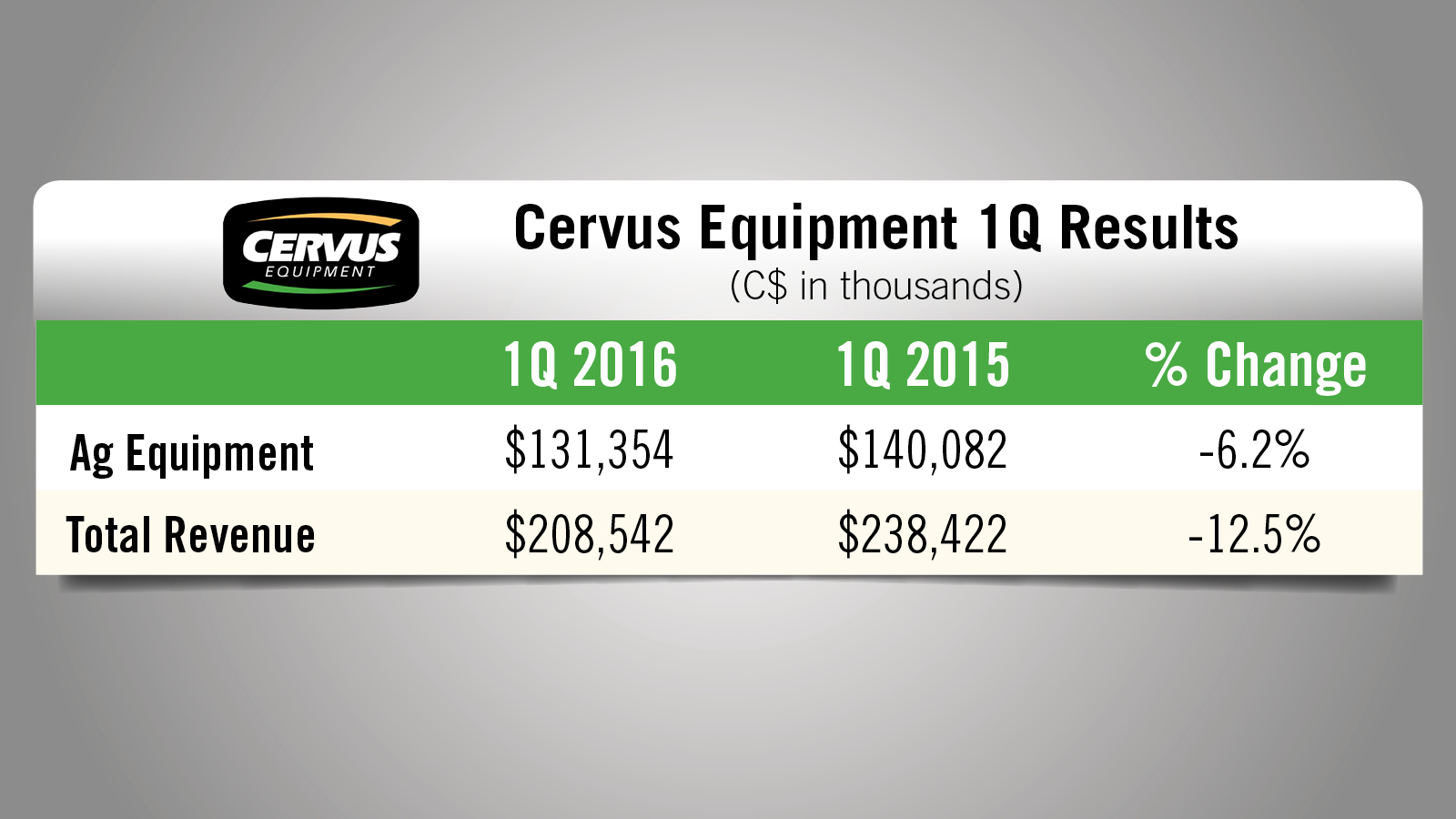 The dealership reports that farm machinery sales for the quarter came in at C$131.4 million, compared to C$140.1 million a year earlier.

Graham Drake, president and CEO of Cervus, says first quarter profitability in their ag dealerships indicates a good start to the year. He adds that net Canadian farm income leading into 2016 was among the highest on record for producers.

Allis Chalmers purchased the Hahn Inc. line of sprayers in 1966 and began production of the 2300 self-propelled high-clearance sprayer. It had 72 inches of crop clearance and an adjustable rear tread from 76-120 inches. The engine was a 30-horsepower Wisconsin V4 with a four-speed transmission with speeds of 2.5, 5, 10 and 20 mph. 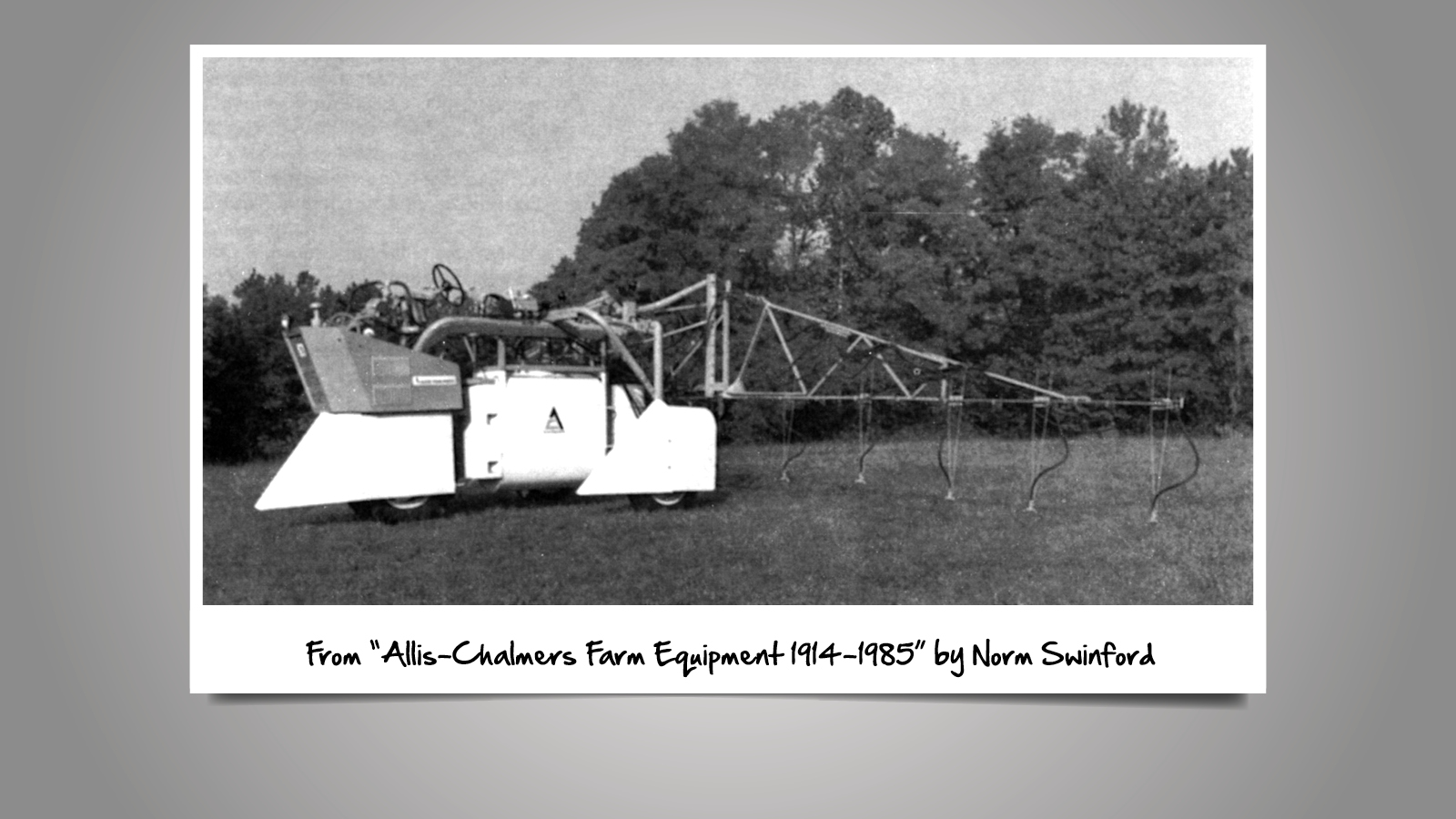