In the latest episode we look at the two sides of the debate over Nebraska's "Right to Repair" bill, the latest dealers on the move, an announcement from Precision Farming Dealer, and the latest earnings reports from Titan International, AGCO, Trimble and Alamo.

The Argument for the Right to Repair

Nebraska’s “Right to Repair” bill is garnering a lot of attention. On one side of the debate are dealers and OEMs who argue only certified and trained technicians should be allowed to service today’s highly sophisticated and technical equipment.

The Government Relations Committee of the Equipment Dealers Association is in the process of developing a policy statement on the issue, but believes the dealer segment must take a stand. According to EDA, at some point over the past 10 years, the issue of right to repair has been debated in at least 10 state legislatures.

Natalie Higgins, vice president of government affairs and general counsel for EDA, told Ag Equipment Intelligence, “Dealers work hard to keep their customers safe; we think that everyone who services equipment should be required to have the training and expertise to do so safely.

She adds that improper repairs or modifications can void equipment warranties and/or violate applicable safety or environmental laws. These are serious concerns for our industry, Higgins says.

But there are two sides to every story. Kenny Roelofsen of Abilene Machine, a replacement parts distributor, contacted us with an opposing view. He argues that if the bill doesn’t go through it will hurt independent repair shops’ ability to move forward into the future as businesses.

“My main case would be the auto industry and the truck industry has been doing this for quite some time. I don’t see why there is an exclusion when it comes to ag equipment. For example, AutoZone or Napa or places like this, they have access to their diagnostic tooling. We’re talking about cars and trucks where the risk is so much higher, especially if they want to modify it. My second argument would be they feel, I feel as if some of the OEMs are hesitant because they would feel liable if some modification had caused an injury, for example, but just like in the auto and truck industry that doesn’t make them liable for it. A modification to the pre-existing standard is obviously is not recommended and it is not insurable.”

Dealers on the Move this week include, Birkey’s Farm Store, Western Equipment and Atlanta JCB.

Birkey’s, a full-line Case IH dealer based in Champaign, Ill., reached an agreement to acquire Farm Pride, a group with 5 locations across Illinois. The acquisition is expected to close by mid-August.

Western Equipment in Clinton, Okla., has acquired Ray Lee Equipment, a John Deere dealership with 6 locations in Texas and New Mexico. The ownership change will be effective Nov. 1.

When visiting and talking with precision farming dealers, one of the questions I like to ask is “What keeps you up at night?”

The answers tend to be as diverse as the size and location of the dealerships themselves, emphasizing the constantly evolving nature of the business. While losing a little sleep can be part of building a profitable precision department, it’s how dealerships overcome challenges and learn from their mistakes that define long-term success.

Earlier this year, more than 100 different dealerships and companies gathered to share, learn and network at the first ever Precision Farming Dealer Summit. The sold out, 2-day event put dealers in a learning-intense environment to discuss actionable, revenue-generating precision farming strategies.

“It certainly opened our eyes to the incredible opportunity for our dealers in addition to selling and servicing equipment, precision ag gives our dealers a new opportunity for revenues to help build their business and have sustainable growth over the future.”

This January 9-10 in St. Louis, will present another opportunity for precision farming retailers to gather at the 2nd Precision Farming Dealer Summit. The intimate event will feature networking and idea sharing through general sessions, panel presentations and dealer-moderated roundtable discussions.

Summit topics are scheduled to include, innovative solutions to conquering equipment compatibility, effective methods for branding your precision farming business and maximizing productivity and accountability of precision specialists.

“I also like to hear all the challenges that dealers have, whether it be billing out time or just giving good customer support in this new age of technology and the demands it’s put on us. So I feel real good about coming to conferences like this and being able to meet other people that are in the same world as I am.”

Co-located with the 25th Annual National No-Tillage Conference, the 2017 Precision Farming Summit will be held Jan. 9-10 at the Hilton St. Louis at the Ballpark. Stay tuned for conference updates in upcoming issues of Farm Equipment magazine and Precision Farming Dealer and visit www.recisionFarmingDealer.com/pfd-summit-registration for the pre-program discount!

Tire manufacturer Titan International announced its second quarter 2016 results on Aug. 4. According to the report, net sales for the second quarter, which ended on June 30, 2016, were down 12% to about $330.2 million dollars, compared to the same period last year. Gross profit for the first 6 months of 2016 totaled $77 million, which was 11.8% of net sales, a decrease from 2015’s 12.1% of net sales. Titan also saw a decrease across all ag equipment segments. 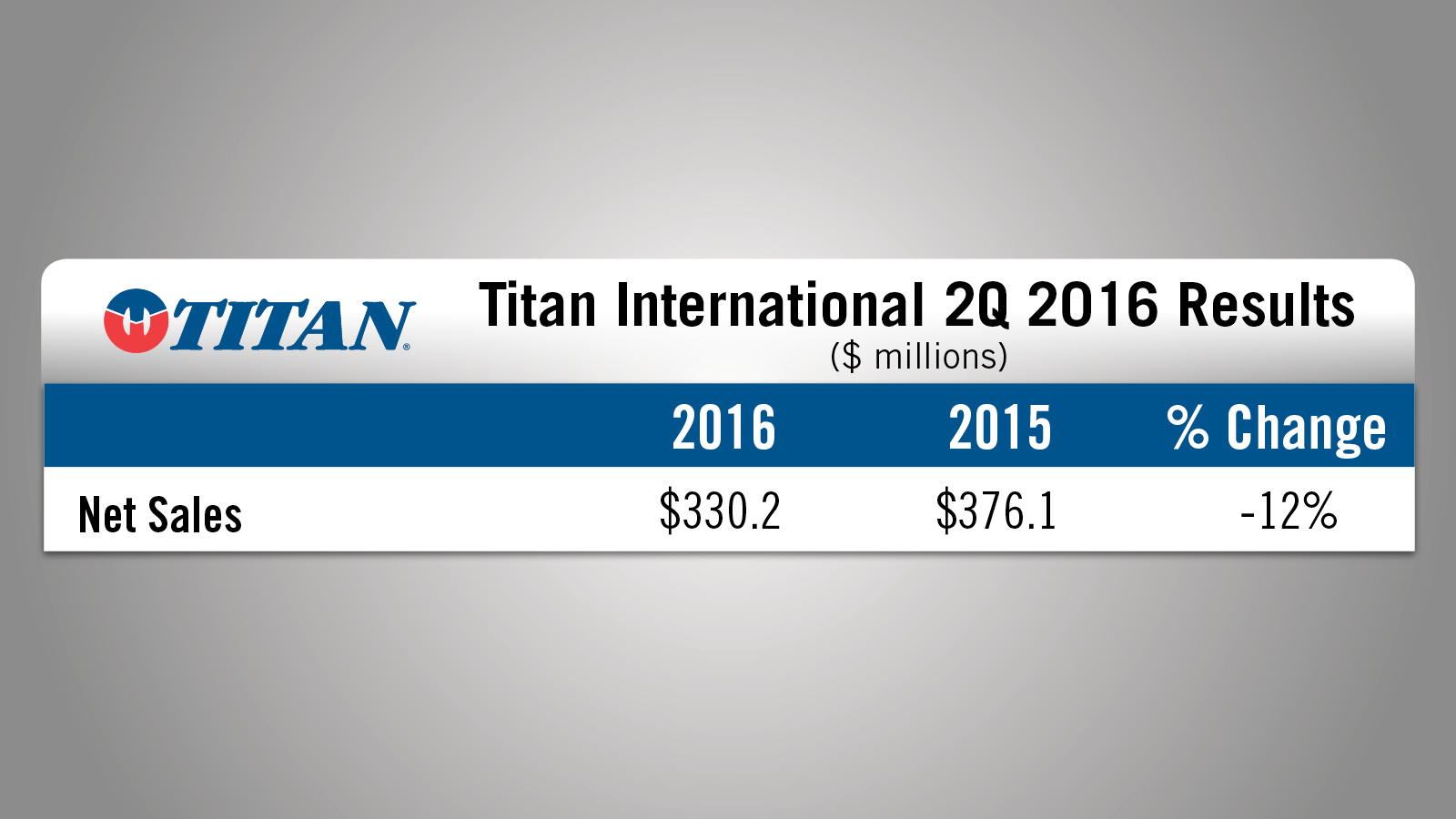 Titan Chairman and CEO Maurice Taylor said, “Second quarter has some good news, some not so good news and some great reasons to be optimistic.”

Taylor went on to say, “I believe the agriculture market is at or near the bottom and we expect to gain business from our competitors. We also must keep showing farmers the benefits of Titan’s LSW tires/wheels.”

North American net sales for the quarter were down 10% and down 11% year-to-date.

AGCO forecasts that net sales for full-year 2016 will reach $7.2 billion, with North American sales expected to be down 10-15%. 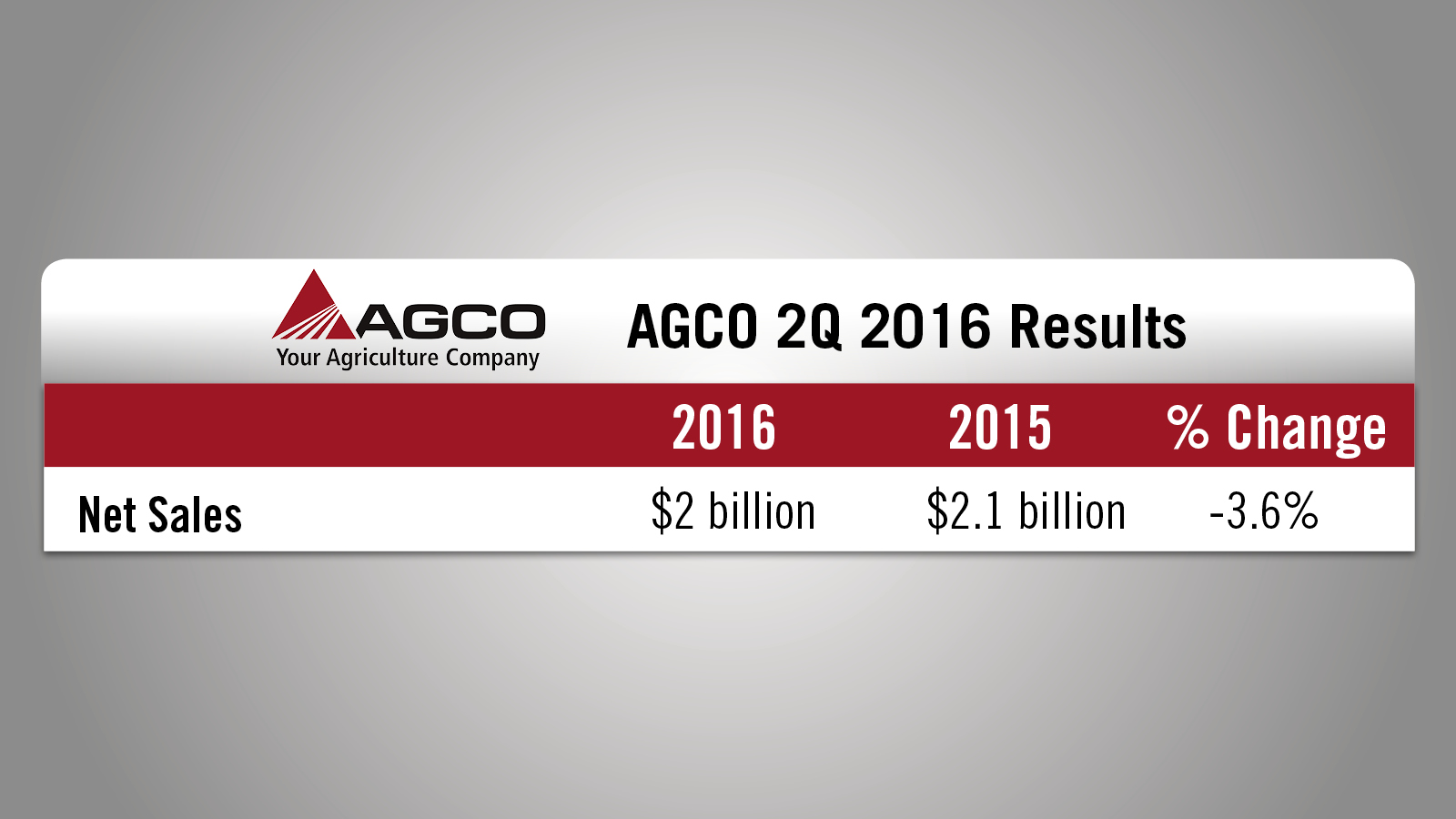 Trimble released its second quarter 2016 report on Aug. 2. The company saw increases in revenue despite the relatively low demand for agricultural equipment in the global market. Second quarter revenue was up 4% to $609.6 million compared to the second quarter of 2015. Revenue for the Field Solutions division, which includes sales of ag equipment and systems, was flat at $87.1 million. 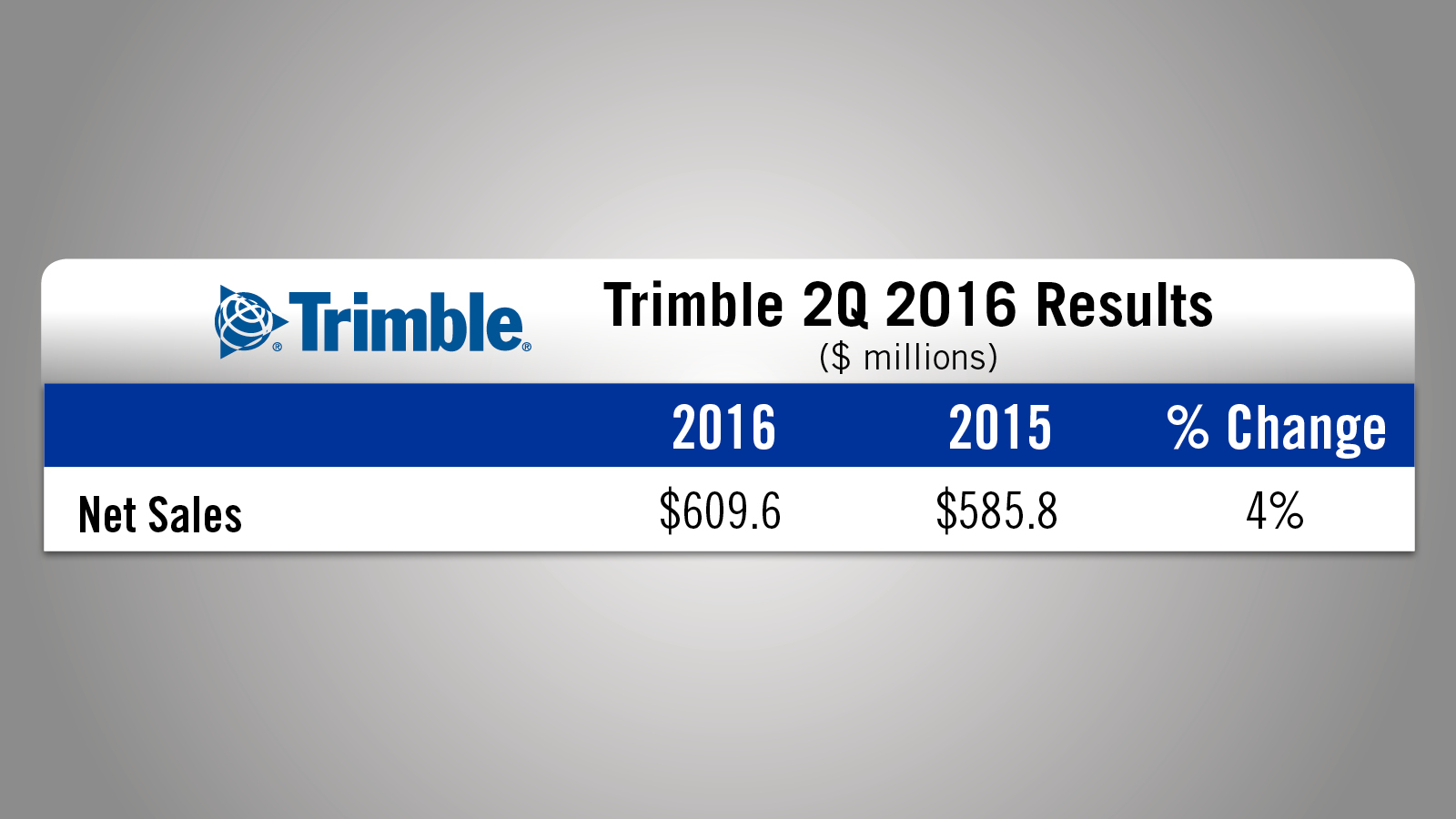 President and CEO of Trimble, Steven Berglund said, “Second quarter results were consistent with expectations and reinforce the trend toward higher revenue growth. Although Brexit and the outcome of the U.S. elections have introduced new uncertainties, we continue to anticipate higher growth in the second half of 2016, which is expected to carry into 2017.”

He adds: “Our belief in the medium to long-term picture for agriculture remains buoyant as it utilizes more data and information for making decisions. We believe we currently have both unique insights and an advantage participation in the market.”

A key element of success will be the go-to-market strategy to bring these capabilities to the farmer. Actions during the quarter included the establishment of a new organizational structure, which more clearly differentiates our agriculture software and information capabilities from sensors and hardware applications and enables tighter market focus. In addition, we further enhanced our go-to-market capabilities by announcing a number of new Vantage dealers.

Trimble expects third quarter revenues to be between $587 million and $617 million, compared to revenues of $562 million during the third quarter in 2015.

Alamo’s agricultural division saw a decrease in net sales of 2.1% in the second quarter to $51.8 million.  Agricultural net sales for the first half were down 0.9%. 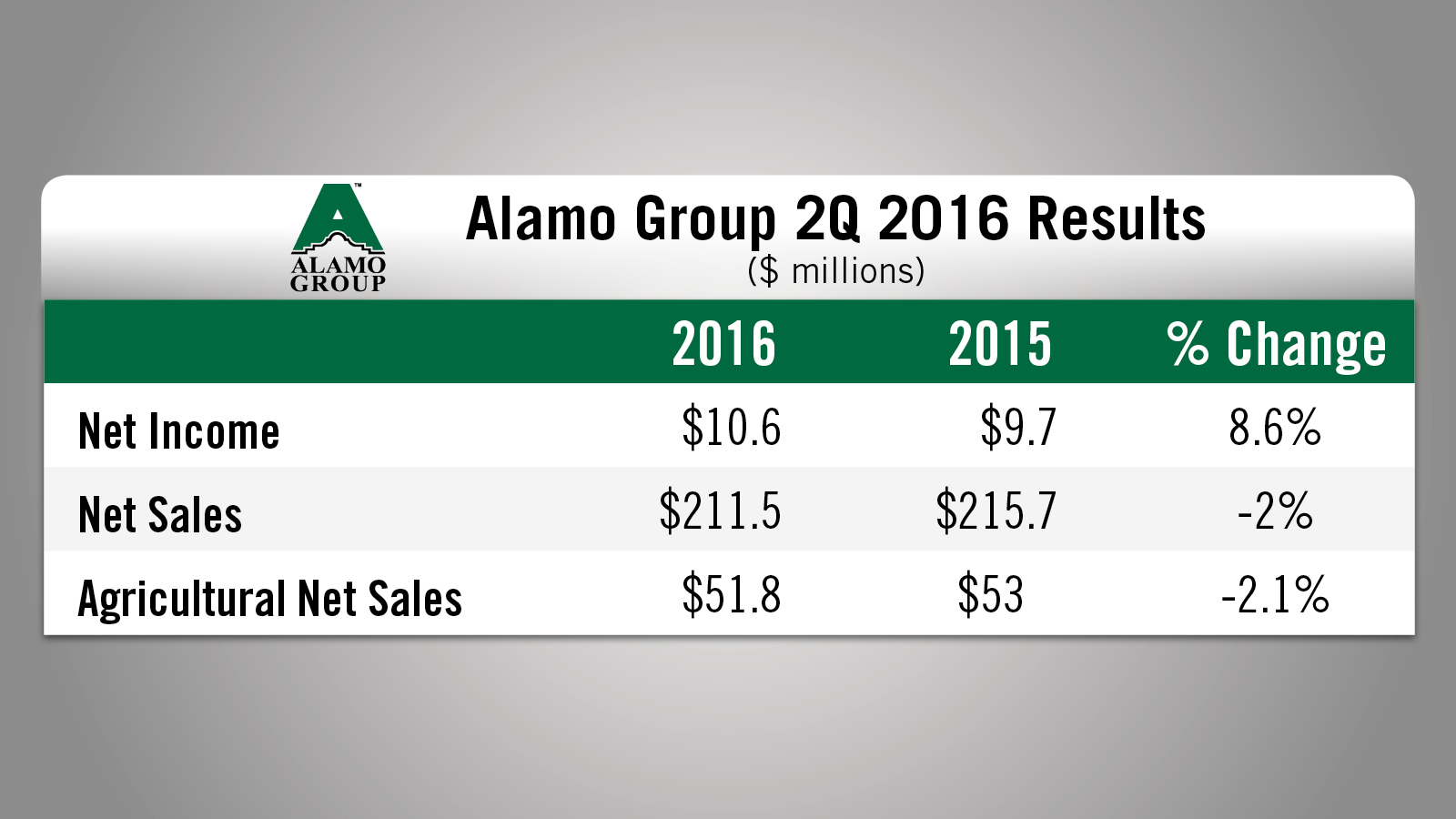 The president and CEO of Alamo, Ron Robinson, said, “We do not see much strengthening in Alamo’s sales in the second half of 2016, but feel the prospects of 2017 and beyond hold more reasonable growth potential.”

Kinze debuted its new tractor, nicknamed "Big Blue" at the 1974 Farm Progress Show in Iowa.  At the show Kinze owner Jon Kinzenbaw appeared to get his new equipment stuck in the dirt, causing the crowd to talk and believe Kinze had failed with this behemoth tractor. Instead Kinzenbaw talks how he was just killing time with his new tractor and after appearing stuck, he simply switched to the back engine and was able to get out of the dirt. Big Blue was 20-ton eight-wheeled tractor with 600 horsepower and four wheel drive. It was the combination of two John Deere 5020 chassis tractors and was originally called Double Trouble.

As always we welcome your feedback. You can send comments or story suggestions to kschmidt@lessitermedia.com. Thanks for watching, I’ll see you next time.

Will Maryland Be the First State to Pass Right to Repair Legislation?