The latest episode of On the Record is now available! In this week's episode we discuss Deere's plans to address leasing concerns, the economics of robotic implements and the likelihood that the third installment of the Market Facilitation Program payments will be made. Also in this episode, an exclusive interview with Nebraska Gov. Pete Ricketts while in Germany as part of a trade delegation and a look at what dealers thought had a bigger impact on machinery sales in 2019 — trade or weather.

This is our last episode of On the Record for 2019. From all of as at Ag Equipment Intelligence, have a Merry Christmas and a prosperous New Year!

The major farm equipment manufacturers have turned to leasing machinery to offset declining demand for their equipment. According to an October Wall Street Journal report, more than one-third of the financed purchases of Deere high horsepower tractors and construction equipment are being leased to farmers and builders. Leasing levels are about double the rate they were in 2012, when the U.S. farm equipment market was booming because of high crop prices. The report also pointed out that more than 40% of the high horsepower tractors CNH has sold annually in the U.S. since 2014 have been leased, up from 25% in 2012. 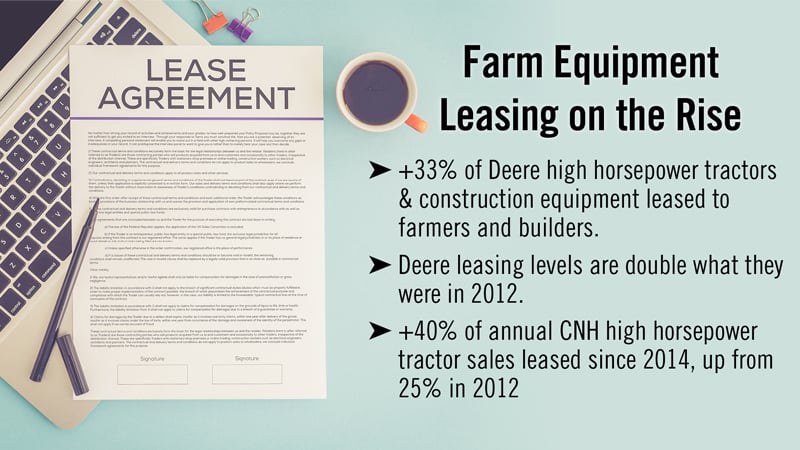 High levels of lease returns contributed to bloated used equipment inventories for dealers following a drop off in new equipment sales starting in 2014. Deere says it has taken steps to avoid a replay of that scenario.

During a conference call with analysts following the release of its fiscal year 2019 fourth quarter earnings, John Lagemann, Deere’s senior vice president of ag & turf sales and marketing, said, “Although the overall used equipment market continues to be quite stable, our lease return rates remain at elevated levels. At the same time, we’ve taken actions to reduce our matured lease inven­tory. First, we’ve adjusted lease residual values to better reflect the current environment. Next, we’ve announced changes to our leasing program that will include a risk sharing mechanism with our dealers to ensure alignment. And lastly, we will realign our per­formance and incentive structures in order to increase dealer collaboration in our collective remarketing efforts.”

He noted, “[This] will enable us to better leverage the strength of our dealer organization by allowing them to control the inventory in their own area of responsibility. This in turn will also support the evolution of promoting production systems vs. individual products, because they can better manage their customers’ trade cycles.

This week’s Dealers on the Move include S&H Farm Supply and Eliff Motors.

New Holland dealer S&H Farm Supply announced plans for a new location in Branson, Mo. This will be the 5th location for S&H.

Elliff Motors announced it is building a new Kubota dealership in Harlingen, Texas.

Evaluating the Economics of Robotic Implements

The logic of bigger is better with ag machinery comes with operational and economic considerations. Farmers have to weigh the efficiency of covering more acres with the cost of purchasing larger equipment.

So at what point will ag machinery outgrow its investment value?

It may be sooner that you think, says Cambridge, Ill., farmer Monte Bottens, who suggests that the advancements in equipment automation and robotics could change the equipment purchasing model.

Bottens was part of a farmer panel that participated in Ag Equipment Intelligence’s 2020 Executive Briefing virtual summit. He shared his thought process on a movement toward farming as a service and away from the traditional buying a trading of large ag equipment.

“As a farmer, I look at how much loss and depreciation I get. It's really getting to a point where it isn't worth it. Can we have robotic harvesters, robotic planting equipment come in and we pay. When I look at pricing out to lease a tractor right now, $33,000 a year for 450 hours. I look at the number of acres it's going to run over, and it's like, Huh, that's $16, $15 an acre. That's $15 an acre, now I got to put an implement on that kind of stuff. Can I go ahead and just pay a service to come in, $35 an acre, plant my crops and done and robotic. I think that's the way we’ve got to look at it, is farmers don't need to buy a tractor. Farmer needs a crop, so we’ve got to think about the end goal. I know on healthy soil, I'll like maximized yield with maximized profit. If I have to buy a tractor today to do it, I'll buy that tractor. Tomorrow, if I don't have to buy that tractor, and I can just lease or hire, or rent somebody to do that, that requires less capital and less of a balance sheet.”

You can learn more about the 2020 Executive Briefing and how to access archived recordings from the virtual event at AgEquipmentIntelligence.com.

Will There Be a Third MFP?

So far, $10.3 billion of the $14.5 billion of USDA’s 2019 Market Facilitation Program has been paid out to farmers. According to Agri-Pulse, the ag agency will decide in January whether to issue the third part of the program. But there’s no guarantee that farmers will see the other $4 billion or so of the payments designed to compensate those impacted by trade disputes.

This is because the recent U.S.-China trade agreement, which reportedly includes between $40-$50 billion in agricultural purchases, could result in USDA holding off on issuing the third  tranche of the program.

Ashish Gupta, analyst with Stephens, said in a note, “With a phase one trade deal announced we wonder if Deere's guidance (down 5% for fiscal year 2020) will end up being conservative, or if the lack of market facilitation payments will end up being a headwind in 2020. A potential 3rd payment could occur in January, getting farmers to the $14.5 billion budgeted. However, farmers may not receive any other payments in 2020. Former USDA Chief Economist Joseph Glauber estimates U.S. farmers will have a $10.7 billion net income benefit in 2019. We do not believe Chinese purchases will be enough to offset lost MFP,” said Gupta. “If there are no further payments, we worry 2020 U.S. Large Ag could end up being worse than the down 5% [that Deere projected].” 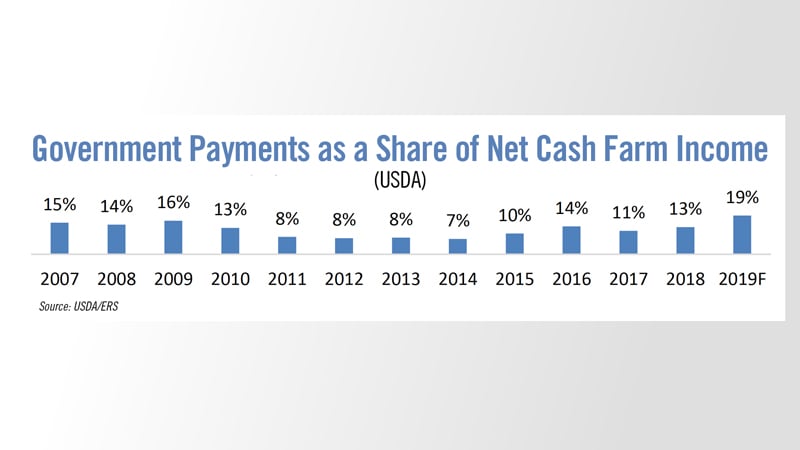 Gupta also noted that, as of Dec. 16, China had not confirmed that they would make the $40-$50 billion in agricultural purchases.

“Whether net income comes from MFP, crop receipts, PLC or ARC payments, we think farmers use net income to buy equipment,” said Gupta. “We believe profitable farmers are potential equipment buyers looking to shield taxes, regardless of the source of income. Thus, with the removal of MFP, we think there is downside risk to [current] equipment demand forecasts.” 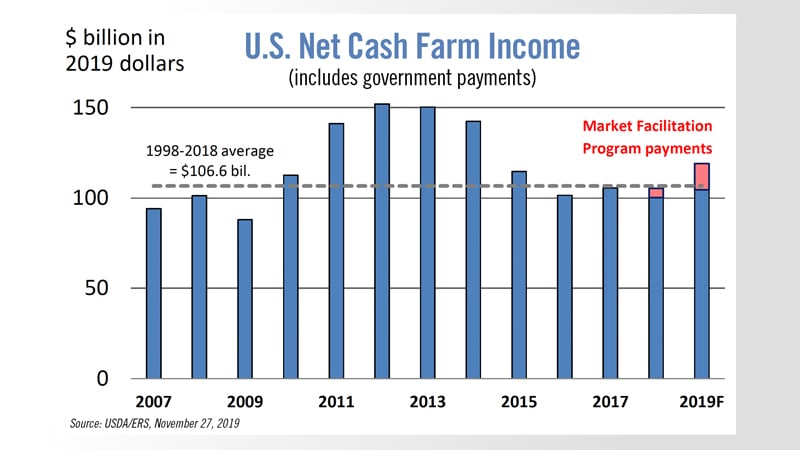 According to USDA’s Economic Research Service’s most recent report, the 2019 forecast for net cash farm income is $119 billion. But the Farm Credit Administration says based on the USDA’s historical forecast accuracy, farm income could be as low as $115.1 billion or as high as $136.2 billion.

Ag Equipment Intelligence got an exclusive interview with Nebraska Governor Pete Ricketts while touring the Claas Harswinkel factory in Germany. He was there as part of a trade delegation.

The purpose of the trip was to recruit German companies that may be interested in doing business in the U.S. to do so in Nebraska. Ricketts says the relationship the state has with Claas adds credibility to those discussions.

According to Ricketss, ag and manufacturing are the top two industries for Nebraska and he adds they have the second best regulatory environment in the states. Workforce is a big concern for manufacturers, and Ricketts says the state is putting a large focus on developing its workforce.

These programs that Nebraska is working on are also benefiting dealers who are facing similar workforce challenges. Students who go through these classes and certifications are being shown there is a career path for them.

Ricketts adds that other states, particularly in the Midwest, are starting similar initiatives to ensure people are prepared for these types of jobs,  He says getting a correctly trained skilled workforce for hire is a key competitive advantage.

More ag equipment dealers believe the cold, wet weather that resulted in later than normal planting season, or prevented planting altogether, had a bigger impact on their business this year than did the ongoing trade wars. But both clearly impacted ag machinery sales in the past year in the eyes of the dealers. 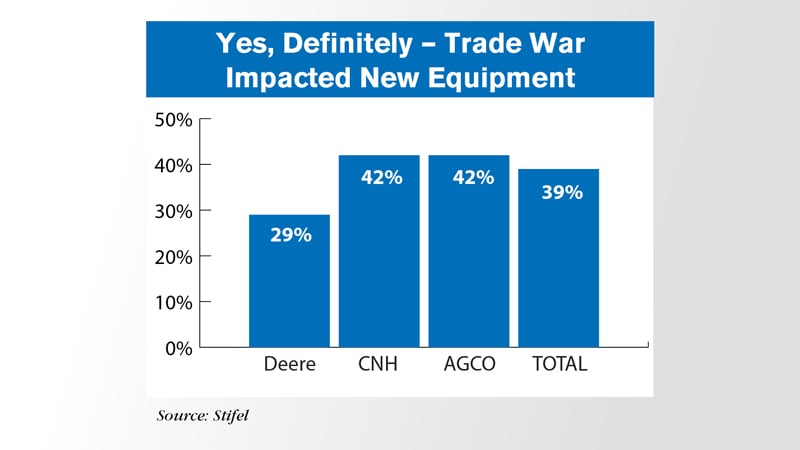 This is according to the responses of about 150 dealers who responded to a survey by investment banking firm Stifel.

Overall, weather issues outweighed trade issues in their effect on farm machinery sales in the past year. Some 51% of dealers said delayed plantings “definitely” impacted new equipment demand in 2019. Another 30% said weather had “some” level of impact, while 19% felt it didn’t have “much of an impact.”

The trade war with China and other trade issues “definitely” impaired ag equipment sales in the past year, according to 39% of dealers. Another 38% believe trade disputes had “some” level of impact, while 23% believe it did not have “much of an impact.” 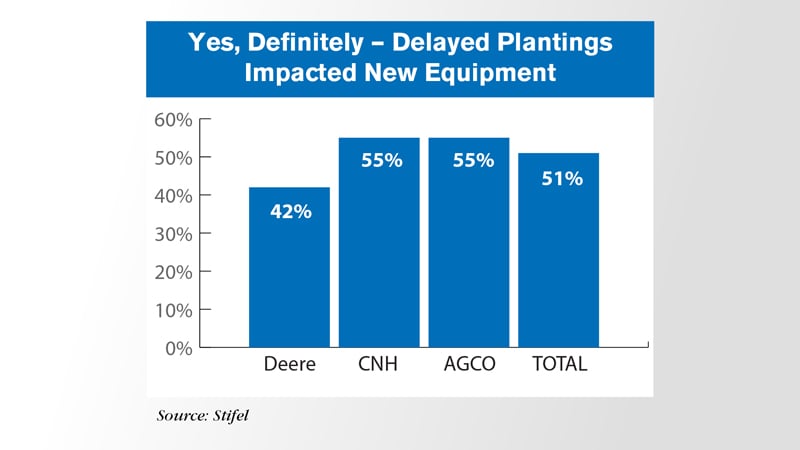 On average, Deere dealers felt that the trade war and delayed plantings had less of an impact on new equipment demand compared to CNH Industrial and AGCO dealers. Slightly less than 30% of Deere retailers reported a “definite” impact on their business levels from the trade disputes that were prominent in the past year. This compares to 42% of Case IH and New Holland dealers and the same percentage of AGCO dealers.

More than 40% of Deere dealers reported that delayed plantings “definitely” had a significant effect on new equipment demand in 2019. At the same time, 55% of CNH Industrial and AGCO dealers believe weather conditions that created problems for farmers getting their crop in the ground had a “definite” impact on equipment sales for the year. 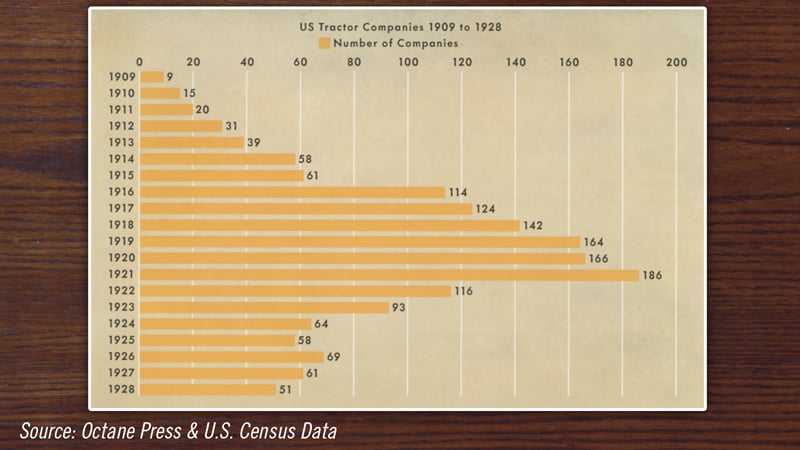 The early part of the 20th century  saw exponential growth in the number of U.S tractor manufacturers. In 1909 there were just 9 companies manufacturing tractors in the U.S. That number peaked at 186 in 1921 and by 1928 had dropped back down to 51. Today, there are arguably only 3 U.S. tractor companies remaining — John Deere, CNH Industrial and AGCO.

As always we welcome your feedback. You can send comments and story suggestions to kschmidt@lessitermedia.com. From all of us at Ag Equipment Intelligence, have a Merry Christmas and a Happy New Year!