In this week’s episode of On the Record we discuss a “youth movement” among Deere & Co.’s senior leadership. In the Technology Corner, Jack Zemlicka discusses broadband barriers to telematic transformation. Also in this episode: grower sentiment falls, but USDA’s Economic Research Service reports net farm income is forecast to increase 8.1% in 2019; Alamo Group’s 2018 sales hit $1 billion for the first time and Ag Growth International acquires IntelliFarms.

‘Youth Movement’ at the Top of Deere

Deere & Co. has announced changes to its leadership team, and it appears there’s a youth movement taking place at the top. The board of directors elected John May president and chief operating officer, effective April 1. May is just 49 years old. 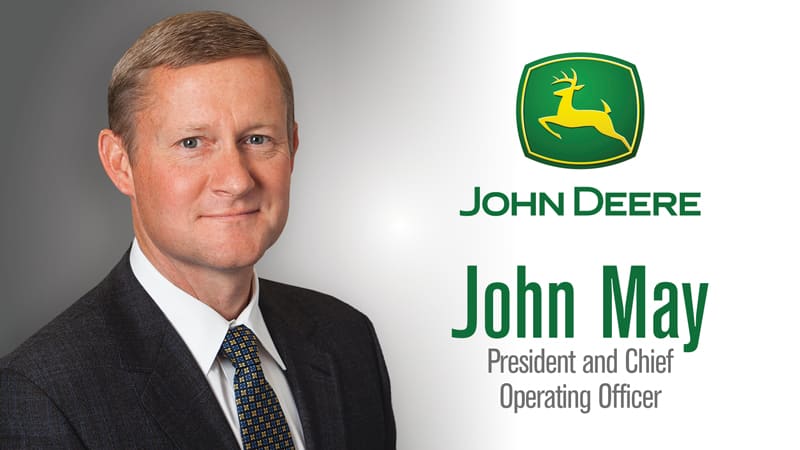 He will be responsible for leading Deere’s efforts to maximize operational performance throughout the company.

He has been with Deere for 22 years and joined the senior management team in 2012 as president, agricultural solutions and chief information officer.

Last year, he was named president, Worldwide Agriculture & Turf Division, with responsibility for the Americas and Australia, the global harvesting, turf and utility, and crop care platforms, and the intelligent-solutions group. 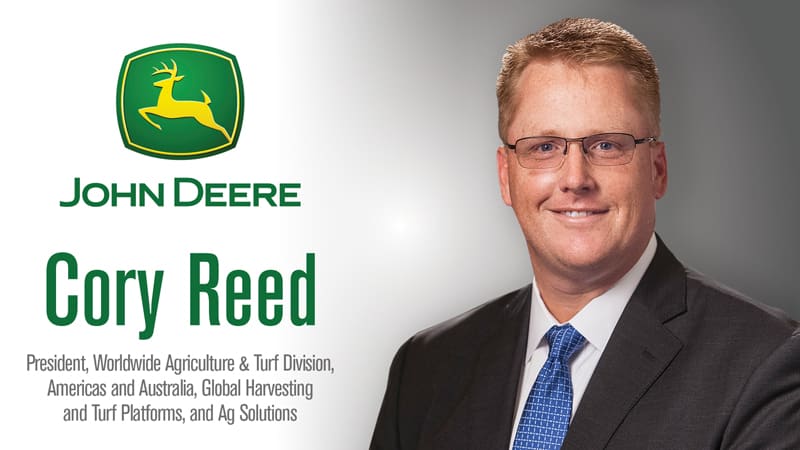 Cory Reed will take over the position of president, Worldwide Agriculture & Turf Division, Americas and Australia, Global Harvesting and Turf Platforms, and Ag Solutions. Reed joined the company in 1998 and, most recently, has been president, John Deere Financial. He is only 48 years old.

This week’s Dealers on the Move include Heartland Ag Systems and MirTech Harvest.

One of the key aspects to advancing wireless machine-to-machine communication is the capability to have reliable cellular coverage, especially in rural areas.

As manufacturers, developers and engineers refine the performance of next-generation tools to be field-ready, steps need to be taken to ensure new automated or sensing technologies are well connected.

Dr. J. Alex Thomasson, professor in the Department of Biological and Agricultural Engineering at Texas A&M University, notes that the real difficulty is in the lack of infrastructure to support real-time and rapid communication of large data sets in rural communities.

We caught up with Dr. Thomasson at the recent Agricultural Engineering Technology Conference in Louisville to get his outlook for improving rural broadband capabilities as a pathway to telematic adoption.

“Recently, the U.S. Department of Agriculture has been interested, and is beginning to support the growth of broadband into rural areas in the U.S., which I think is a great thing. My sense though, is that they’re predominantly thinking about rural businesses and residences and they’re not considering the field level, broad scale availability of broadband wireless. So I think we’ve got to ultimately come up with different infrastructure solutions. To be honest with you, it’s probably too expensive to ever have 5G coverage everywhere in the country, but there are ways we can develop systems that are point-to-point, that are roving systems, on some of these machines and that's some of the technology that we’re going to see develop over the next 5 to 10 years.”

Dr. Thomasson adds that while the digital groundwork is already in place in many respects, it’s going to be a matter of deciding the most affordable approach to implementation.

Alamo Group, manufacturer of infrastructure and agriculture equipment, reported its net sales were up nearly 11% in 2018, surpassing the $1 billion mark for the first time in the company’s history. Alamo also reported record net income of $73.5 million, which was up 65.8% vs. 2017. Three 2017 acquisitions added $64.9 million in net sales and $5 million in net income in 2018. 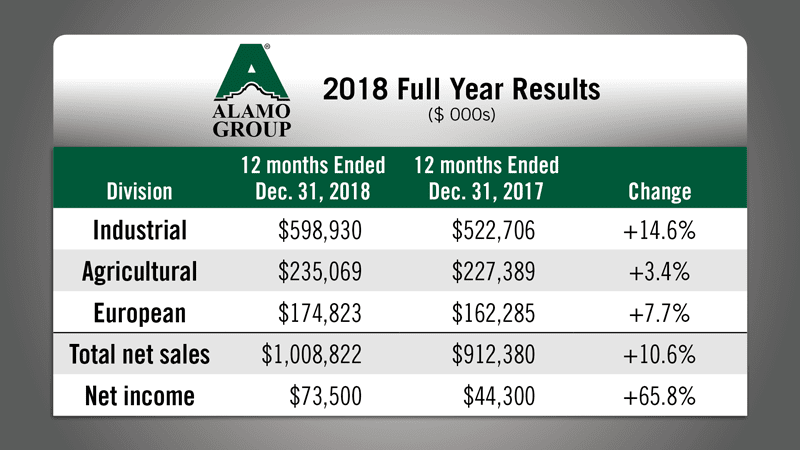 For the fourth quarter, the company posted net sales of $256 million and net income of $16.6 million, which was up 412%. Both of these were also record setters for Alamo.

Most of the improvement came from Alamo’s Industrial Division, which posted a 14.6% increase for the full year and was up 8.7% in the last quarter of 2018. The company’s Agricultural sales for the full year were up 3.4%, but down 1% in the fourth quarter.

Despite ongoing headwinds in agriculture, Ron Robinson, Alamo Group’s president and CEO, says the company’s Ag Division held up pretty well. “Our sales for the year were up modestly and margins held steady despite the market challenges. Our Bush Hog, Rhino and Schulte operations all produced solid results for the year though we are concerned the market conditions are likely to continue to constrain results as we move into 2019.”

Alamo also reported that it closed on the Dutch Power Company B.V. acquisition. The Netherlands firm manufactures a variety of landscape and vegetation management machines and attachments.

The February Purdue University/CME Group Ag Economy Barometer, which is an index measuring the health of the U.S. ag economy, showed slight declines, going down 7 points to 136 compared from 143 in January. The Index of Current Conditions dropped from 132 in January to 119 in February and future expectations fell 3 points in February to 145. 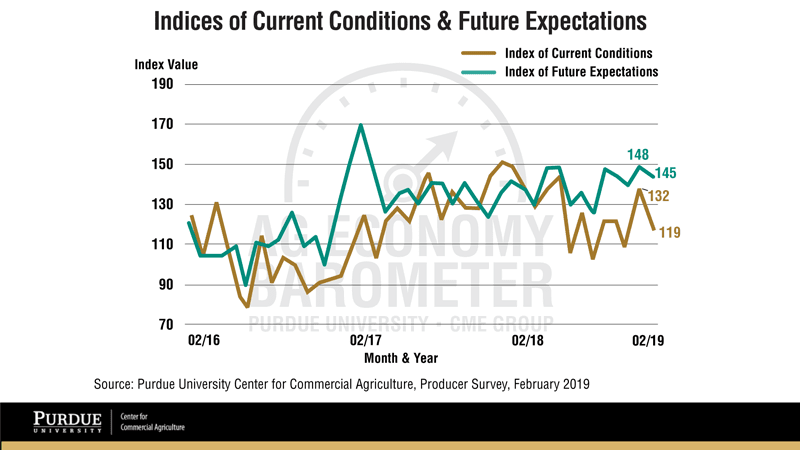 Similar to the decline in farmer optimism, attitudes toward large investments, which includes machinery purchases, also faded according to the Large Farm Investment Index, dropping to 50 points in February, a 12-point fall from the previous month. 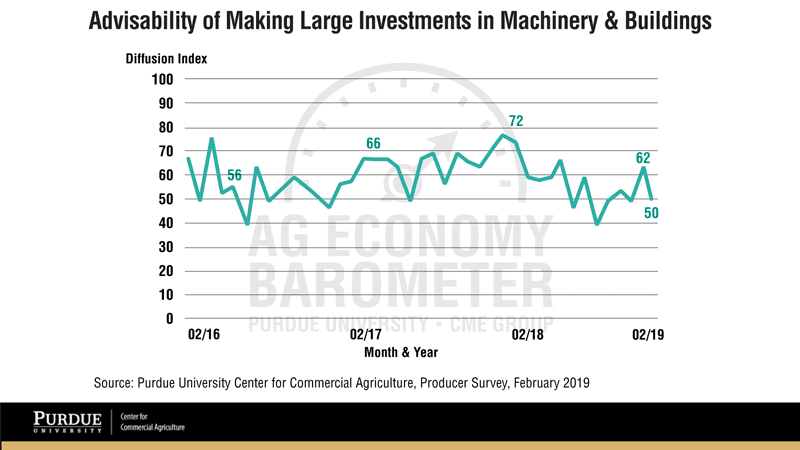 The report’s authors said since the payments from the Market Facilitation Program are complete, farmers’ attitudes toward making large investments has fallen. Overall farm equipment sales in January were up in comparison to the previous year with U.S. high horsepower tractor sales up 5.3% and U.S. combine sales up 14.5%. 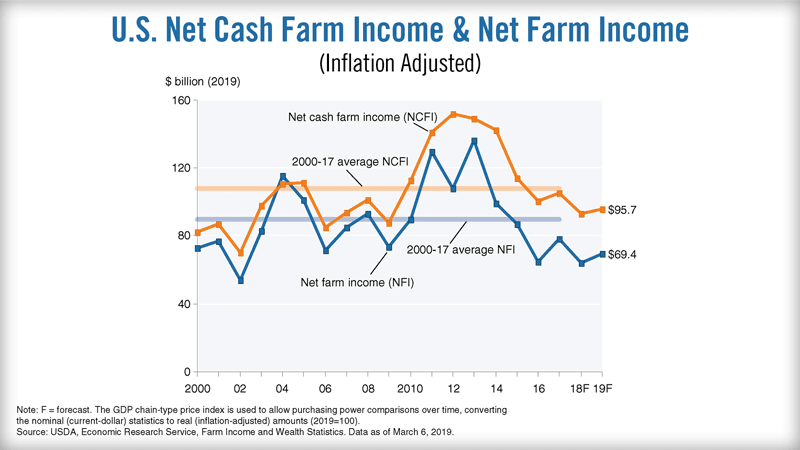 ERS says the 2019 forecasted increases are due to a combination of lower production expenses, which are subtracted out in the calculation of net income, and increases in the value of agricultural sector production. These factors contributing to higher income are expected to more than offset the forecast decline in direct Government farm payments. If forecast increases are realized, net farm income and net cash farm income would be 22.9% and 11.5% below their respective averages calculated over the 2000-17 period.

Ag Growth International, the Winnipeg-based manufacturer of equipment and systems to store, blend, convey and process seed and grains, has acquired Intellifarms. Intellifarms provides technology-based products (hardware and software) for monitoring grain conditions in storage for growers and grain processors.

Founded in 2001 and headquartered in Archie, Mo., IntelliFarms offers a technical expertise in sensor technology, embedded electronics and Internet of Things (IoT) infrastructure for grain storage and bin management.

“Overall, we view the acquisition of IntelliFarms as positive, as it serves to expand AGI’s controls, technology and project management capabilities,” David Newman, analyst with Desjardins Capital Markets, said in a note. “The acquisition is in line with company’s growth strategy of becoming a global provider of bundled solutions to farm and commercial customers.”

The first Steiger tractor was inspired by a Wagner tractor, authorized by an optimistic banker and built by a hands-on family of farmers. John Steiger and his sons Douglas and Maurice grew up farming in northwestern Minnesota. Struggling with low farm prices and heavy rain, the Steigers survived by running heavy equipment for other farmers for cash. The farm required two or three men to run the family’s 40 horsepower International tractors during harvest. The Steigers became aware of the 100-plus horsepower Wagner tractor and saw that with such a machine, John Steiger could do most of the field work on his own, and the boys could focus on contract work to keep the cash flowing. 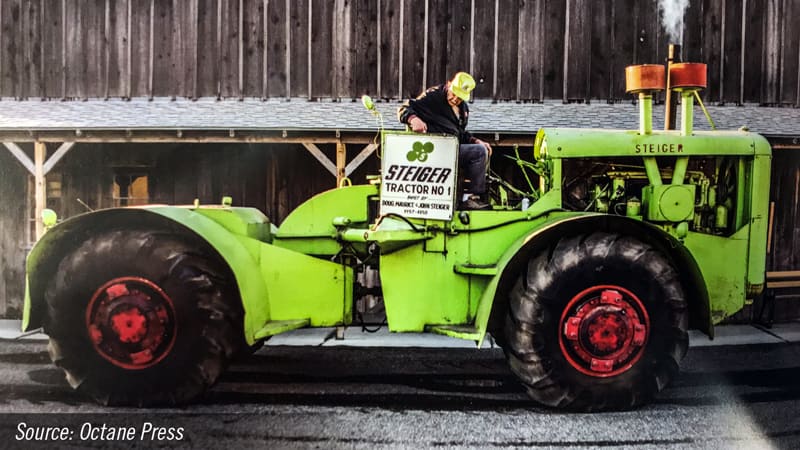 Douglas asked the president of the Union State Bank for a loan of $20,000 to buy a new Wagner tractor. He also suggested that with a loan of only $10,000 he and his family believed they could make such a machine in their shop. The bank told them to build and during the fall of 1957 and winter of 1958, the Steigers worked day and night to create Steiger No. 1 , wrapping a hand built frame, power divider and more around a 426 cubic inch GM 6-cylinder diesel pumping out 200 horsepower.

The family started building smaller tractors for the neighbors, and in 2 decades their green machines would become an industry-leading, high-technology 4WD tractor.