Are Bobcat and Farmtrac Tractors Returning to the U.S.?

The latest episode of On the Record is now available! In this week's episode we discuss two tractor lines that had disappeared from the U.S. market — Bobcat and Farmtrac — that are set to make a return. In the Technology Corner Jack Zemlicka discusses dealers' 5-year precision revenue outlook. Also in this episode, Deere & Co.'s third quarter earnings report and Cervus Equipment's second quarter earnings.

Bobcat & Farmtrac Tractors Back in the U.S.A.

Two tractor lines that disappeared from the U.S. market say they’re back to give it another try.

Bobcat, maker of the iconic skid steer loader, announced it is set to return to compact tractors this year and is aiming for sales of about $165 million annually, or about a 5% market share of the compact tractor market within the next 5 years. 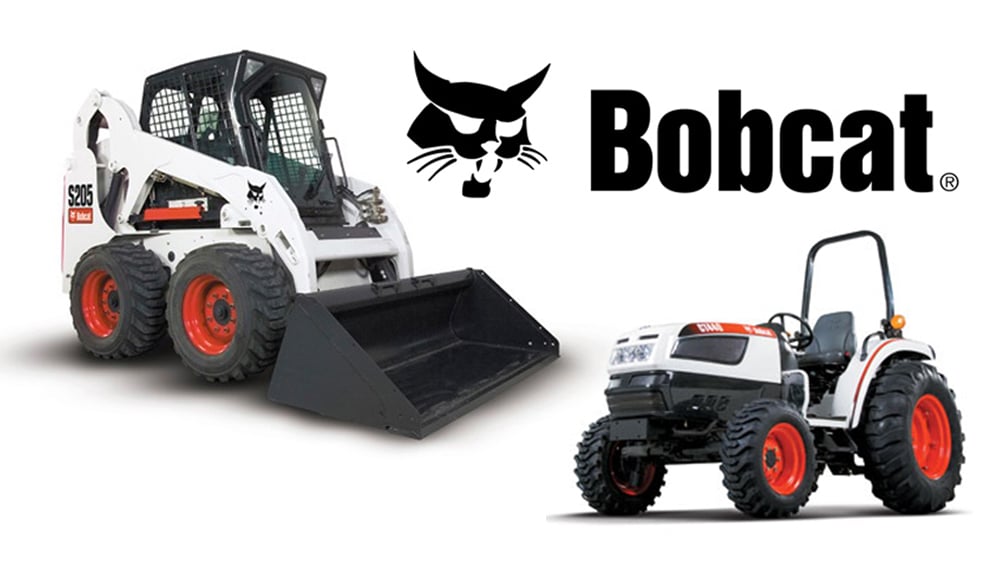 In 2008, following the acquisition of Bobcat from Ingersoll Rand by South Korean manufacturer Doosan Infracore, the company launched the Bobcat tractor. But failure to make headway during a challenging period for tractor sales resulted in the 2012 decision not to renew the initial 5 year supply contract with LS Mtron.

This time, Doosan Bobcat will be working with Daedong Industries, the manufacturer of Kioti brand tractors, to produce the new Bobcat tractor line.

In a statement, the company said, “The compact tractor market is the largest segment in the global compact equipment industry. For Doosan Bobcat, it will be one of the most important sectors that will serve as a bridgehead to realize economies of scale.”

Escorts, the Indian manufacturer of construction and ag equipment, is also moving back into the U.S. market with its Farmtrac tractor line.

At one time, Escorts, which had acquired the line from Long Agri in 1986, had an assembly plant for the tractors in North Carolina, but went into receivership in 2008. It abruptly abandoned the U.S. market leaving dealers trying to service customers with no parts and no backing of service warranties.

North Carolina court documents show Farmtrac owing LS Mtron more than $12 million at the end of February 2008 as the result of an alleged over-ordering “channel stuffing” scheme, with floorplan finance channeled to the parent group to bolster its figures. This has reportedly been settled. 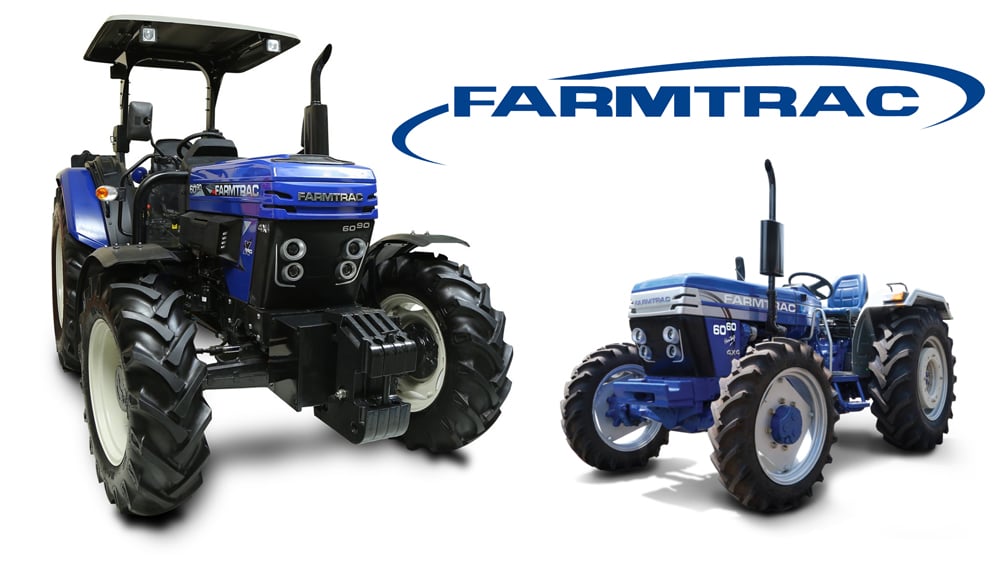 The Indian manufacturer has returned to North America under the auspices of Farmtrac U.S., which is located in Collins, Miss., with a range of 40-60 horsepower tractors sold through a dozen dealer outlets in Mississippi and neighboring Louisiana and Alabama.

This week’s Dealers on the Move are Troxel Equipment and Tri Green Tractor. The Indiana John Deere dealerships announced plans to merge, creating Troxel Tri Green. The merger will go into effect on Sept. 5, 2019. The dealership will have 9 locations.

2019 has seen interesting new developments in market sentiments, with dealers continuing to slowly move away from hardware and steer business objectives toward data management for future revenue, according to the seventh annual Precision Farming Benchmark Study. 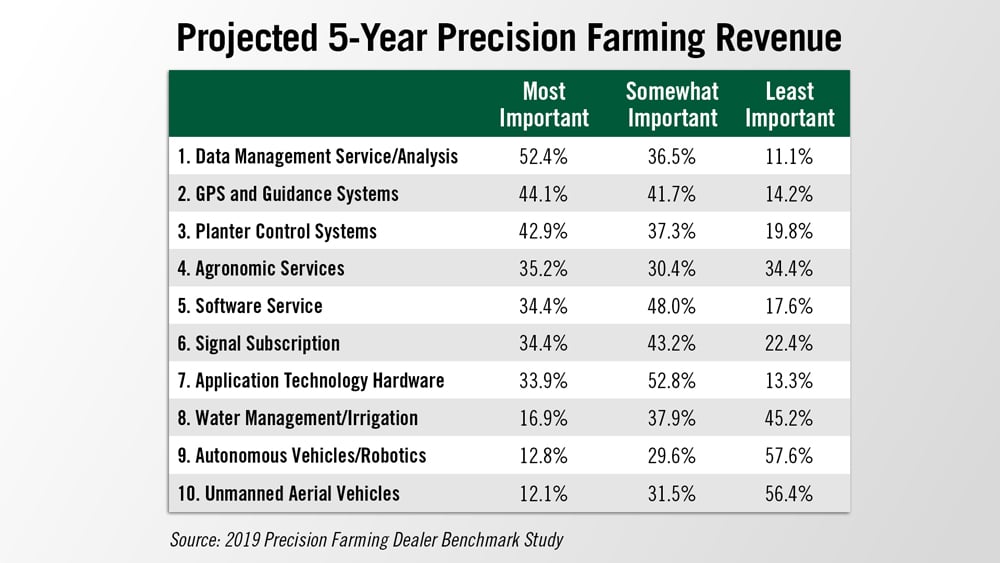 More than half of responding dealers identified data management and analysis as their most important area to grow precision business during the next 5 years. Only about 11% marked it as “least important,” the lowest total among the 10 areas included in the study.

Furthering the notion that dealers are targeting revenue opportunities connected to, but solely reliant on equipment sales, were priority shifts in planter control systems and application technology.

Both areas have historically ranked near the top of dealers’ lists of future revenue drivers, but planter systems placed third and application tech was seventh in the 2019 study.

But there were also indicators that precision hardware sales will be a key contributor to revenue growth for dealers. GPS and guidance systems ranked as the second most important area for 5-year revenue projections among dealers, after ranking sixth on the list in 2018.

Perhaps the most interesting shift was a decline in dealers who viewed agronomic services as a critical part of their business in the future. After more than 43% voted the area “most important” in 2018, just 35% had the same outlook in 2019. Additionally, more than one-third of dealers voted it “least important”, compared to about 21% in 2018. 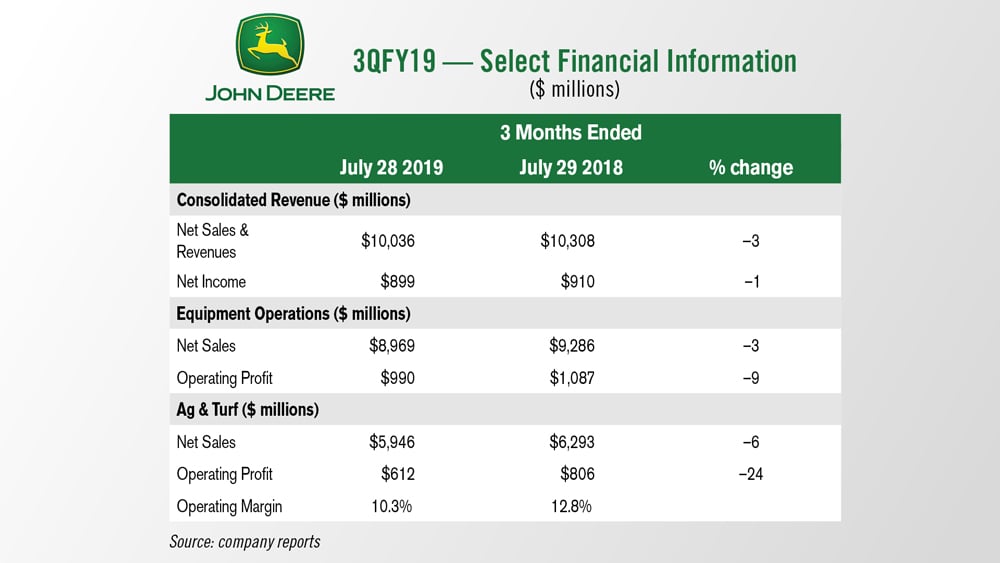 CEO Samuel R. Allen said uncertainty in the agricultural sector was a major factor in the decrease in revenue. “Concerns about export market access, near term demand for commodities, such as soybeans, and overall crop conditions have caused many farmers to postpone major equipment purchases,” he said .

The decline in Ag & Turf sales was due to lower shipment volumes and the unfavorable effects of currency translation, partially offset by price realization.

Company equipment sales are projected to increase by about 4% for fiscal year 2019 compared with 2018. Included is a negative foreign-currency translation effect, hitting Deere’s 2019 net sales forecast for about 2%. Net sales and revenues are projected to increase about 5% for fiscal 2019, and net income attributable to Deere & Co. is forecast to be about $3.2 billion.

Cervus Equipment, Canada’s largest John Deere dealership group, reported on August 8 that overall revenue decreased 20% in the second quarter, with reduced equipment sales in its Agricultural segment comprising the majority of the decline. 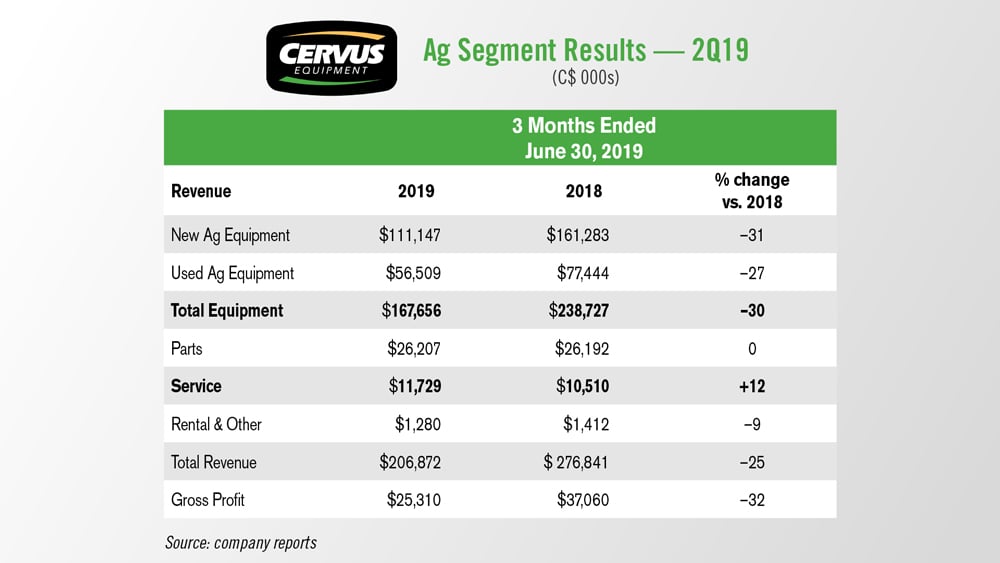 Equipment revenue declined 26% across the company, including a 30% decrease in its Agriculture segment to $167.7 million. For the second quarter of 2019, total ag revenues fell by 25% vs. the same period in 2018. For the first half of the year, revenues from Cervus’ ag segment were down by 17%.

The dealership reports that “Agriculture producers are facing a number of market headwinds and have responded with caution.” Product support revenue improved across all of Cervus’ operating segments, increasing 4% in the quarter.

Parts revenues for the second quarter were flat year-over-year at $26.2 million, while service saw a 12% increase to $11.7 million. Revenue from rental and other was down 9%.

And now from the Implement & Tractor Archive.. 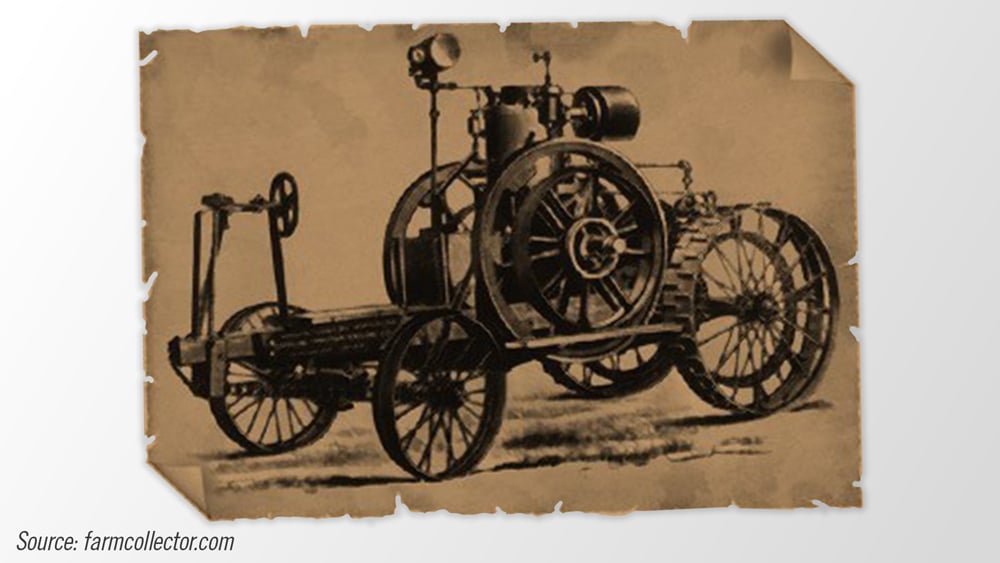 In 1890 about 40-50 labor hours were needed to produce 100 bushels of wheat using a horse-drawn gang plow, seeder, harrow, binder, thresher and horse-drawn wagons. That same year, John Froelich introduced the first gas-powered tractor to the farming industry. The tractor could move at a speed of about 3 mph, required just 26 gallons of gas and threshed over 1,000 bushels of grain a day.