The latest episode of On the Record is now available! In this week’s program, we examine the results of the 12th Annual No-Till Operational Benchmark Study and what the survey found in terms of no-tillers' plans for equipment purchases in 2020. In the Technology Corner Jack Zemlicka discusses the right to repair from a precision technology standpoint. Also in this episode: global tractor sales are on the rise,  an improvement in both dealer and farmer sentiment, Alamo reports ag division sales lag despite a record year in total revenue, and North American sales help Krone’s 5th consecutive year of record revenue.

According to the 12th annual No-Till Operational Benchmark Study from No-Till Farmer, a sister publication of Ag Equipment Intelligence, no-tillers are forecasting an increase in the value of their equipment purchases going into 2020. When asked to breakdown how much their farming operation would spend this year, growers said they expect to spend an average of around $32,000 on equipment, up 7.8% from $29,000 last year. Forecasts on spending for service and parts were flattish for 2020 at around $22,000. 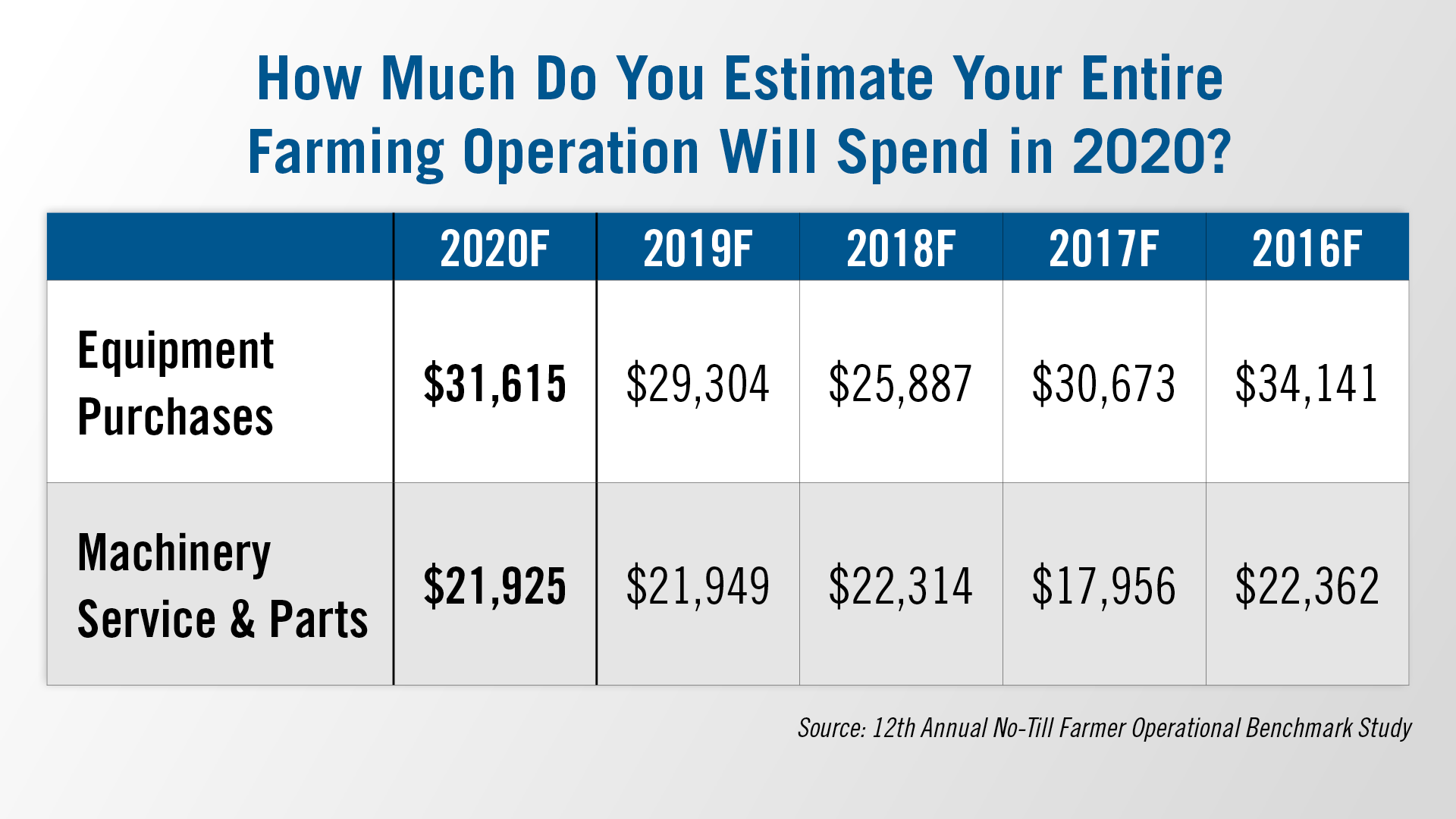 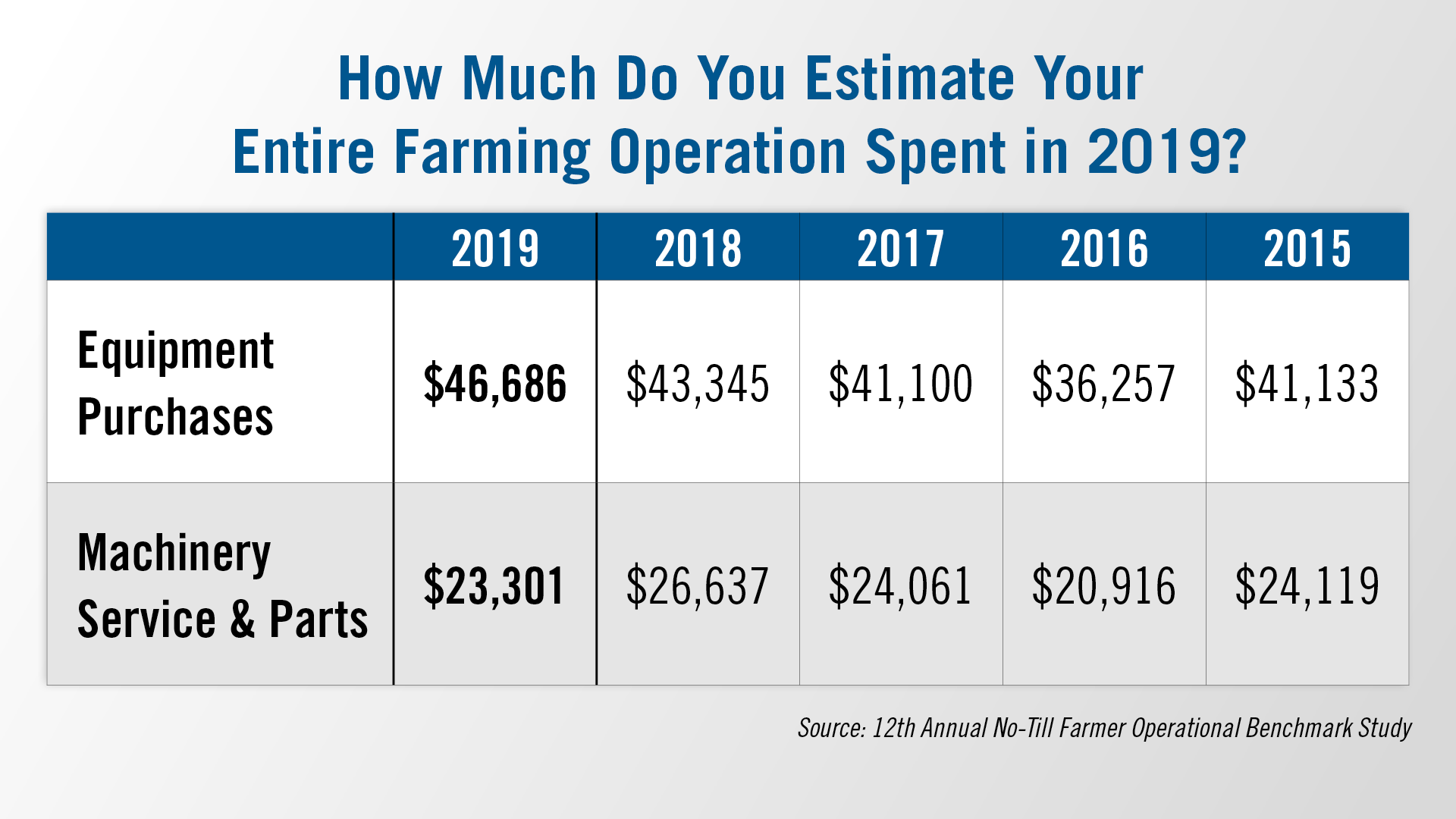 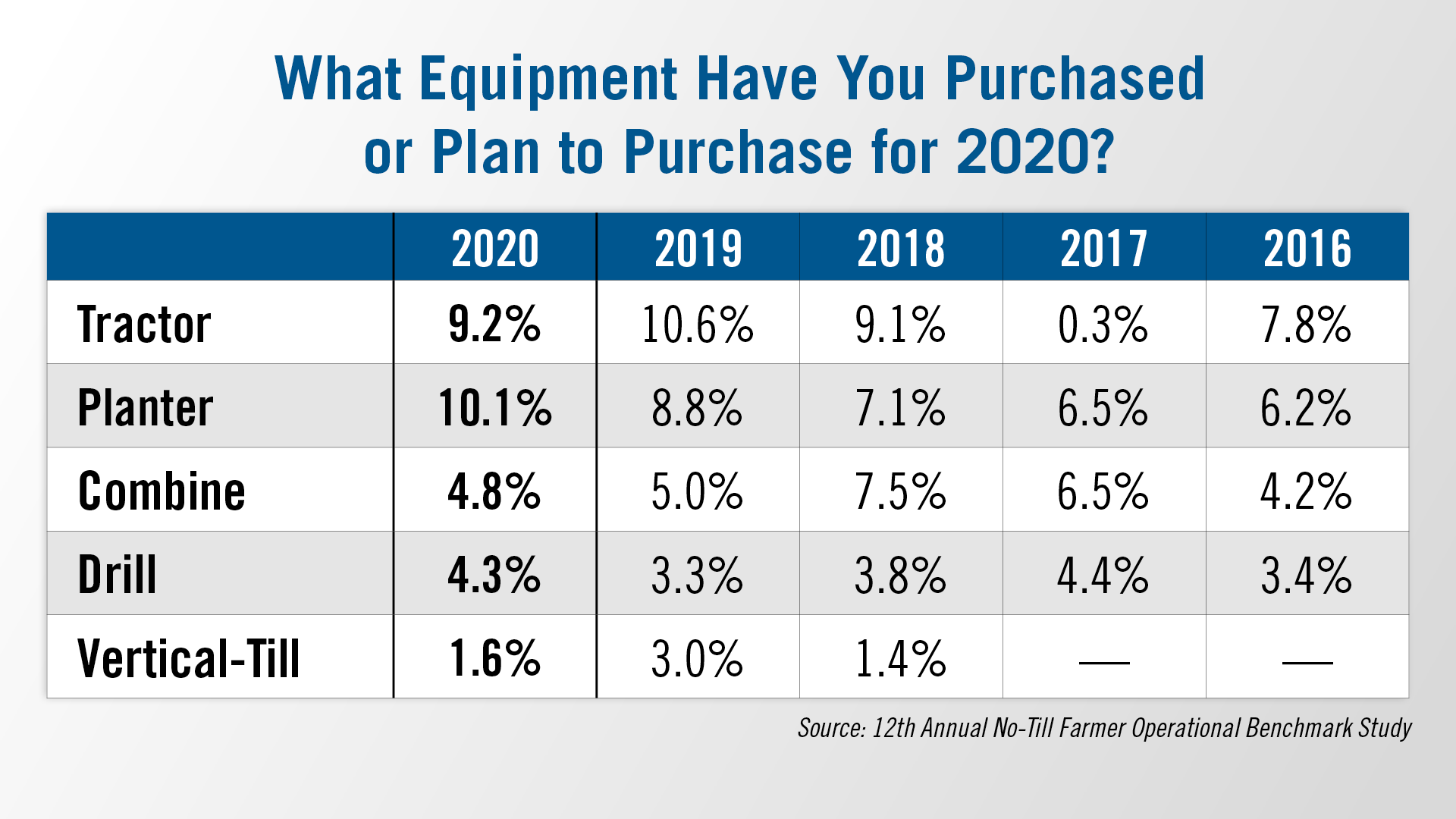 Dealer & Farmer Optimism on the Rise

Two recent reports point to an improvement in both dealer and farmer optimism. Ag Equipment Intelligence’s latest Dealer Sentiments report shows dealer optimism improved to a net +14% in January, an improvement from +2% in December. This is the highest reading since August 2013 when a net 13% of dealers indicated they were more optimistic. 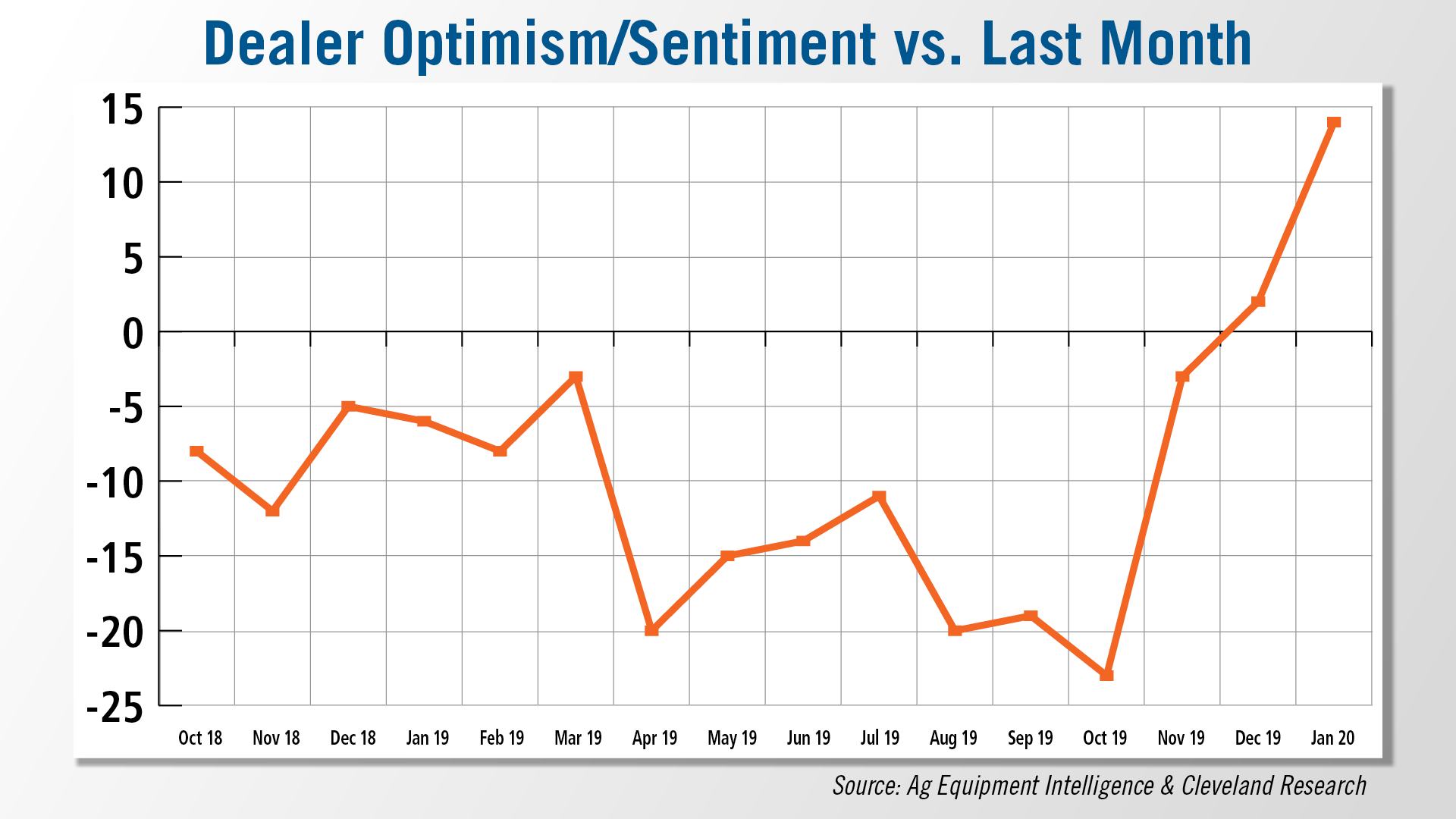 Purdue’s latest Ag Economy Barometer released on March 3 shows farmer sentiment hit an all-time high of 168 in February. The Current Conditions Index also set a new record high in February with a reading of 154, up 12 points from January. Expectations for the future remained strong from a historical perspective, although the Index of Future Expectations reading of 175 represented a 4 point decline from its record high set in January. 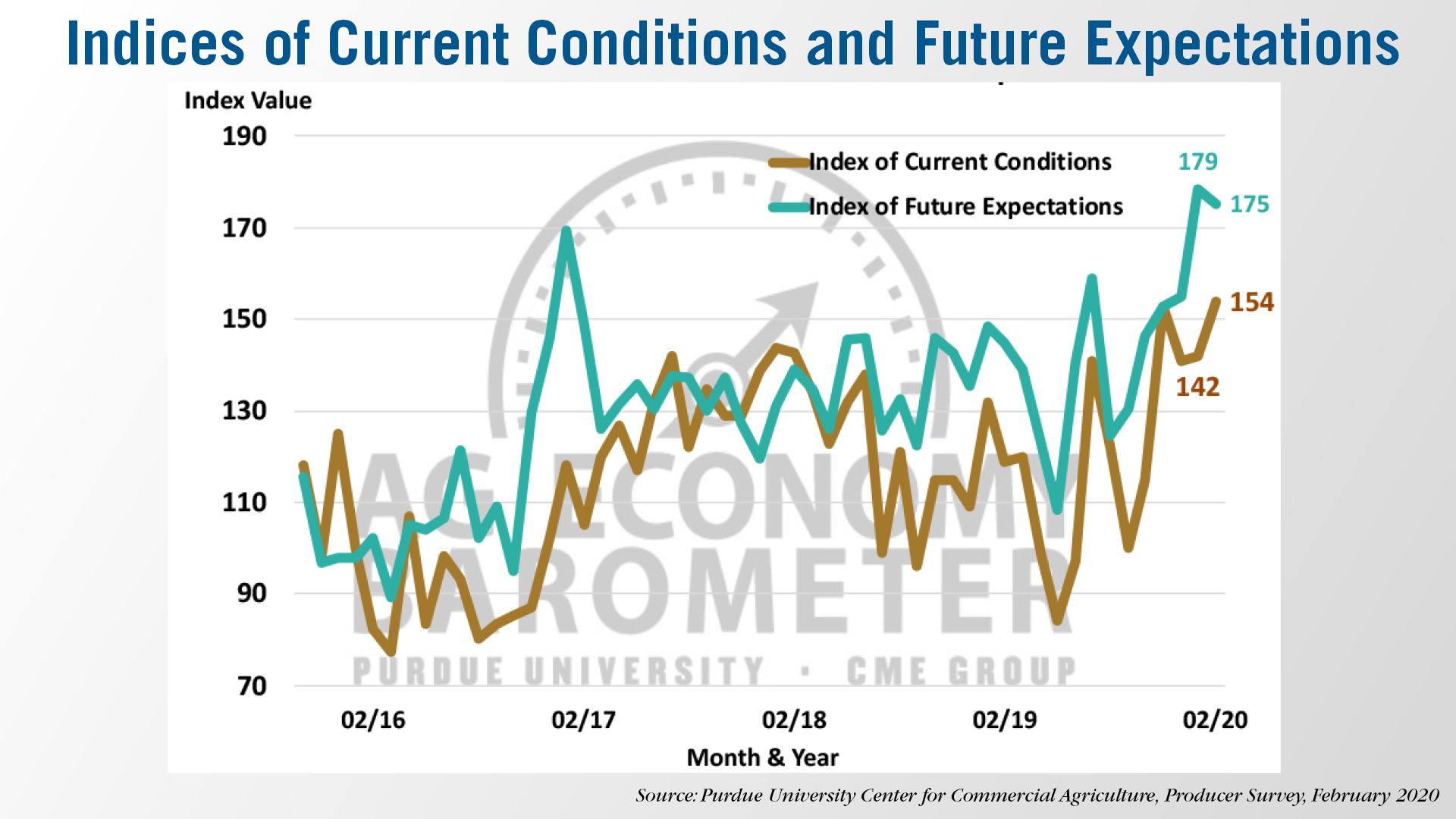 There was a modest improvement in the Farm Capital Investment Index this month. The index rose from 68 in January to 72 in February. Producers have been relatively positive about making large investments in their operation, including machinery and equipment purchases, going back to last fall. The index has ranged from 68 to 72 since November. 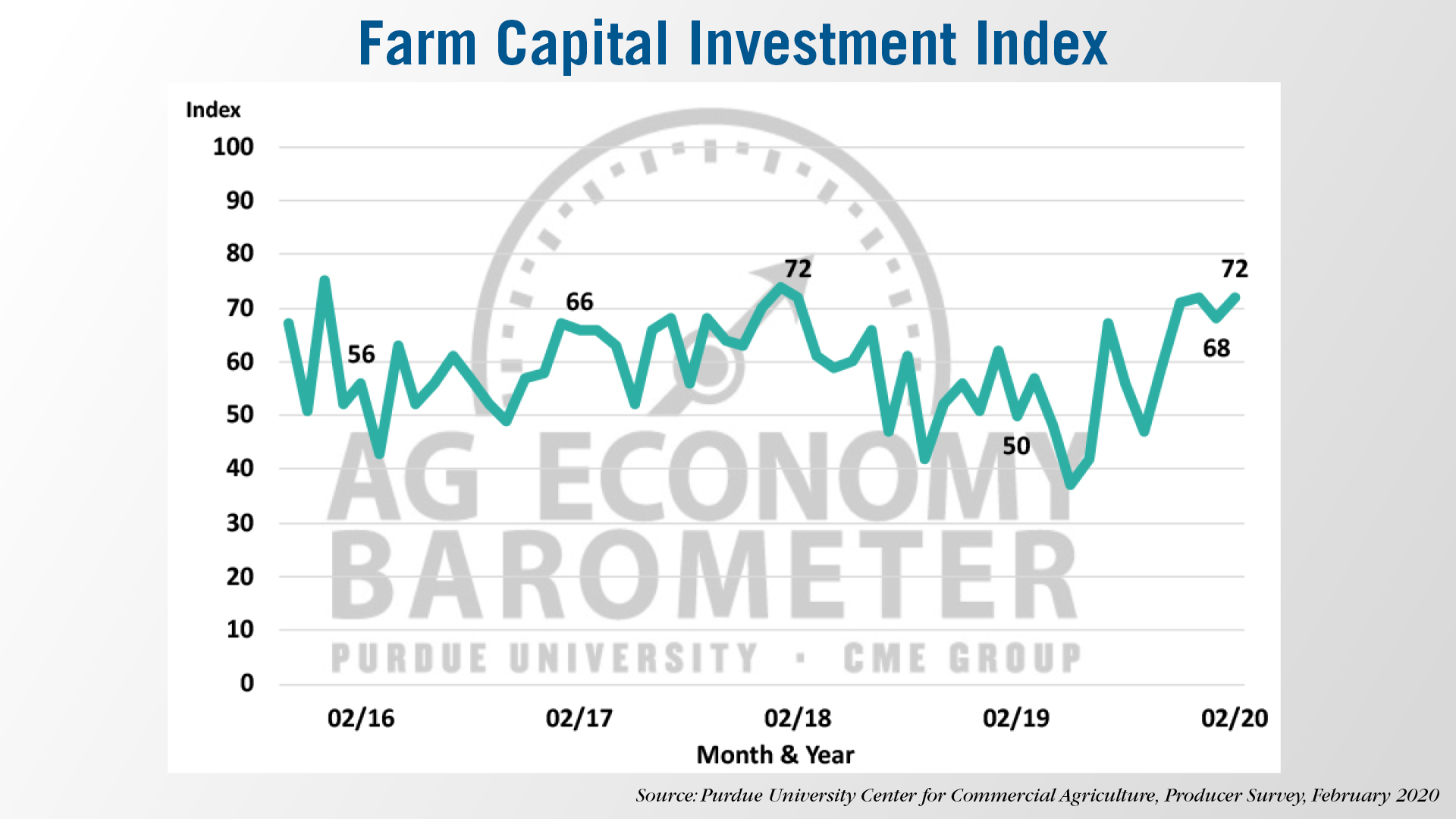 The Investment index readings over the last 4 months have been noticeably stronger than in late summer and early fall of last year, when the index ranged from 47 to 59, the report’s authors say.

Diagnosing technology problems on ag equipment can be as much an art as it is a science. Compatibility and simplicity of systems can pose challenges, even for the most tech-savvy farmers.

But for those willing and capable of troubleshooting precision problems, complemented by reliable dealer support, the ability to fix a technical issue can be a time and money-saving opportunity.

At last week’s Commodity Classic in San Antonio, I visited with Dekalb, Ill., area farmer Brian Voss, who shared his perspective on the Assn. of Equipment Manufacturers’ efforts to provide “right to repair” informational resources to dealerships and equipment manufacturers.

These toolkits include access to information on electronic field diagnostic service tools and training on how to utilize them. For Voss, his equipment fleet includes machinery from nearly every major manufacturer and he relies on at least 4 area dealerships for service.

Telematic support has become a growing part of maintaining uptime in the field and he talked about the importance of a collaborative relationship with his dealerships’ service teams, especially this time of year.

“Obviously with anything in farming, it's all about the timeliness. No matter how prepared you are, you're never fully prepared. And so, you can do all the maintenance in the world ahead of time, but something's going to pop up. To be able to have that tool to hopefully quickly diagnose something and have that available. Because the funny thing is, usually when I'm planting, there's a whole other bunch of people that are planting at the same time.

And there's only so many techs to go around that are dealing with ever-complex issues that take more time to diagnose. It's not just mechanical, it's not you follow the chain or whatever it is, right? It's more technical, different. People got to remember that in their head. And expectations need to be that way, too. That's why I think having this extra option... For us it was, we had downtime in our sprayer and they were actually able to use telematics on-board for that to help do some screen sharing. So I was able to clear out that code and then we it got up and running.”

Global Tractor Sales on the Rise

Of the five countries reporting the highest unit sales of farm tractors, four showed growth in 2019 and one saw sales decline, according to figures compiled by Ag Equipment Intelligence editors and contributors. 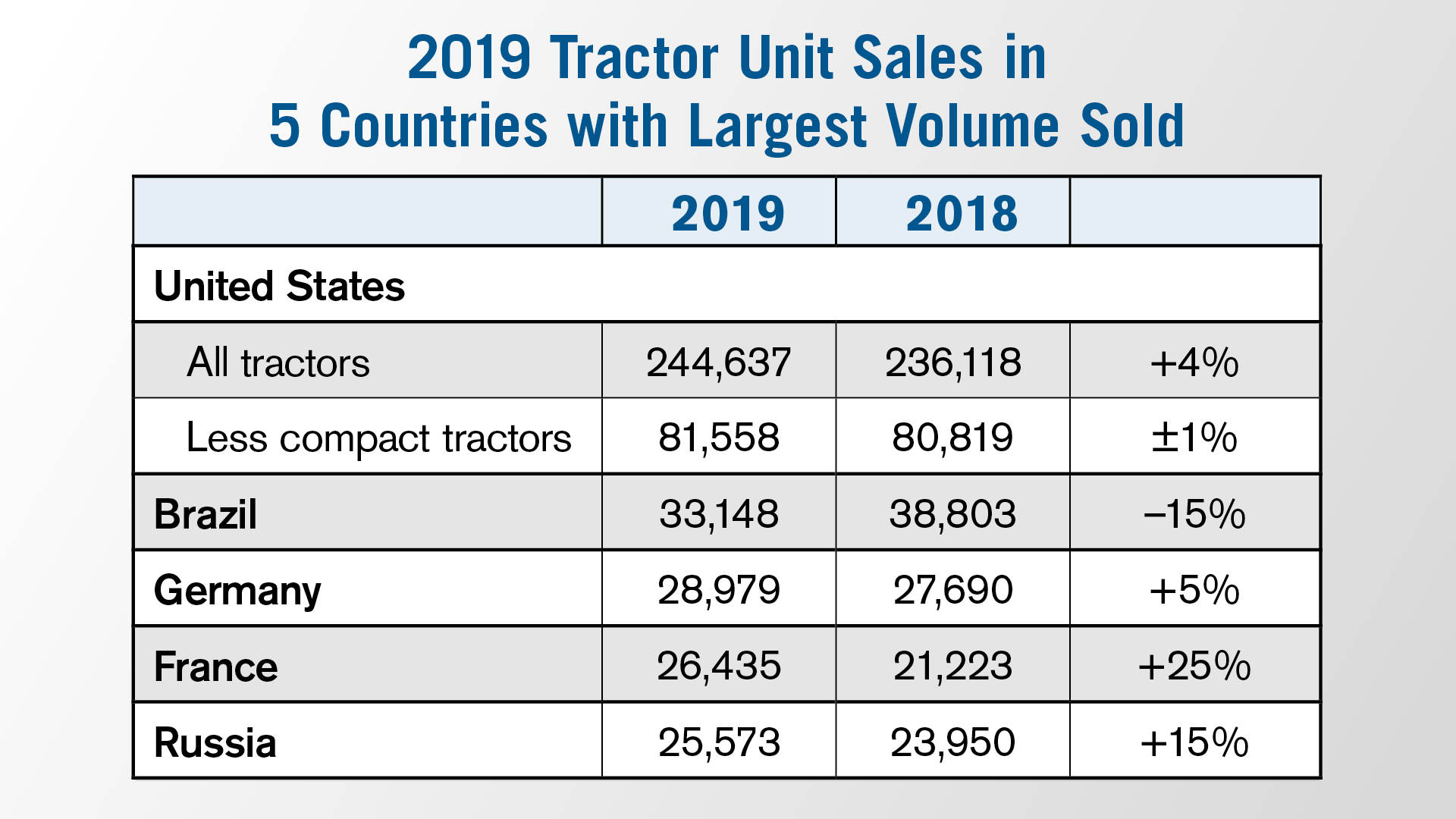 The U.S., Germany, France and Russia saw total sales of tractors increase from up 4% in the U.S. to up 25% in France compared to the previous year. In Brazil, which is second on the list for volume of tractors sold in 2019, sales fell by 15%.

These sales number include all horsepower ranges of tractors sold in each country.

Total tractor sales in the U.S., as reported by the Assn. of Equipment Manufacturers, is skewed by the sheer volume of compact tractors sold annually. In 2019, tractors of less than 40 horsepower accounted for two-thirds, or about 67%, of total tractor sales. Not including tractors under 40 horsepower would leave the U.S. sales at about 81,600 units sold in 2019 vs. 80,819 in 2018, or about flat year-over-year.

On Feb. 27, Alamo Group reported record net sales in the fourth quarter and full year 2019. For the fourth quarter, sales rose by 17%, which was attributed mostly to rising sales in its Industrial Division, which were up 29% to $222 million. At the same time, its Agricultural Division sales fell by 7.5% to $78 million. 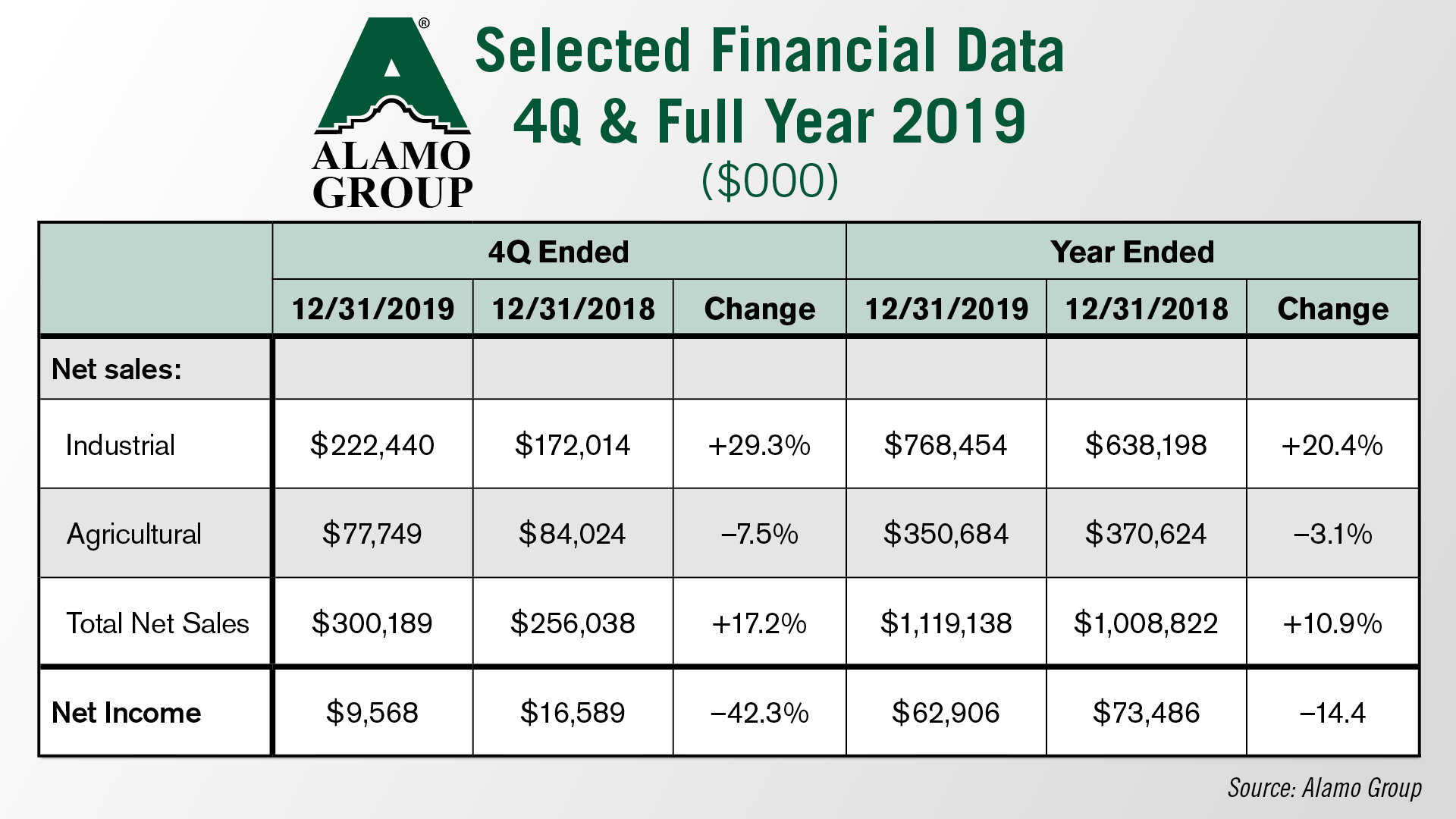 Commenting on the company’s ag sales for the year, Ron Robinson, Alamo Group’s president and CEO, noted positive signals for agriculture for the year ahead. Despite the softness in sales in various regions where the company has a presence, he said, “We started to see some positive signs in some of the areas where we experienced challenges last year. In our Agricultural Division, our bookings in the fourth quarter were 45.9% above the previous year's fourth quarter. While this is certainly not a trend, any improvement in the agricultural market is a welcome development.”

An improvement in revenues from North America made a solid contribution to Krone’s agricultural division finances in its most recent fiscal year. 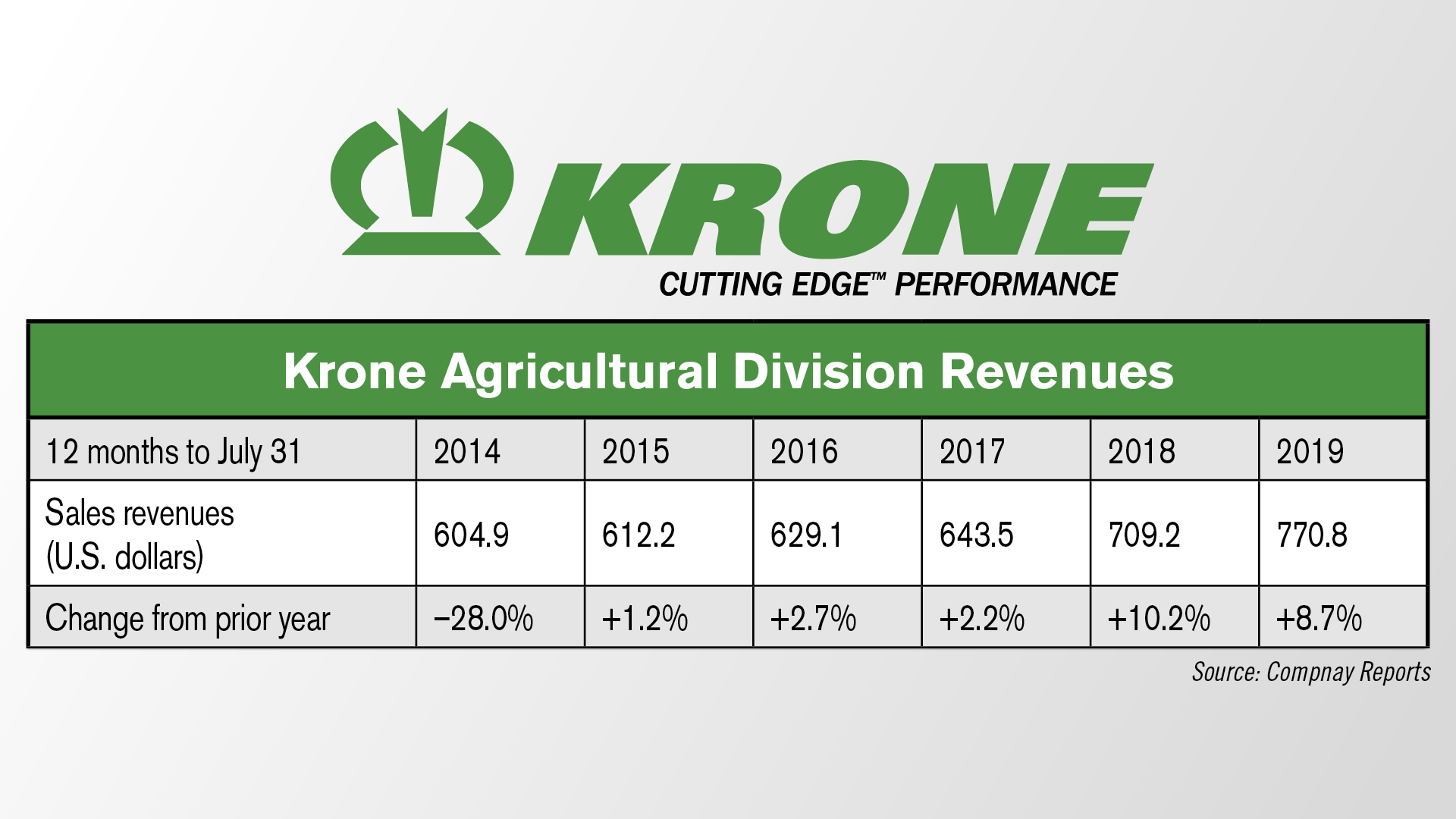 The German group’s hay and silage tools division generated total revenues of $771 million in the 12 month period to the end of July 2019, up 8.7%, or $62 million, during 2017-18, to set another new record for the business and the fifth successive year of growth.

Krone North America as a sales distributor accounted for around 16% of that on a consolidated basis, up about 4% vs. the prior year.

Dietz Lankhorst, president and CEO of Krone North America, credits the performance partly to an overall increase in the hay and forage machinery market, and also to the new products Krone introduced to its pull-type mowers and rotary grass rake portfolios.

Known today for its hay and forage products, Krone got its start in 1906 in Spelle, Germany, when Bernhard Krone worked as a blacksmith. When the second generation took over, the company had already begun building small farm machines and tillage equipment. Bernard Krone II took over in the 1960s and under his leadership the company saw its fastest growth in its history, and also got into the commercial vehicle business. In the late 1970s, Krone developed its first round baler, which lead to the company’s specialization in hay and forage products.