The latest episode of On the Record is now available! Ag Equipment Intelligence editors were on hand for CNH Industrial’s announcement of its 5-year strategic plan, which includes spinning off its “On-Highway” business. Also in this episode, we review Titan Machinery’s 2Q results, provide updates on precision farming and New Holland from the Farm Progress Show, and review one analyst’s observation on corn prices.

Ag Equipment Intelligence editors were on hand in New York City this week when CNH Industrial announced a new 5-year plan, which includes the separation of its on-highway and off-highway segments.

Leading up to the event, there had been much speculation over what would be announced. We reached out to dealers for their reaction. Leo Johnson, dealer-principal of Johnson Tractor, a 4-store Case IH dealership based in Janesville, Wis., says he was hoping for a more significant, industry changing announcement. He says, in CNH Industrial’s world, this is a big deal, but for dealers they see a few top management people from their main supplier shuffling around with slightly different job descriptions. He says it all comes down to product innovation at a cost that dealer customers can see a return on. If that’s what happens from the restructuring, Johnson says he’s all for it.

But the spin-off of the on-highway business was only one part of the company’s bigger 5 year plan. Hubertus Mühlhauser, CEO of CNH Industrial, said the company’s strategic plan is aimed at growing net sales by 5% CAGR. Included among the various elements of the plan are consolidating the dealer network by 10% and rationalizing the global operational footprint by nearly 13 million square feet over the next 5 years. Muhlhauser said that will allow CNH Industrial to increase its utilization from 66% today to 85% in 2024, which will further improve margins and capital returns.

The company plans to invest some $5.6 billion into its agricultural segment.

“In agriculture, our strategic thrust and ambition is to become the leader in sustainable agriculture solutions. The key priorities that will support this goal are our doubling down on precision farming solutions, the better positioning of our differentiated brands and the provision of superior product performance and quality, all of which will lead to a 5% net sales CAGR, an increase in net adjusted EBIT margin of 500 bps to 14%, and a return on assets improvement of 1300 bps to 33%. This morning we announced the acquisition of AgDNA, another steppingstone in our digital farming strategy, which is part of our overall investment of $5.6 billion into the ag segment.”

This week’s Dealers on the Move include Sunshine Quality Equipment, Binkley & Hurst and GreenMark Equipment.

Case IH dealership Binkley & Hurst is consolidating its Dayton and Harrisonburg, Va., locations. A new 20,000 square foot facility in Harrisonburg is expected to open in early 2020.

The last several years have seen rapid changes in competition and collaboration within the precision farming industry. Major manufacturers have been active in acquiring boutique precision companies to complement equipment offerings.

Just this week, CNH announced its acquisition of precision data company, AgDNA, to enhance its fleet management and telematics offerings.

As specialty companies are being absorbed into larger machinery manufacturers, there is increased need for versatility, adaptability and innovation with sales and service — common attributes of independent precision dealers.

At the 2019 Farm Progress Show, I caught up with several precision farming manufacturers to find out how their relationship and  expectation of independent dealers have evolved in recent years in relation to OEMs dealers in the precision space.

Gregg Sauder, who launched Precision Planting and 360 Yield Center, spoke on the unique value of today’s independent precision dealer and what he looks for in a business relationship.

“You'll see a lot of them [independent dealers] will carry maybe one or two different lines, and there's always this close synergy between the product. A lot of them will have some type of a gen three or gen two monitor, and they understand data's where it's at. And so, they help the grower get as much data requisition, and help them also understand what they are looking at when they bring that data back out. They're analyzing yield maps, and Lidar maps and all the different things that we look at, and asking ‘How do we take that grower, that farmer to the next step?’

So the professional independent that has the right amount of relationship with a bank — he's got a large line of credit so he can stock, he can invest in the technology — those are the ones that we see taking really large steps ahead. Their sales growth each year is well over 20%. So each year, we see them growing 20-30% in their sales, and then the success that follows that is really, really fun to watch.”

Sauder adds that independent dealers are often well-positioned to be business integrators, working with customers across multiple platforms and equipment brands.

Titan Machinery Revenue Up 6% in 2Q 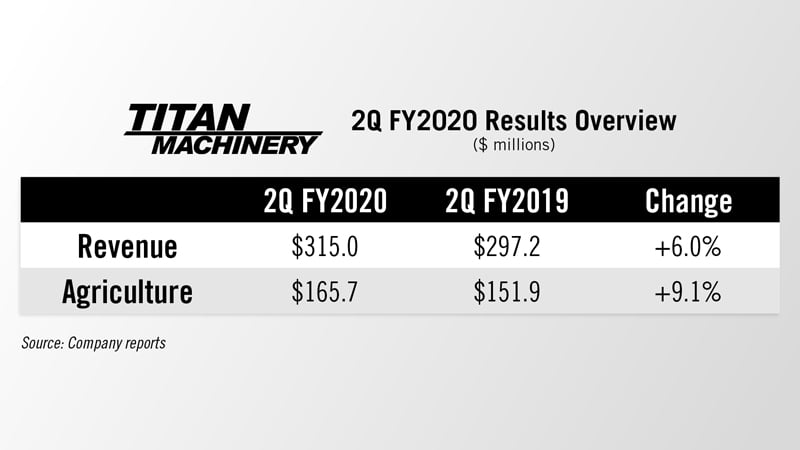 During the Farm Progress Show, Ag Equipment Intelligence editors had the chance to sit down with Brett Davis, New Holland’s new vice president of North American for a one-on-one interview.

Davis says he doesn’t get hung up on short-term political issues, such as the current trade battles impacting both the U.S. and Canada, because we can’t control political issues. The same goes for weather. Instead, Davis says it’s his job to make sure the business is positioned for long-term success.

When it comes to New Holland’s dealer network, Davis says strengthening the network is a priority and as products get more sophisticated, stronger dealers are needed. He says that does include consolidation, but it doesn’t mean that a one or two location dealership can’t be successful and thrive.

“I am not going to sit here and tell you that you can't have one store and be highly successful. Man, I’ve got stores in different places that do $50, $60, $70 million out of one location. So, I don't think there's a one size that fits all. And I think you need to just find good dealers that provide excellent service, that we can relate to their business model. I do believe there's critical mass needed in a particular location in order to make it successful … And the most important thing for me is to make sure the dealer is adequately structured to provide the support necessary for the customer. That's the bottom line. If they can answer that question in the positive, I'm pretty good. And that's what I'm evaluating. I'm looking around making sure that they can service the brand, service the customers in the right way. And it doesn't mean that they have to be publicly traded. No, it doesn't mean they need to have a hundred locations. No, they could have two locations.”

Davis adds the days of having dealerships located 10 or 20 miles apart from each other is a thing of the past.

At least one industry observer sees several factors that could result in higher corn prices by year end which could produce a positive impact on farm equipment demand.

One of the factors cited in an Aug. 29 note, Mig Dobre, machinery analyst for RW Baird, says that percentage of corn rated good-to-excellent is well below prior years. “When examining the top 10 producing states, accounting for 83% of total corn production, only one state, North Dakota, is seeing current corn conditions ahead of the 5 year average, with the nationwide number 11% below 2018 and the 5 year average.” 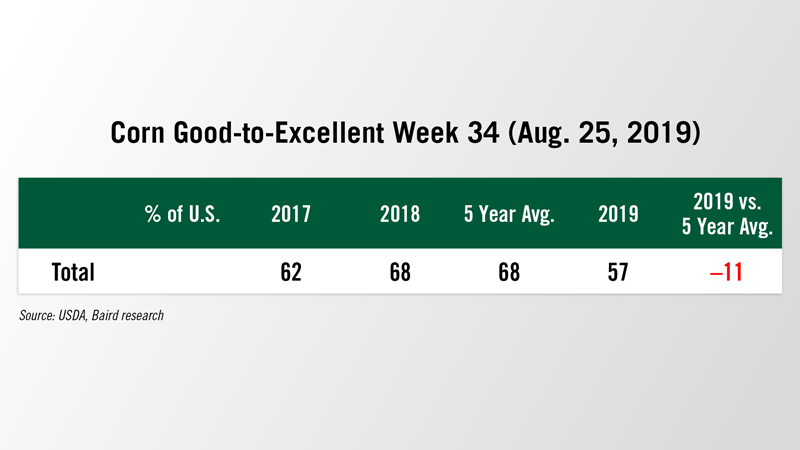 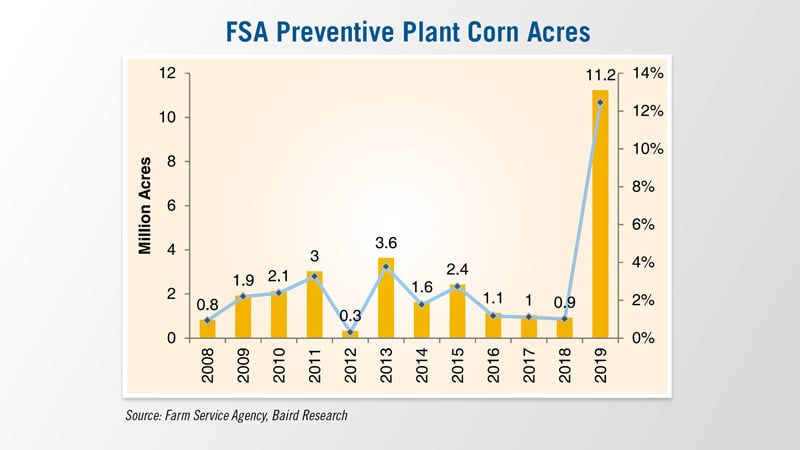 Dobre also sees the level of prevented planting acres as a factor that could play into higher corn prices for the 2019 crop. The Farm Service Agency reports record high prevented plant corn acreage of 11.2 million acres, a 211% increase over the prior record in 2013 which, he says, should pressure the USDA harvested acreage estimate of 82 million vs. planted acres of 90 million.

And now from the Implement & Tractor Archive 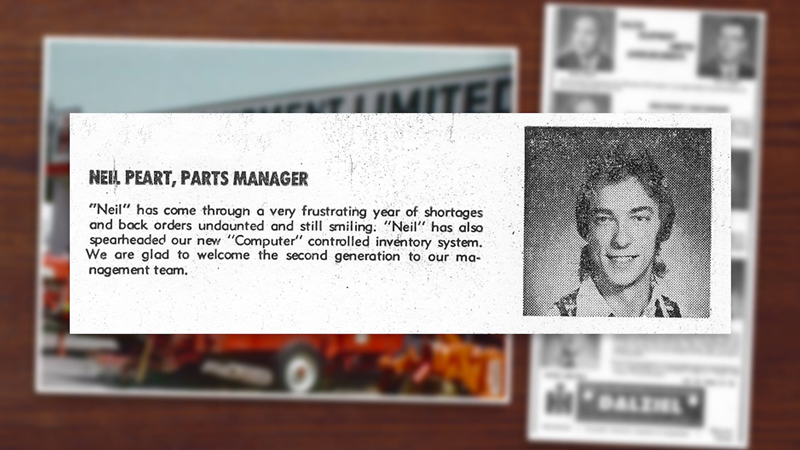 Just two weeks before Neil Peart made his public debut as the drummer for Canadian rock band Rush in 1974, he was working his father at a farm equipment dealership, Dalziel Equipment. He was the parts manager for International Harvester dealership in St. Catherine’s, Ont., during a time when there were equipment shortages and back orders on parts.

As always, we welcome your feedback. You can send comments and story suggestions to kscchmidt@lessitermedia.com. Until next time, thanks for joining us.