The latest episode of On the Record is now available! CNH Industrial made a lot of news recently, including its latest earnings report, acquisitions of K-Line and ATI, and joining up with Deere, Claas and 365FarmNet. In the Technology Corner, Jack Zemlicka discusses Raven’s recent acquisition of two autonomy companies. Also in this episode, we review Rocky Mountain Dealership’s latest earnings, as well the earnings for Alamo and AGCO. Associate Research Editor Ben Thorpe shares an update on USDA’s interim hemp guidelines.

CNH Industrial reported third quarter consolidated revenues of $6.4 billion, a year-over-year drop of 5%. Net sales of its agricultural segment dropped 7% vs. the third quarter of 2018. 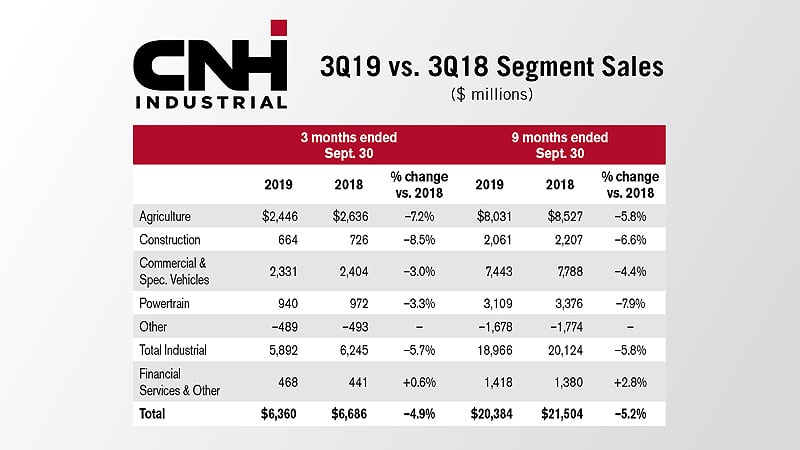 The company said industry volume deceleration coupled with an unfavorable product mix drove sales down, primarily in North America and the Rest of World regions. This was partially offset by a sustained price realization performance in excess of 2 percentage points.

North American sales of farm equipment fell 7% in the third quarter and were also down in Europe by 4%. CNH Industrial’s Rest of World sales fell by 20%. The only region that saw increased sales was in South America where ag equipment sales rose by 1%.

In its 2019 outlook CNH Industrial’s management said in the third quarter, industry conditions in the main agricultural markets have further deteriorated due to market uncertainties and negative farmer’ sentiment, particularly affected by poor yield conditions in various regions.

The company also noted recent developments in U.S.-China trade negotiations and the related potential implications for commodity prices could have a positive impact on sentiment and, accordingly, equipment purchases in the U.S. and Canada toward the end of the year.

Since announcing its 5 year strategic plan aimed at growing its net sales by a 5% compounded annual growth rate in early September, CNH Industrial has made three major acquisitions. These include:

CNH Industrial also announced that it is joining with John Deere, Claas and 365FarmNet to form DataConnect. The new interface will be designed to securely exchange and view machine data between various machine brand platforms.

The group says the DataConnect initiative is the first direct, manufacturer-independent system to enable the seamless, automatic and real-time exchange of machine data regardless of equipment brand. They expect DataConnect to be rolled out by all four companies in late 2020.

The group says it welcomes other equipment manufacturers and software providers to help develop the DataConnect interface.

This week’s Dealer on the Move is AgriVision and High Plains Equipment.

Immediately following the release of its 5-year plan to significantly increase its investment in autonomous ag technologies, Raven Industries acted on that strategic plan with the acquisition of 2 independent autonomous companies.

On Oct. 30, the company announced the acquisition of a majority interest in Dot Technologies, a Canadian firm that has developed the Dot Power Platform and Dot Ready Implements.

How the acquisitions and further commercialization of autonomous systems will evolve Raven’s dealer network remains to be seen.

But, 42% responding dealers to the 2019 Precision Farming Dealer Benchmark study cited autonomous equipment as being an important part of growing revenue during the next 5 years.

A further breakdown of the data shows that 57% of independent precision dealers anticipate autonomous equipment being an important part of their 5-year plan, while 38% of farm equipment dealers have the same outlook.

Rob Saik, CEO of Dot Technology, notes that the flexibility of its platform could create some new opportunities with dealers and manufacturers.

“For shortline implement manufacturers, Dot is an open, U-shaped platform. So we’re open to talk to shortliners and OEMs about how to integrate their equipment into the Dot platform. So there's lots of reasons why people need to take a look at  the Dot (system), and we’re just happy to be able to supply a path to autonomy for the agricultural sector.”

With Raven making a statement in the autonomous ag equipment market, it will be worth watching to see if and when other companies respond, including the major manufacturers.

After reporting a 36% drop in total sales during the second quarter of this year, things haven’t gotten much better for Rocky Mountain Dealerships, Canada’s largest farm equipment dealer. 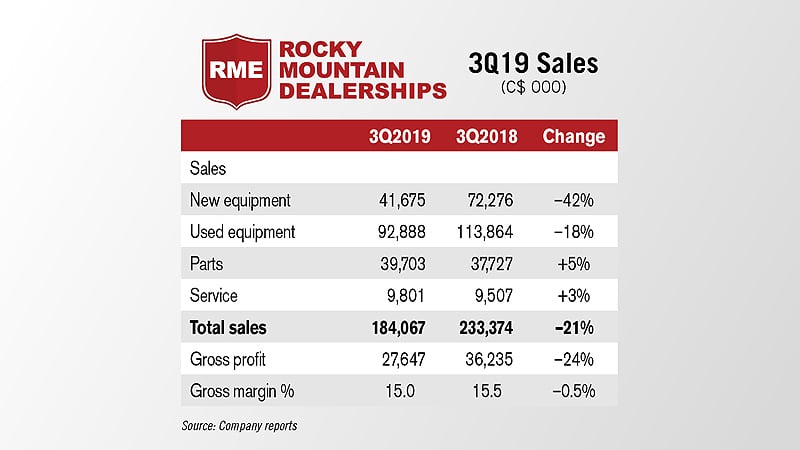 On Oct. 30, the Case IH and New Holland dealership group posted a 21% decrease in total sales during the third quarter of 2019 ending Sept. 30. New equipment sales fell by 42% and used equipment sales dropped 18% during the period. Parts sales improved by 5% and service was up 3%.

The ongoing sales slump in ag equipment is impacting Canadian sales overall. According to the latest figures from the Assn. of Equipment Manufacturers, total Canadian farm tractor sales are down nearly 4.5% year-to-date, while sales of combines are off nearly 28% for the year.

While its consolidated sales were up 5.5%, Alamo Group reported sales from its Ag Division fell nearly 3% in the third quarter and were down 1.2% through the first 9 months of 2019. 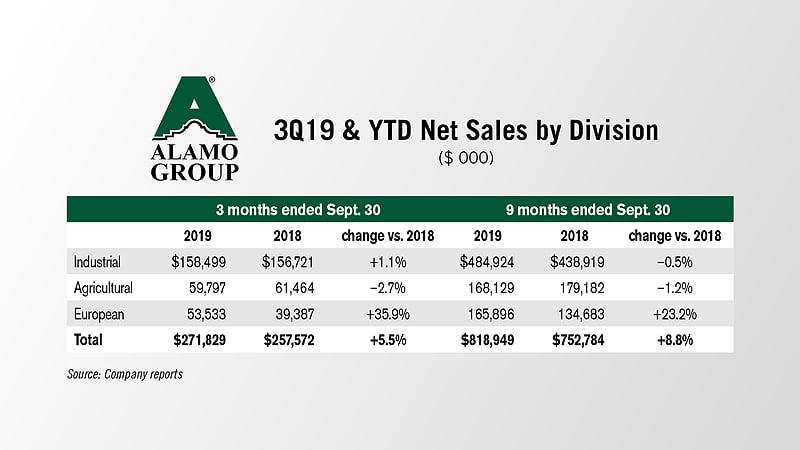 The company said ongoing weak agricultural market conditions continue to dampen its sales in this sector made worse by an unfavorable product mix which saw the market for its higher margin flex wing mowers soften more than its other agricultural products.

Alamo also completed the acquisition of Morbark, a manufacturer of equipment and aftermarket parts for forestry, tree maintenance, biomass, land management and recycling markets. The purchase of Morbark was the largest acquisition in Alamo’s history. 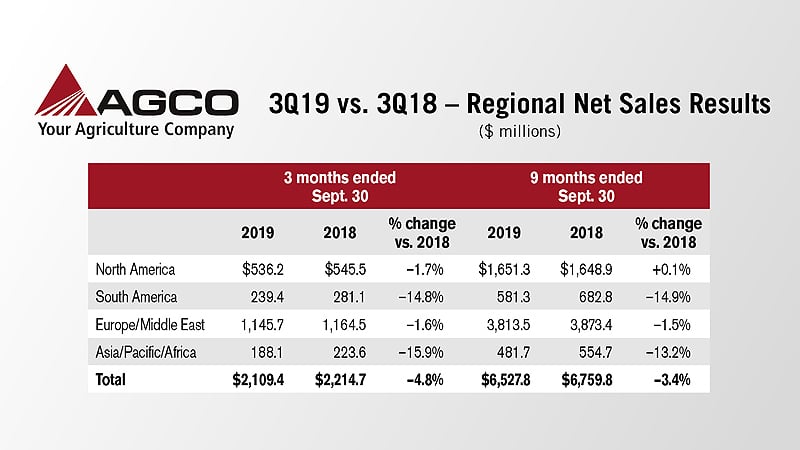 Regionally, AGCO reports that North American sales were down less than 2%, while European and Middle East sales fell about 1.6%. The company saw the biggest declines in South America where sales dropped nearly 15% and, in the Asia, Pacific and African region, where sales of farm machinery sales fell nearly 16%.

AGCO’s North American net sales increased a little less than 1% in the first 9 months of 2019 compared to the same period of 2018. The company said, “In North America, industry retail sales were flat in the first 9 months of 2019 compared to last year with higher sales of smaller equipment offset by lower sales of high horsepower tractors and combines. The prospect of lower yields and the uncertainty regarding the outcome of trade negotiations are both contributing to weak demand in the large farm sector,” the company said.

After much anticipation, USDA announced last week its interim ruling on U.S. hemp production, giving growers, equipment dealers and manufacturers a clearer picture of how they can operate in this new commodity market.

As part of this announcement, USDA will begin issuing its own hemp production licenses, where before only state licenses were available. These federal licenses will give growers living in states without pending or finalized hemp programs the ability to produce hemp legally, widening the demographic of potential hemp producers.

Crop insurance, disaster assistance, loans and conservation programs were announced as well, set to begin in the 2020 growing season. USDA also announced states would no longer be able to ban the interstate travel of legally grown hemp, regardless of that state’s hemp restrictions. This will increase the amount of infrastructure available to hemp growers, who can now confidently look for buyers and processors across state lines. 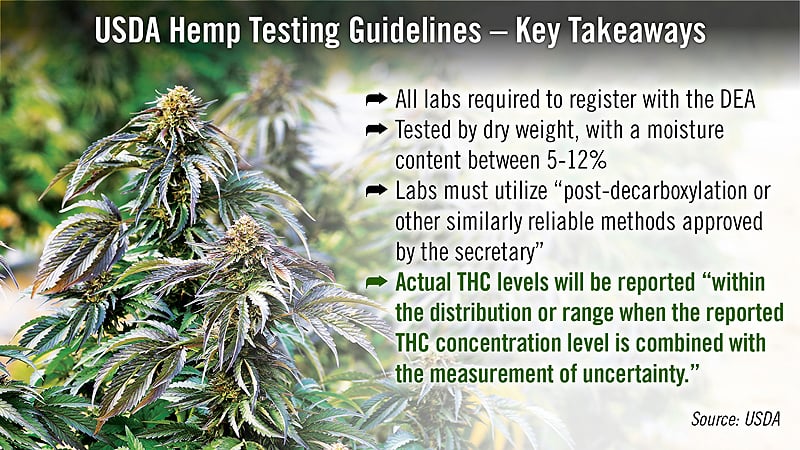 Perhaps most importantly, USDA released guidelines for testing the THC content of hemp. One key point is that labs are allowed to use a “measurement of uncertainty” in their testing. This means hemp may be allowed to exceed the legally required 0.3% THC levels depending on the mathematically calculated confidence labs have in their test’s accuracy.

This leniency could help lower the rate at which hemp farmers lose their crops for testing too high in THC, a major hurdle for some farmers trying to enter the market.

Bryan Parr, a Wisconsin-based agronomist with Legacy Hemp, spoke with Ag Equipment Intelligence editors on the significance of the testing guidelines and what they’ll mean for the industry.

“One of the things that they're requiring is a standard method for testing THC. And it appears that they are going to require decarboxylated THC testing for THCA and basically total THC. That is how Wisconsin is currently testing under our pilot program, is total THC. But there are a lot of other states who are just [testing for] delta-9 in its original state. And I think that will impact a lot of growers who have not had to experience total THC as a regulatory basis.”

All in all, these announcements forecast a healthier future for the hemp industry and lay a solid foundation for growth, not just for growers but also for the dealers and manufacturers that that are looking to supply and equip this budding market. 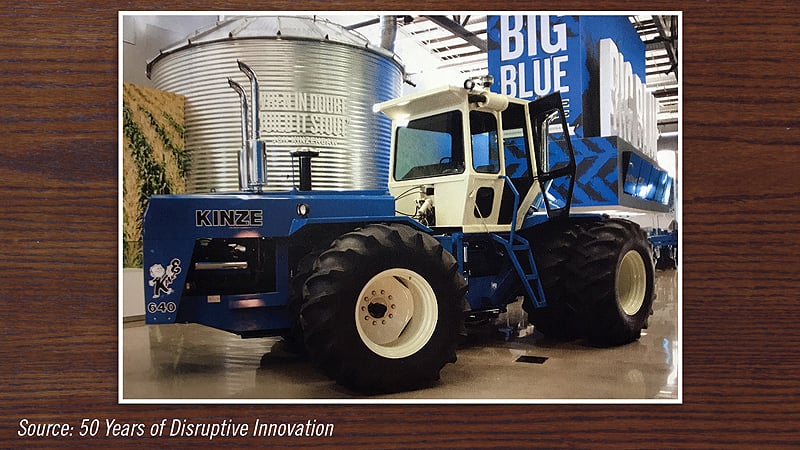 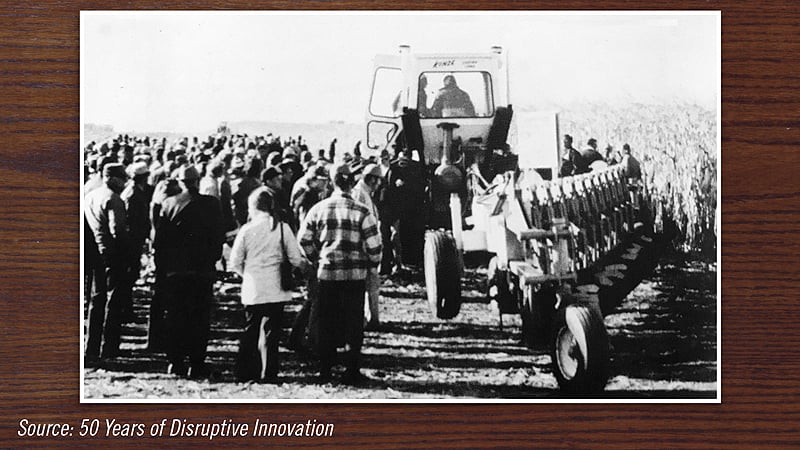 Today, Kinze Manufacturing is best known for its planting innovations, but at the 1974 Farm Progress Show Jon Kinzenbaw debuted a 20 ton concoction that coupled two repowered John Deere tractors — painted blue — into an eight-wheeled, 4WD behemoth nicknamed “Big Blue.” According to Kinzenbaw’s book Fifty Years of Disruptive Innovation, while leading a field demonstration with Kinze’s new 12-bottom plow, he had some fun with the crowd that had gathered, pretending to get the 600 horsepower stuck in the dirt but then put both front and back axles into gear and drove away, leaving the crowd surprised.