The latest episode of On the Record is now available! In this week's episode we discuss Deere & Co.'s 4Q earnings, along with the company's recent announcement about voluntary employee buyouts. In the Technology Corner, Jack Zemlicka talks about one dealership's take on precision specialist training. Also in this episode, the latest earnings reports from Titan Machinery and Kubota, a comparison between European and North American farm equipment distribution and a look at regenerative agriculture trends.

Deere & Co. reported worldwide sales and revenues for the fourth quarter ended Nov. 3 improved 5% to $9.9 billion compared to the same period last year. For the full year, net sales were also up 5% to $39.3 billion. Net sales for equipment operations improved 4% for the quarter and 5% for the full year compared to 2018. 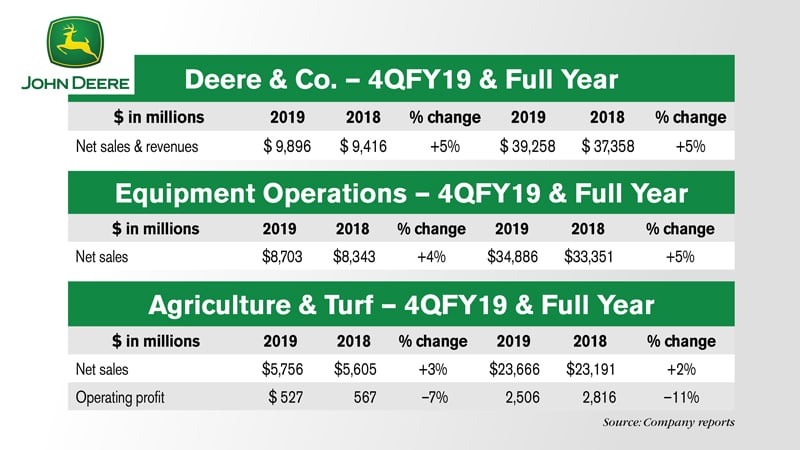 Looking ahead, Deere is forecasting net income for fiscal 2020 to be $2.7- $3.1 billion. “Despite present challenges, the longer term outlook for our businesses remains healthy and points to a promising future for Deere,” explains Deere CEO John May.

May also says the company is “particularly encouraged by the adoption of precision technologies and believe we are well positioned to be a leader in the delivery of smarter, more efficient and sustainable solutions to our customers. At the same time, we are committed to the successful execution of our strategic plan and have initiated a series of measures to create a leaner organizational structure that can operate with more speed and agility. We’re confident these steps will lead to improved efficiencies and help the company focus its resources and investments on areas that have the greatest impact on performance.”

Ahead of its earning call with investors on Nov. 27, Deere rolled out a voluntary employee buyout program. Ken Golden, Deere’s director of global public relations, said the voluntary separation program is being offered to certain segments of Deere & Co.’s U.S. active salaried employees. However, employees working in precision technology and other new product programs are not eligible.

Employees who received the offer can accept it until the end of the company's first quarter in fiscal year 2020, which began Nov. 1, 2019. The buyout program is an extension of an earlier offering that happened for certain departments during the fourth quarter of fiscal 2019.

This week’s Dealer on the Move is RDO Equipment and Pattison Agriculture.

Assessing the performance and production of a precision farming team can take into account several factors. Customer service and communication skills are less quantifiable than sales volume and service hours billed.

Adding to the evaluation are expectations based on experience. Dealers acknowledge that new precision specialists are often a 3-year investment before they consistently become profitable employees.

Turnover is expensive, says Nick Rust, precision ag coordinator with H&R Agri-Power in Hopkinsville, Ky. With nearly a decade of precision specialist experience, his approach to retention is a mix of mentoring and managing.

Overseeing an 11-person precision team, including 5 with less than 1 year of experience, Rust says putting ongoing training is essential to advancing specialists to the point of being profitable for the dealership.

“I want retention. I want to keep people. Because if I’m not constantly training, what we can focus on is what matters and ultimately, it’s making more money. We’re in the sales business. Turnover costs us a lot of money. Granted, a 3- or 4-year-old, 3 or 4 veteran specialists is going to cost you twice as much as what the college kid does but they’re going to be producing.”

Rust adds that while the dealership takes into account intangibles, gross contribution is the primary metric on which precision specialists are ultimately measured. 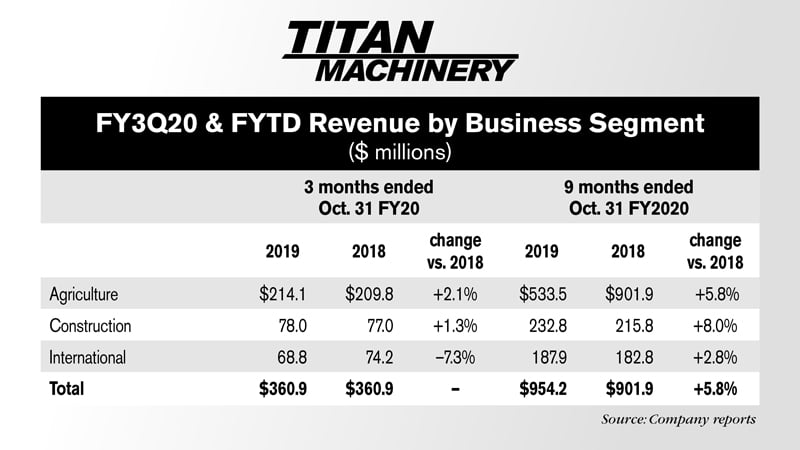 How Does Farm Equipment Distribution Differ in Europe?

During the once-every-2 years Agritechnica Show in Hanover, Germany, last month, Ag Equipment Intelligence arranged a meeting with the president of the European Equipment Dealer Assn., CLIMMAR, Erik Hogervorst, to understand trends in European farm equipment distribution, and how that market functions differently from North America.

After reporting a 7% increase in consolidated revenue from tractor, farm equipment and engine sales in the first half of the year, Kubota’s earnings for the first 9 months of 2019 followed much of the same upward momentum. 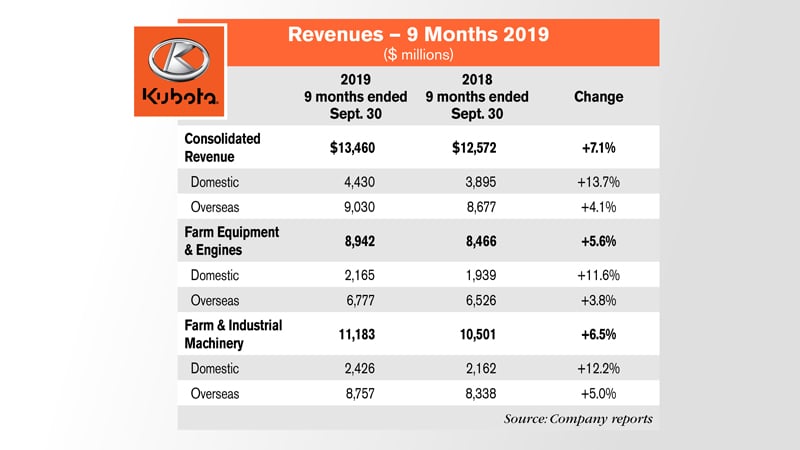 For the first 9 months of 2019 ended Sept. 30, Kubota reported revenues increased by $888.2 million, or 7.1%, to $13.5 billion compared to the same period las year. Domestic revenue increased 13.7% vs. the same period in 2018 to $4.4 billion. Kubota attributed the increase largely to a significant rise in revenue in the Farm & Industrial Machinery segment.

Overseas revenue increased by $353.8 million, or 4.1%, to $ 9 billion vs. the same period last year. This was due to revenue in the Farm & Industrial Machinery segment increasing as a result of strong sales of tractors and construction machinery.

Revenue in the Farm & Industrial Machinery segment, which is comprised of farm equipment, agricultural‐related products, engines and construction machinery, increased by 6.5% from the same period in 2018 to $11.2 billion and accounted for 83.1% of consolidated revenue.

Overseas revenue in this segment increased by 5% from the same period in the prior year to $8.8 billion. In North America, sales of tractors and construction machinery increased significantly as the solid market continues.

Who Will Pay for Sustainable Agriculture?

Sustainable agriculture, sometimes called regenerative agriculture, is the latest buzzword in the ag world. It promotes conservation practices such as reducing tillage and utilizing cover crops, and the movement promotes benefits to both farmers and the planet, including increased yields and improved soil health. But this new interest in conservation has some in the industry wondering: who’s going to pay for the adoption and transition to these practices that are potentially costly to many farmers?

Wendiam Sa wadgo, graduate research assistant, and Alejandro Plastina, assistant professor from Iowa State University sought to answer this question in their November presentation during the Federal Reserve Bank of Chicago’s Agriculture Conference. By breaking down their study conducted on Iowa’s sustainable agricultural practices, they revealed what practices were most common across Iowa and how they were being funded. 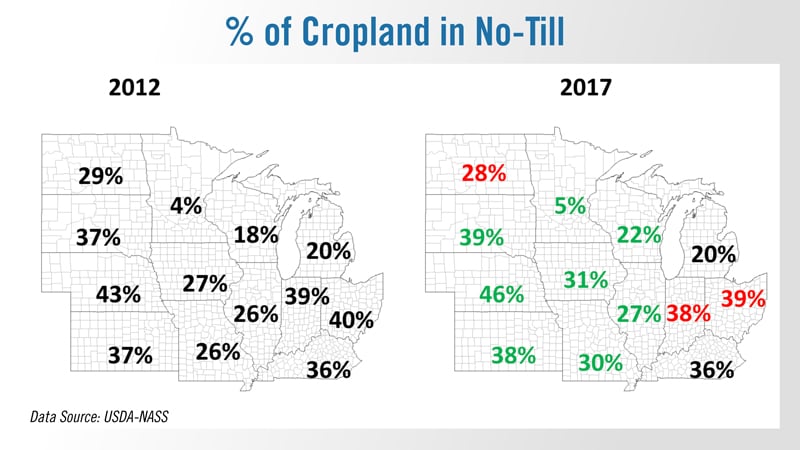 Their research showed that, while the percentage of cropland in the Conservation Reserve Program was down, no-tillage and cover cropping usage had grown considerably between 2012-17, with the percentage of no-till cropland specifically growing by as much as 4% in several states, according to USDA data.

“We’ve seen some industry get involved, so there are companies that have these private cost-share programs where they do fund planting cover crops. Walmart has some, PepsiCo has some, and they work together with a lot of non-profits, with Practical Farmers of Iowa to get this funding in place.”

In addition to roughly one third of Iowa landowners indicating they’d be willing to help fund cover cropping on their land, Sawadgo also mentioned some cities have even taken their own initiatives to promote sustainable agriculture. Specifically, Cedar Rapids has funded conservation practices in several counties farther up the Cedar River, as a way to reduce nitrate runoff from crop production.

In 1957, brothers Cyril and Louis Keller of Rothsay, Minnesota, invented the first skid steer, in response to a turkey producer’s need to clean out his barn, and ultimately disrupted the construction equipment market with their compact loader, according to Iron Solutions. 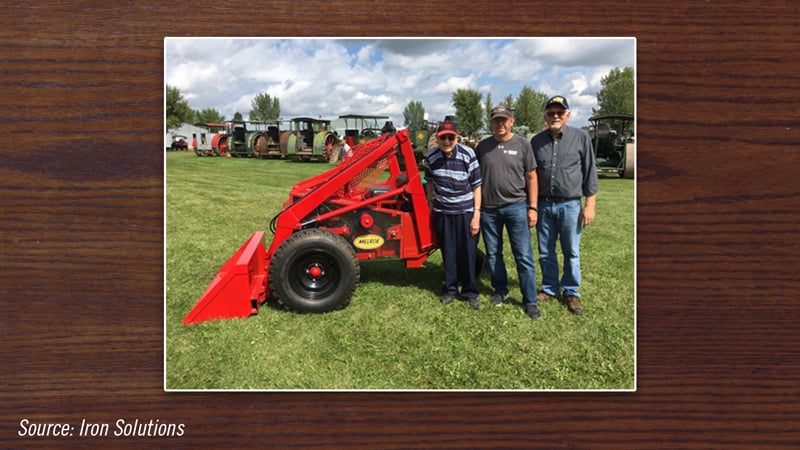 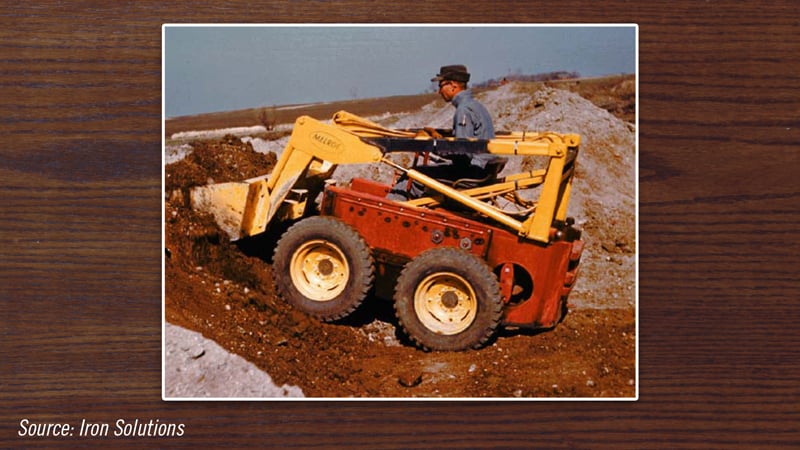 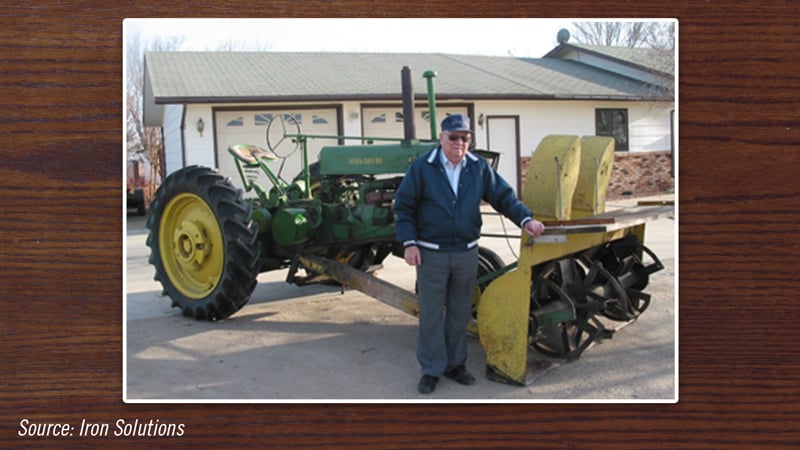 Cyril and Louis owned and operated Keller Manufacturing in Rothsay, a fabricating and repair shop. Local farmers often called on the inventive brothers to repair equipment such as plows, diggers and cultivators. They also manufactured snowblowers, plowshares and hay wagons.

One such customer, Eddie Velo who was a pioneer in the turkey industry, turned to the brothers in 1956 for their help. Velo was going from small flocks to a large production and needed a piece of equipment that could clean up large amounts of manure around posts set every 8 feet apart in his two-story barns. The standard loader tractors at the time were too large, had limited maneuverability and were too heavy to operate on the second floor of his barn. 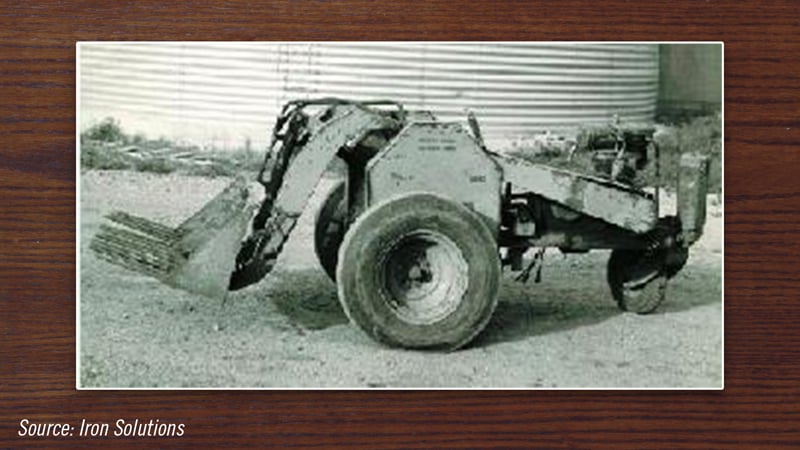 That first prototype was a small, three-wheeled machine with a belt-driven transmission. It consisted of mostly manufactured parts, car wheels, a 6.6 horsepower Kohler engine and a transmission from a Plymouth, and a few scrap parts from unusual sources. For more on the history, you can read the complete story from Iron Solutions here.

As always, we welcome your feedback. You can send comments and story suggestions to kschmidt@lessitermedia.com.