In this week’s episode, we look at how Kubota performed in the second quarter and first half of 2021. The manufacturer reported healthy growth in both revenue and operating profit. In the Technology Corner, our new editor Michaela Paukner reports on Deere’s recent acquisition of Bear Flag Robotics. Also in this episode: farmer sentiment declined slightly in July, according to Purdue’s latest Ag Economy Barometer, and Alamo Group reported a strong second quarter and first half.

Kubota First Half Revenue Up 24.6%

Kubota recently announced its earnings for the second quarter 2021, reporting healthy growth in both revenue and operating profit.

For the second quarter of this year, revenue for Kubota Corporation totaled $5.1 billion, up 27% year-over-year. For the first 6 months of 2021, revenue increased by 25% to $10 billion. 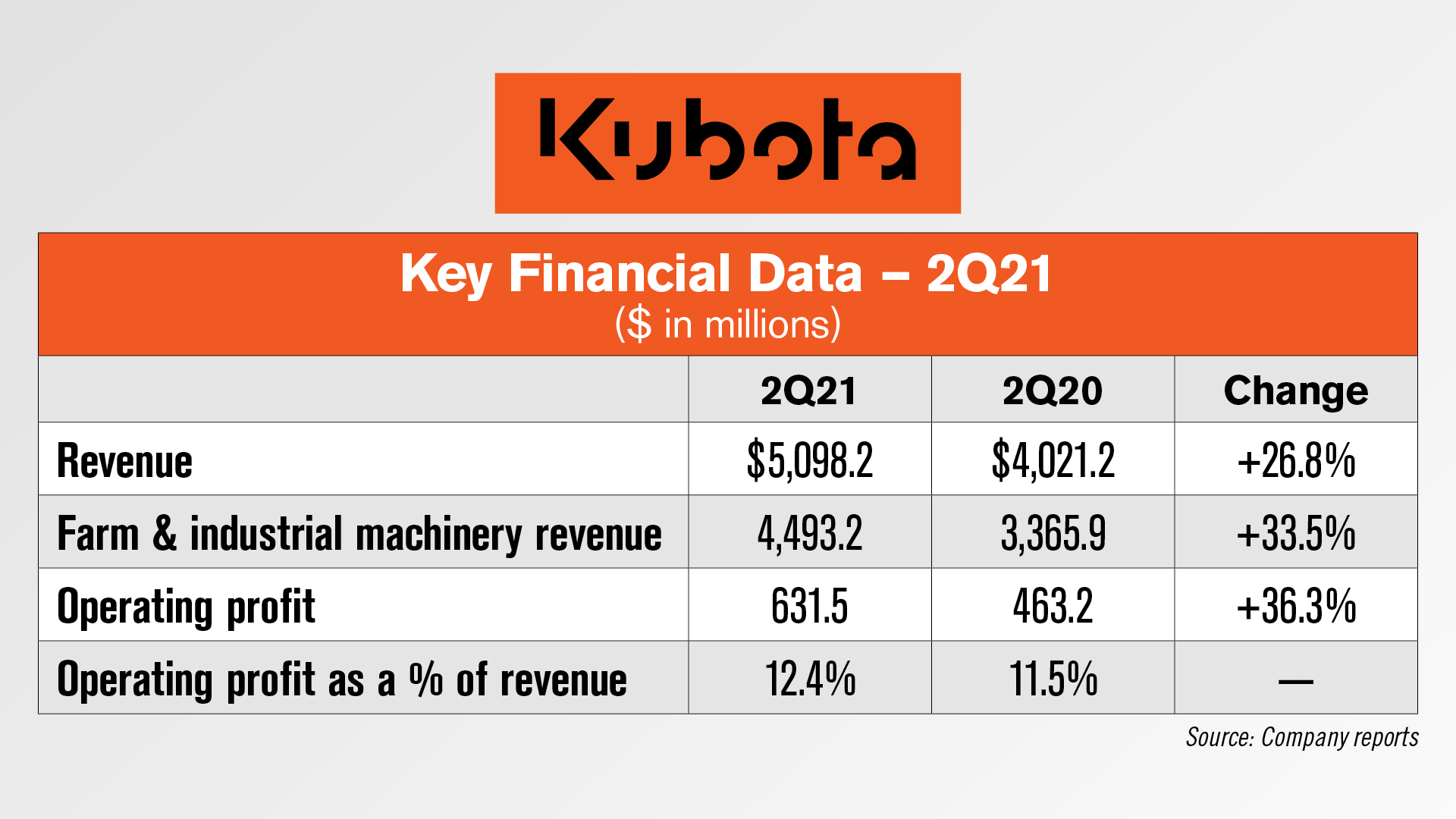 Farm & industrial machinery revenue rose by 34% in the second quarter to $4.5 billion vs. $3.4 billion in the second quarter of 2020. Revenue in this segment for the first half of the year rose 31% to $8.5 billion and accounted for 86% of Kubota’s consolidated revenue. In North America, sales of tractors and construction machinery increased significantly due to strong demand, despite delays in production and shipment caused by port congestion and labor shortages. 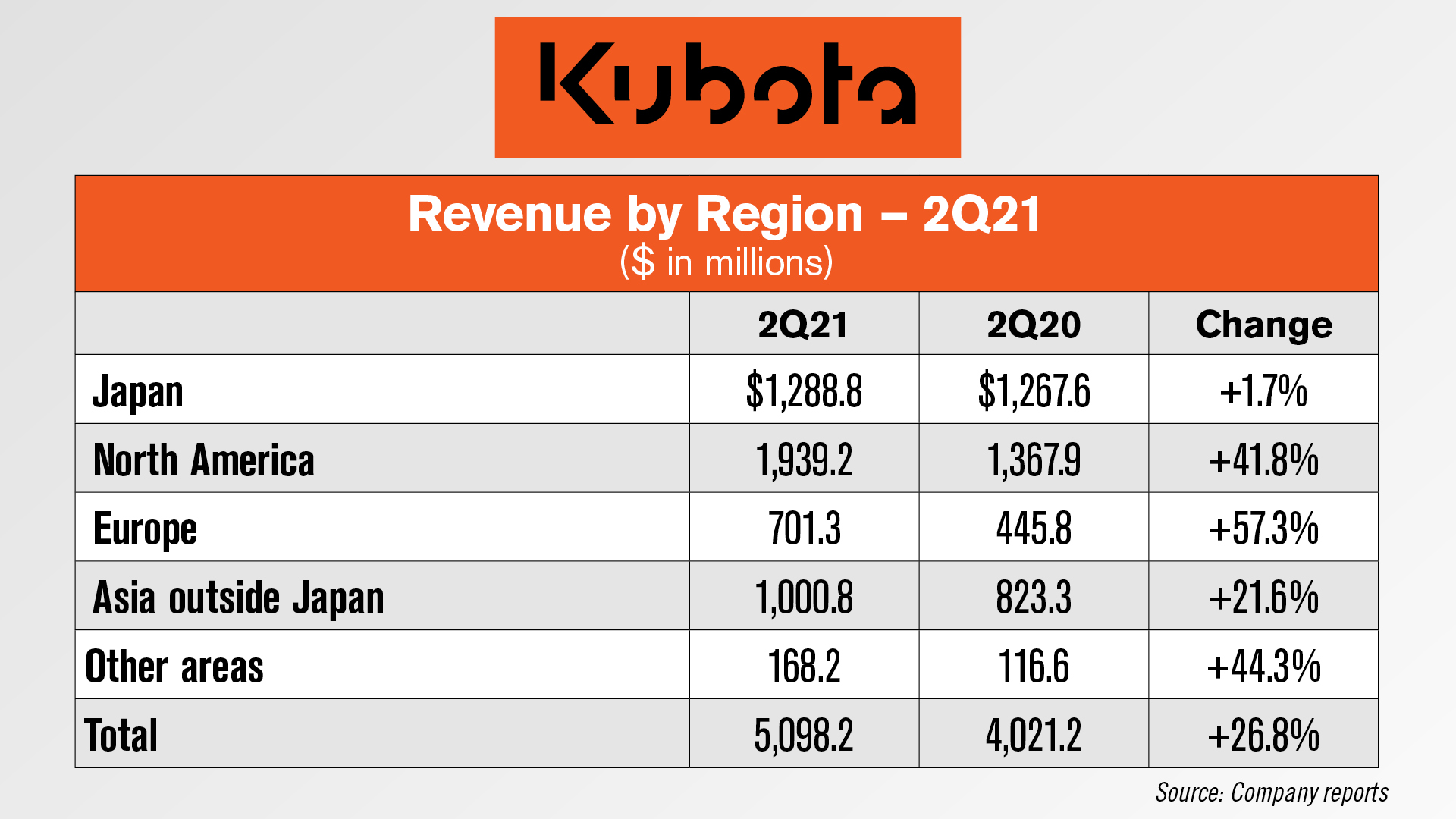 Kubota revised its forecasts for revenue for the year to $19.4 billion, an increase of $900 million. Overseas revenue is expected to increase due to a significant increase in sales of farm equipment in Asia outside Japan and more favorable exchange rates for the yen than forecast, in addition to strong sales of tractors and agricultural-related products in the company’s domestic market.

Deere is paying $250 million for the Silicon Valley-based startup, according to an announcement by the company on Aug. 5.

Bear Flag focuses on the autonomous technology stack — the hardware, sensors, actuators and computer software that goes on top of a machine — to help it efficiently and effectively navigate different environments.

The deal accelerates Deere’s development and delivery of automation and autonomy on the farm — a move that it views as a solution to the ongoing skilled labor shortage.

Dan Leibfried, director of automation and autonomy at John Deere, said Bear Flag’s ability to retrofit, in-market experience and commitment to safety principles made the company a good candidate for acquisition.

“I believe having a retrofit product allows us to tap into a large install base, and that's one of the big value drivers here is meeting customers where they're at, whether they're in the replacement cycle of upgrading their tractor or they're still working through the cycle of owning the tractor that they bought last year, the year before or 5 years ago. We want to meet them where they're at in order to give them this opportunity to experience autonomy in a meaningful way.”

Deere has been working with Bear Flag since 2019 as part of Deere’s startup collaborator program, an initiative focused on working with startups with technology that could add value for Deere’s customers.

Since then, Bear Flag has implemented automation on several farms in the U.S.

Aubrey Donnellan, one of Bear Flag’s founders, said the company has worked with growers of different sizes in California, operating in orchards, leafy greens and specialty crops like tomatoes.

The company had been mowing and spraying autonomously before finding a niche in autonomous tillage, which has been its focus for the last few years.

“What that really allows is growers can better plan for their operations and run operations longer, so we're seeing increases in productivity, being able to do more crop turns in the year, as well as being able to better right size their organizations for the fluctuations that they can't really foresee.”

Over the next six to 12 weeks, Deere will be exploring how its dealer network will interact with Bear Flag’s technologies, according to Liebfried.

He said dealers will likely receive training about selling and servicing autonomous equipment, similar to previous training and development programs Deere has put in place over the past two decades.

As for retrofitting, Liebfried said it’s yet to be determined how and when that might happen.

This week’s Dealers on the Move include Everglades Equipment Group and Butler Machinery.

Florida-based Everglades Equipment Group, the largest John Deere dealer in the state, has expanded its presence into Miami-Dade County with a store in Homestead. The move will bring a new level of customer service and equipment excellence to the area.

Everglades will begin its operations in a temporary space and will move into a new permanent site in November of this year.

AGCO dealer Butler Machinery announced plans for aggressive growth through the spring of 2022. Butler has purchased existing buildings in Watertown, S.D. and Sidney, Mont., a new territory for the dealership group. These two stores will bring the dealership to 20 total locations.

According to the latest Ag Economy Barometer report, farmer sentiment, as well as the Farm Capital Investment Index, were down slightly in the month of July. 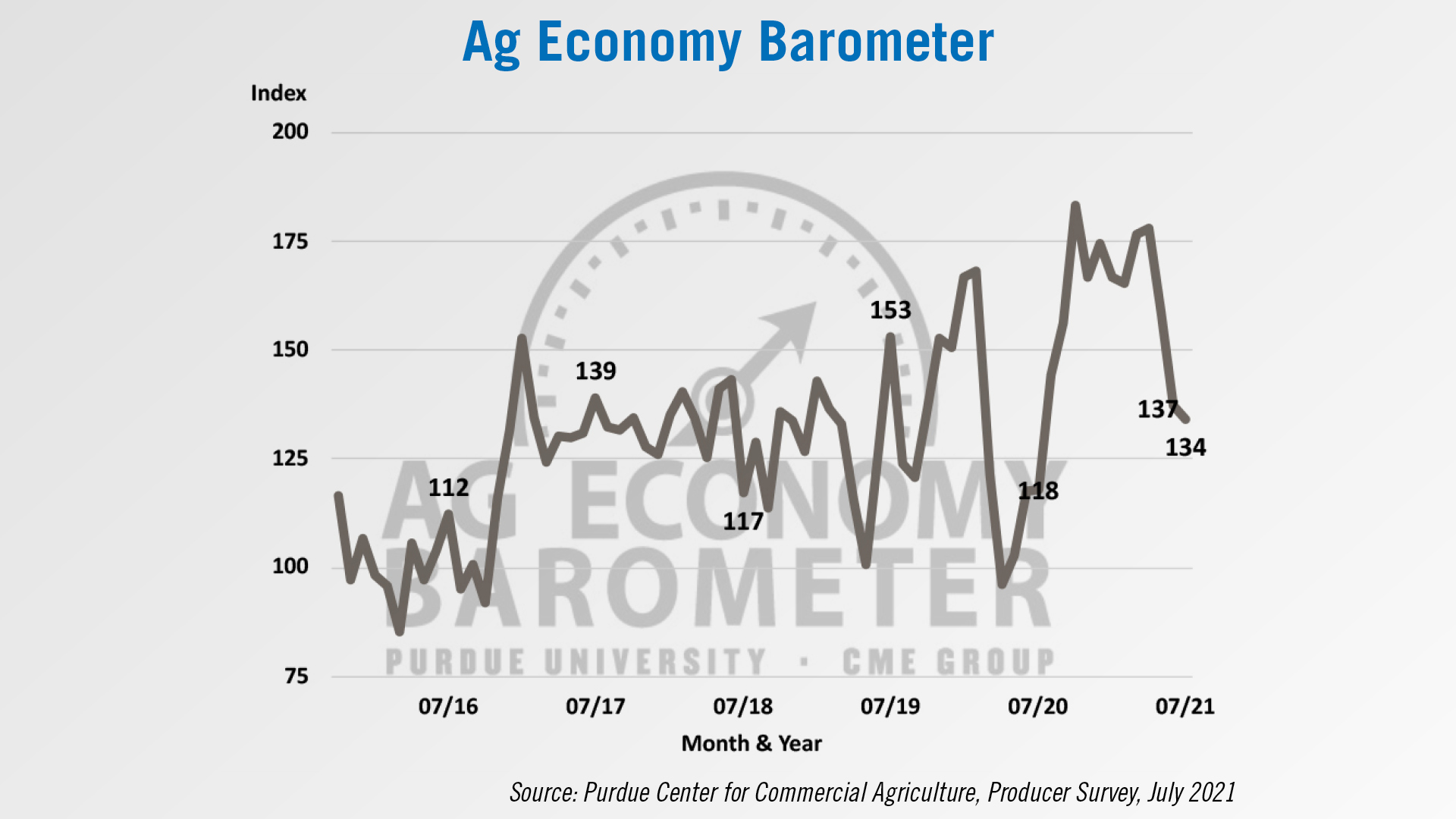 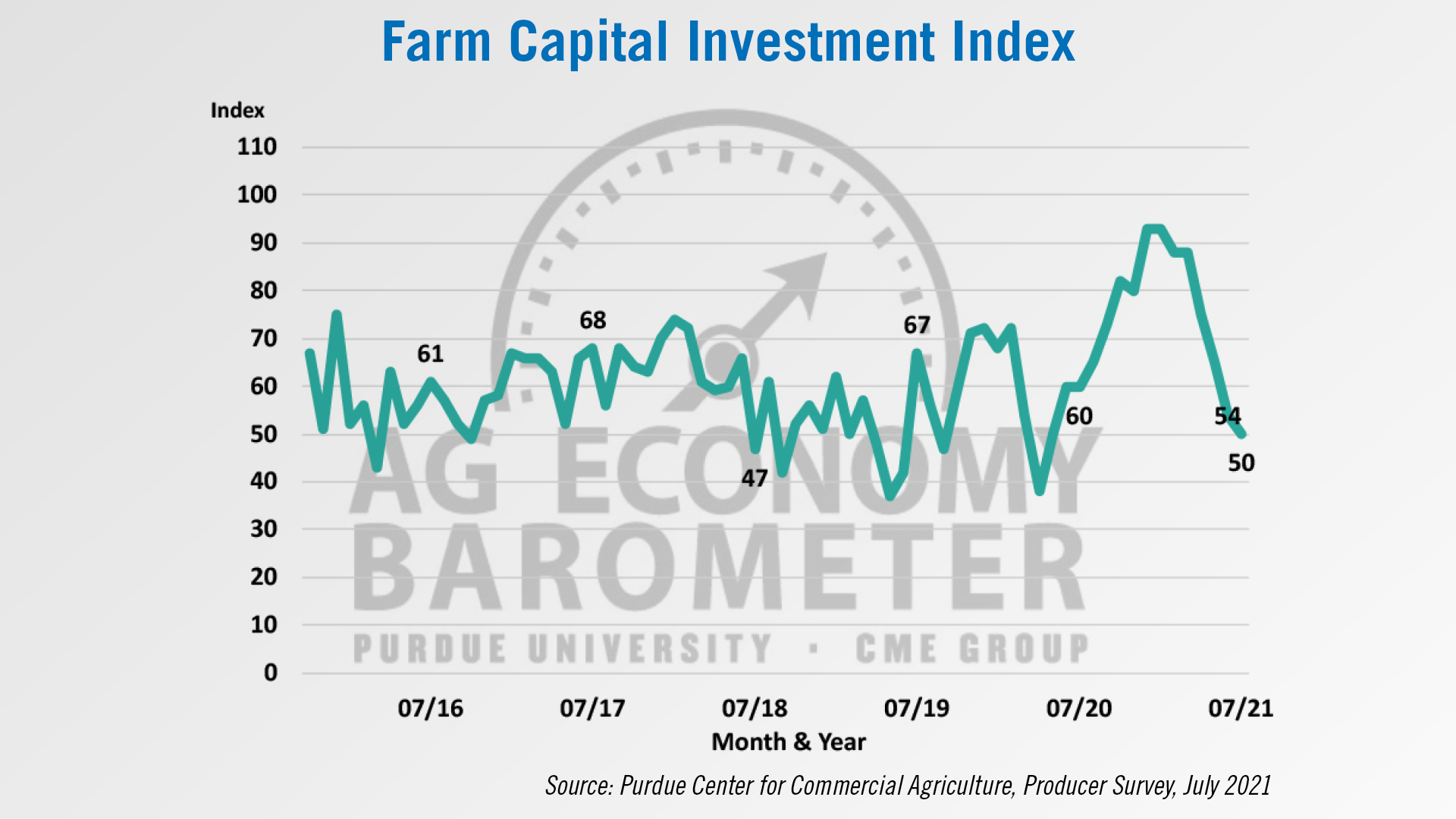 The Farm Capital Investment Index moved lower in July to a reading of 50, down 4 points compared to June. Weakness in the investment index was primarily attributable to the ongoing decline in plans for farm building and grain bin purchases in the upcoming year. Two-thirds of July’s respondents said their construction plans were lower than a year earlier, compared to 61% who said that in June. 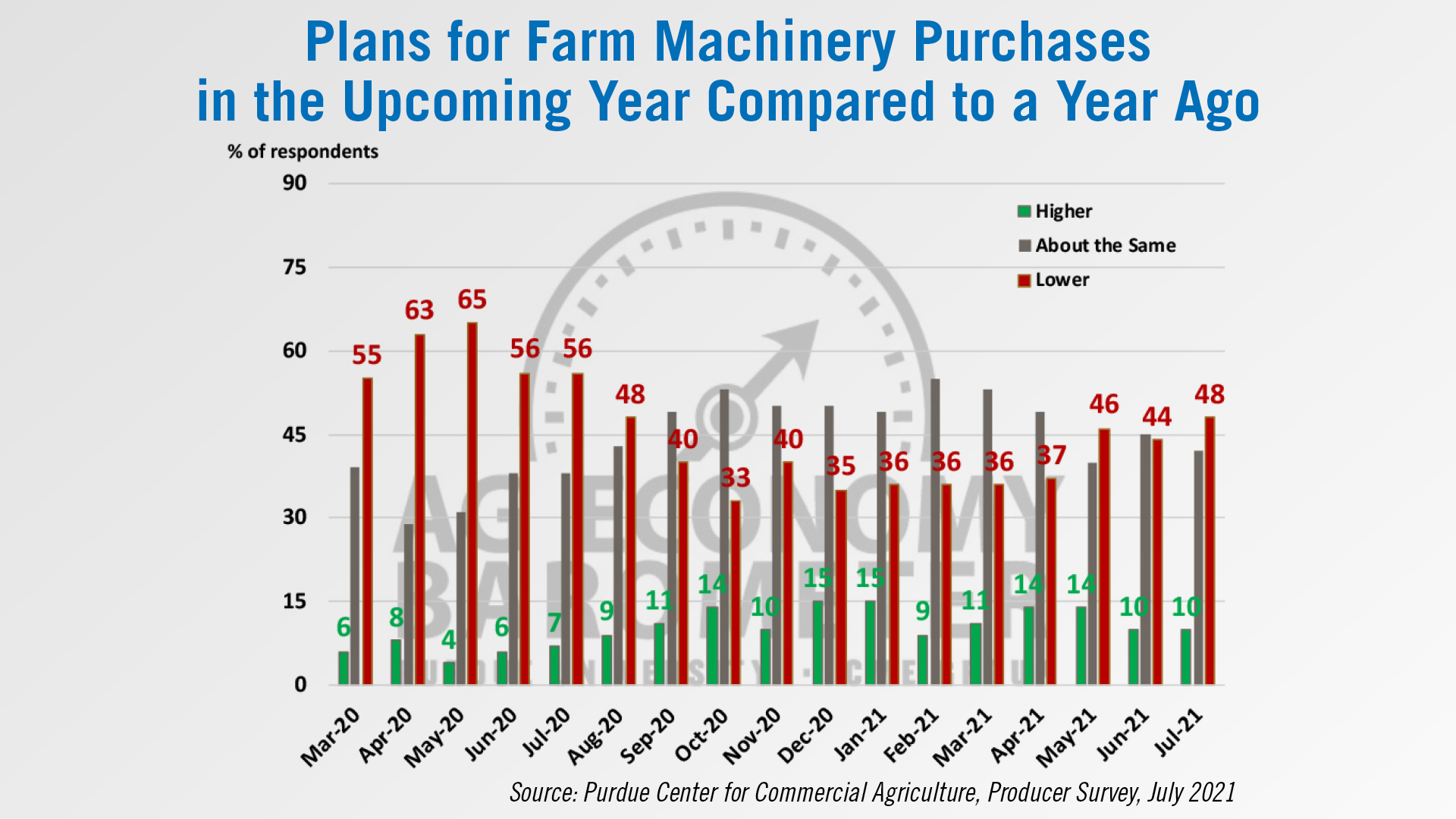 Some of the concerns picked up about future financial performance and the advisability of making large investments on the survey could be attributable to producers’ concerns about rising costs. Just over half of the producers in this month’s survey expect input prices to rise 4% or more over the next year, three out of ten expect costs to rise 8% or more and nearly one out of five (18%) expect input prices to rise by 12% or more. These expectations are markedly higher than the rate of 1.8% per year that input prices rose over the last decade.

Alamo Group, the manufacturer of Rhino Ag, Bush Hog and other shortline equipment brands, reported its second quarter 2021 net sales of $348 million, up 29% year-over-year. For the first half of the year, Alamo’s net sales were $659 million, up 13% vs. the same period last year. 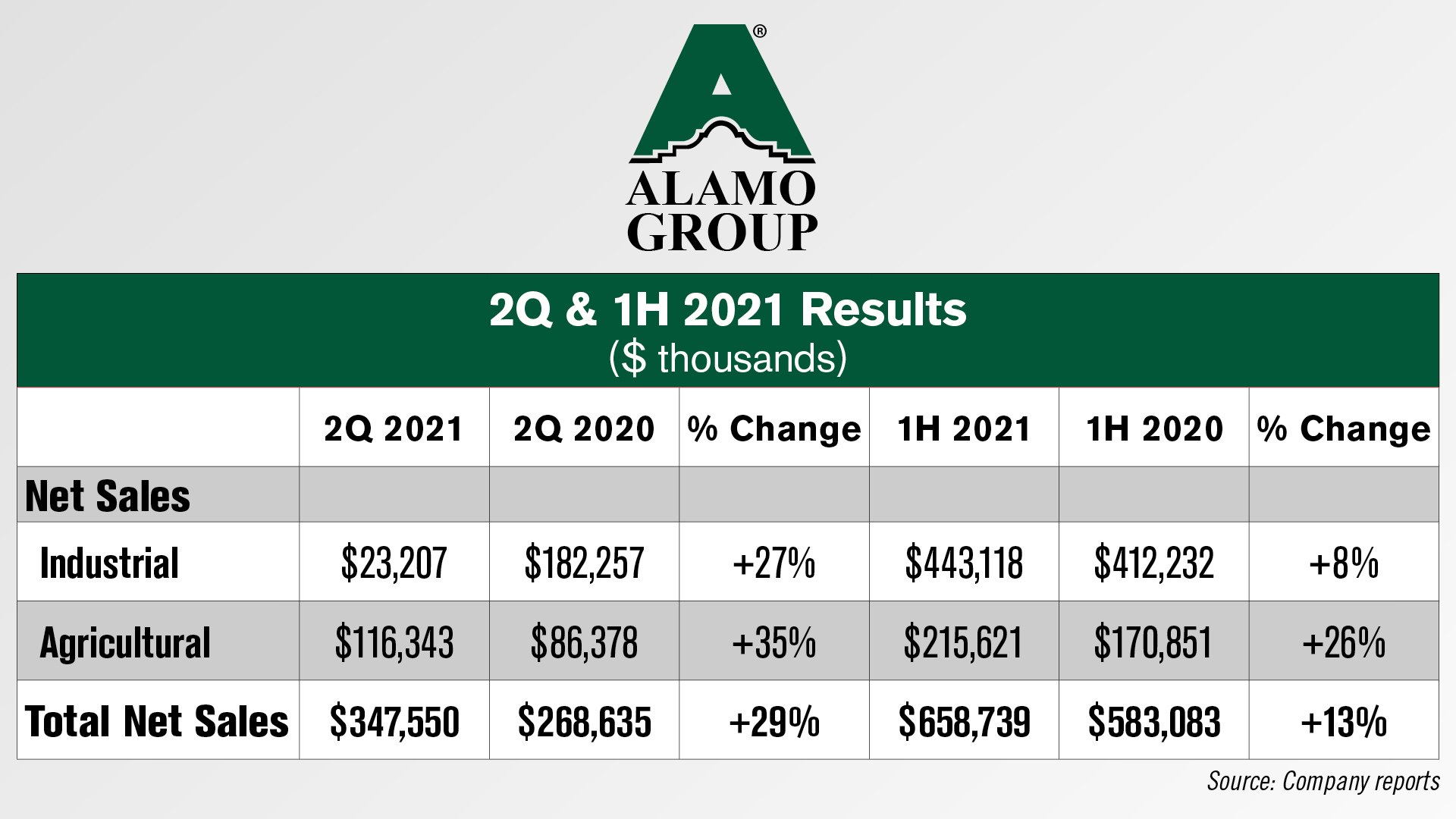 The Agricultural Division continues to enjoy high customer demand aided by low dealer inventories, but it was also affected by supply chain disruptions and input cost increases, which have yet to be fully offset by its pricing actions, the company says. However, prior year results in this Division were less affected by the pandemic as compared to the Company's Industrial Division.

Jeff Leonard, president and CEO of Alamo Group, said,  “Unfortunately, many raw material suppliers and industrial component manufacturers have not been able to add capacity fast enough to meet the higher demand. Certain critical components such as computer logic chips remain in severe shortage, and logistics networks are strained. Manufacturers such as Alamo Group rely on a stable supply chain and efficient logistics network to allow us to meet our customers’ needs in a timely manner. A shortage of skilled workers has further limited the ability of manufacturers to add capacity, most notably in North America.”