The latest episode of Ag Equipment Intelligence’s On the Record is now available! In this week’s broadcast we look at how dealers’ sales outlook for 2018 compares to that of the OEMs, cyber-based security threats to precision farming and an increase in non-real estate farm loans. In addition, we look into the University of Missouri’s Food and Agricultural Policy Research Institute’s forecast for net farm income in 2018 and 2019, North American ag equipment sales through the first three quarters of 2018 and an improvement in irrigation equipment sales for Lindsay.

According to Ag Equipment Intelligence’s latest Dealer Sentiments and Business Conditions Update, in September dealers forecast 2018 sales to be down 2%. This is down from the 1% decline forecast in the previous month 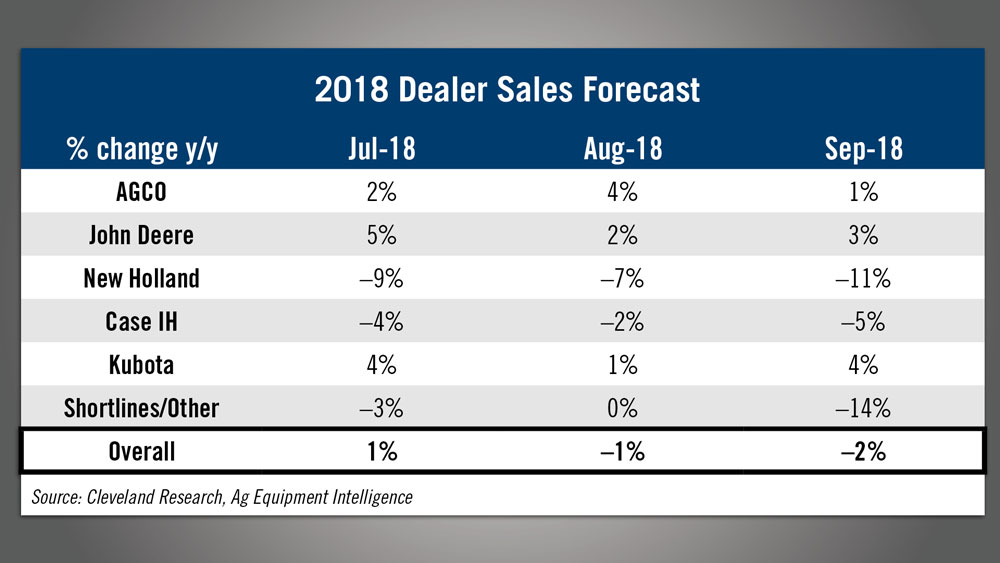 One dealer summed up the current conditions by saying, “This month, there was almost 60 inches of rain in our area. On top of that, crop prices remain poor, interest rates are rising, farmer cashflow is weak, steel prices are increasing, we have too much used inventory,  and we are under pressure by the major manufacturers to order at 2010 levels.”

Shortline dealers are forecasting the largest decline at down 14%. Kubota dealers are the most optimistic, anticipating sales to be up 4% in 2018. 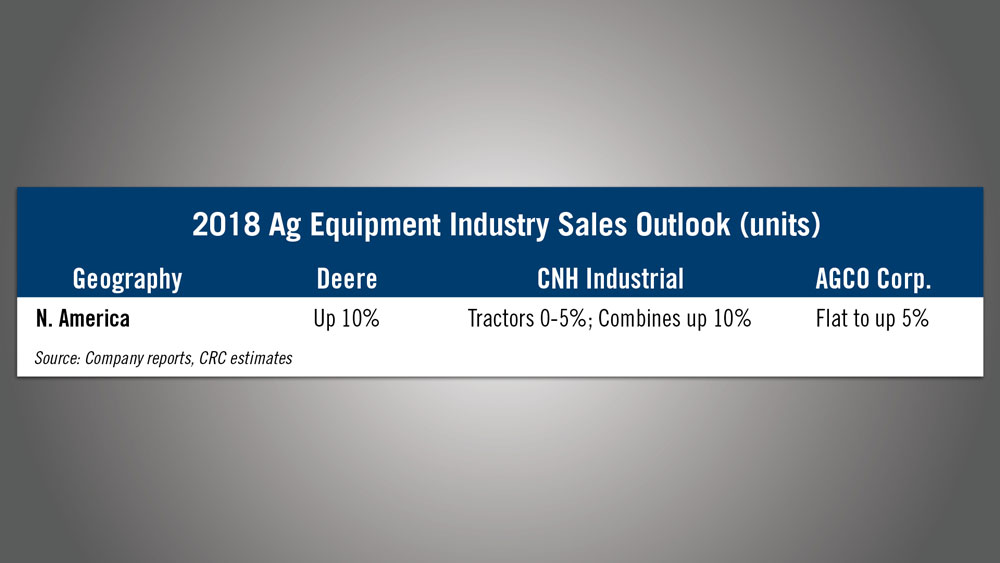 Looking to 2019, dealers’ forecast is for 1% year-over-year declines vs. the 1% growth expected previously with a net 13% of dealers expecting growth vs. 15% last month. Commenting on next year, one dealer says, “Customers haven’t felt the price increases yet. When 2019 comes around and we’ve sold through all of our old inventory, sales could decline.”

This week’s Dealers on the Move are Tingley’s Harvest Center and LandPro Equipment.

Royal Reesink B.V., a global distributor of ag equipment based in the Netherlands, has purchased a majority share of Tingley’s Harvest Center, a full-service Claas dealership with 3 locations in Saskatchewan and Alberta.

The partnership will focus on further growing the business and expanding the presence for Tingley’s Harvest Center and Claas products in western Canada. Shane Tingley and Claas will both remain minority shareholders in the company.

John Deere dealer LandPro Equipment as acquired Valley Ag and Turf, a 5-store dealership based in Halifax, Pa. LandPro is the largest Deere dealer in the Northeast by number of locations and now has 20 locations in New York, Pennsylvania and Ohio.

As ag technology evolves to include more machine learning and automated functions, the threat of data theft and other cyber crimes is increasing.

Taking a deeper look into what farmers, dealers and manufacturers need to be wary of, the Department of Homeland Security (or DHS) recently released its “Threats to Precision Agriculture Report.” The study uncovered a series of cyber-based threats unique to precision agriculture and categorized them into three categories: Threats to Confidentiality, Threats to Integrity and Threats to Availability.

Unique Threats to Integrity, which center on the increased adoption of equipment automation, robotics and machine learning, include falsification of data to disrupt crops or livestock, the introduction of rogue data into sensor networks and insufficiently vetted machine learning modeling.

Unique Threats to Availability refer to the untimeliness of machinery losses due to cyber intervention. Examples include disruption to navigation systems, disruption to foreign supply chains to access machinery and the failure of smart livestock production facilities.

To combat the various threats, the DHS emphasized the use of security controls commonly used in other industries. Derived from the Center for Internet Security, key examples include: 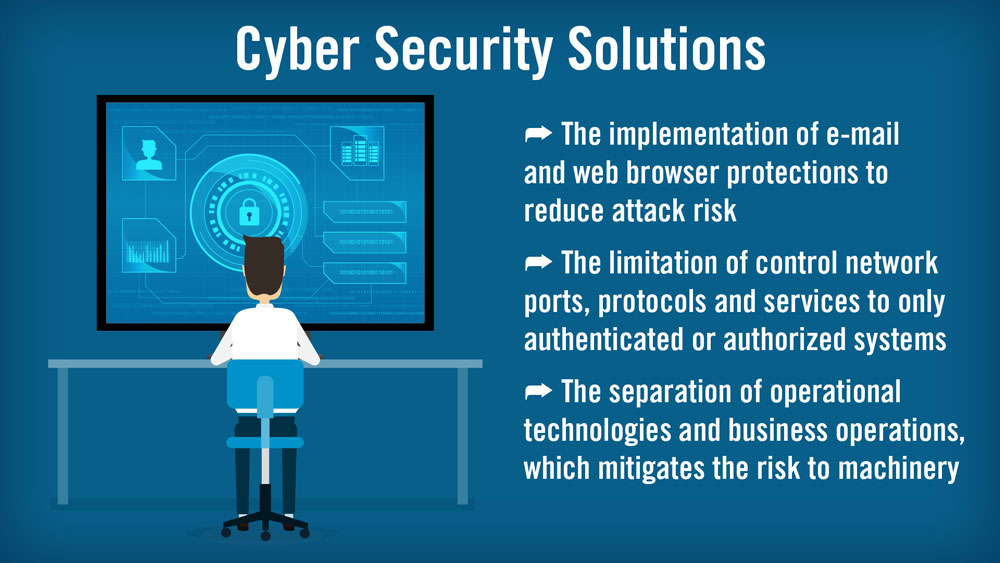 More information on precision ag cyber threats and solutions — in addition to the complete DHS report with detailed cyber threat scenarios — can be found on the recently launched Ag Equipment Intelligence Website. 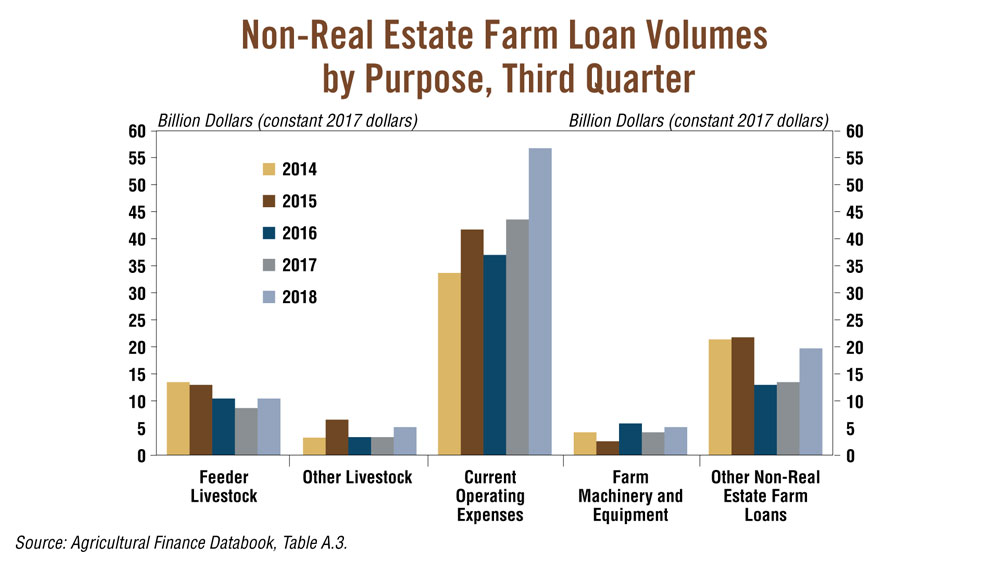 The data comes from the Federal Reserve Bank’s National Survey of Terms of Lending to Farmers. Although this spike in farm lending was driven primarily by operating loans, lending volumes increased notably for the purpose of buying farm machinery. The volume of operating loans for the quarter came in at $55.8 billion, a 27.7% increase from the same period of 2017. As for farm machinery loans, the volume totaled $5.2 billion, an increase of 33.3% from a year ago.

The large increase in loan volumes was also influenced by larger-sized loans. Continuing recent trends, the volume of very large loans rose sharply in the quarter. The volume of loans larger than $1 million nearly doubled in the quarter and accounted for nearly 40% of total non-real estate lending.

When compared to the previous quarter, the volume of non-real estate loans decreased by less than 3%, a much less pronounced decrease than the 10-year average decline of 14% between the second and third quarters.

Net farm income is a good indicator of how ag equipment sales will fare in the year ahead. According to the University of Missouri’s Food and Agricultural Policy Research Institute — or FAPRI, net farm income will decline slightly in 2018 and then again in 2019. 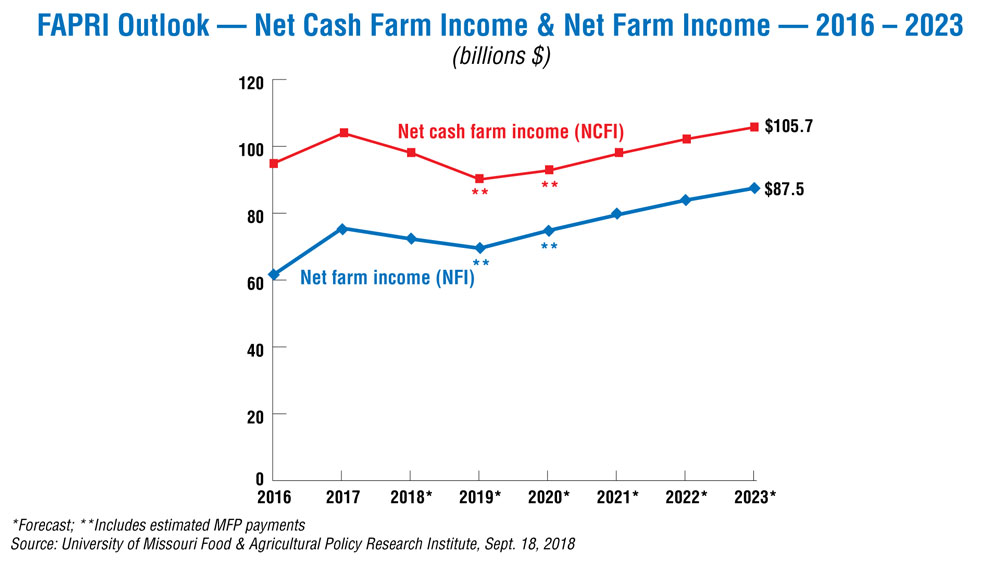 Pat Westhoff, who authored the FAPRI report, says they “assume $4 billion in MFP payments will be made in calendar year 2018 and another $700 million in 2019.” He adds that no additional MPF payments are assumed but notes it’s possibly a second round will be announced later this year.

Total North American ag equipment sales are up 7.3% year-over-year through the first three quarters of the year.

While equipment sales began to recover earlier in Canada, sales reports from the Assn. of Equipment Manufacturers show that sales are beginning to slide downward in Canada. Meanwhile, U.S. sales have continued to improve. 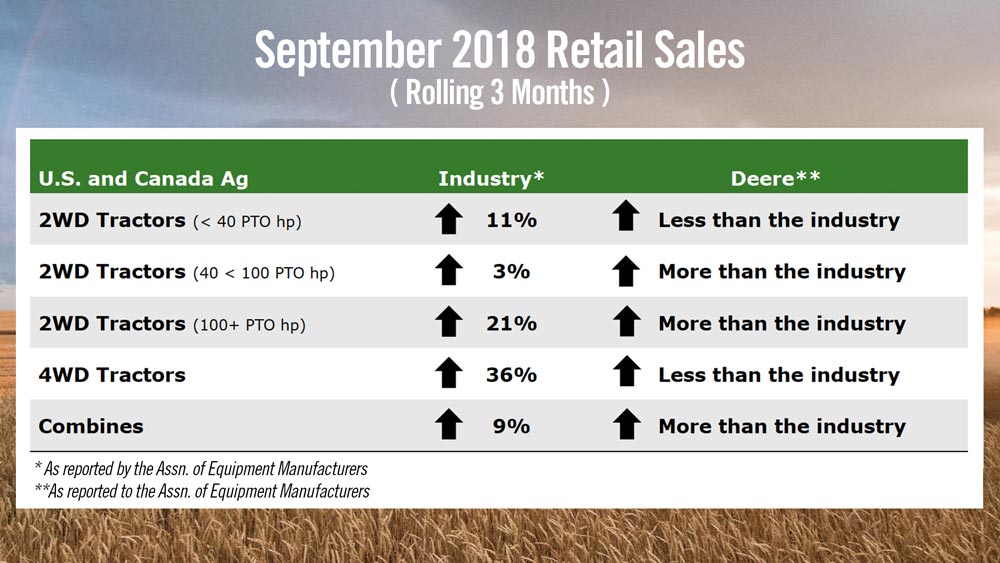 Lindsay, a global manufacturer and distributor of irrigation and infrastructure equipment, announced results for its fourth quarter and fiscal year ended Aug. 31, 2018. 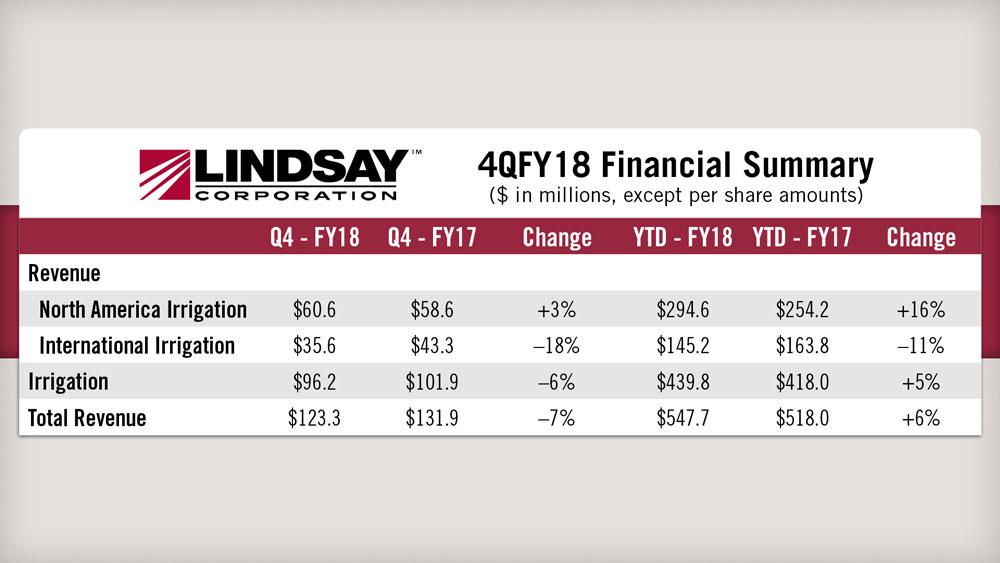 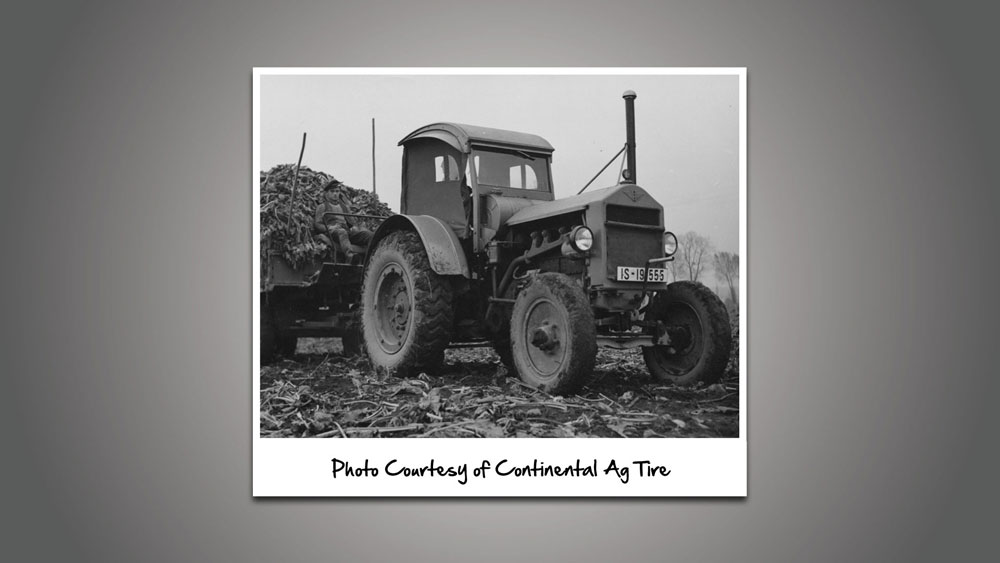 Ninety years ago Continental launched Europe’s first pneumatic tractor tire to the market with the T2 agricultural tractor tire. It was only four years later when the next development, the T3 AS tire, introduced an optimized tread and improved tractive force. In 1938, as Germany’s first tire manufacturer, the company decided not to link individual tread lugs in its new T4 AS tire. Since then, the tread lugs in agricultural tractor tires have been separated in the tread center, which created a higher tractive force. What is more, minimal slip ensured effective interlocking with the soil, which eliminated the use of chains and grippers.