The Purdue University/CME Group Ag Economy Barometer declined moderately in December to 127, which was 7 points below the index’s value one month earlier and 9 points below October’s reading.

According to the report’s authors, Jim Mintert, director, and Michael Langemeier, associate director of Purdue University’s Center for Commercial Agriculture, December’s sentiment decline, compared to a month earlier, was attributable to producers’ perception that current economic conditions on their farms deteriorated, combined with reduced optimism about the future. 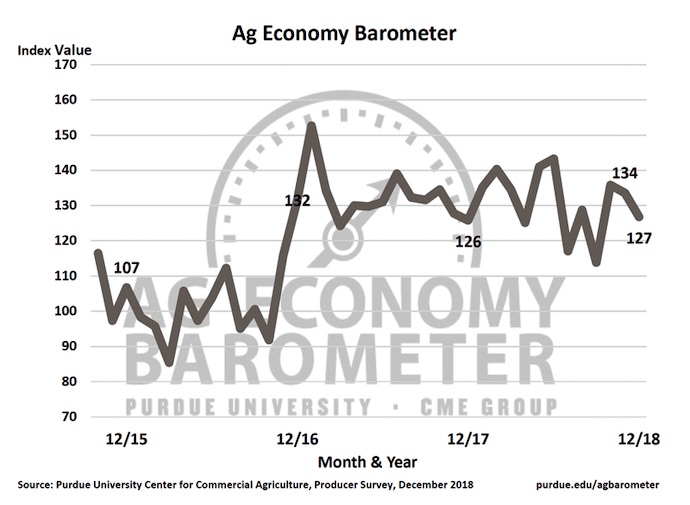 “When compared to a year earlier, however, producers’ perception of current conditions was markedly worse than in December 2017 as the Index of Current Conditions in December 2018 fell 30 points below the year ago level,” say the Purdue researchers. “In contrast, producers were actually more optimistic about the future in December 2018 than they were a year earlier as the Index of Future Expectations rose 15 points over the 12 month period. The weakening of farmer sentiment that took place from November to December appeared to impact farmers willingness to make large investments in their farming operations. The Large Farm Investment Index declined 5 points from November to December, which left it 9 points above the low established in September, but well below its year ago level.”

Mintert and Langemeier go on to say that trade disputes with key ag trading partners, including Mexico, Canada and China, continue to be a concern among producers. “Starting in mid-summer 2018 and prior to the December survey, producers showed signs of becoming more optimistic about future ag exports, but that changed on the December survey with the percentage of producers expecting U.S. ag exports to decline over the next 5 years increasing from just 10% in November to 26% in December.” 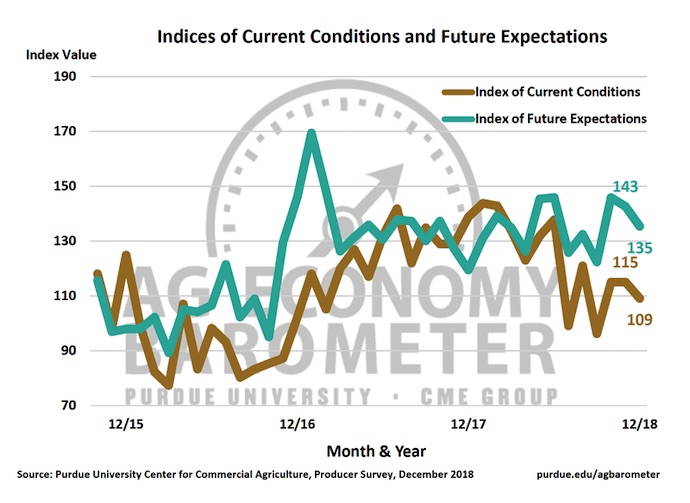 Looking ahead to 2019, producers overwhelmingly expect contraction to take place in the nation’s dairy herd and also think a contraction of the U.S. beef herd in the upcoming year is more likely than when they were surveyed a year ago. Producers expect expansion to continue in the U.S. hog herd, which is consistent with estimates in USDA’s recently released December Hogs and Pigs report.