The latest episode of On the Record is now available! In this edition, we report on an improvement in producer sentiment according to the latest Ag Economy Barometer from Purdue University. We also discuss the new agreement between Farmers Edge and CNH Industrial. A number of manufacturers and dealers reported their latest earnings in the last week, including Cervus Equipment, Rocky Mountain Dealerships, AGCO, CNH Industrial and Alamo Group. In addition to its third quarter earnings, Rocky Mountain also announced plans to open an outlet store for late-model used equipment in the U.S.

Producer sentiment improved in October according to the Ag Economy Barometer, a monthly survey of producers conducted by the Purdue University Center for Commercial Agriculture.

October’s reading was 136, a 22-point increase in the index compared to September and nearly equal to its level one year ago. 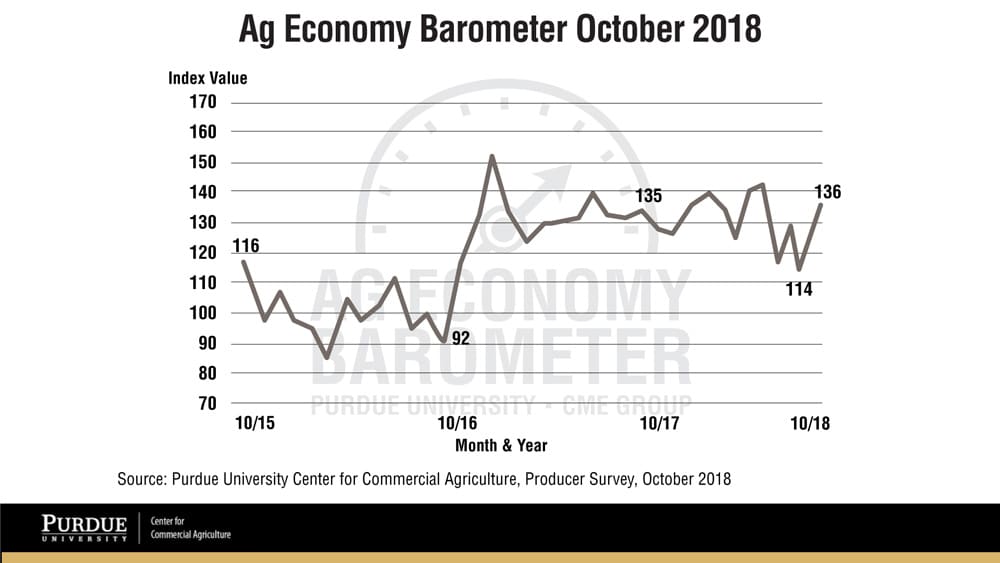 Despite the improvement, producers remain cautious about making large investments in their farming operations. However, the percentage of producers who said now is a bad time to make large investments, such as machinery purchases dropped to 72% from 78% in September. Those who said it was a good time increased to 24% from 20% the prior month. 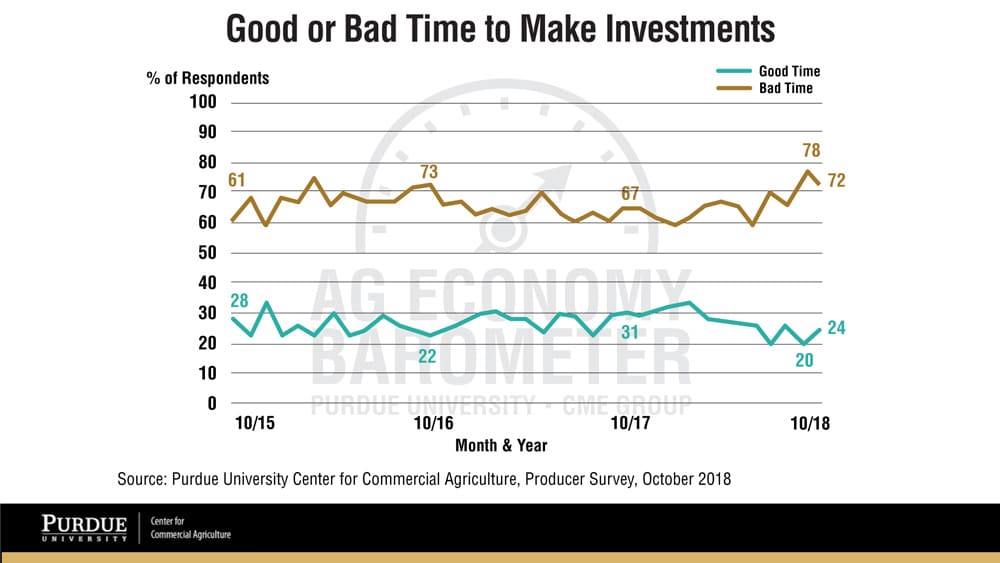 Mintert and Langemeier say, “Combining these two responses into a diffusion index that characterizes farmers’ perspectives on making investments in farm machinery and buildings yielded a reading of 52 in October, up 10 points compared to September, but still well below readings from last winter and spring, which were in the 60s and low 70s.

This week’s Dealers on the Move is H&R Agri-Power.

Case IH dealer H&R Agri-Power has acquired JL Farm Equipment, which has stores in Poseyville and Princeton, Ind. Both locations will continue to operate under the JL Farm Equipment name. H&R has 16 other locations, including its irrigation division.

“It’s another strategic relationship with a digital solution that complements what we’re doing on the machine side relative to the AFS technology, and the data that provides producers to machine operation and their conditions and locations, etc. Then you combine that with agronomic data, if you will, that Farmers Edge supplies and put that together, you develop this ecosystem that gives a producer the opportunity to collect the data and then share it with whomever he needs.”

Farmers Edge Chief Product and Strategy Officer Ron Osborne says Case IH and New Holland dealers have already been rolling out the expanded platform, utilizing special programs set up through the agreement to help phase the services in. The ultimate goal, he adds, is giving dealers the tools to provide farmers with a complete digital infrastructure.

“From a technology standpoint, we’re bringing everything to bear and so are they into this partnership. Taking daily remote sensing or daily satellite imagery, we have thousands of weather stations across North America. You add in all of our ecosystem partners — and I think that’s something you’ll start to see, some continual announcements in perpetuity —is our growing ecosystem, feeding it information into this unified platform.”

The announcement marks one of several partnerships made by Farmers Edge in 2018. Agreements earlier in the year were made with Raven and PartnerRe to design and implement digital ag solutions, as well as with Titan Machinery for the distribution of services and full integration of field equipment data.

Cervus Equipment, one of John Deere’s largest equipment dealers, reported that it achieved record third quarter equipment sales in its Agriculture segment, increasing 9% compared to the third quarter of 2017. At the same time, the company said equipment gross profit margins contracted. Consolidated revenue for the quarter was also up 9%. 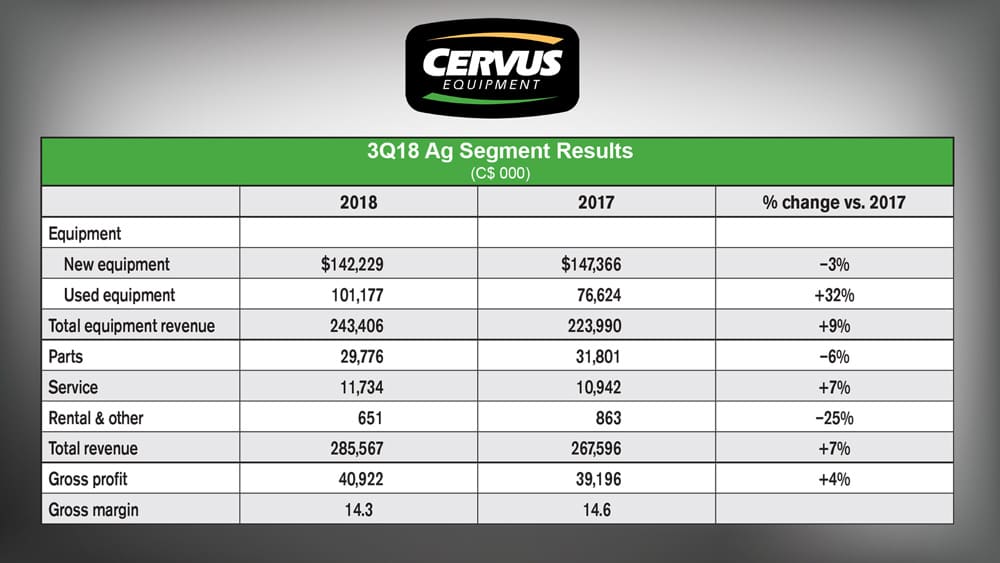 The company reports that weather conditions shifted harvest activity into the fourth quarter of 2018 compared to 2017 when harvest was in advanced stages by the end of the third quarter. Cervus indicated that producers’ need for additional machine hours in a narrow harvest window resulted in used equipment sales increasing 32% in the quarter, although at a lower gross margin compared to the third quarter of 2017. 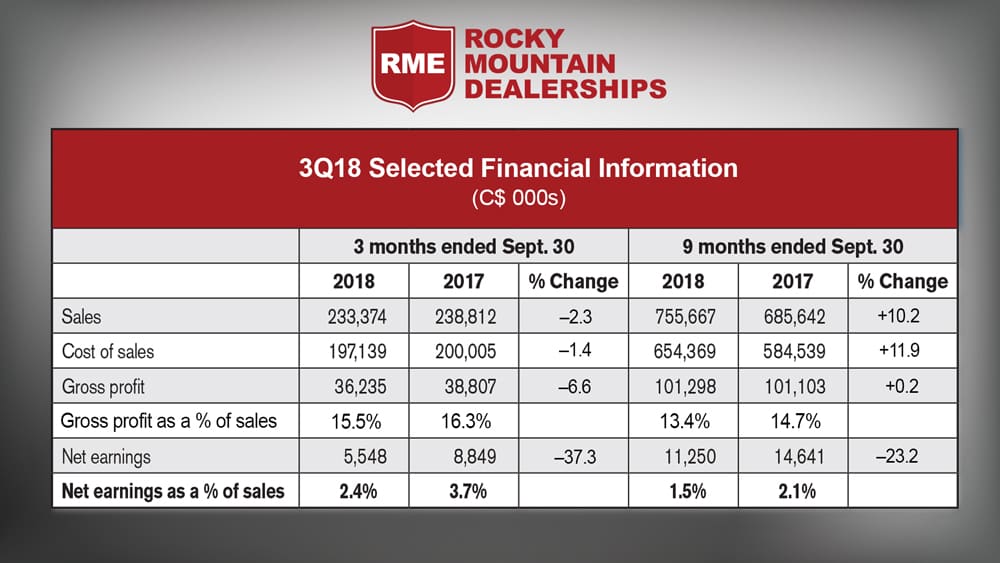 Early snowfalls across the Canadian Prairies stalled harvest activity throughout mid- to late-September, decreasing in-season demand across all categories, the dealership group says. Despite the impact of the unusual harvest, compared to the second quarter of 2018, Rocky Mountain continued to draw down its inventory of new and used equipment even with the addition of $30 million in inventory from acquisitions in the third quarter.

Rocky Mountain announced it has begun an initiative to sell late-model used equipment to farmers based in the U.S. via an outlet store in Tonganoxie, Kan., which is located on the outskirts of Kansas City.

Rocky Mountain’s move into the U.S. was expected. During an interview with Ag Equipment Intelligence last summer, the dealership group said expanding its geographical reach would be part of its 5 year growth plan.

According to the dealership group, the new facility is situated in close proximity to the sizeable U.S. agricultural markets of Kansas, Iowa, Nebraska, Missouri and Oklahoma as well as manufacturing facilities from which new equipment is routinely being shipped to Rocky Mountain locations within Canada. “By backhauling late model used equipment to our new Kansas location, we are able minimize the associated transportation costs,” the company said. 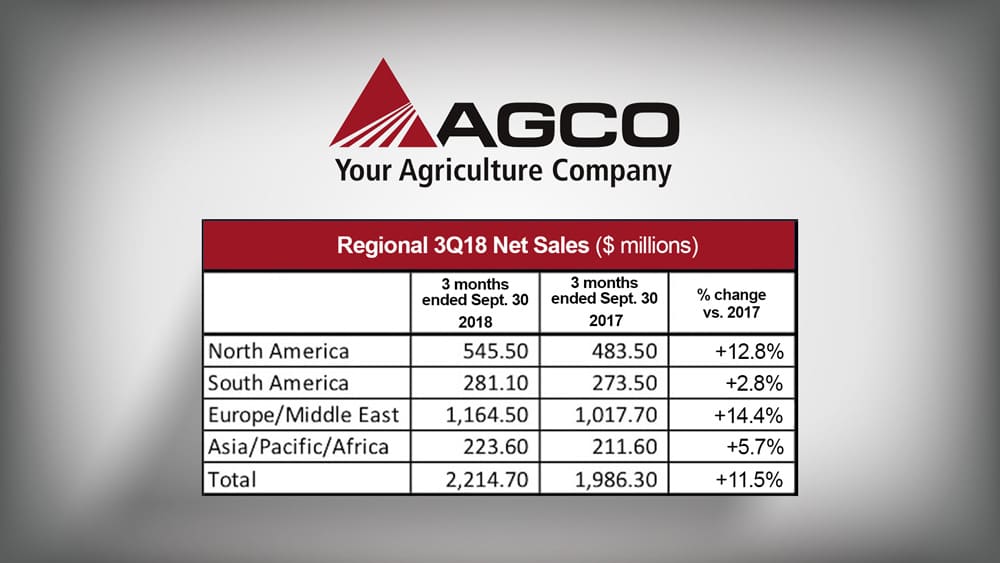 On a regional basis, the Europe/Middle East saw the largest increase. Sales for the quarter were $1.2 billion, up 14.4% vs. the third quarter last year. In North America, third quarter sales were up 12.8% to $545.5 million. South America saw a moderate improvement of 2.8% for the quarter and the Asia/Pacific/Africa region had a sales increase of 5.7% during the quarter.

Year-to-date, North American sales have increased 22.2% in 2018. Precision Planting, which was acquired in the fourth quarter of 2017, contributed sales of approximately $97.2 million in the first 9 months of 2018. 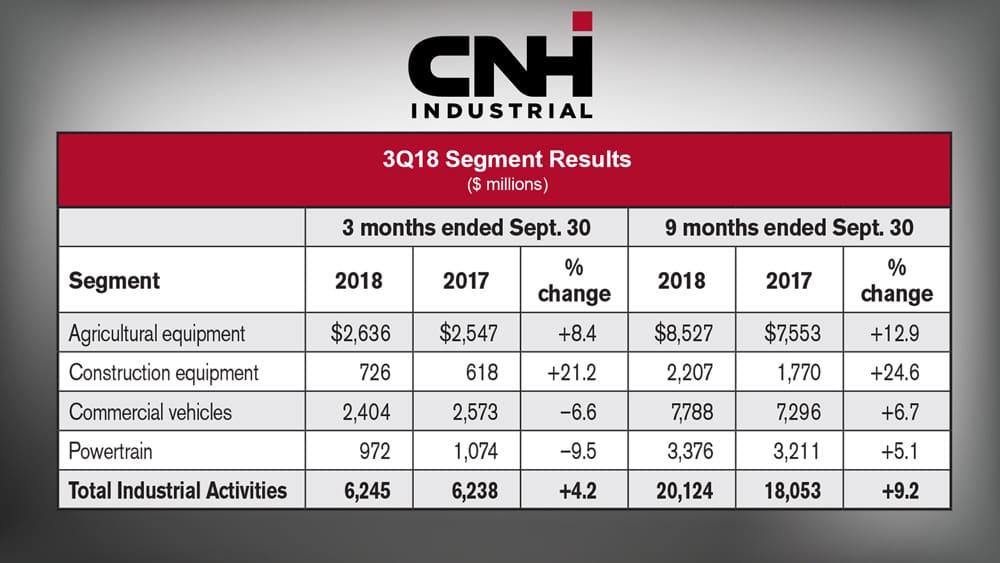 Ag equipment sales increased 4% during the third quarter compared to the same period last year. The increase was primarily the result of price realization across all regions and higher sales volumes in NAFTA, partially offset by a revenue decrease in APAC, primarily Australia.

"We're going to have a good 2018. The order book still looks good compared to last year. We've felt … there's a little bit of caution out there with everything that's happening in trade and with commodity prices and all of that but we're still positive and our order board is still [positive] and we're going to finish the year well."

Shortline manufacturer Alamo reported record net sales and net income for the third quarter of 2018 and the first 9 months of the year. While overall net income was up 41.9% and net sales were up 7.1%, the company’s ag division saw sales drop for the quarter. 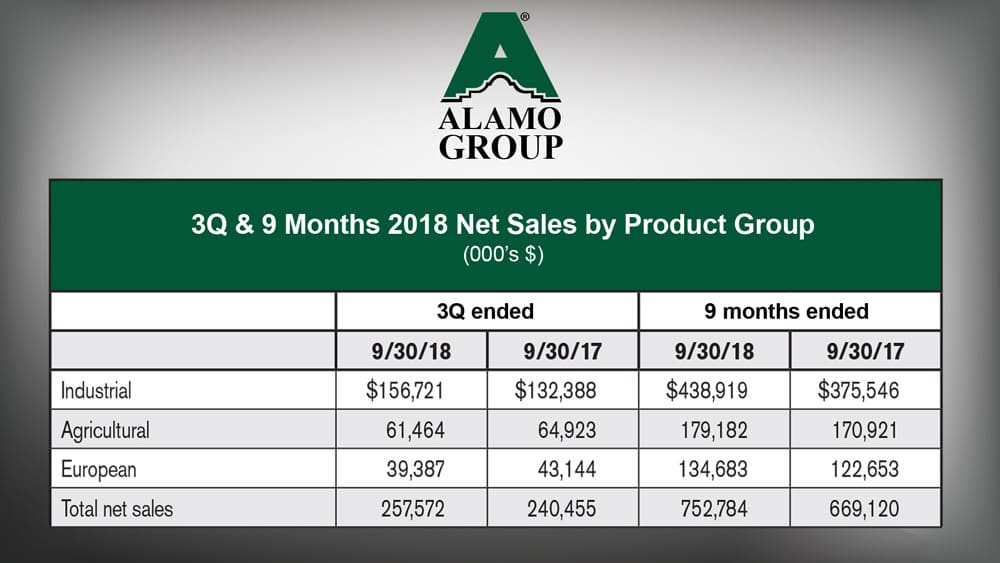 Regarding the ag division’s performance during the period, Ron Robinson, Alamo Group’s president and chief executive officer, said the company is concerned about the agricultural outlook “which had been showing signs of strengthening, but now is faced with a backdrop of declining farm incomes and the impact that new tariffs are having on demand for certain agricultural commodities.”

He adds that while the ag division results are off, they were still good mostly due to improvements in operational efficiencies which helped Alamo mitigate the impact of higher input costs and lower sales. 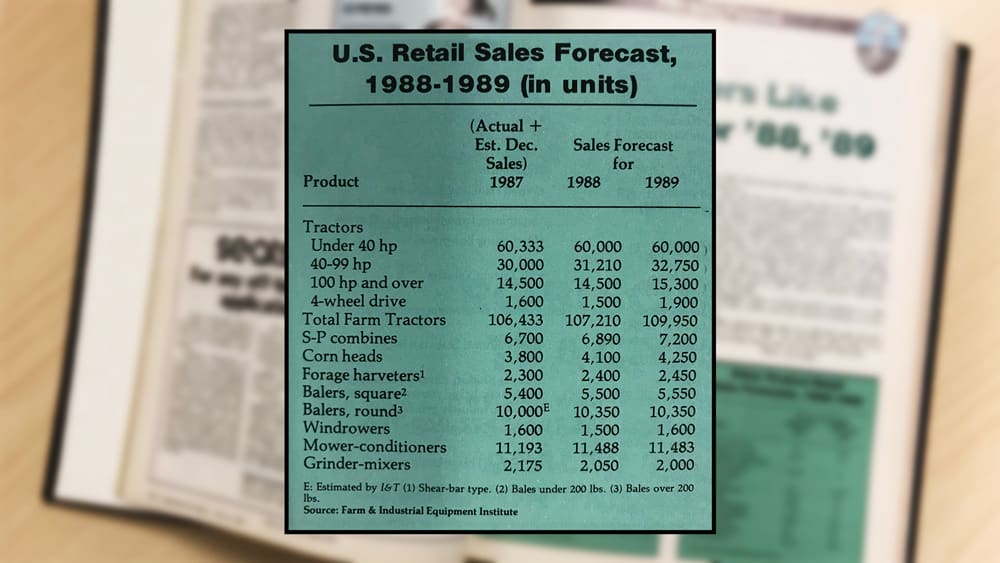