In this episode, we discuss the upcoming contract negotiations between CNH Industrial and the United Auto Workers for two of the OEM's plants. In the Technology Corner, Michaela Paukner looks at Clean Seed Capital's goal to revolutionize planting with its SMART Seeder Max. Associate Research Editor Ben Thorpe shares some of the initial findings in Rural Lifestyle Dealer's 2022 Dealer Business Trends & Outlook report. Finally, CNH Industrial and AGCO both report strong 4Q and FY 2021 results.

CNHI to Enter Negotiations with UAW in April

According to statements from the union’s officials, United Auto Workers will begin negotiating a 6-year contract with CNH Industrial in early April of this year. UAW International Director of Public Relations Brian Rothenberg confirmed in an email that the union’s contract covering Case IH workers will expire on April 30, 2022. 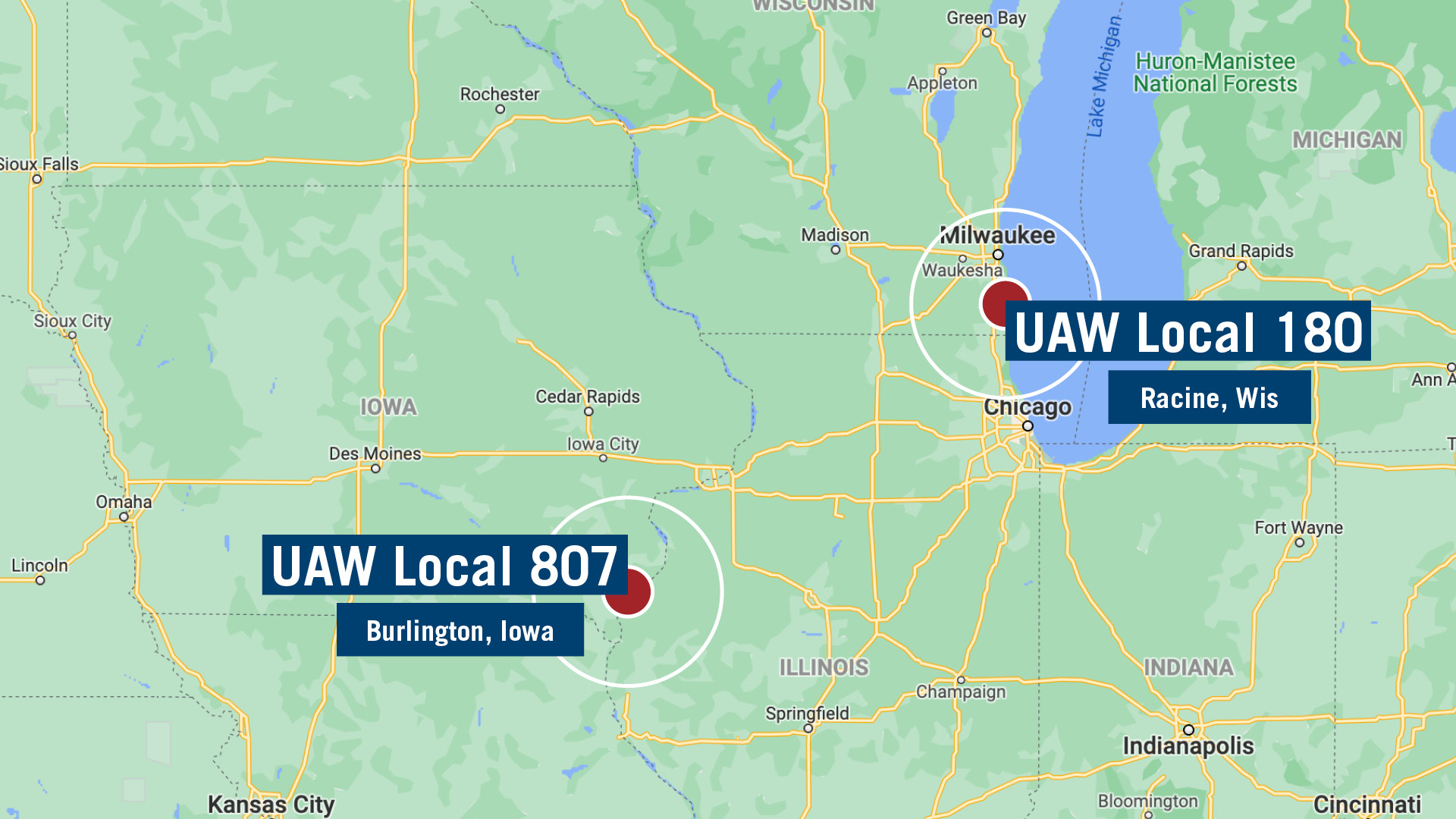 Workers at two factories are covered under this contract: the Burlington, Iowa, plant which manufactures tractor loader backhoes, bulldozers and corn and auger heads and the Racine, Wis., plant which manufacturers the Magnum series tractor. Workers at the Burlington factory are represented by UAW Local 807 and those at the Racine factory are represented by UAW Local 180.

Ag Equipment Intelligence spoke with UAW Local 807 President Nick Guernsey for additional details about the upcoming contract, which he says will cover about 1,200 employees. He stated the local unions will begin prepping for negotiations in mid-March, with formal negotiations beginning in early April.

Guernsey says the outcome of the UAW strike at John Deere factories last fall will impact what the unions looks for in the Case IH contract.

“Obviously, with John Deere, it kind of put us into a different position. They hit it out of the ballpark. They did something that probably we’ve never seen and may never be seen again. So, what we’re looking at, at this time, for our contract is we want to maintain industry standards. We want to be competitive within the industry, and the only way to do that is to up some of the things that were lacking in the contract, wages being one, and benefits.”

CNH Industrial last faced a strike with UAW workers back in 2004,  which a 2004 report from FarmProgress stated was centered around “the company's desire to align union worker compensation and health care more closely with the company's many non-union employees.” The report stated that, at the time, around 650 of CNH Industrial’s 10,000 North American employees were represented by a union.

We reached out to CNH Industrial for comment but didn’t hear back in time for this broadcast.

Ag Equipment Intelligence is watching the development of the contract negotiations closely, and we will keep you up-to-date on events as they occur.

This week’s Dealers on the Move include Florida Coast Equipment, AHW and King Ranch Ag & Turf.

John Deere dealer AHW has purchased Buck Bros. Inc’s four stores in northern Illinois. As of February 17, AHW will have 20 locations throughout Illinois and Indiana.

The no-till planter allows the operator to control up to 5 independent products as well as 6 in-ground placement options per row, providing prescription input accuracy on an almost plant-by-plant level.

Colin Rush, chief operating officer of Clean Seed Capital, says the 60-foot toolbar combines the large-acre efficiency of an air seeder with the precision of a planter. It uses 300 different electric meters to apply herbicides, nutrients and more at a field speed of up to 5 miles per hour.

The SMART Seeder MAX system is built around being able to handle massive amounts of data. Rush says the base level standard can handle changing rates every square foot, which would equate to 1.2 billion changes in a half-mile square field. That amount of data would only use 15% of the machine’s CPU. The data can be exported for high-resolution prescription maps.

The company is opening up pricing in March for the 2023 production run and anticipates selling out by mid-summer, as its customers seek more sustainable and precise planting solutions. Rush says the company signed up Canadian dealers for its 2022 pre-commercial run, and this year will be announcing dealers in the Dakotas and Minnesota.

Clean Seed Capital is a publicly traded company, which allowed it access to capital to fund the development without the short timeline for return on investment often required by Silicon Valley venture capital firms.

“Agriculture has a long lead time for innovation. You're talking 5-10 year development time for, for something as significant as this, so we took the company public for access to capital. What's interesting is even though we're publicly traded, we call ourselves a privately held publicly traded company because 75% of our investors are farmers, are people in the ag industry and insiders in the company that want to see this technology develop.”

Rush estimates the company has invested nearly $25 million in R&D over the past 10 years to get the SMART Seeder MAX to where it is today.

AGCO reported its fourth quarter and full year 2021 results on February 8. For the quarter, net sales were up 16% to about $3.2 billion vs. the fourth quarter of 2020. 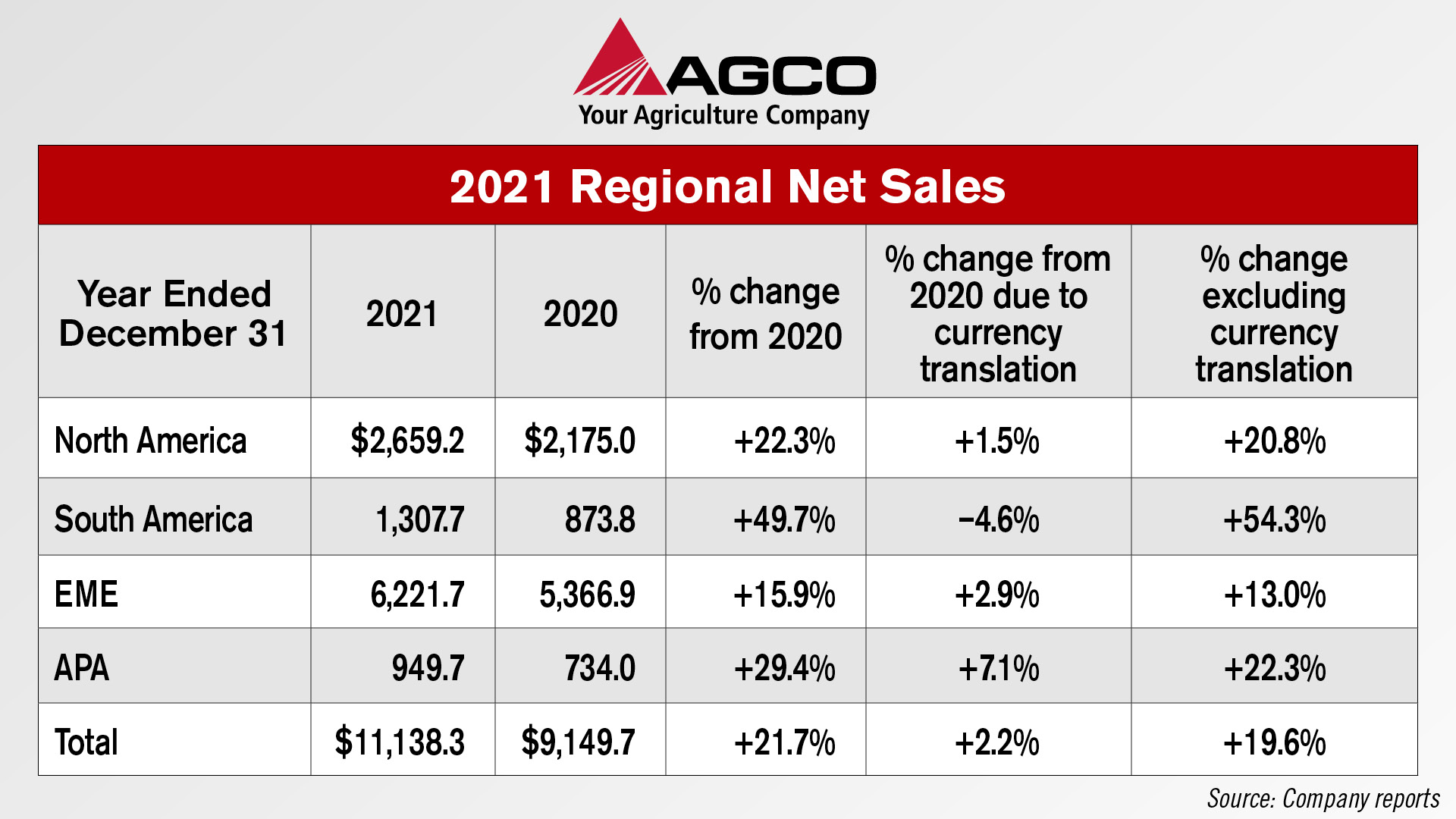 Net sales in the North American region increased about 21% for the full year of 2021 compared to 2020, excluding the positive impact of currency translation. Increased sales of high horsepower and mid-range tractors as well as Precision Planting products represented the largest increases.

AGCO’s South American net sales increased 54.3% for the full year of 2021 compared to 2020, excluding the impact of unfavorable currency translation. Sales increased significantly across all the South American markets with growth achieved in tractors, combines and planting equipment as well as replacement parts.

Net sales in AGCO’s Europe/Middle East region increased 13.0% for the full year of 2021 compared to 2020, excluding favorable currency translation impacts. Increased sales of tractors, combines and replacement parts contributed to growth across all of Europe.

Asia/Pacific/Africa net sales increased 22.3%, excluding the positive impact of currency translation, during the full year of 2021 compared to 2020. Higher sales in Africa, Australia and China produced the majority of the increase. 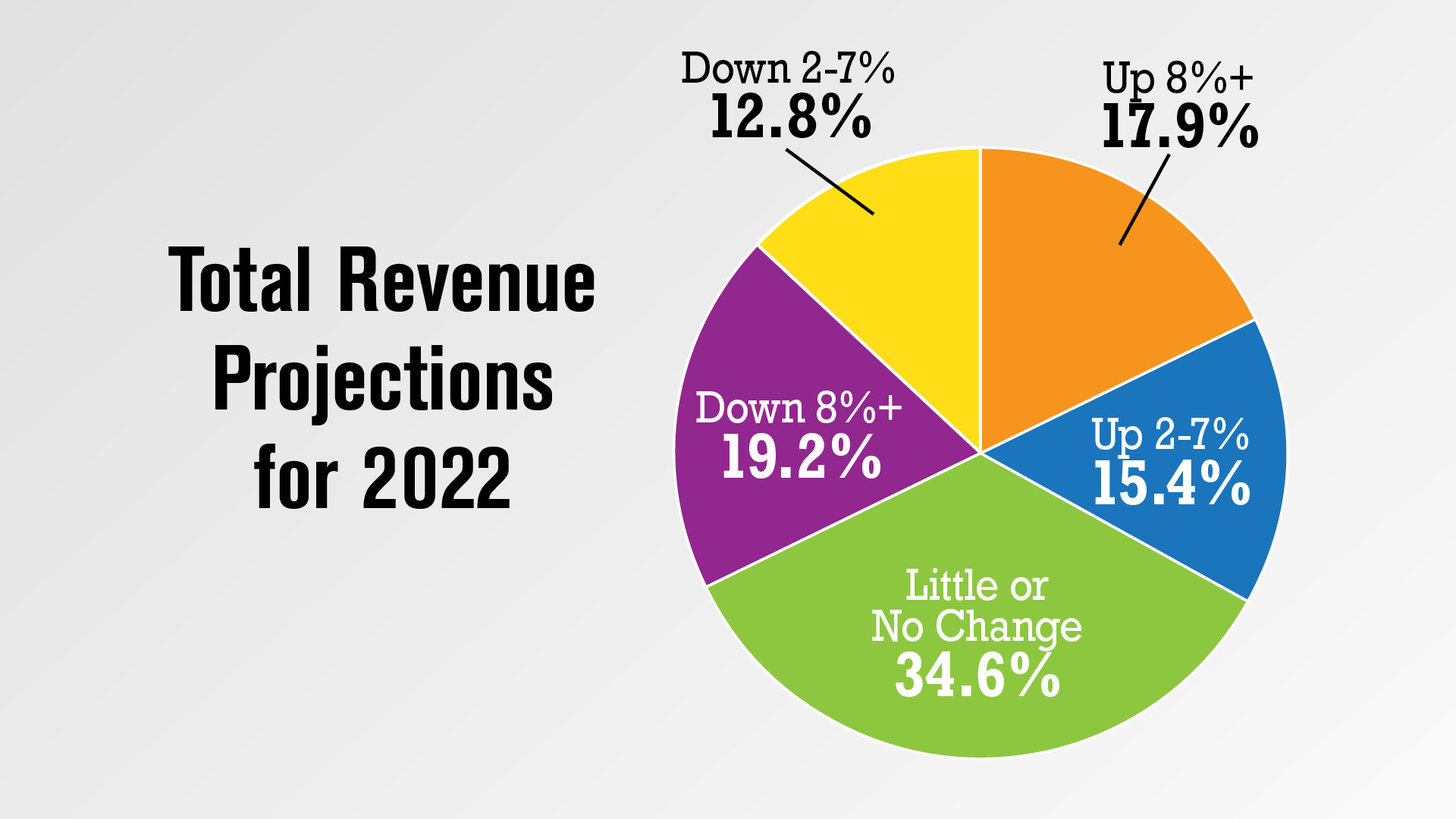 Nearly 35% of dealers anticipate total revenues for 2022 will be in line with last year.  And 32% of dealers say revenues this year will be down by at least 2%.

The supply chain challenges and low inventory is largely the cause of dealers’ lower forecasts. One dealer commented, “Manufacturers are demanding orders, although they have no clue as to delivery or build dates … If all these orders are somehow delivered, there will be the largest glut of new inventory ever witnessed.” 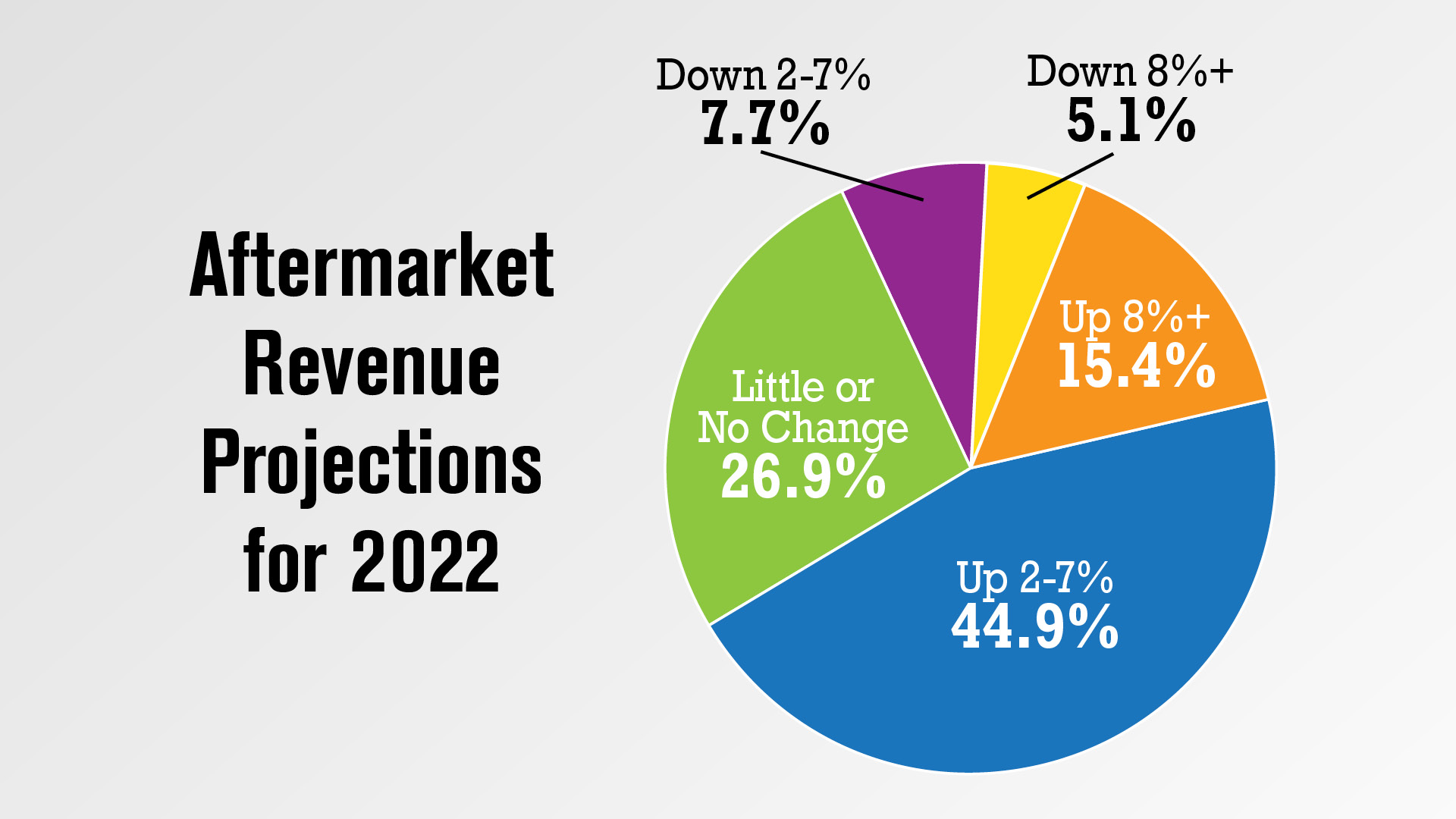 The full report on this year’s survey results will be published in the March issue of Farm Equipment and will also be available on RuralLifestyleDealer.com later this month.

On February 8 CNH Industrial also reported its fourth quarter and full year 2021 results, the last year of operations prior to the demerger of Iveco Group effective January 1. 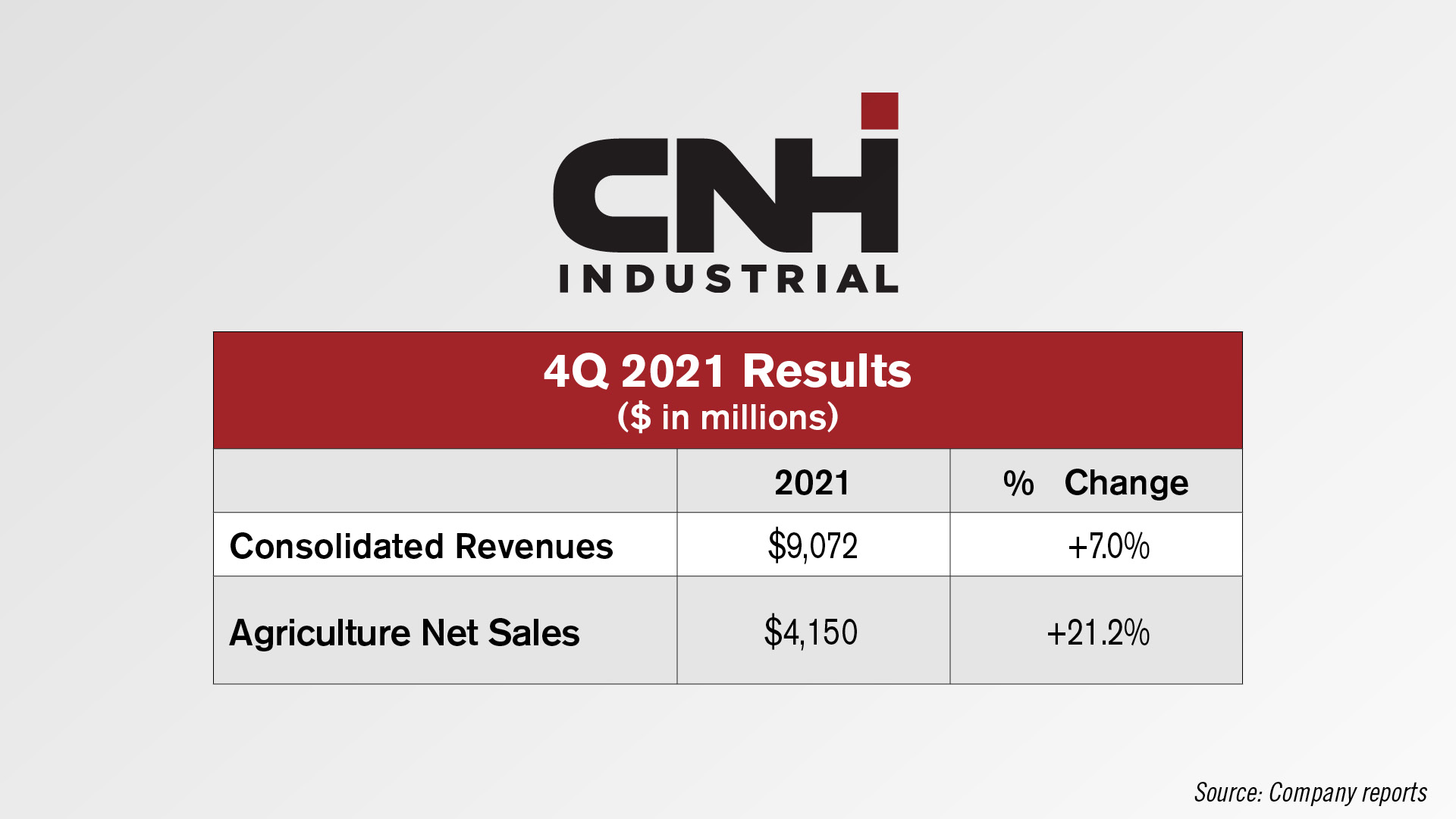 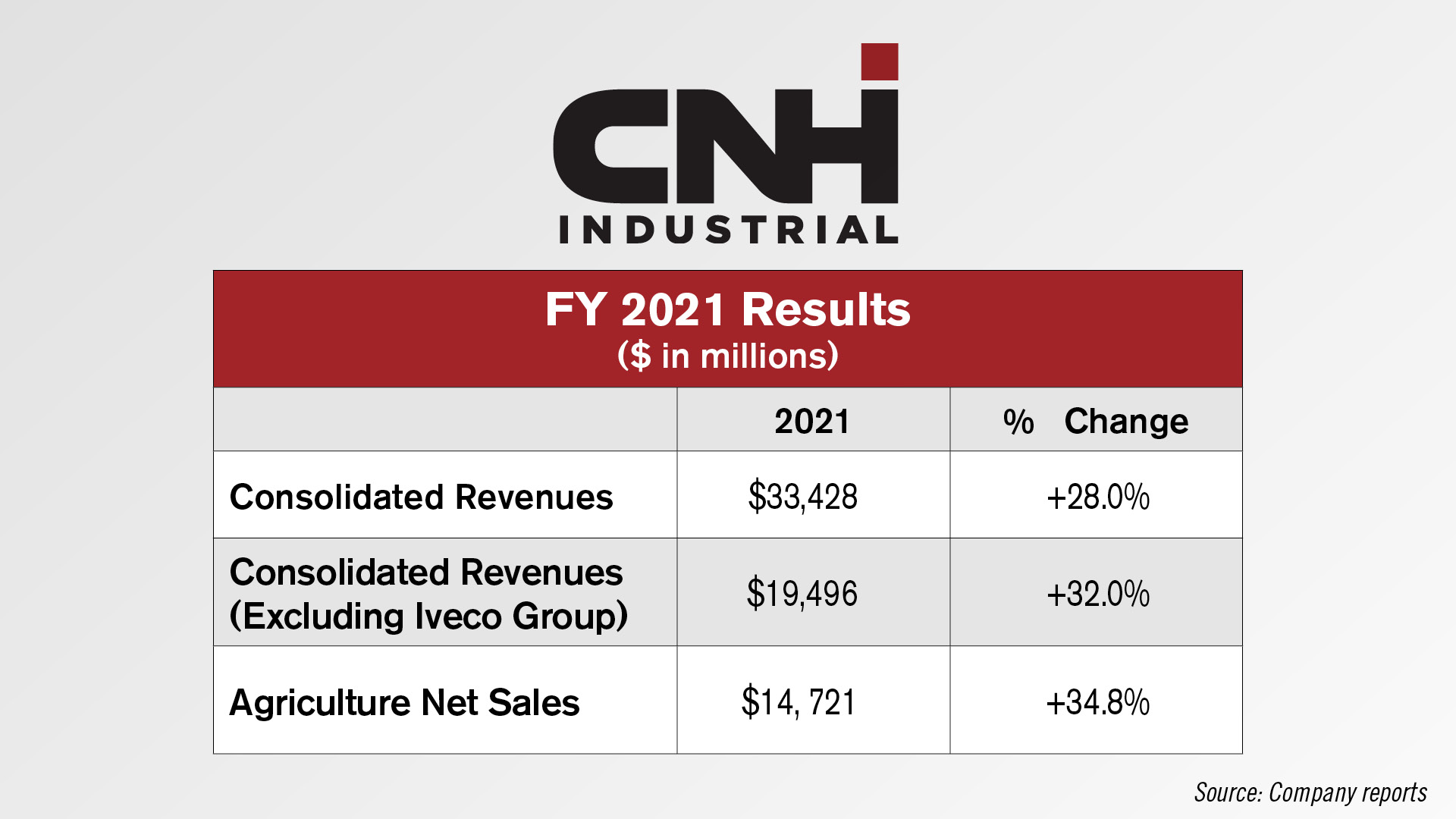 Looking ahead to 2022, during the earnings call CEO Scott Wine said backlogs remain high as order books across OEMS have increased. He says both Case IH and New Holland order books are up year-over-year by more than two times for tractors and 1.5 times for combines.  He says the backlog now extends “far into 2022,” with some equipment essentially sold out for the year at current production rates.