In this episode, we take a look at what Case IH dealers are saying about the UAW strike at CNH Industrial's Racine, Wis., and Burlington, Iowa, plants. In the Technology Corner Michaela Paukner visits with Sam Christianson from Titan Machinery about their partnership with Augmenta Systems. Also in this episode CNH and AGCO report sales growth in the first quarter and our Dealer Optimism Index hits its 9th month in a row with a negative reading.

United Auto Workers employees at two of CNH Industrials plants went on strike on May 2 after CNH Industrial and UAW failed to reach an agreement on the labor contract that expired on April 30. The strike impacts 1,000 workers at the Racine, Wis., and Burlington, Iowa, plants.

In a phone interview, UAW local 807 President Nick Guernsey said he told his members to expect to be out of work for 3-6 months. 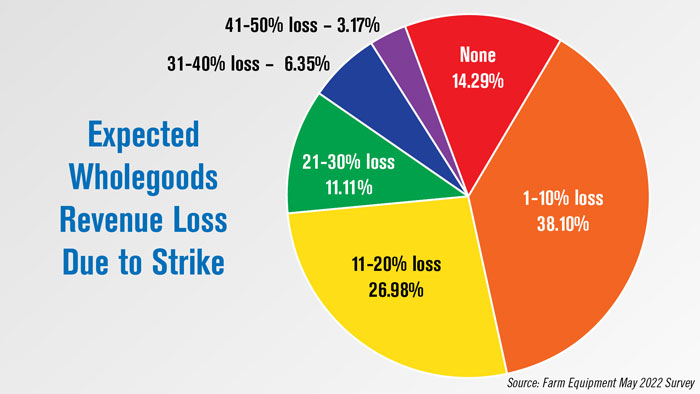 Survey results show just over 38% of Case IH dealers expect to see a 1-10% loss in wholegoods sales if the strike lasts more than 30 days. Another nearly 27% percent expect losses of 11-20%.

While most Case IH dealers said they did not increase equipment and/or parts orders leading up to the strike, about 32% said they did increase their orders as a contingency measure.

"The union's decision to strike was disappointing," said Wine. "We had several weeks of constructive dialogue, but when the contract expired, we remained very far apart on some important issues. The very nature and purpose of a strike is to disrupt our business and create concern amongst our customers. Despite that intent, CNH Industrial is committed to reaching an agreement with United Auto Workers."

Wine stated the company intended to continue operations through a contingency plan "that should minimize the impact on our operations."

On May 3, the day after the strike was called, CNH Industrial reported first quarter revenues of $4.6 billion, up 13% year-over-year, mainly due to favorable price realization. Ag segment net sales were up 11% to $3.4 billion, driven by sales in North America and South America.

This week’s Dealers on the Move include Hutson Inc. and Torgerson’s.

Titan Machinery has more than 100 locations in the U.S. and Europe, but the partnership will give farmers in the Midwest in particular access to Augmenta’s VRA control device.

The device uses a stereo camera mounted on the cab of the sprayer or tractor to scan approximately 60 feet in front of the equipment. The system then autonomously optimizes inputs in real time according to actual need.

The Augmenta system works on any brand of sprayer as long as it has an ISO monitor, and that’s a big benefit for Titan Machinery, according to Sam Christianson, the dealership’s director of precision and machine control systems. He says it allows the dealership to broaden its customer base, and the product itself has good margins.

He also liked that the install time for the Augmenta device is short and its service requirements are minimal. Titan specialists will troubleshoot software if a customer has an issue, but if the problem is beyond their knowledge or it’s a hardware issue, then Augmenta will handle support.

Titan Machinery has partnered with other agtech companies in the past, including Farmers Edge and AgriSync. Christianson says the dealership is making sure it has the technology that customers want.

CNH Industrial owns a minority stake in Augmenta. Christianson says while this didn’t drive his decision to partner with Augmenta, it is an additional benefit to know the dealership is aligned with CNH’s strategic priorities.

On May 3, AGCO reported its first quarter earnings. Net sales for the quarter were $2.7 billion, up nearly 13% vs. the first quarter of 2021. 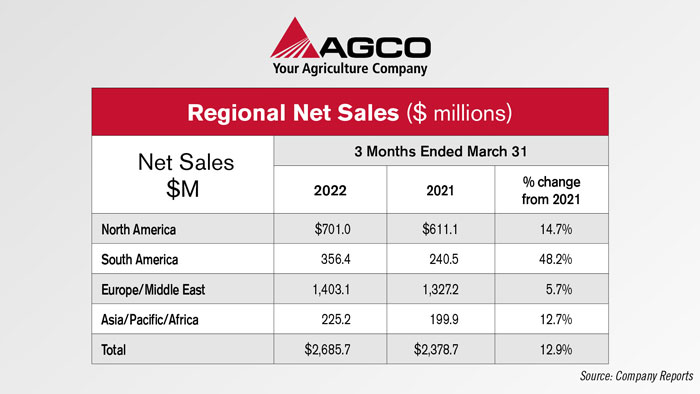 Looking at the regional breakdown, all regions saw year-over-year sales growth, excluding negative currency translations. In North America, net sales for the quarter were $701 million, up 14.7% from the same period last year. South American net sales for the first quarter were $356.4 million, a 48.2% increase over the first quarter of 2021. In the Europe/Middle East region, net sales were up 5.7% to $1.4 billion. And, Asia/Pacific/Africa net sales grew 12.7% to $225.2 million. 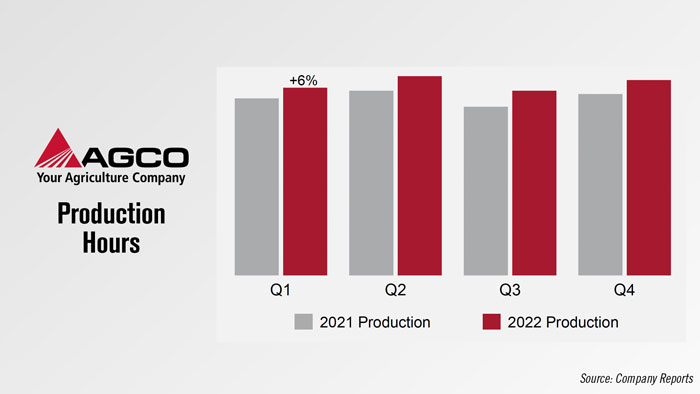 CEO and chairman Eric Hansotia said during the earnings call that AGCO continues to face supply chain and logistics challenges, as well as material and freight costs inflation.

“The supply chain issues have impacted our ability to produce and ship units as well as contributed to labor inefficiencies. In addition, the volatile supply chain environment is still requiring us to keep higher than normal levels of raw material and work in process inventory on hand. We’re facing supplier bottlenecks and delays in all regions, and expect significant challenges in the quarters ahead, as we work to meet expected increases in end market demand.”

As of the end of the first quarter, AGCO’s order board remained extended. Orders for tractors and combines were significantly higher in North America and Europe and were down modestly in South America compared to a year ago, Hansotia said.

Dealer Sentiment Down for 9th Month in a Row

Thanks, Kim. According to our latest Dealer Sentiment & Business Conditions Update, net dealer sentiment came in at –23% in March, with just 12% of dealers reporting they were more optimistic compared to the previous month. 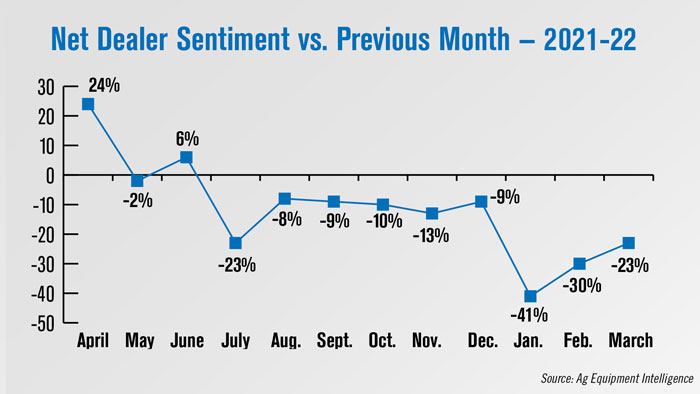 March marked the ninth month in a row that dealer sentiment was down month-over-month, with the last positive reading occurring in June 2021. Decreases in both new and used inventories, delayed deliveries, inflation and elevated farmer input costs were noted factors in decreasing sentiment.

Commentary from dealers also noted fuel price increases, politics and the war in Ukraine were impacting optimism. One dealer noted a growing difficult in selling to their customers as prices increase, saying, “Our customers are still interested in buying, but it is getting harder to sell the big price increases. We think this will become a bigger issue the further we get into the year.” 25% of Dealers Don't Expect Inventory Correction for Over 2 Years