In this week's episode we take a look at CNH Industrial's third quarter results and how they have adjusted their 4Q outlook amid component availability issues. In the Technology Corner, Michaele Paukner explores new AI technology being used for weed control from Carbon Robotics. Also in this episode, an update on the Deere strike and how it is impacting dealer revenue, how McFarlane Manufacturing is battling workforce and supply challenges and an update on Monarch Tractor's licensing agreement with CNH Industrial.

CNH Industrial reported its third quarter net sales came in at $7.5 billion, aa 23% year-over-year improvement. Agriculture net sales were up 31% to $3.6 billion in the third quarter, compared to $2.7 billion during the same period last year. 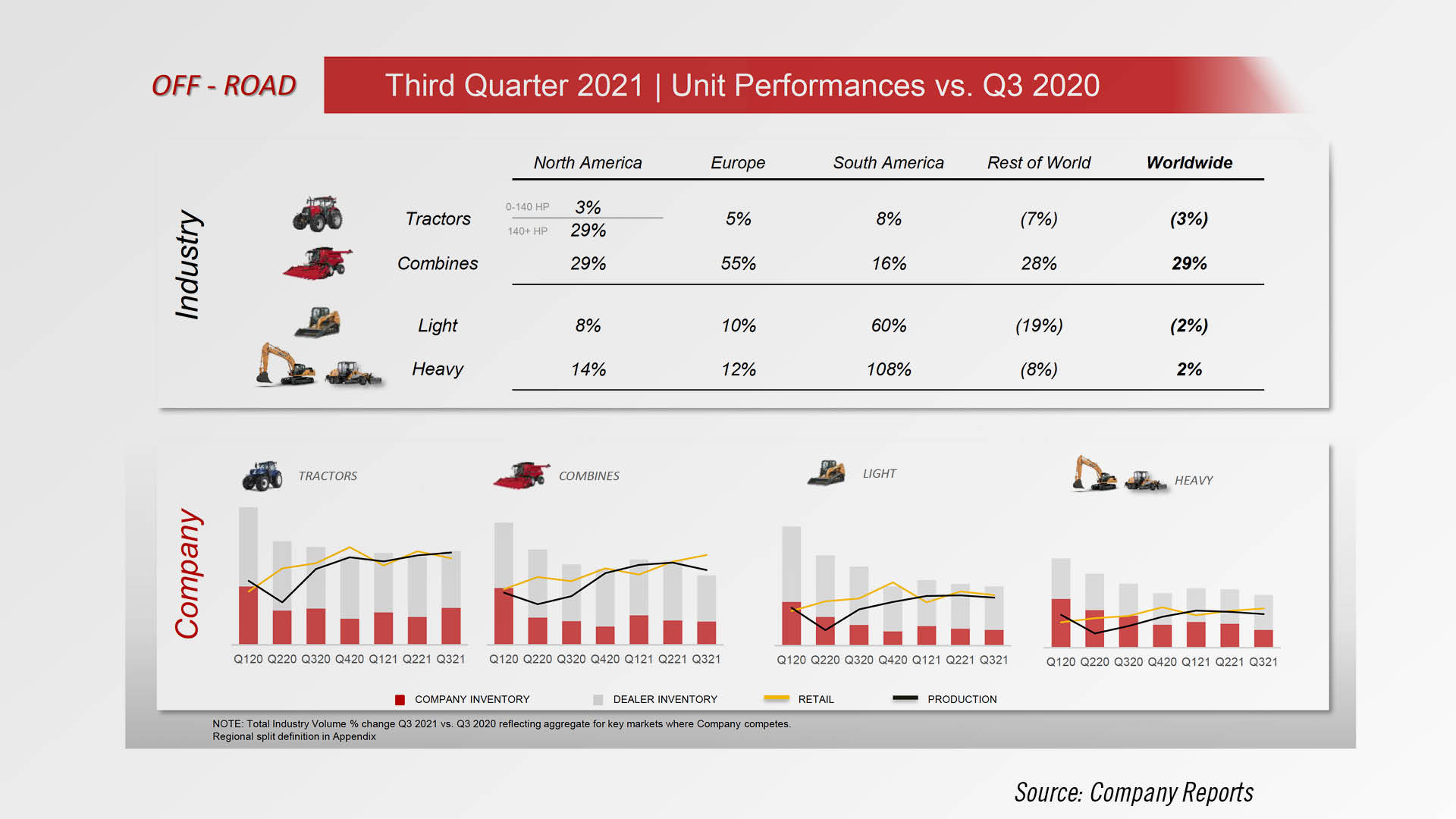 Looking ahead, CNH CEO Scott Wine says that while demand remains robust, CNH is reducing its fourth quarter outlook due to worsening component availability issues that are impacting a number of CNH product lines. However, he says they are “ aggressively working to mitigate the situation and expect improvements throughout the quarter and limited impact on 2022.”

That said, Wine goes on to say, “With solid ag fundamentals, promising infrastructure initiatives, historically low channel inventory levels and aging fleets, we are confident that our market’s cyclical momentum will continue well into next year.”

This week’s Dealers on the Move are AgriVision Equipment and PrairieLand Partners. The two John Deere dealers recently announced they are entering into a joint venture, effective Jan. 3, 2022, pending approval from Deere & Co.

Both AgriVision Equipment and PrairieLand Partners will continue to operate under their current brands and customers will continue to work with the same people at their local dealerships. PrairieLand operates 15 dealerships in central and southeast Kansas. AgriVision has 17 stores in southwest and south-central Iowa, northwest Missouri and southeast Nebraska.

One of the newest developments in weed control is the Autonomous LaserWeeder, a robot that uses artificial intelligence and lasers to zap weeds growing among cash crops. 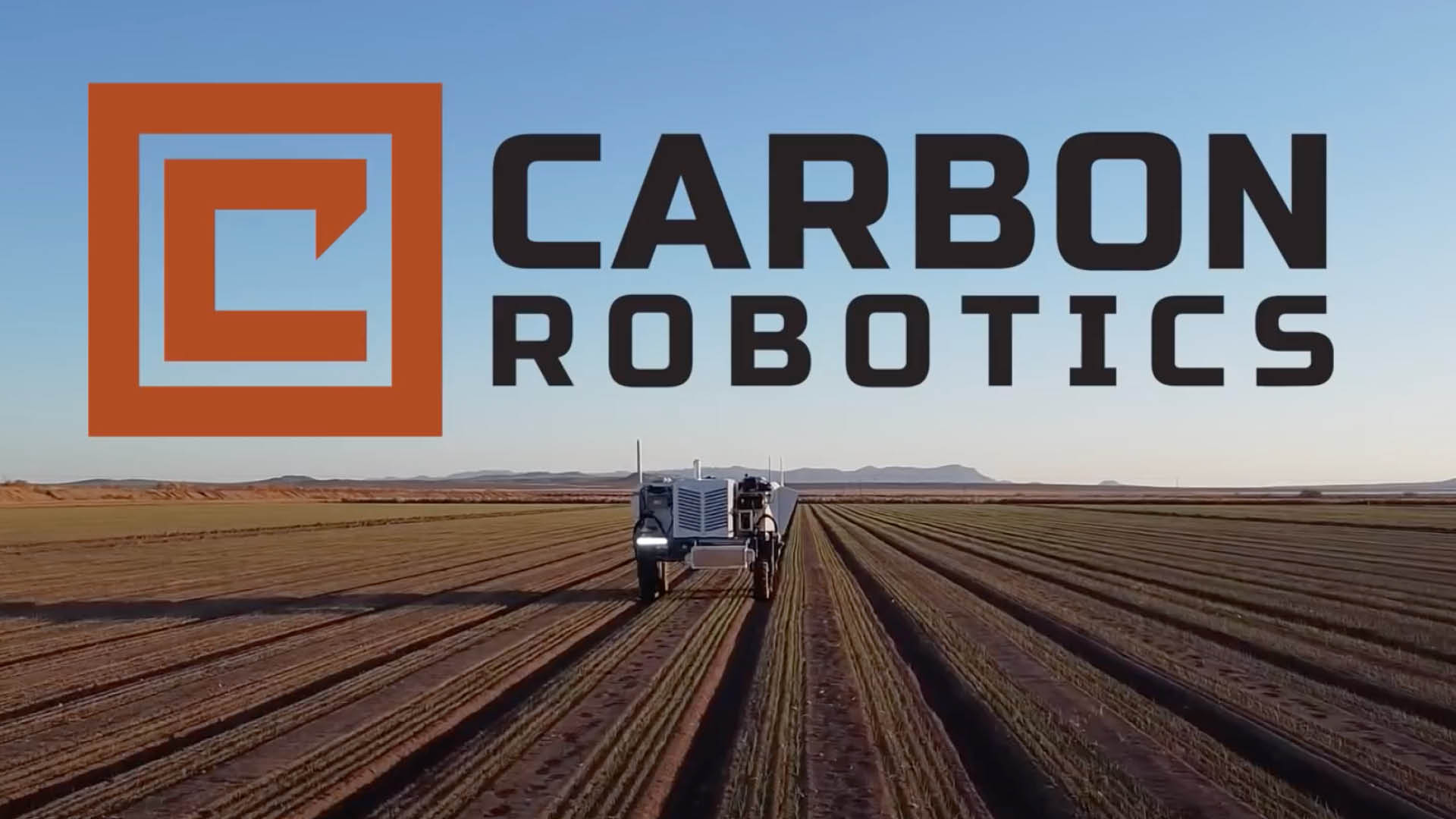 The LaserWeeder is a self-driving 80-inch wide machine that has a row of high-powered CO2 lasers that are targeted and controlled by high-resolution cameras. The cameras scan the field as the machine moves, and Carbon Robotics’ computer vision system uses AI to discern if the camera is seeing a crop or a weed.

If it’s a weed, the laser fires and explodes the plant cells, leaving the dead organic matter on the field to absorb back into the soil. The LaserWeeder can cover 15 to 20 acres per day, running at about 5 miles an hour on a 75-gallon diesel fuel tank.

The LaserWeeder kills about 88% of weeds and hits about 1% of crops.

Paul Mikesell, the CEO and founder of Carbon Robotics, says as the machines are deployed more and scan more images, the accuracy rate will improve as the computer continues to learn what’s a weed and what’s a crop.

Mikesell believes the LaserWeeder is a practical way to bring AI onto the farm with a great return on investment.

“With our system, you can get rid of all of your herbicides if you want to. Some folks will do a sort of a pre burndown before they plant or before the crops emerge, and then they'll bring us in once the crops start going, and then no herbicides from that point on. When you say how much am I saving on my weed control bills, just that cost difference alone, the machine pays for itself between 1 ½  to 3 years.”

Carbon Robotics is currently selling directly to farmers growing specialty crops like spinach, onions and sweet potatoes — with plans to expand its market, production and technology.

In September, Carbon Robotics announced that it secured $27 million in Series B financing. It intends to use the funding to scale production of the company’s products and establish regional sales and support for customers, among other things.

The September announcement also included an interesting comment from the managing director of one of the investment companies. In his view, Carbon Robotics has quote “the potential to be this millennium’s Deere and Company.” end quote.

To hear more about the LaserWeeder and the future of Carbon Robotics, we have an extended interview with Paul Mikesell in the November 12th episode of the Precision Farming Dealer podcast.

Between labor shortages and supply chain backlogs, keeping up with customer demand has been a challenge for farm equipment manufacturers. Shortline manufacturer McFarlane Manufacturing is taking a proactive approach to finding a lasting solution for the ongoing challenges.

We caught up with Todd Lassanske, McFarlane general manager, during the Farm Equipment Manufacturer Association’s Marketing & Distribution Convention in Oklahoma City. The company has launched a project it refers to as Automation, Design & Outsourcing.  Recognizing that recruiting couldn’t take bare the full load, the product development managers are leading the effort. He says it’s a 3-pronged initiative that brings together, technology, design and staffing.

So that's one element, but also reaching out to local suppliers, because while we're busy and while the general industry is busy, there are people out there that aren't. So, we're doing a fair amount of outsourcing or attempting to do more and more outsourcing to basically get more labor at the table.

And then we’ve also got to look at our designs. You could say that maybe we were a little fat and loose on our designs. Mainly because it was more about getting that new innovation, that new product to the market fast … We'd rather get it to the market sooner. So we are revisiting that too.”

Lassanske says their main focus right now is on welding because finding skilled welders is particularly challenging. And while you still need someone who understands welding, the robotic welding equipment does provide the opportunity for older employees to extend their careers because it is less physically demanding.

A Nov. 3 press release from UAW stated that, by a vote of 45% yes to 55% no, UAW John Deere members voted down a second tentative agreement with Deere on the evening of Nov. 2. The rejection has prompted Deere to end negotiations, with Deere Chief Administrative Officer Marc Howze stating in a Bloomberg report that it was Deere’s “best and final offer.”

As the strike wages on at Deere factories across the U.S., a recent anonymous survey of John Deere dealers from Ag Equipment Intelligence found that 80% of Deere dealers had reported lost revenue due to the strike. 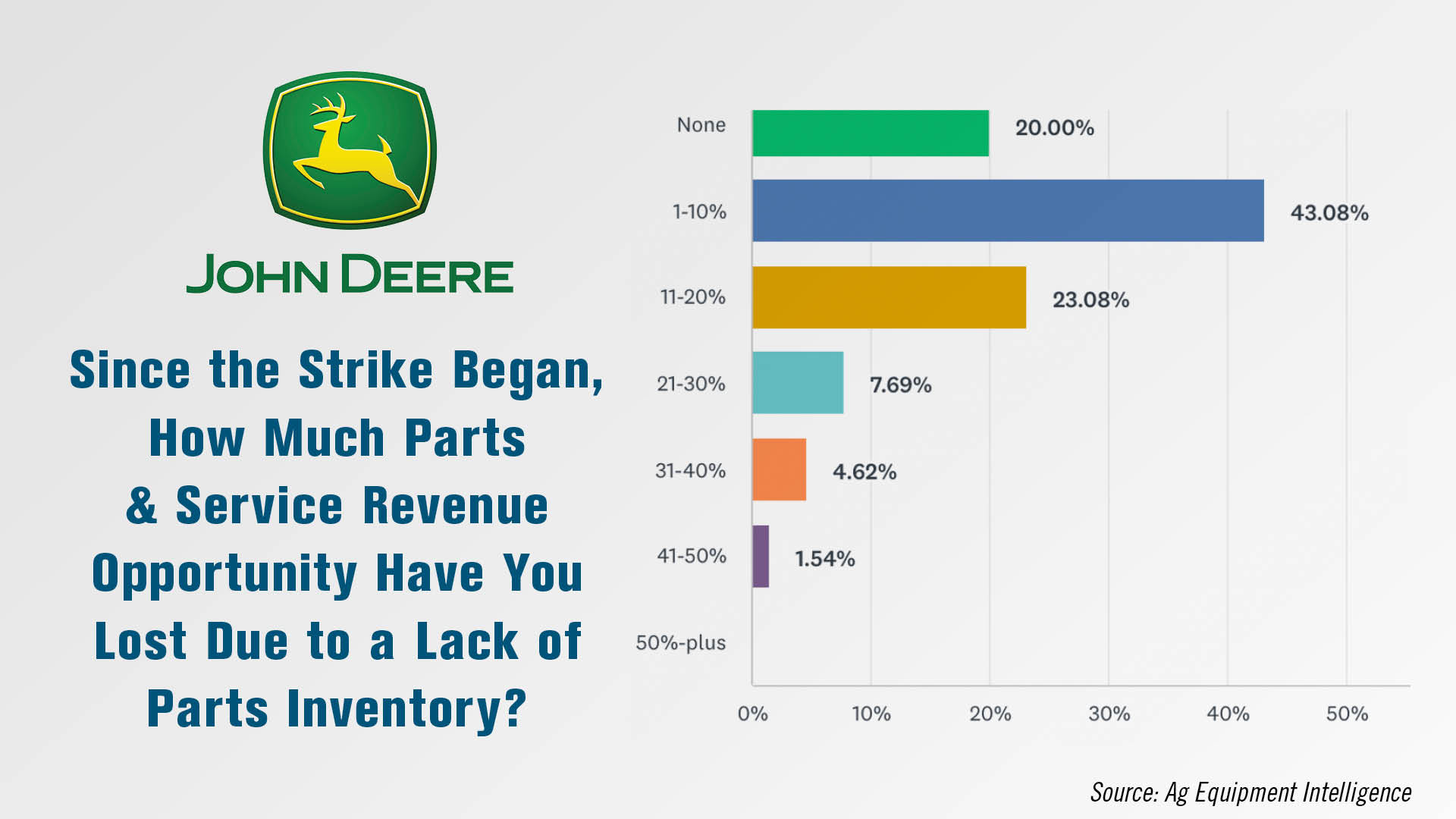 Some 43% of Deere dealers reported a parts and service revenue loss of 1-10% due to a lack of inventory, with another 23% reporting a loss of 11-20%. One dealer on the survey stated that, “In an already tight supply chain, the biggest impact thus far is the compounding of wholegoods orders in 2021 being pushed back directly due to strike impacts.” 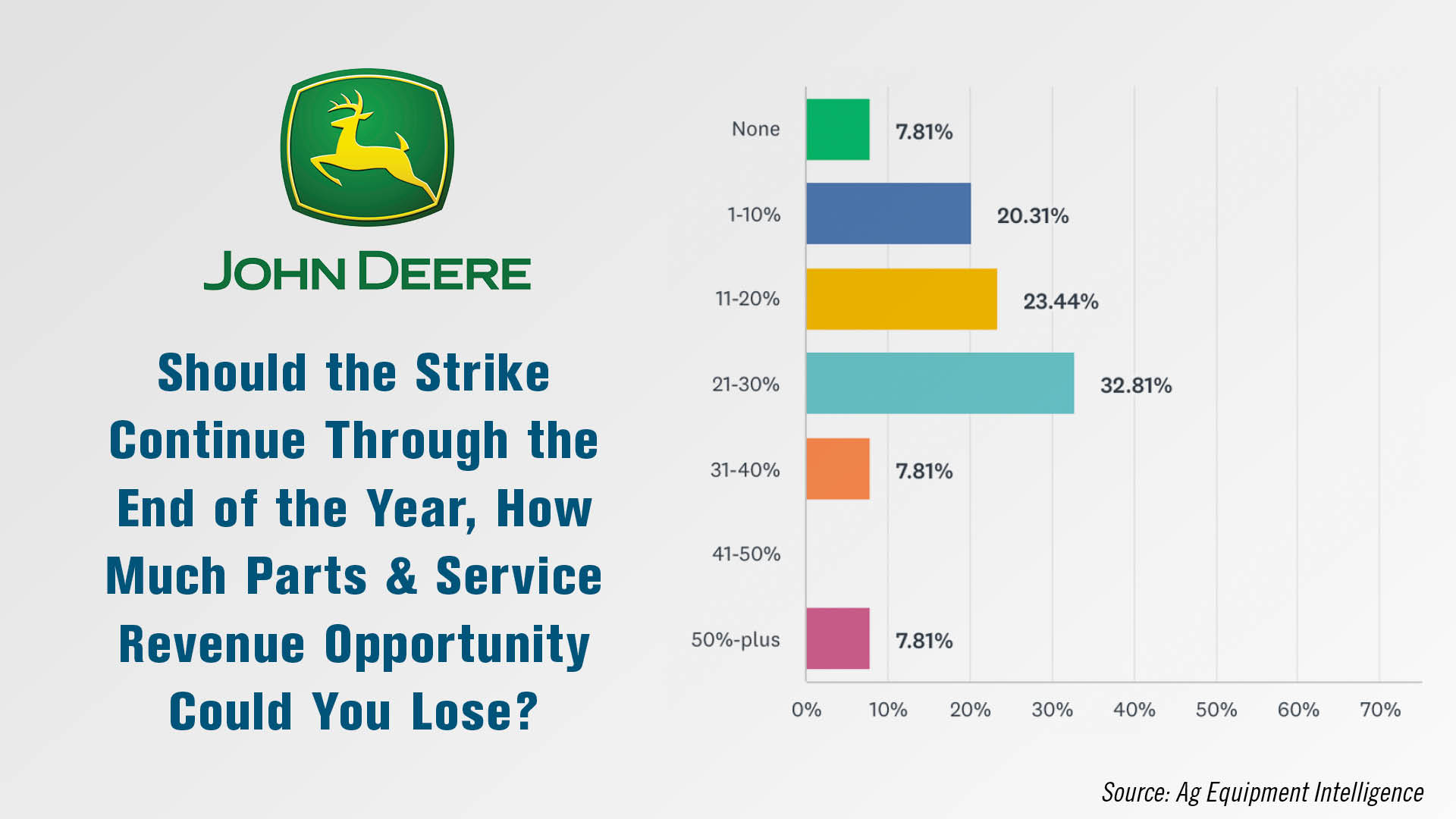 When asked how they thought their aftermarket revenues might be impacted if the strike should continue through the end of the year, around 92% of Deere forecast a decline of at least 1%, with 33% forecasting a decline of 21-30%. Around 8% forecast decline of 50% or more.

Commentary from dealers showed that, while many dealers supported Deere in not returning to negotiations, some felt Deere could afford to upgrade the contract. One Deere dealer stated, “I am not a supporter of the UAW but in this case, I think that Deere should agree with their demands. The company can easily afford to pay for the new labor agreement.”

One John Deere dealer in particular brought up dealers themselves needing to increase wages, saying, “[Deere should] share some of the wealth. We have had to do that to keep our employees over the last few years. Not sure how us dealers are going to fare through this if the strike doesn't soon come to an end. [There could be] loss of income and employees.”

CNH Industrial recently announced an exclusive licensing agreement with autonomous tractor manufacturer Monarch Tractor regarding its electrification technology. This follows CNHI’s minority investment in Monarch that was announced in March of this year.

In an interview, Monarch Tractor CEO Praveen Penmetsa said the agreement gives Monarch access to CNH Industrial’s supply chain and distribution channels to help scale its product. And as Monarch grows, Penmetsa says interest in its product from outside its core specialty crop sector is growing, including in the municipal sector.

“That's an area of interest for us, for sure. Because again, with some of the mandates from the state and also some of the federal agencies and even some of the local agencies, at a city level and council level, they're all mandating now the shift away from diesel-powered, high emissions equipment. So what that means then is it places Monarch and Monarch Tractor in pole position for consideration for those contracts to move forward with.

“So the agencies are also, to answer your question, Ben, the federal, state and local agencies are also trying to provide incentives to help with that transition. So there is help coming, except we are going through a rough patch as we start to make this transition from a diesel  fueled economy to a much more sustainable economy.”

He adds that Monarch has also seen growing international interest in its pilot programs, particularly in South America, Australia and New Zealand, though its primary focus for now will remain the specialty crops market in California, Oregon and Washington.