Under 40 Horsepower Tractors — The erratic behavior of the stock market impacted the sales of these smaller units in April with the actual number of retail sales falling below our forecasted amount for the month. Year-to-date our forecast is 1.7% above the actual retail number. 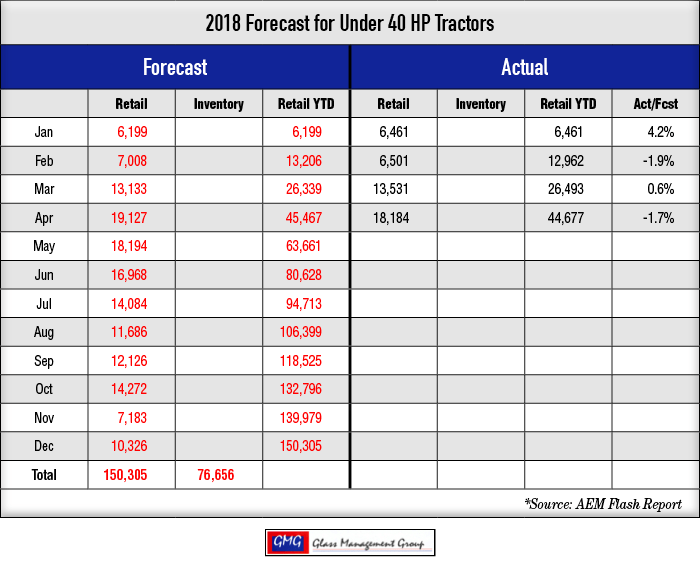 40 to 99 Horsepower Tractors — This segment is swimming against the current and posted very strong retail sales for April. Year-to-date the actual retail sales are 2.9% above our forecast. 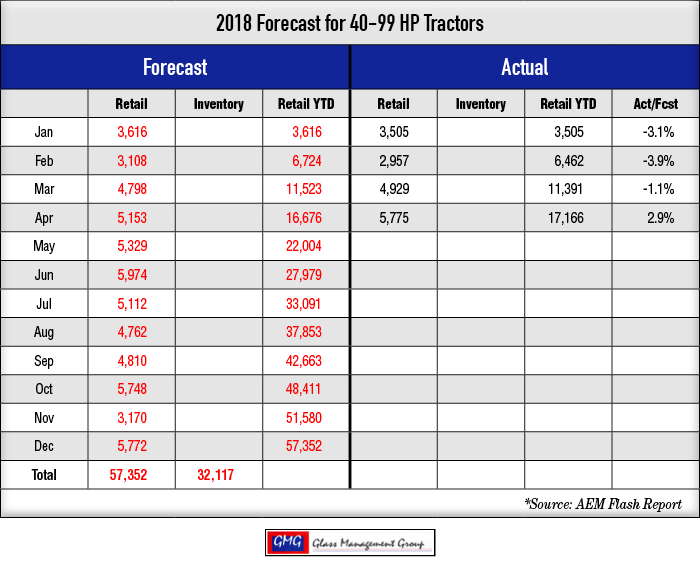 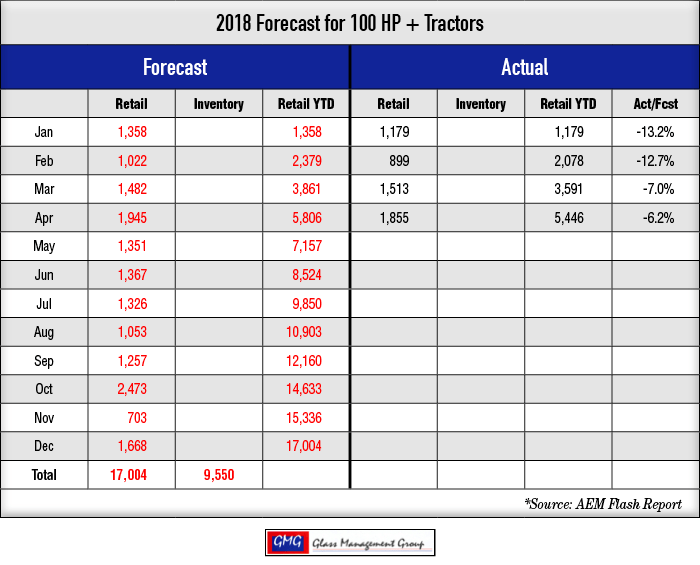 4 WD Tractors — The April actual retail sales came in 10 units below our monthly forecast and is 61 units or 7.9% below our year-to-date forecast, but the total is improving each month and should be at forecast levels by year-end. 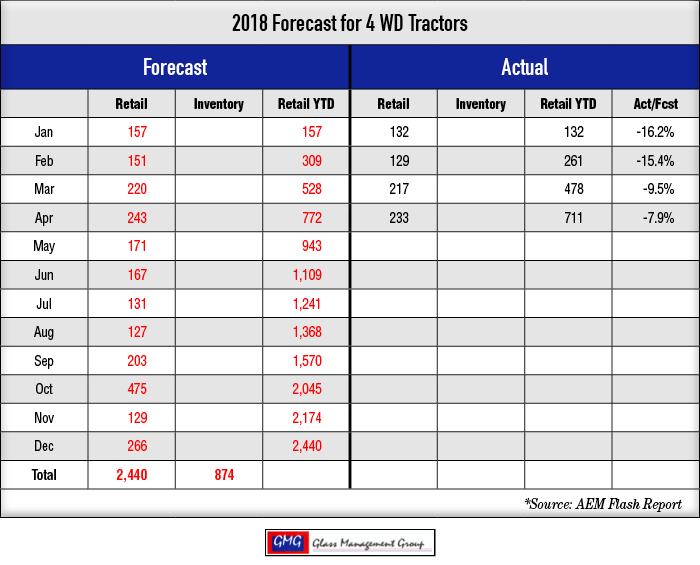 Combines — Somebody forgot to mention the tariffs placed on grains going to China since this segment saw a huge leap in retail activity, surpassing our monthly forecast by about 84%. The year-to-date results is a whopping 19% above our year-to-date forecast. 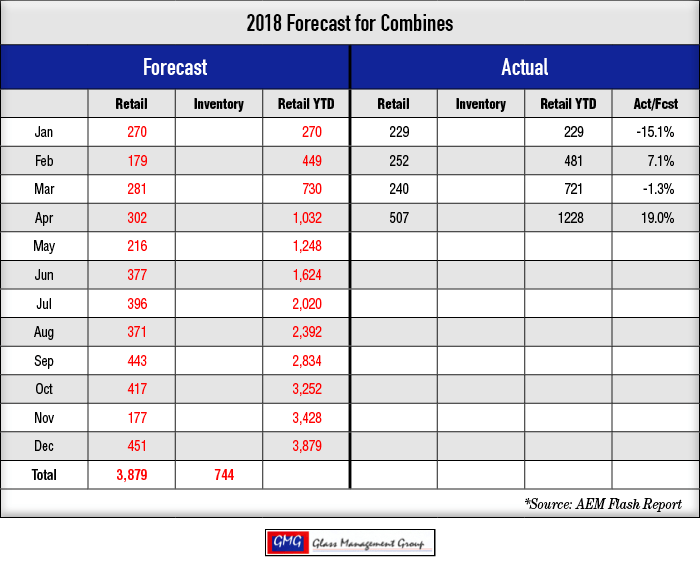 A Funny Thing Happened on the Way to the Trade War

Panic persisted for producers of soybeans with the announcement from China that they were imposing an additional 25% tariff on the U.S. crop. China is the largest purchaser of U.S. soybeans and their withdrawal from the market could spell disaster for the agricultural economy this year.

Soybean prices declined slightly from the March levels, making the U.S. crop more attractive to other international buyers. Customers such as the EU and Argentina have increased their purchasing activity causing the flow of soybeans from the U.S. to change directions. Brazil, the number two producer in the world behind the U.S., is the major beneficiary and prices at their ports have been increasing as the demand increased. There are some reports that prices at their northern ports were as high as $12 per bushel at the end of April with the average price premium reaching $1.50 above the CBOE quotes. This leaves ample room for other countries to serve as the middleman in supplying China with U.S. produced grain.

Argentina, another large producer of soybeans, has been in the midst of a prolonged drought and their crop has been significantly reduced this year. As the dry conditions persist the prospects for a normal crop next year seems unlikely. Their domestic demand for soybeans will most likely consume the majority of their current crop. Argentina recently purchased 240,000 tons of soybeans from the U.S., their largest purchase in over 20 years.

All of this pointed to a higher price that China will pay for their soybeans in the 201-18 marketing year as their need for soybeans continue to increase annually. China also imposed a 175%+ tariff on grain sorghum, placing many of their domestic purchasers in a bit of a dilemma.  There were ships loaded with U.S. sorghum on the water at the time of the announcement and those purchases were already consummated. The Chinese buyers petitioned the government to exempt those purchases from the new tariff with no success, causing them to scramble to sell the grain to other countries, often at a loss.

There was no real expectation that 2018 was going to be a banner year in equipment sales and the China affair certainly has placed a black cloud over that expectation. The real impact comes from the psychological mindset of U.S. farmers and ranchers. They began the year with a rather positive outlook given a strong general economy in the country and the reasonable expectation that it would eventually lead to a stronger ag economy. The realization of an old fashioned trade war looming has tempered the general economy, the agricultural economy and the stock markets within the country causing the usually conservative agricultural producers to become even more protective of their assets.

Our view of April’s activities is that it is one of a short duration, probably 6-12 months, and our models continue to suggest that 2018 will unfold very much as our original forecast indicated.

Corn — Prices closed up slightly over the March close and seem to be inching closer to profitability for farmers. Mexico was the largest purchaser during the last week of April with Japan being a close second.

Soybeans — With all the turmoil within the markets, soybean prices held up rather well.

China’s need for agricultural imports remains significant since they are faced with providing food for nearly one-third of the world’s population. The past decade has produced a growing middle class in China that has demonstrated an increased demand for not only basic foods, but also for high quality products that are only available from other parts of the world. China’s agricultural economy is dominated by subsistence farmers who produce food enough to provide for their family and the excess is typically sold through the local farmers’ market.

The past decade has seen China develop an aggressive investment program in other countries to provide a measure of food security for their population.  The majority of these investments, approximately 51%, has been made in other Asian countries, but has not been limited to that region. Japan remains an important, active seller of grains into the Chinese economy, which they primarily purchase from the U.S.

Approximately 15% of their foreign agricultural investments have been placed in the EU and have been focused upon grain purchasing and distribution companies. Investments in Australia and New Zealand have been in the beef and sheep production areas in order to help insure a steady supply of protein in the future.

The most visible purchase in the U.S. was the purchase of Smithfield Foods. Chinese investment in U.S. agricultural companies represents only about 2% of their total international agricultural investments and will most likely be closely watched by the current administration.

The recent tariffs are just another punch thrown in round 6 of this 15 round Championship Bout. Stay tuned.