Under 40 Horsepower Tractors – The hottest segment of tractors in the US market continues to rocket ahead!  This segment closed 2016 with 132,844 units retailed.  Our original forecast called for 122, 147 units and that is 8.8% above our forecast.  The general economy drives the majority of sales in this segment and it has been moving to the positive side for the past several months providing momentum for these tractors. 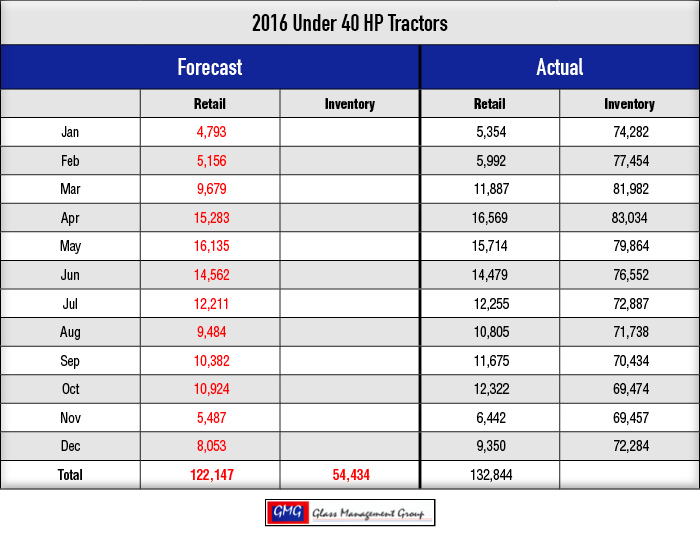 40 – 99 Horsepower Tractors – Our research has shown that the lower horsepower tractors (40 – 60 HP) have been driving this segment all year.  This category finished 2016 with 57,537 units retailed and that is 7.2% below our original forecast of 61,704.  This shortfall appears to have come from production agricultural users who were hammered by the declining agricultural economy this year. 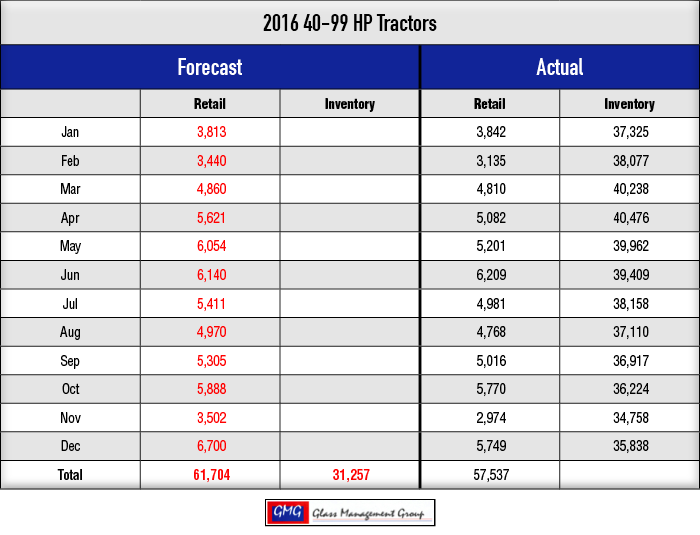 100 + Horsepower Tractors – The agricultural economy certainly drives the purchase of these tractors and it slowed those sales to 18,544 units in 2016 and that was significantly below our original forecast of 23,957 units. 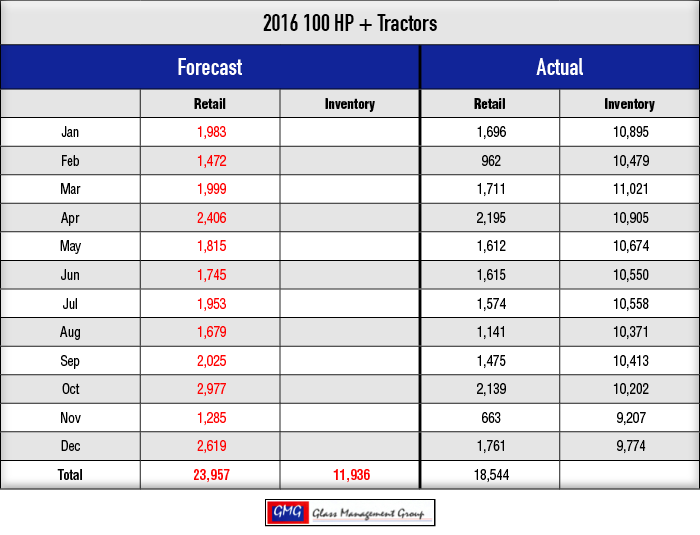 4 WD Tractors – Grain farmers are the principal buyers of these tractors and their income took a significant hit during 2016 and resulted in very weak activity in this segment.  This category closed the year with 2,299 units and that was just 4.8% below our original forecast of 2,414 units. 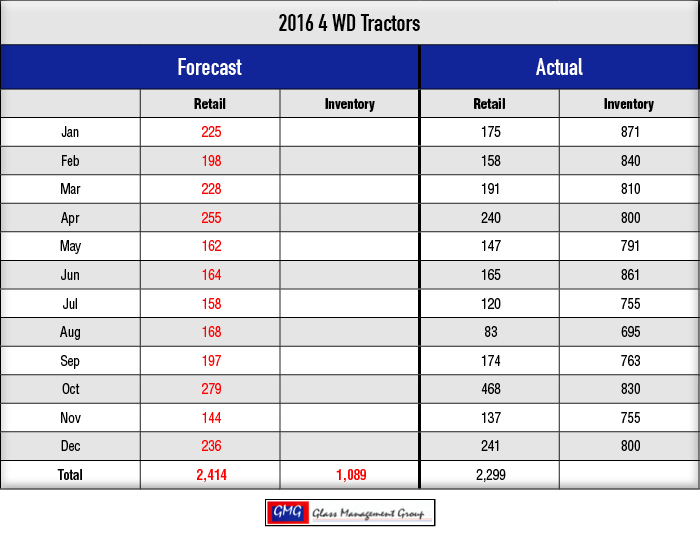 Combines – Low grain prices all year long had a devastating effect upon combine sales with 3,979 units retailed and that was 24% below our original forecast of 5,238 units for 2016. 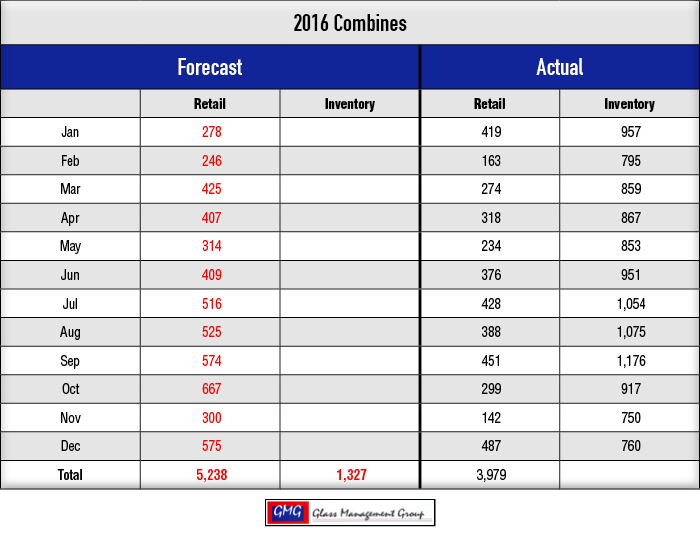 This past year has been one of the most trying years in recent history for farm equipment manufacturers and dealers alike with precipitous declines in the large tractor markets and the combine market.  If you were in an area where small horsepower tractors dominate, you have a bit of a smile on your face as this year draws to a close.

The prevailing question is; “Is this the bottom of this decline or are we still on that steep, slippery slope?”

Our forecasting models have shown that Net Farm Income is a solid barometer for the health of the following year’s equipment sales and 2016 is destined to become one of the smallest in the 21st century.  Since the value of real estate, which has been falling for the past several years, is reducing farmers’ net worth, securing a loan at the local bank is becoming something of a problem of late.  The positive side of this situation is that land rents have fallen along with the current land value and the cost of inputs for producing a crop has also retracted somewhat producing the need for a smaller bank loan.  Over all, many US farmers are in solid financial condition although they are somewhat reluctant to make new major purchases at this time.

As 2017 looms ahead, many of the major tractor manufacturers have announced their forecast for the coming year and most of them are somewhat negative.  Those forecasts will then become production schedules as they work to meet their forecast for the coming year.  Our models indicated that 2017 was going to be slightly better than 2016, especially in the larger tractor categories that fell so hard in 2016.  As the general economy begins to improve with the new administration in Washington, smaller horsepower tractors will continue their ascendancy in this coming year.

The March 2017 corn contract closed at $3.52 per bushel and that was 20 cents higher that the November close but these prices still remain below a profitable margin for producers this year.  The steadily rising strength of the US Dollar also affected export sales opportunities for this commodity this past year.

Soybean January 2017 contract closed at $9.964 in December and remains at a level that will produce a small profit for producers.  The USDA reported that the US and Brazil produced about 80% of the total soybean exports in 2016 but Brazil had endured a drought condition for most of the growing season.  This allowed US producers to fill some of those orders that Brazil was unable to complete in spite of the rising US Dollar.

The demand for soybeans from China continues to support prices for this crop and Rabo Bank suggests that prices will remain above $10.00 this next year due to the Chinese demand.

As we look forward to the coming year, there are some indications that there will be a slight improvement in equipment sales.  Any improvement in commodity prices will certainly aid in generating new sales in addition to the normal replacement units that are sold each year.  Field inventory levels are down from year ago levels and with many of the majors pulling back on their production schedules this year that leaves an opportunity for companies such as Kubota and Mahindra to pick up some sales in the larger units should there be the bounce that our models are suggesting.

With the final retail sales and field inventory numbers in from the Assn. of Equipment Manufacturers, following is our final outlook for the 2017. 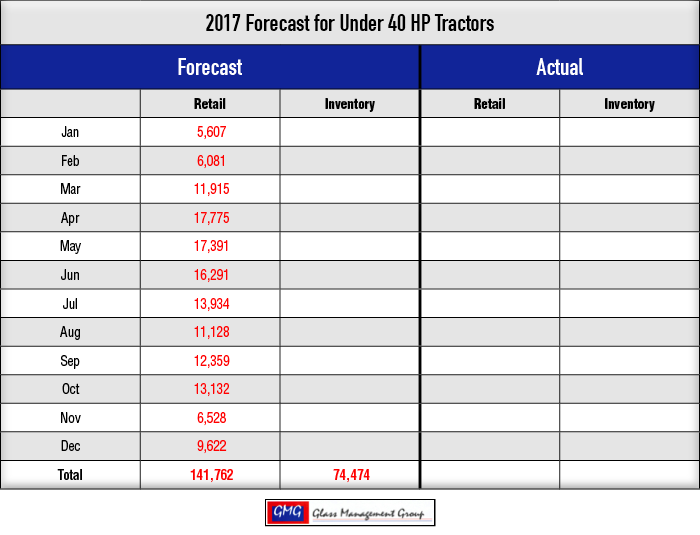 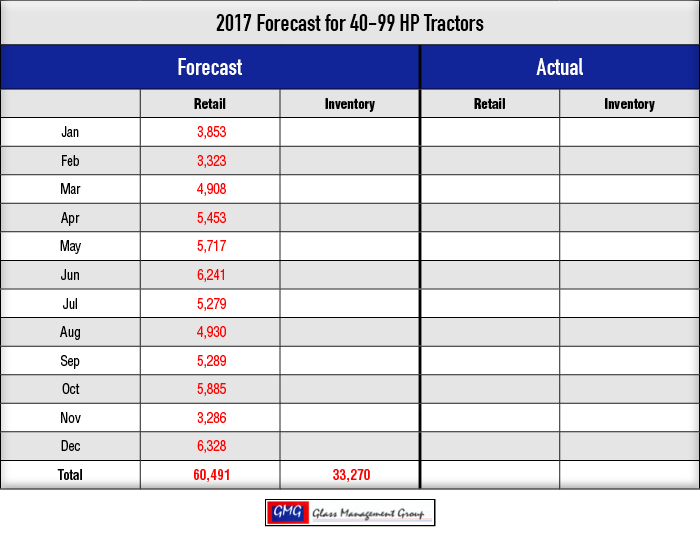 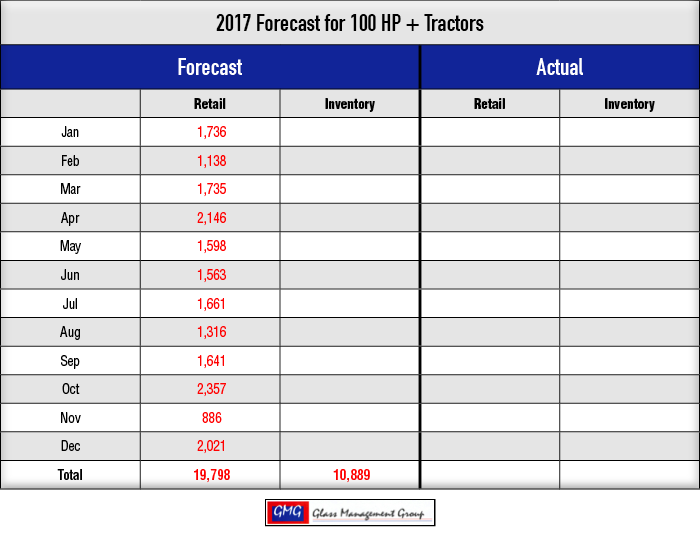 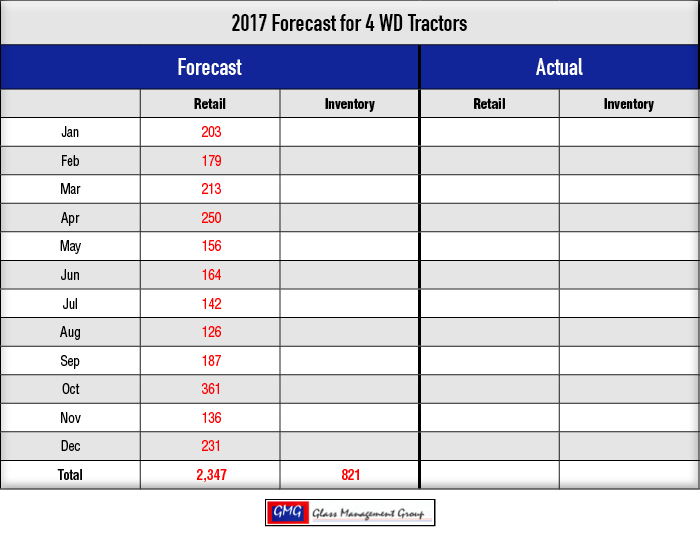 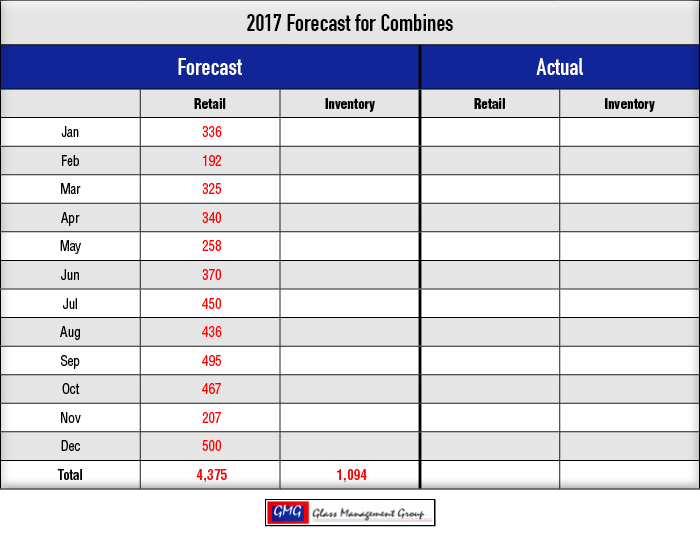