Under 40 Horsepower Tractors — With the President on the job only 3 weeks and the prospects of higher paying jobs returning to the U.S., the general feeling is that the economy is about to flourish once again. This bodes well for this small tractor segment and January’s retail sales numbers of 6,091 units is a spectacular start for the year. It was about 8% above our forecast for the month. 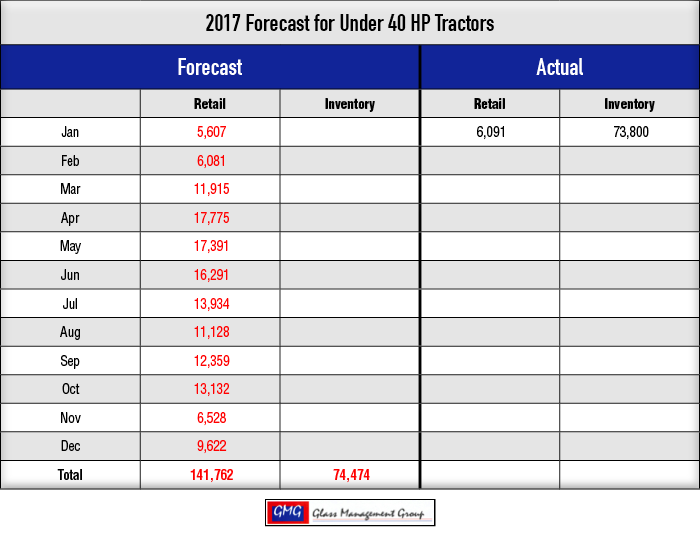 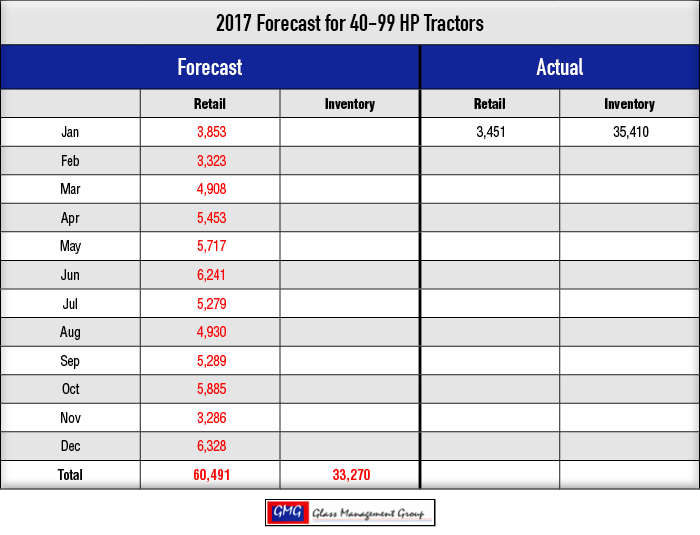 100 + Horsepower Tractors — This segment had a rather weak showing in January with 1,200 units retailed while field inventory fell slightly. 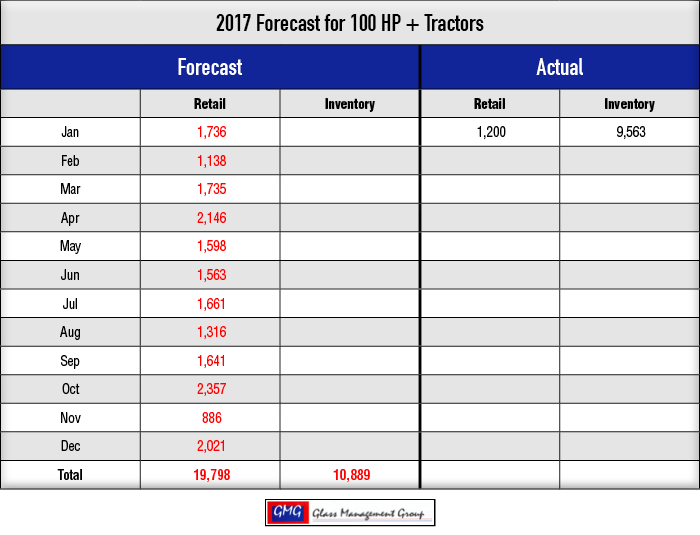 4 WD Tractors — These larger tractors saw an anemic retail number of only 109 units, 74 of which came from field inventory. 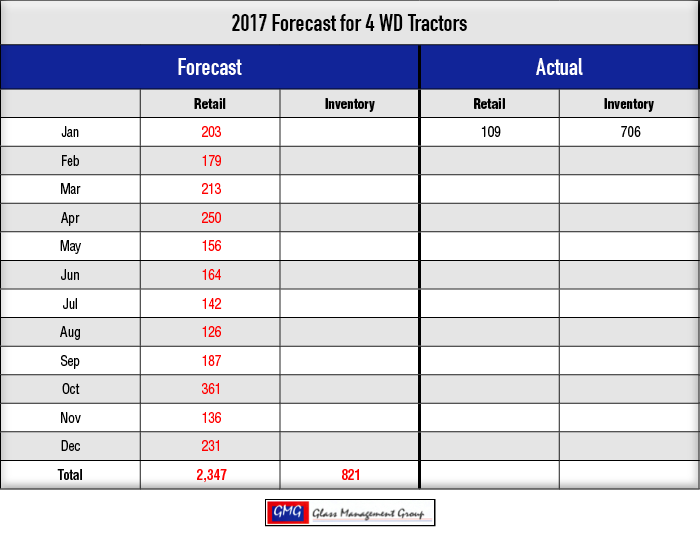 Combines — Dealers retailed less than half the number of combines sold in January 2016 but field inventory levels fell by only 27 units in January. 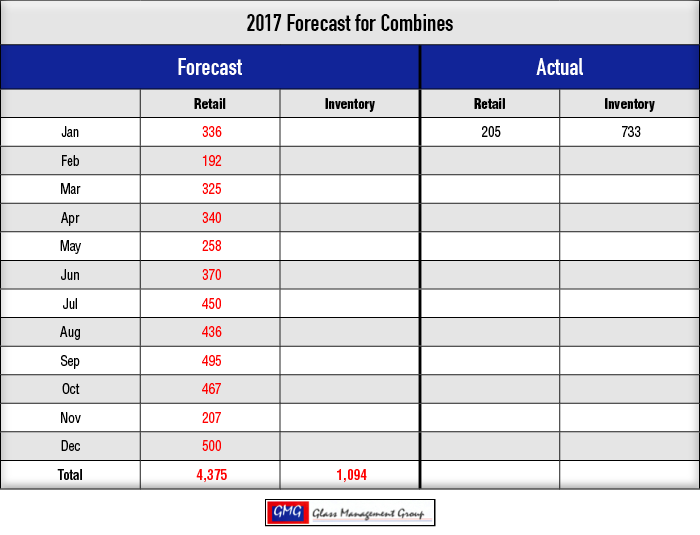 After the release of our 2017 forecast last November, we have received several communications from readers who seem to have the same question; “What planet are you from?” They did not agree with our forecast and, from the looks of things, they might be right!

Our forecasting models have enjoyed a rather successful history — when I don’t tamper with them! These models indicated that 2016 could be the bottom of the current drop in tractor and combine sales and those predictions came from a thorough review of the factors driving these markets. Our net farm Income models show continued weakness through 2017 — 2018 with a relatively flat level as compared to 2016 but begin to rise again in 2019.

The U.S. Department of Agriculture just released their forecast for farm income and it agrees with the objectives that our model has suggested. While income from farm activity will probably remain flat for the next 2 years, annual government payments will remain in the $9 billion range and that will benefit the farmer’s bank accounts. The crop insurance program, which began in 2014, required producers to select the program of their choice and that choice was locked in until 2018 and we will probably see some repositioning in 2019. The Conservation Reserve Program (CRP) will remain relatively steady and those payments are expected to be about $2 billion annually for the next 2 years.

Historically, the peaks and valleys of the farm equipment markets have been in the range of 20% from top to bottom. Normally those changes occur over an extended period, but recent changes have been fast and furious. We anticipate a return to a more normal cycle of the markets as the nation’s economy returns to a more predictable state in the next few years.

Corn prices rose slightly during January and finished the month at $3.63 per bushel, which is $0.11 above the December close. These prices continue to be a problem for corn producers even though their input costs have fallen slightly. Steady growth in worldwide demand continues to build and that should positively impact prices in the months to come. USDA’s crop forecast suggests that the rise in corn production will come from increased yields while the total number of acres planted will decline slightly. With the current inventory increase of petroleum products and weakening fuel prices, ethanol production is leveling off or slightly declining. USDA is anticipating that corn usage in ethanol production will decline by approximately 3% over the next several years but corn products used in food and industrial applications will increase slightly as the demand for those products increase with an improving general economy in the U.S.

Soybean prices closed in January at $10.27 per bushel and that was $0.37 higher than the December close. While soybean acreage has declined from the high in 2007, there still remains more than 80,000,000 acres in production and with prices remaining north of $10 in the near future that will probably move some corn acreage to soybeans. Strong demand from China continues to move this market higher globally and that demand should at least remain level or have a slight growth over the next few years. Brazil, U.S.’s largest competitor, sees an opportunity in the current trade discussion coming from the Trump Administration and expects to fill any orders that might fall victim to trade renegotiation this year.

Growth in both global population and in the median income worldwide will have a modest impact upon commodity prices over the next several years and that will translate into a modest gain in the sales of tractors and combines in the U.S.

While our models are not suggesting a barn-burner of a year in 2017, they do suggest that there will be a slight improvement in those units used in production agriculture and we are sticking to that forecast. The growth of the general economy will most certainly provide growth in the smaller horsepower tractors as the lifestyle farmers begin to see their 401Ks growing once again and higher paying manufacturing jobs begin to emerge in the coming months. These trends were in place before the November elections last year, but having an administration that is supportive of business and free enterprise will certainly help speed up things.