In today’s newscast, we take a look at what sort of impact President-elect Donald Trump and a Republican controlled Congress may have on the ag industry, Kinze’s recent court filing to block Deere from accessing internal documents, Trimble’s consolidation, and the third quarter earnings for Rocky Mountain and Cervus.

At this point, speculation about how U.S. and worldwide agriculture will be impacted by president-elect Donald Trump’s policies is just that — pure speculation.

As noted in a Nov. 14 report from Rabobank, The F&A Sector After the U.S. Election: What to Watch, “Trump’s policies are not clearly defined, but statements made during the campaign suggest they could be very different from current policies. The only certainty in the market at this point is uncertainty.”

One thing is certain, though. The new president won’t be doing things on his own. With the Republican Party dominating the election, including majorities in the Senate and House of Representatives, control is clearly now concentrated in the party that, according to the election results, is favored by much of U.S. agriculture.

As Rabobank points out, in addition to the control of Congress, Republicans also won most of the state offices in the central U.S., “which are heavily agriculturally-oriented.”

In the short term, Rabobank says the lack of market information creates uncertainty, which in turn creates market volatility. The initial uncertainty over Trump’s policy direction resulted in short-term sell-off reaction by markets.

We spoke with Steve Nicholson an analyst with Rabobank about what sort of impact the new administration and a Republican controlled Congress could have on the ag equipment industry and small business like farm equipment dealers.

“My first reaction is to think about the regulatory side and think about all the regulatory things that have come down the pike in the last 8 years and what that’s done. In that we may see some relief or some rolling back of some of those, particularly environmental type regulations that ag equipment dealers had to deal with from fuel standards and all of those sorts of things. I think that would be the first thing I would look for. I think another thing I’m thinking about is a more relaxed regulatory structure but the fact is now that you have republicans and some very conservative republicans when you look at the freedom caucus who think that farm subsidies, crop insurance and stuff like that is not where we ought to be spending our money, you could make an assumption that you could have a smaller safety net for farmers. And as we all know, what’s happened to farm equipment manufacturers right now with what commodity prices are doing and the fact that this is going to be a bit of a long term trend here, that could cause some incomes for farmers to not be quite as good as they have been lately.”

Looking at the over all ag economy, the new administrations policies on trade agreements and labor could also have long-term implications, according to the report.

The U.S. food and ag sector is one of the main drivers of global agriculture and trade and Rabobank says any change to U.S. agricultural trade agreements will not only affect global prices and trade dynamics but also U.S. farmer margins.

The U.S. food and agriculture industry is highly dependent on migrant labor, particularly in sectors such as produce, animal protein and food service operation. If immigration laws are enforced more strictly, business owners may face labor shortages, which would pressure their margins, according to the report.

Each of these, of course, would impact he sales of farm equipment, but its guesswork at this point to try to determine where it’s all going.

Archbold Equipment, a Case IH dealer with stores in Indiana, Michigan and Ohio, acquired Gibbs Equipment in Bellevue, Ohio. The dealership now has a total of 7 locations.

AgPro Equipment Services, a shortline dealer in Hettinger, N.D., has signed on with JCB under the name AgPro JCB.

Now here’s Technology Editor Jack Zemlicka with the latest from the Technology Corner.

“We continue to see some integration struggles for the customers we work with. In general, to get their technology needs met, they are having to put together solutions from multiple vendors, multiple providers and stitch them together on their own. And that technology integration burden continues to be a limiting factor in the adoption of agricultural technology.”

The software consolidation comes on the heels of Trimble expanding its new Vantage distribution network, adding 4 new dealerships, including two in the U.S. Precision Ag Partners, based Arkansas, will become Vantage Midsouth, and Agrinetix, based in New York, will become Vantage Northeast.

According to Allen, there are currently 12 Vantage dealers and the goal is to ultimately expand that network to 120 worldwide.

John Deere’s battle with the Department of Justice over its planned acquisition of Precision Planting from Monsanto has taken another turn. The Des Moines Register reports that attorneys representing Kinze Manufacturing have filed motions asking a federal judge to stop Deere from accessing a wide variety of internal documents about its planting equipment business. These documents include marketing strategies, sales data and research and development plans.

Beverly Flores, a spokesperson for Deere, says the request is part of the legal process and other competitors, such as CNH, have already complied with similar requests. However, Flores could not comment on whether or not Deere received any pushback from CNH about supplying the documents. She also stressed that the documents would remain confidential.

“The court in Chicago has already approved a protective order that preserves that confidentiality and helps ensure that competitive information is only disclosed to certain lawyers. So along those lines, the business and strategy functions would not have access to that information and as you look at that information really comes to the heart of how the market is competitive.”

It should be noted that Kinze has already turned over more than 18,000 pages of less sensitive financial and business documents to the antitrust division and Deere as part of an investigation that was done before the lawsuit was filed.

We reached out to Kinze for this report but they declined to offer any additional comments. 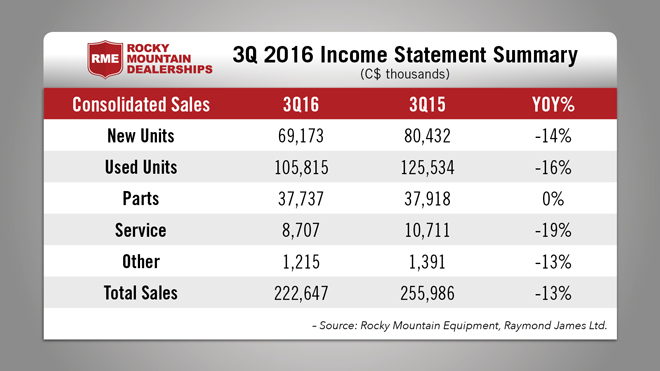 Despite a rough quarter for sales, Rocky reduced its inventory by $49.2 million, or 9.9%, to $445.6 million, the lowest level since 2012. According to Ben Cherniavsky, an analyst with Raymond James, better than expected gross margins also helped offset some of Rocky’s revenue shortfall.

Commenting on the dealership’s performance during the quarter, Cherniavsky said “While its operational turnaround is not 100% complete and some end market headwinds still linger, we have seen enough recent progress on costs, inventories, and the balance sheet to feel better about the company’s future. To use a boxing analogy, we award Rocky a TKO after enduring a long and bloody fight.” 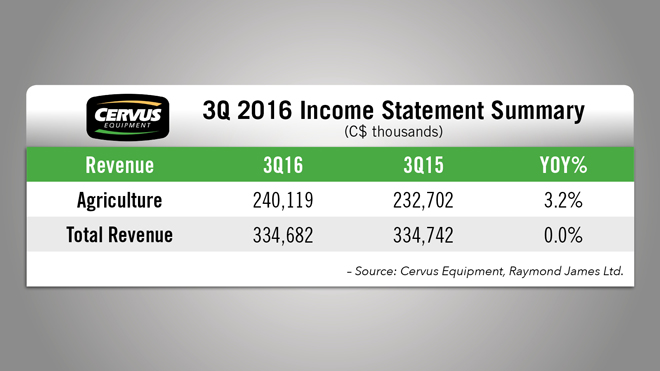 All of the improvement came from Cervus’ ag equipment segment, which rose by 3% during the period, while its transportation business was flat year-over-year and its commercial and industrial sales were down by 26%.

The company was also able to reduce its inventory by $62.7 million, or 18.6%, compared to Sept. 30, 2015. Cherniavsky notes that Cervus’ inventories have fallen to a 2-year low and sales turns are at a 2-year high. 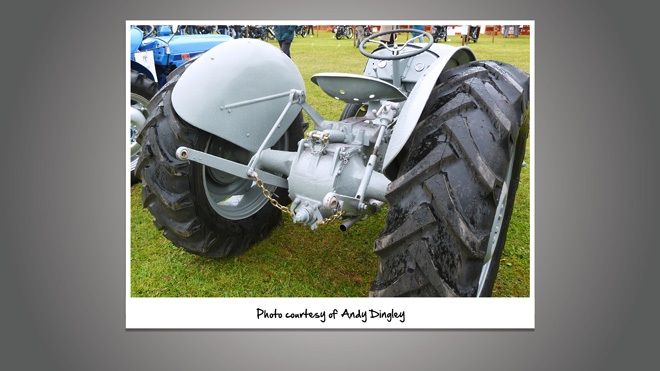 In 1928, Harry Ferguson designed the 3-point linkage. By mounting an implement on the tractor and using hydraulics to raise and lower it, rather than towing the implement, Ferguson revolutionized agriculture. His first prototype consisted of two lower links and one upper link, but he quickly recognized the problem with the linkage geometry and turned his invention upside down to resemble the modern design that has two lower links and one upper link. Today, 85% of tractors incorporate this basic design.