In today’s newscast, we look at how interest rate hikes might impact farmers' decisions on whether or not to buy equipment, an encouraging outlook for 2018 sales from rural lifestyle dealers, where no-till farmers plan to spend their money when it comes to equipment needs this year, and John Deere's latest earnings and updated 2018 forecast.

Interest rates are expected to rise throughout 2018 and a majority of farm equipment dealers believe it will affect their equipment sales. Consensus among most ag lenders is that we’ll see 3 rate hikes this year, that will increase interest rates by just under 1%.

Dealers were surveyed during the first week of February, and were asked, “Would a modest interest rate increase affect your customers’ equipment purchasing decisions?” 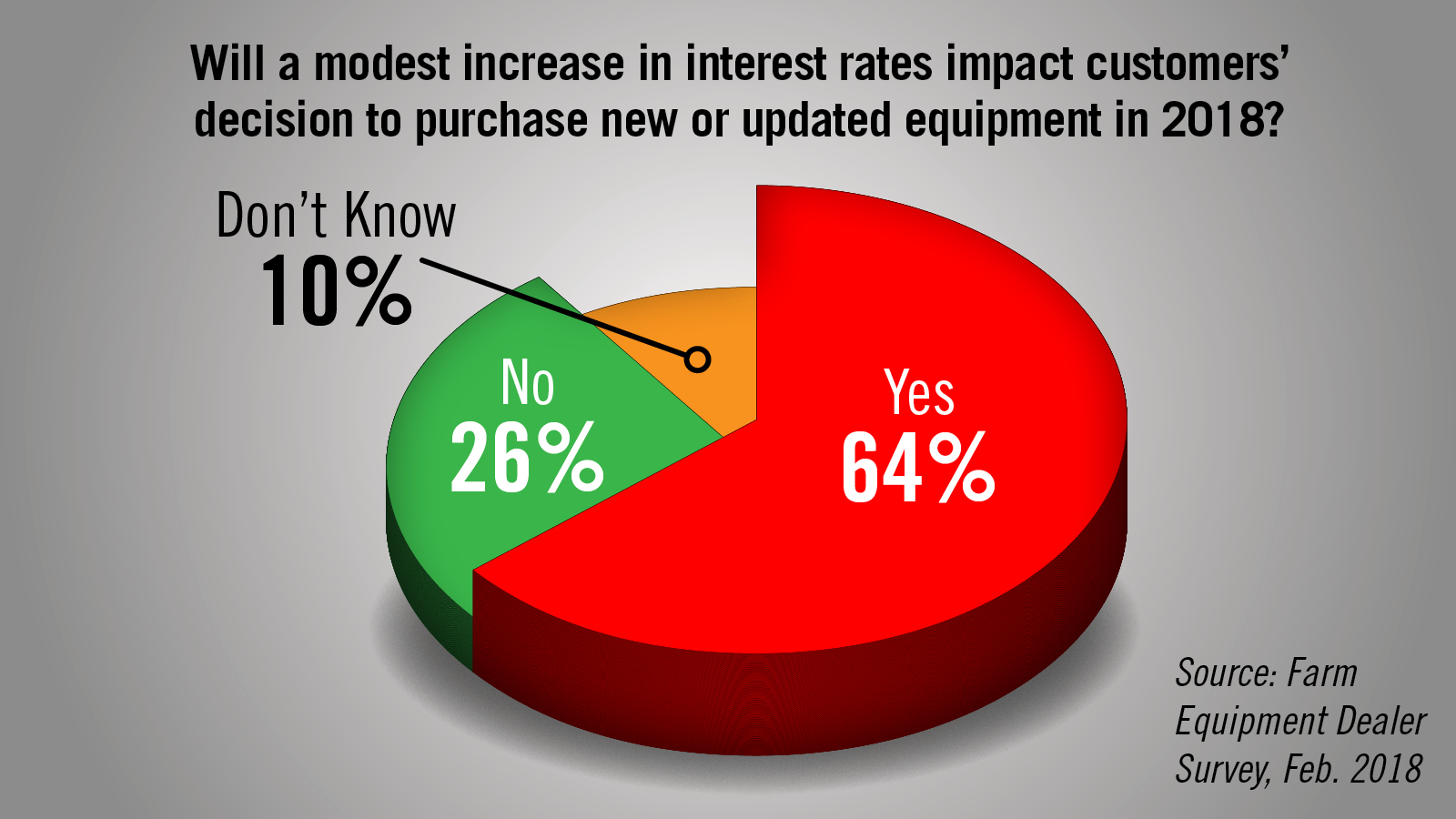 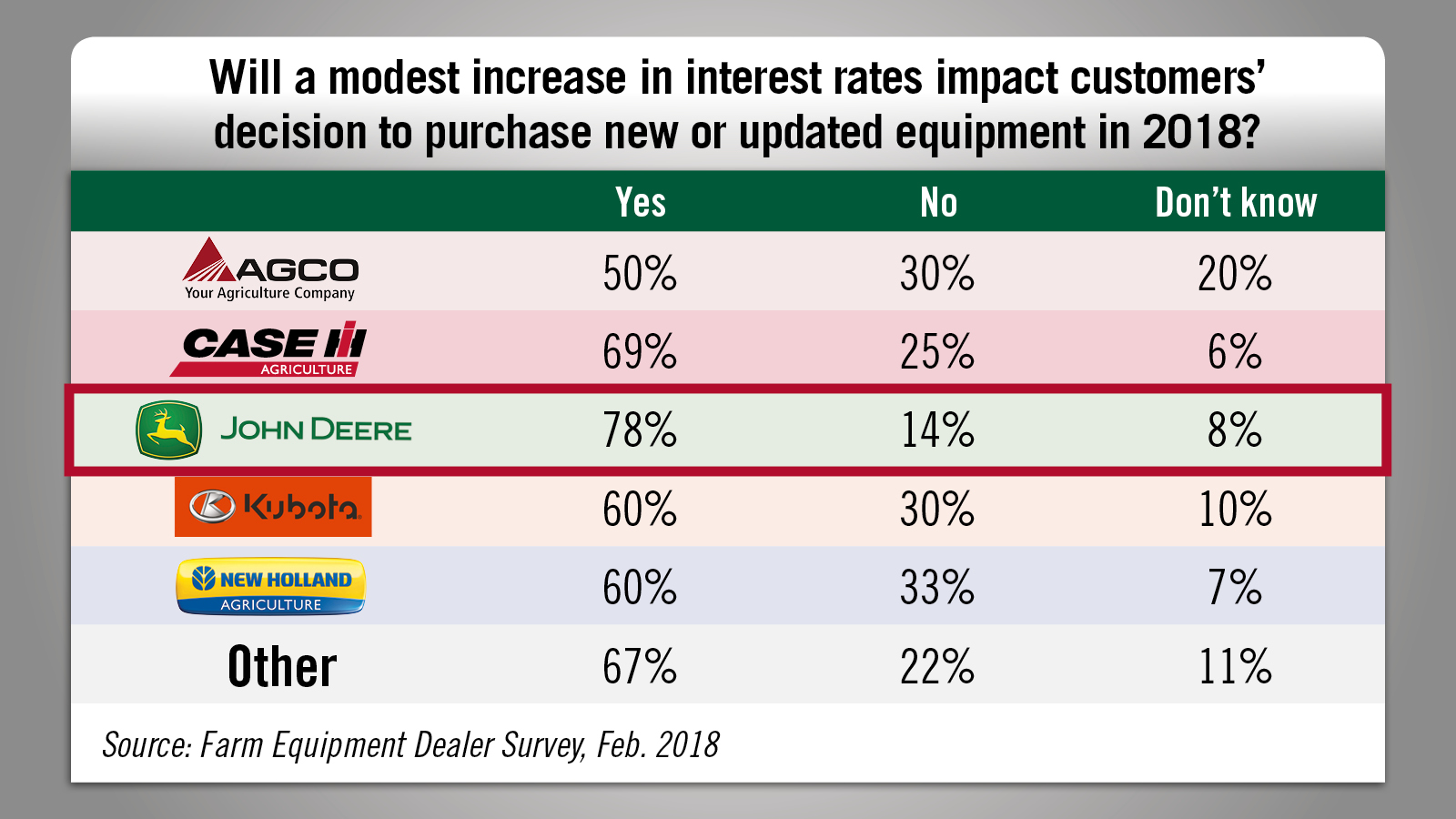 By equipment brand, John Deere dealers had the biggest concern about higher rates, with 78% indicating they would have a negative impact on their customers’ decision making in the year ahead.

This week’s Dealers on the Move include Cervus Equipment, RDO Equipment and Ag-Power.

Ag-Pro, a Deere dealer with stores in Missouri, Texas and Arkansas, has acquired Horizon Equipment in Easton, Mo.

The precision farming business is aggressively focused on the future — whether its product development and deployment, analytical application of collected field data or conceptual brainstorming of the next breakthrough.

Since the study began tracking technology adoption in 2010, the analysis reveals some interesting trends and with one exception, precision equipment is being purchased and more utilized by No-Till Farmer readers more today than ever before. 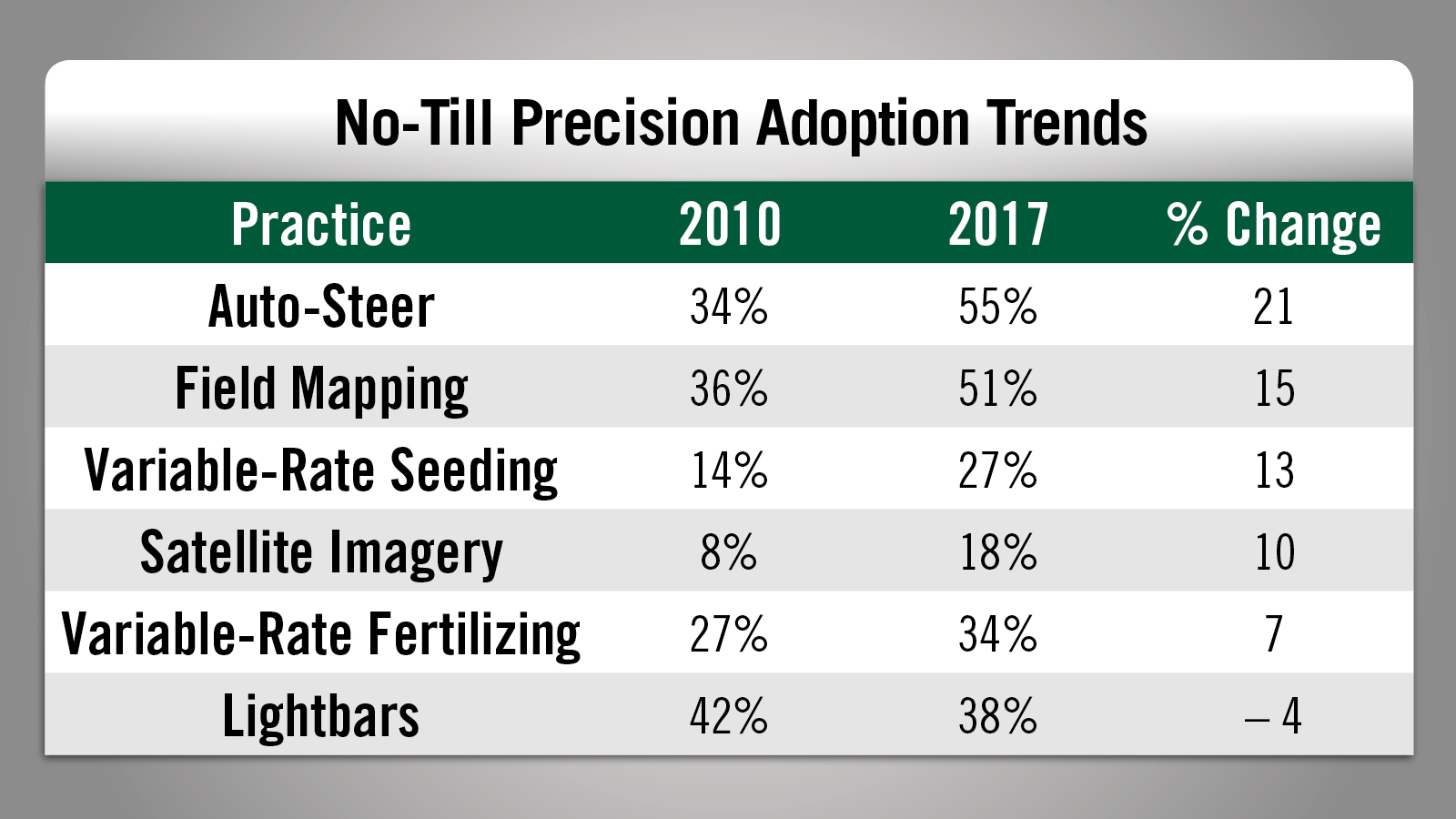 A few noteworthy increases include a 21% jump in no-tillers who use tractor auto-steer systems — the highest adoption increase — along with a 15% increase in use if field mapping and a 10% jump in use of satellite imagery.

Adoption of variable-rate seeding jumped 13%, while variable-rate fertilizing increased 7%. The only are of precision adoption to see a decline during the last decade was use of lightbars for guidance, falling 4%

No-till farmers report that despite rising expenses last year they were able to make some money. Of the 497 no-tillers from 26 states who responded No-Till Farmer’s recent survey, 68% say they were profitable. This was down by about 2% compared to a year earlier. Compared to 2014, though, it was down by 13%, when 81% of no-tillers said they made a profit.

The percentage of farmers who have purchased or plan to purchase farm equipment in 2018 is nearly identical to that in 2017. But it’s up by nearly 12% compared to 2016. No distinction was made between new and used equipment. 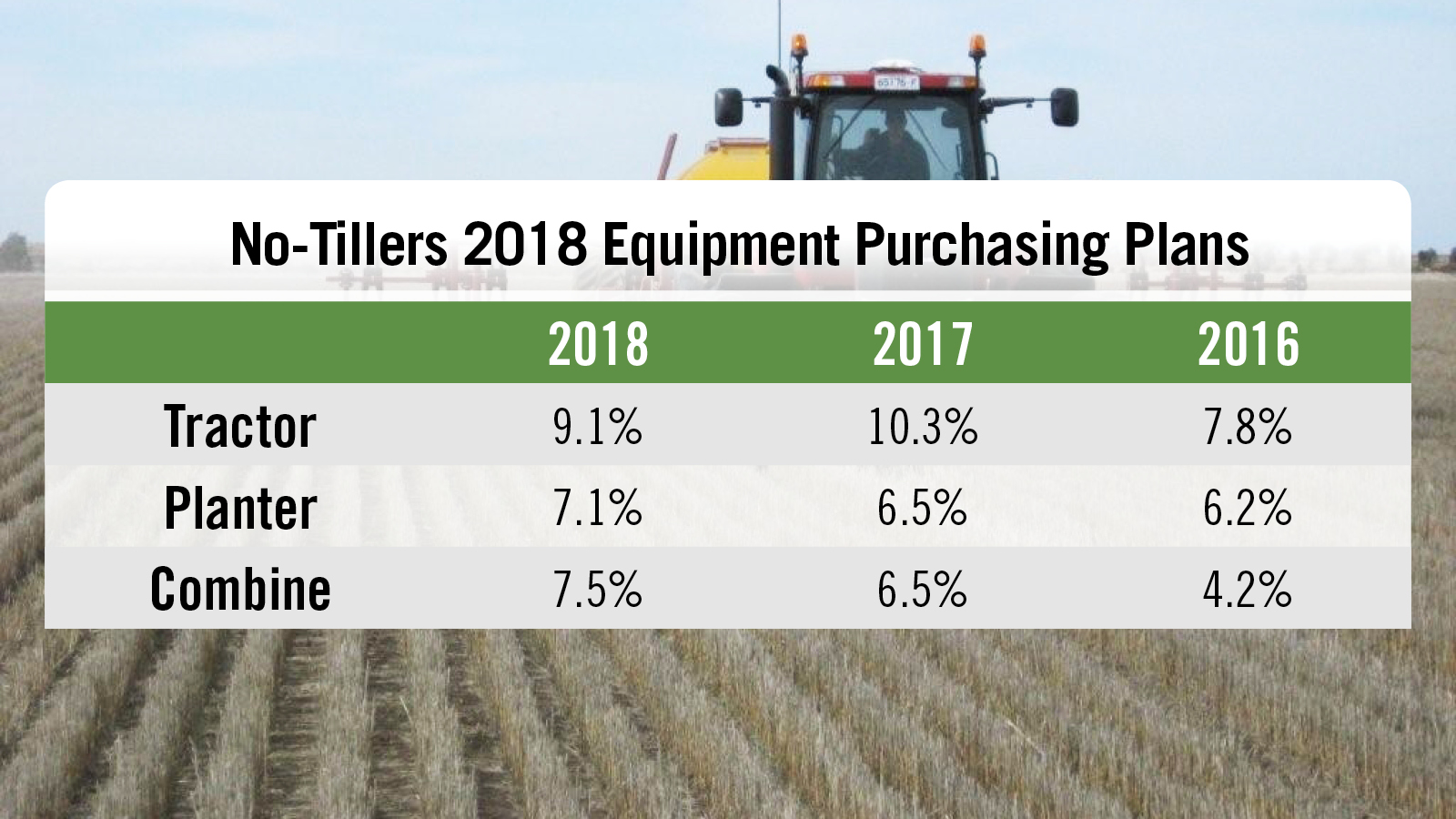 Overall, about 9% of farmers have acquired or plan to acquire a tractor for 2018, 7.5% have plans for a combine and 7.1% have or intend to purchase a planter. Most categories of precision technology equipment will see some growth in 2018 vs. 2017, and most have seen significant growth compared to 2016.

In case you missed it, John Deere reported its first quarter earnings on Feb. 16. Net sales and revenues were $6.9 billion, up 23% vs. the first quarter of 2017. 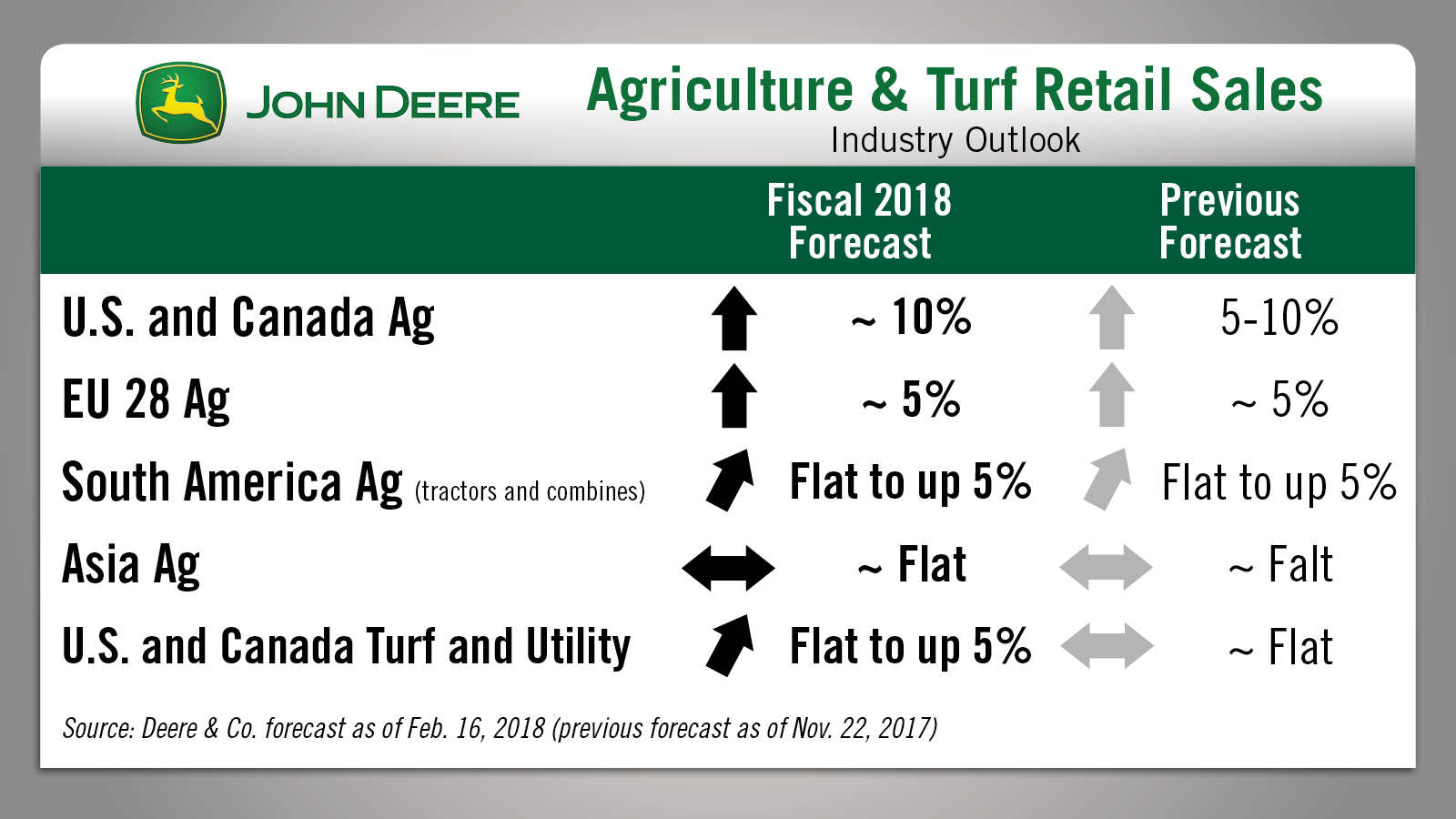 According to Ag Equipment Intelligence’s latest Dealer Sentiments & Business Conditions survey, Deere dealers are the most optimistic dealer group, forecasting 2018 sales to be up 4%.

In recent years, commercial and consumer equipment sales levels have been strong. And, according to Rural Lifestyle Dealer’s most recent dealer trends and outlook survey, North American dealers expect that trend to continue in the year ahead.

Nearly two-thirds of dealers polled forecast sales growth of 2% or more during 2018. This compares with 49% of dealers who expected higher sales levels a year ago.

Here’s Rural Lifestyle Dealer Managing Editor Lynn Woolf with some more details on what rural lifestyle dealers are saying about the year ahead.

Yes, dealers are very optimistic about the year ahead. Overall, nearly 92% of dealers expect 2018 to be as good as or better than 2017, up from 84% in last year’s survey. 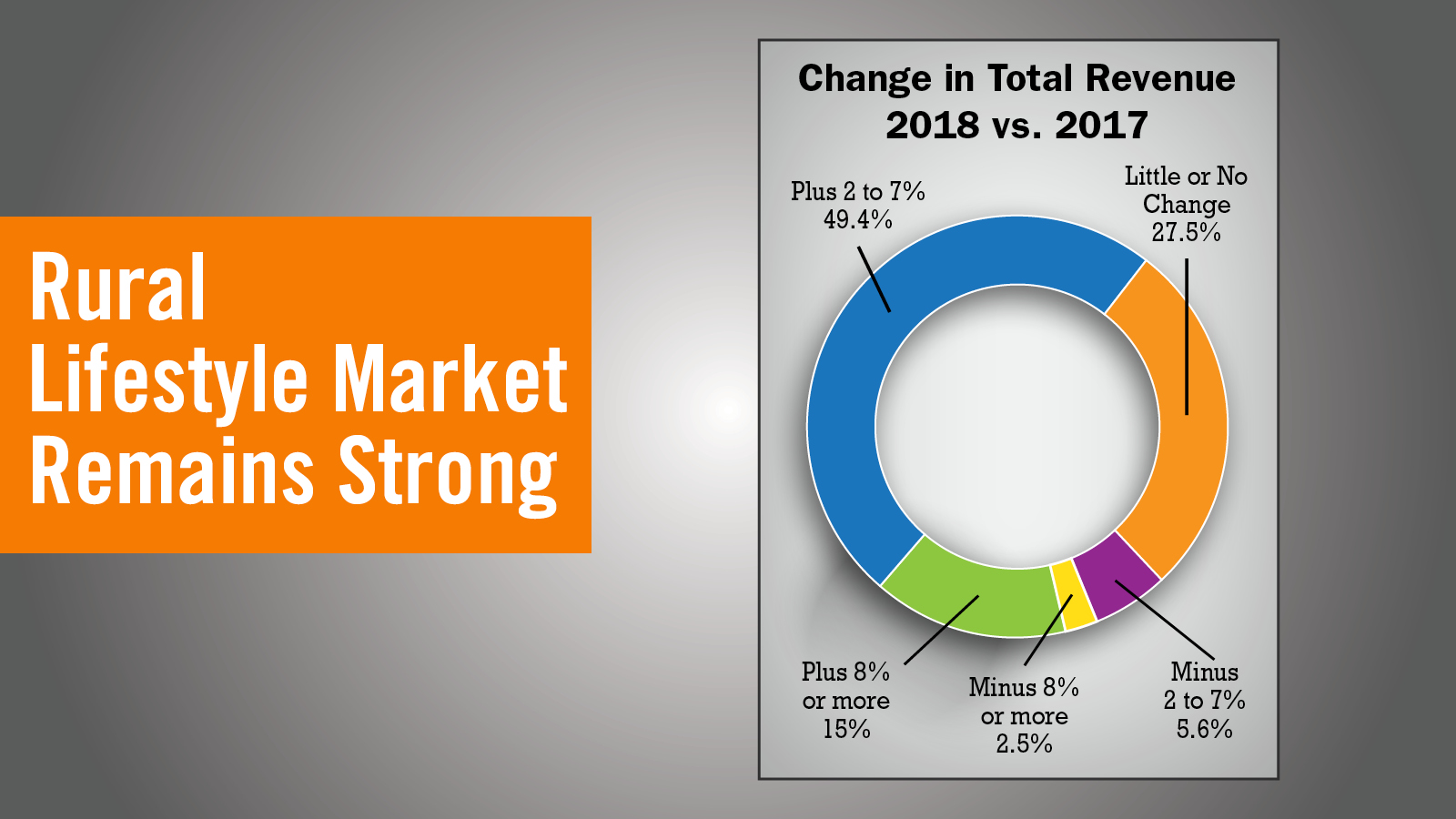 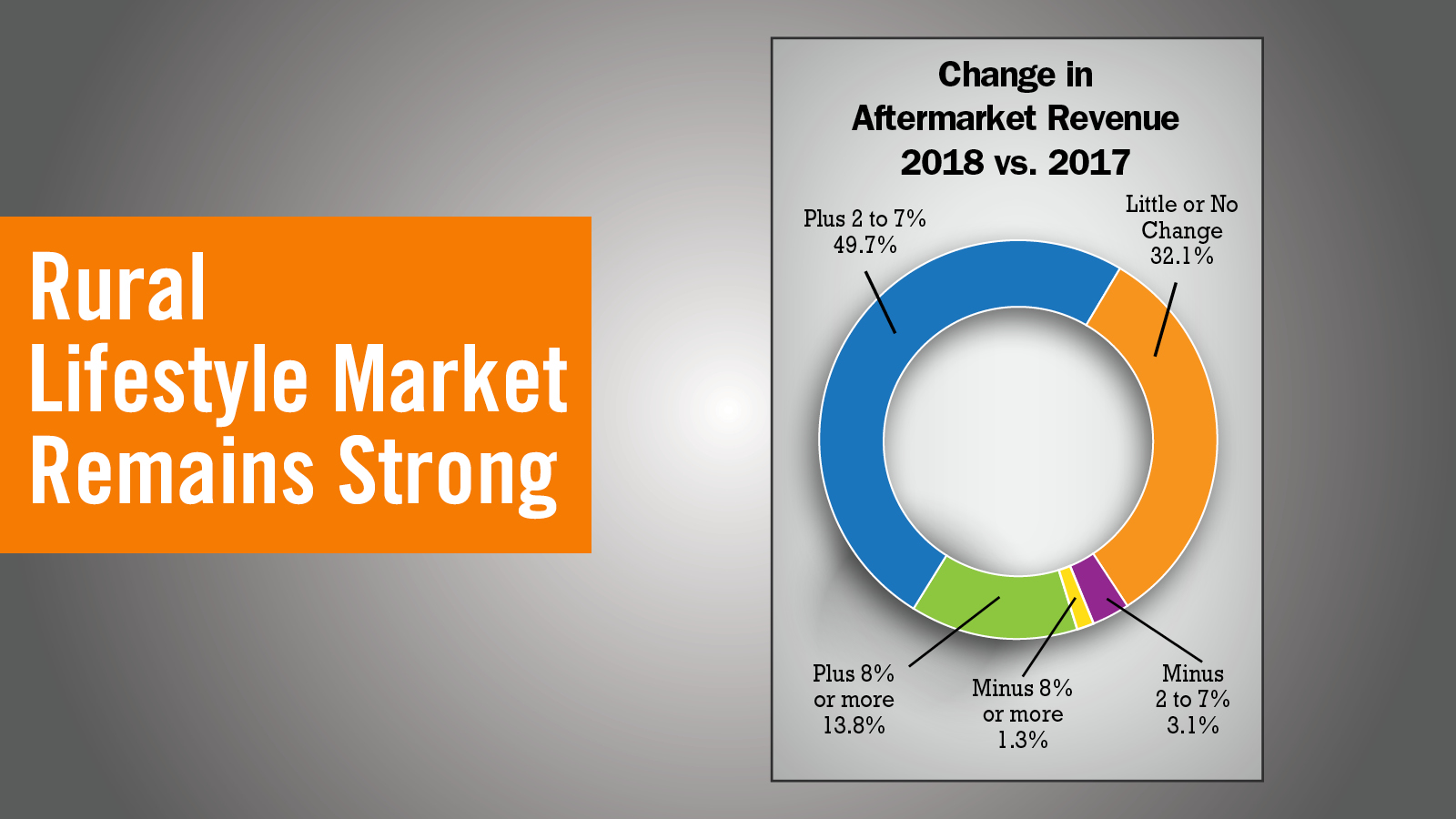 What’s driving that growth in terms of product categories? Zero-turn mowers topped the list of 26 categories in the survey in terms of unit sales growth. About 77% of dealers expect increases of 2% or more this year. Tractors less than 40 horsepower ranked second. Utility vehicles ranked third, rotary cutters ranked fourth and front-end loaders ranked fifth in the rankings. 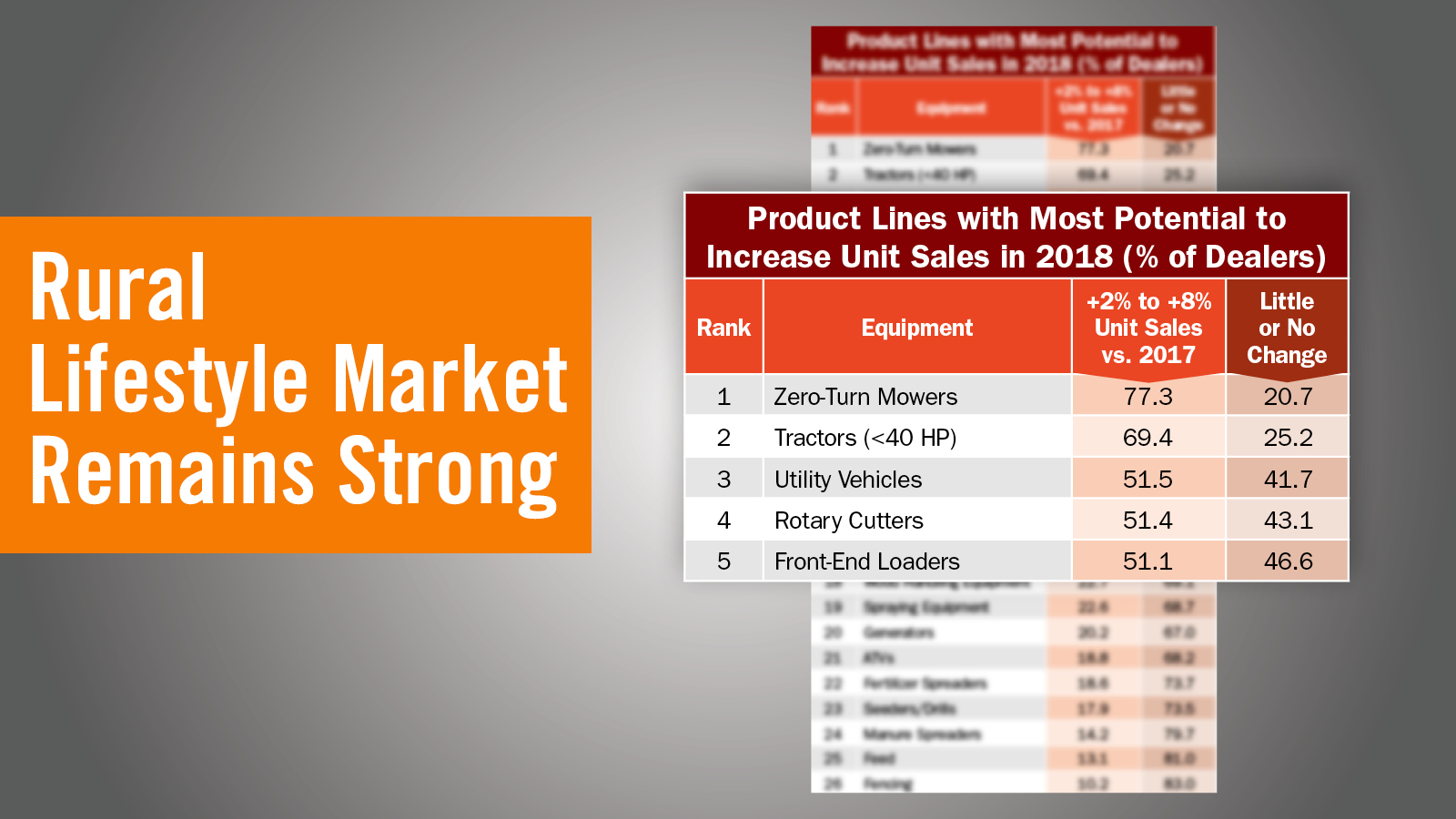 Dealers also shared how they expect to expand their lineups with the top 5 categories being utility vehicles, tractors less than 40 horsepower, zero-turn mowers, skid steer loaders and tractors 40-100 horsepower. 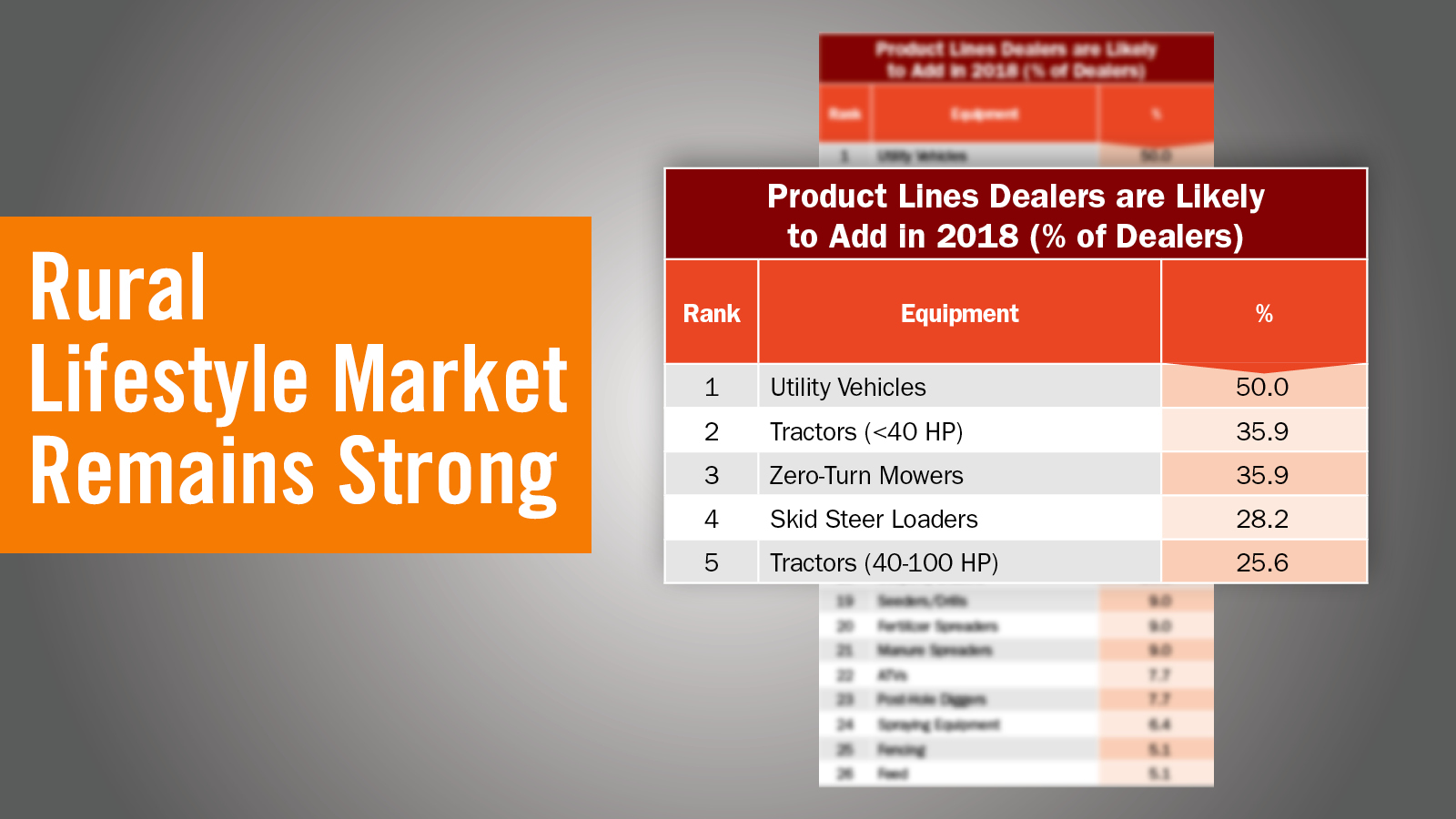 2018 looks to be an excellent year to be a rural lifestyle dealer. 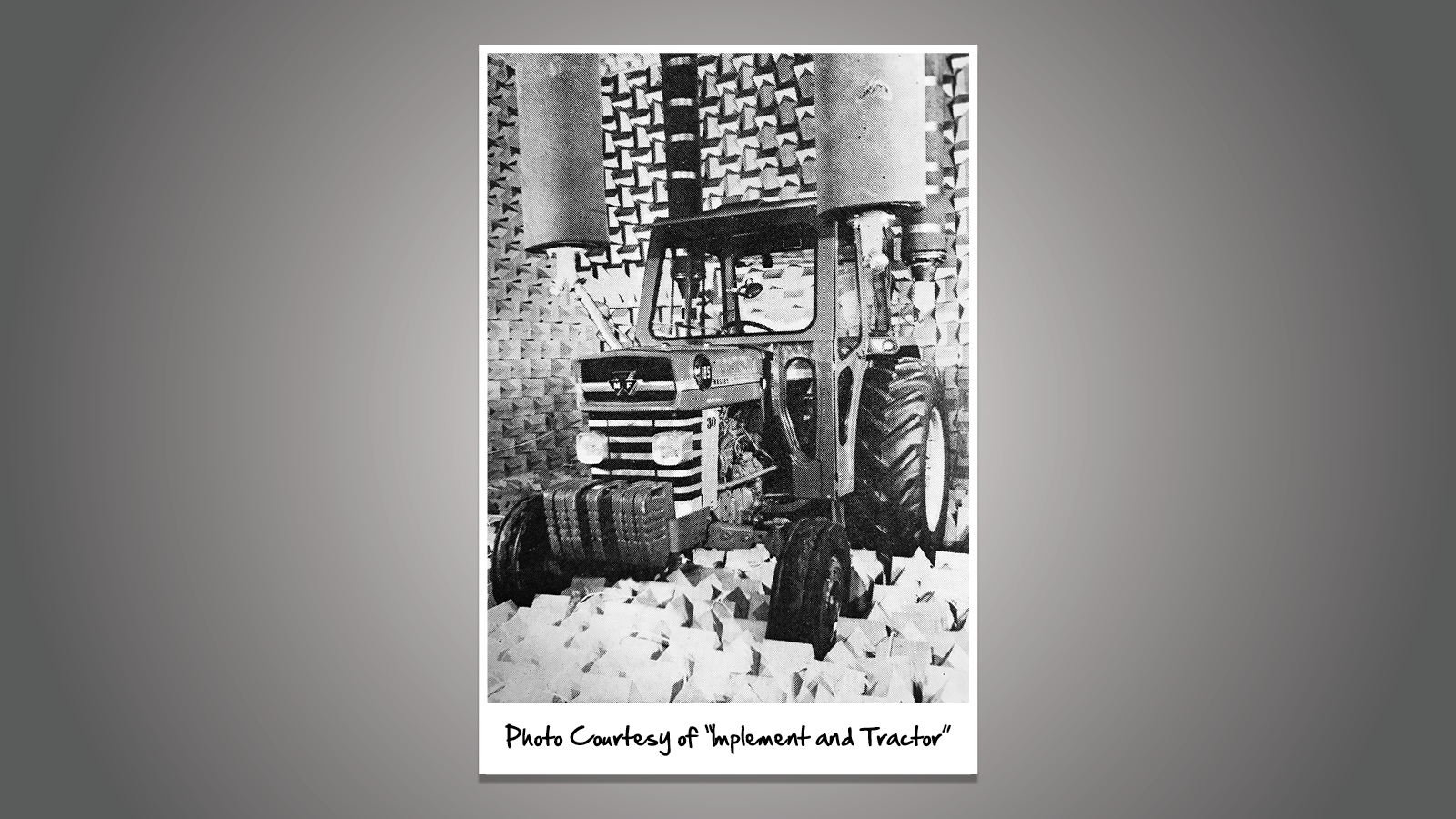 While most engine developments in the last several years have focused on lowering emissions to meet tightening environmental regulations, back in 1974 the focus was on noise reduction. According to Jan. 7, 1974 issue of Implement & Tractor, at that time about 80% of all 100 HP or higher tractors were sold with a cab. With the demand for increasingly quieter tractors, some engine designers worked at modifying the combustion chamber configuration and diesel injector design, as well as the basic structural formation of the engine block. This provided increased stiffness to reduce noise-causing vibrations and improved the sound dampening ability of the whole unit. The article goes on to discuss pollution control, but concludes that since “farm tractors contribute so little to overall pollution problems and are run in rural areas, away from urban concentrations of dirty air, stringent pollution controls are not expected in the near future.”