In the latest episode we look at Kubota’s year-end earnings, autonomous ag vehicles, comments made by Titan International's CEO on the year ahead for the tire maker, Agriculture and Agri-Food Canada’s 2016 outlook and Buhler’s first quarter earnings.

On The Record is brought to you by Ingersoll Tillage.

We interviewed three consultants to get their perspective on the challenges faced by shortline-only dealers. Here's what they had to say, in their own words.

Kubota Corp. reported earnings for the 9 months ended Dec. 31, 2015 with $11,024 billion in sales, up 9.2% from the same period in 2014. Due to a change in the fiscal year-end to December, 2015 figures were calculated by combining earnings from the April to December period.

In the domestic market, revenues increased 5% with sales of Farm and Industrial Machinery increasing due to higher sales of farm and construction equipment. Overseas revenues “rose significantly, mainly in North America,” the company reported.

Overall, revenues for the Farm and Industrial Machinery segment were up by 10.6% year-over-year and accounted for 82% of consolidated revenues for Kubota.

For 2016, Kubota is forecasting an increase of 3.6% to consolidated revenues year-over-year and expects the Farm and Industrial Machinery segment to remain at almost the same level as in 2015.  The manufacturer also forecasts that overseas revenues will increase in the coming year due to expansion in North America, Europe and Asia, outside of Japan, in Farm and Industrial Machinery.

In its earnings report, Kubota said, “The company will develop its business activities by expanding its presence in the farm machinery market for production farming as the core of its growth strategy ... The key to building ‘Global Major Brand Kubota’ will be the Farm & Industrial Machinery business in North America.” The company continues, saying it will be increasing its product offering in farm equipment for production agriculture and in construction with its new skid steer loader and utility vehicles.

Dealers on the Move this week include AimSouth, Wade Inc. and Ag Systems Inc.

AimSouth added the Claas line of equipment at its Trenton, Fla., location, as well as its stores in Pinehurst, Brooklet, Smithville, West Tifton and Camilla, Ga.

Now here’s Technology Editor Jack Zemlicka with the latest from the Technology Corner.

Recent years have seen momentum build for autonomous vehicles in agriculture as a potentially more efficient and durable alternative to today’s machinery.

But to bring autonomy to North American agriculture, it’s going to have to be phased in, says Kraig Schulz, president and CEO of Autonomous Tractor Corp.

The North Dakota-based company developed and patented two pieces of an autonomous solution it is gradually bringing to market. 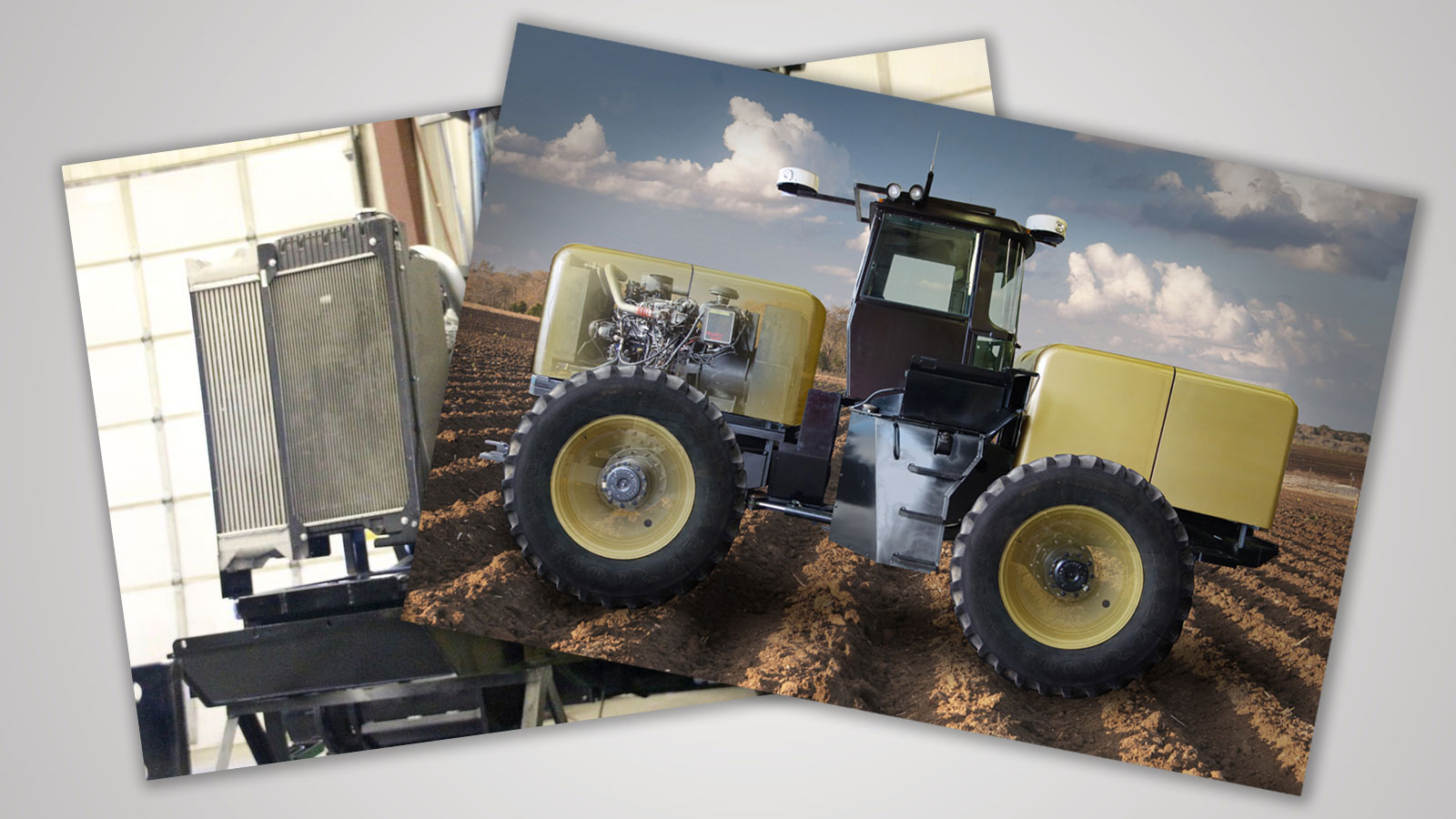 The first is an aftermarket diesel-electric motor called the eDrive system that replaces a tractor’s transmission with four simple motors. According to Schultz, a 400-horsepower system can increase fuel efficiency by 30% and increase the life of a tractor by upwards of 25,000 hours.

The second phase of ATC’s autonomy platform is its AutoDrive system, based off another piece of proprietary technology called laser-radio navigation system. This system replaces traditional GPS using portable radio beacons on the tractor that follow the contour of the land for a cleaner, safer signal.

Full implementation of the system is still a few years off, but Schulz says the company has begun to develop its dealer network to deliver its eDrive system.

“We’re not building a tractor company, we’re building a technology company. So we are working with dealers who are interested in building a business around doing the sales, installation and distribution, etc. We have 4 dealers now that we are working with and what we do is we have them purchase the first unit. We do the install on that first unit and now they’ve got a demo tractor, but they also have a reference platform for doing the installations themselves.”

While the retrofits themselves are relatively easy, Schulz acknowledges that the company’s long-term goal will be to keep its dealers trained and educated on phasing in its autonomy platform and easing customers out of the cab.

In its Feb. 25 earnings report, ag and construction equipment tire maker, Titan International, reported that fourth quarter sales fell by 20% to $308 million from $383 million during the fourth quarter of 2014. Full-year sales declined by 26% from $1.9 billion to $1.4 billion. 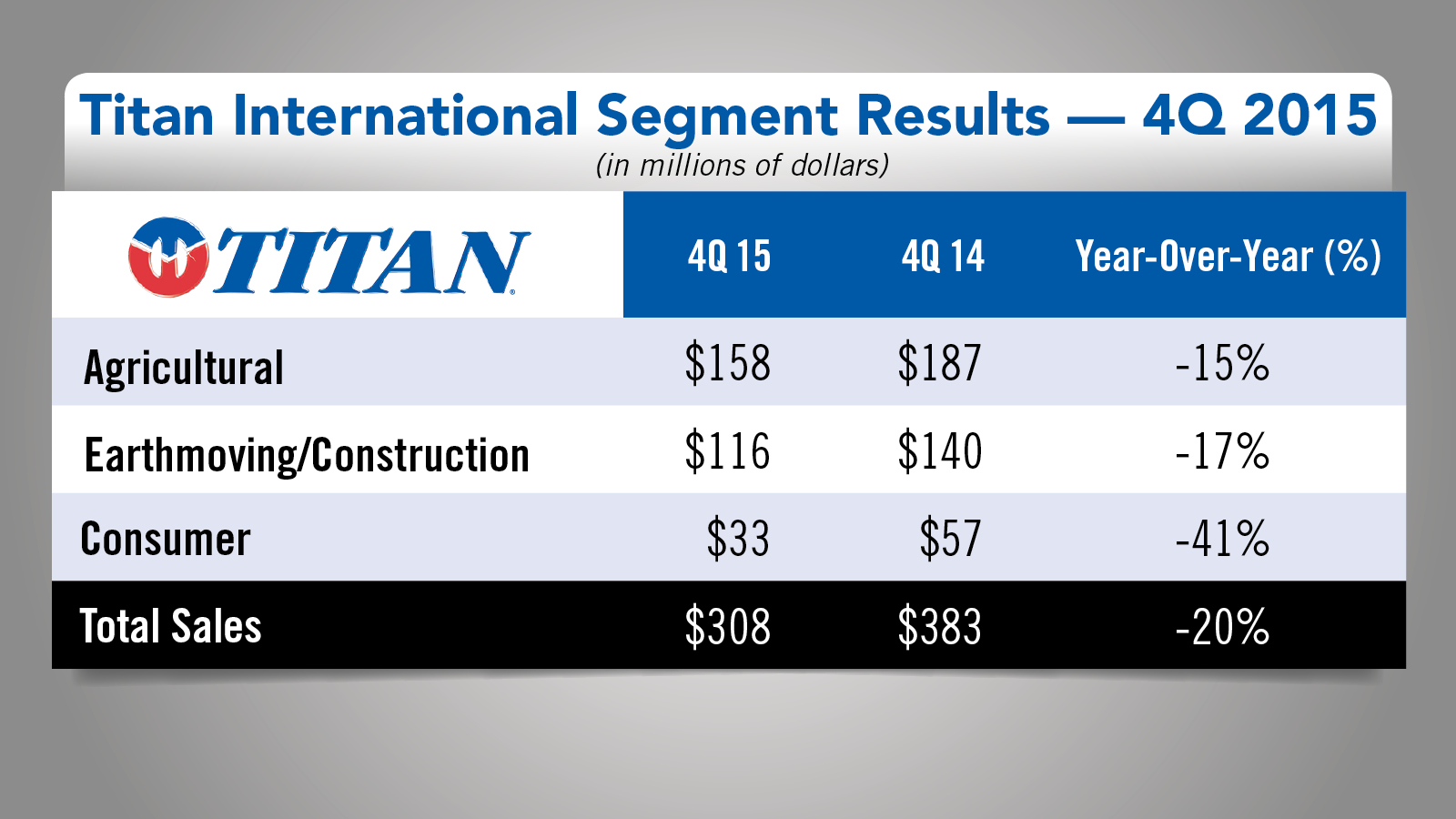 Commenting on the current state of his business, Titan International CEO and chairman, Maurice Taylor, said, that while 2015 was a challenging year, the company also experienced some positives. He cites “good” reductions in oil, steel and rubber prices, which reduced Titan's costs. He adds that Titan further reduced headcount expenses in the past 2 years by approximately 2,500 employees. As a result, Taylor says he is looking for revenue growth in the year ahead.

"I believe the year-end and fourth quarter results show that Titan is nearing the bottom in its markets,” he says. “Big iron products consist of combines, large tractors (over 250 horsepower) and sprayers. For these products, I believe sales in North America will be flat in 2016. In the 100 horsepower and under segment, we see market growth in 2016, up to 15% from 2015. Titan has a large share of tires and wheels in this market and we look to increase it.”

Agriculture and Agri-Food Canada released it’s 2016 Canadian Agricultural Outlook last week. The report offers a forecast of farm income for 2015 and 2016 and looks ahead 10 years to longer term trends that could impact the ag sector.

Unlike the U.S., the low Canadian dollar has improved the competitiveness of Canadian ag in export markets, which has contributed to the higher farm cash receipts.

When it comes to equipment sales, one dealer said in our latest Dealer Sentiments & Business Conditions Update that the weak Canadian dollar has allowed his dealership to ship a lot of equipment into the U.S. 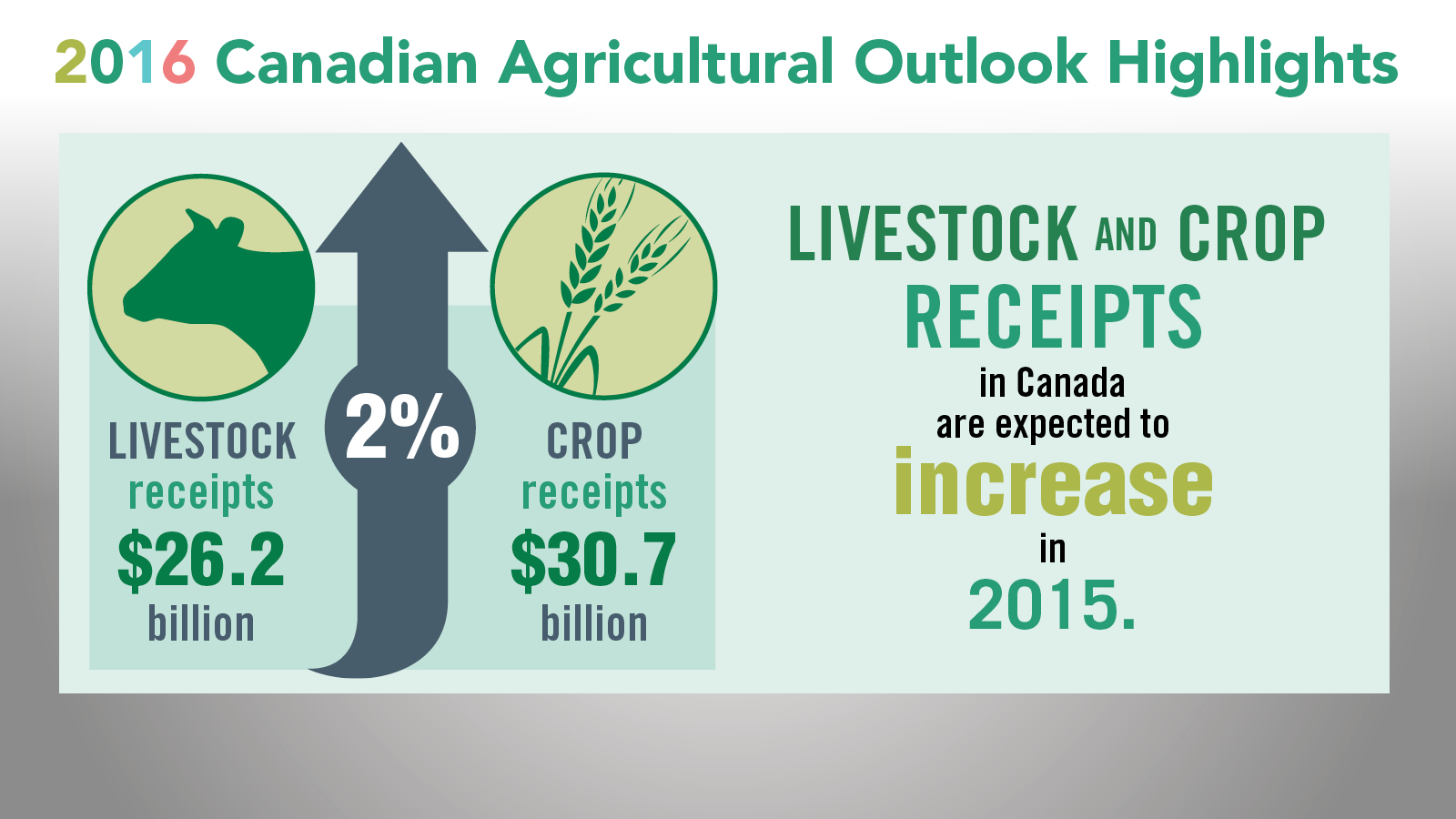 Canadian manufacturer Buhler Industries, maker of Versatile and Farm King equipment, released its first quarter earnings on February 16. Revenue for the quarter was $36.3 million, down 39.6% from the first quarter last year.

North American sales were down compared to prior years, particularly in the U.S. Sales to Eastern Europe were down significantly in the quarter.

The company says inventory levels are expected to drop in 2016 boosting cashflow. And, the weaker Canadian dollar continues to have a significant negative impact on the company with parts purchased in U.S. dollars with the majority of sales projected to be done in Canada during the year. 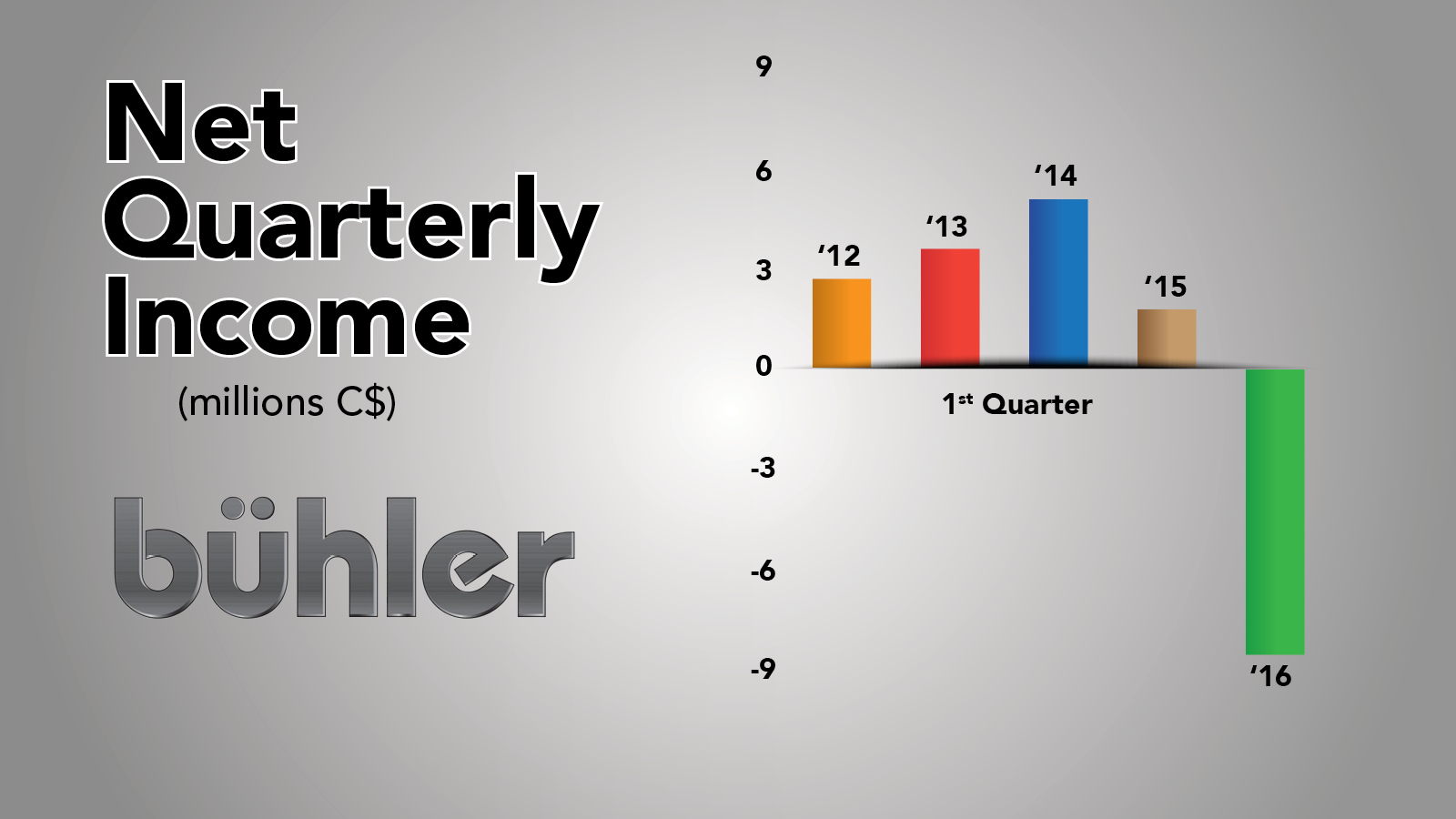 Advanced Harvesting Systems, a venture group of International Harvester, began developing a protein harvester, called the Probine, in the late 1970s in an effort to bring IH back to the forefront of harvester technology. The Probine was meant to shred crops into small particles and press them to separate the protein from the crop right in the field. Patents were filed in 1982 and the IH team had early prototypes built, but funding fell through for Advanced Harvesting Systems and when Tenneco purchased Harvester in 1984, the project came to an end. 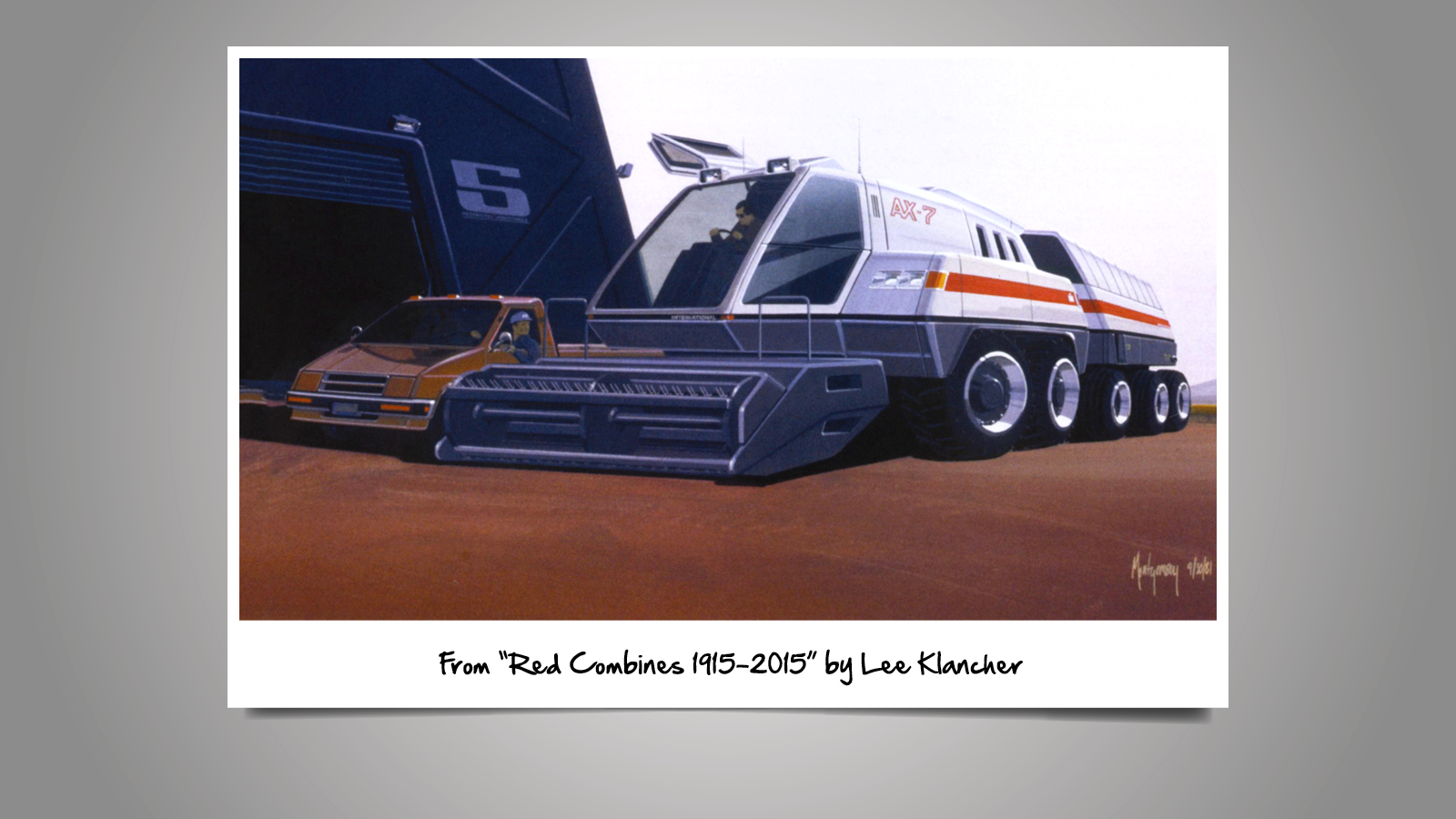 We always welcome your feedback. If you have any comments or story suggestions, you can send them to kschmidt@lessitermedia.com. Thanks for watching, I'll see you next time.