In today’s newscast, we have an update on the North Dakota Dealer Protection law and when we can expect a ruling from the judge, we take a look at the results from Purdue’s Center for Commercial Agriculture’s latest Ag Economy Barometer and what producers are saying about used equipment values, Deere dealers are looking to hire more precision farming techs, and the third quarter earnings reports from Rocky Mountain Dealerships, CNH Industrial, AGCO and Alamo Group. 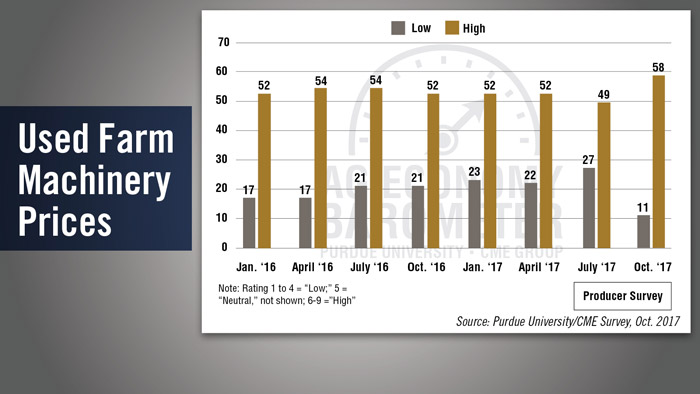 On Nov. 7, a judge heard arguments from farm equipment dealers and manufacturers in the suit. The judge has given both the plaintiff and defendants 30 days to submit additional documentation supporting their case. The judge said he will make a ruling on the injunction by the end of December. While the law is in effect, it currently cannot be enforced because of the pending injunction

Evidence is mounting that dealers’ used equipment inventories are coming under control. Once each quarter Purdue University’s Center for Commercial Agriculture asks producers to rate used farm machinery prices on a scale from one (very low) to nine (very high). During October, the share of producers rating machinery prices as high — a rating of six to nine — increased, while the share of producers rating prices as low — a rating of one to four — declined.

In October, 58% of respondents rated used farm machinery prices as high, the highest percentage since Purdue’s Ag Economy Barometer began collecting data in early 2016. On the other hand, the share of producers rating prices as low fell from a high of 27% in July 2017 to a low of 11% in October. The shift in perceptions regarding used farm machinery values could be an indicator that used machinery values are strengthening.

Anecdotal evidence from some Corn Belt farm equipment dealers suggests that sales volume during 2017 improved, which is consistent with producer responses to the survey.

This week’s Dealer on the Move is Koenig Equipment. The Ohio John Deere dealership has completed its acquisition of Smith Implement, adding 6 locations in Indiana. Earlier this year, Koenig sold its Indiana Case IH stores to Redline Equipment.

While the benefits of a comprehensive precision service and parts department are undisputable for today’s farm equipment dealerships, not every dealer prioritizes tech investments with the same level of emphasis.

In the 2018 report, Deere dealers lead the way for precision hiring plans in 2018, where 24.5% say they intend on adding a precision farming specialist to their staff, a category in which no other major manufacturer’s dealers responded above 17%. 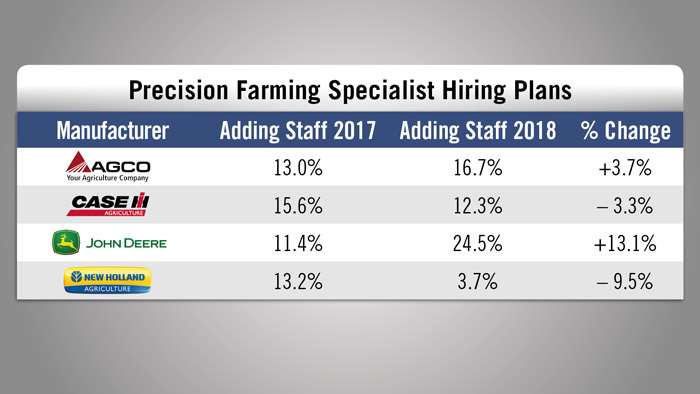 The hiring results show a significant rise in John Deere precision investment, as less than half as many Deere dealerships intended to expand their precision staff when asked the same question in last year’s report, at 11.4%. Comparatively, AGCO dealers who intend on adding a precision farming specialist in 2018 rose only 3.7% year over year, while Case IH’s number dropped by 3.2% in the same span.

You can view more of the results and analysis in Ag Equipment Intelligence’s 2018 Dealer Business Outlook & Trends report. 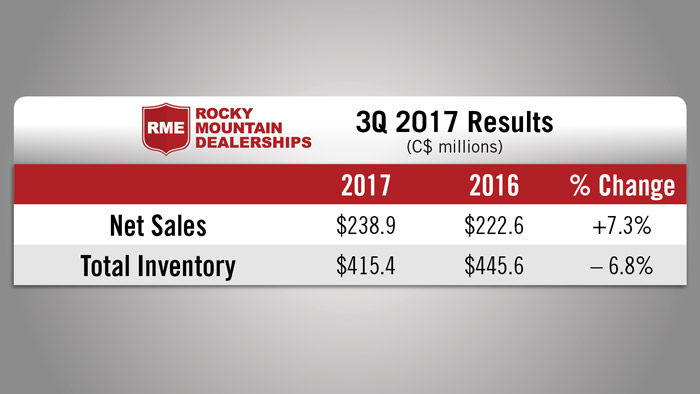 Rocky Mountain Dealerships reported its third quarter earnings on Nov. 8. Total sales increased by 7.3% to C$16.2 million vs. the same period of 2016 due to growth across all revenue streams.

Rocky President and CEO Garret Ganden says, “At a high level, the forward economic indicators for our sector are strong. There is mounting evidence that the Western Canadian market for agricultural equipment has turned around and is returning to normal levels after being depressed for a number of years.” 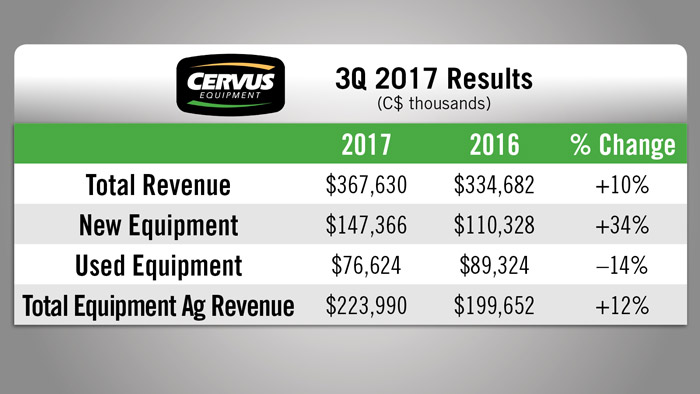 Parts and service revenues both showed strong growth, with increases of 12% and 25%, respectively vs. last year’s third quarter. Total revenue for the ag segment was C$270.6 million, an increase of 13%. 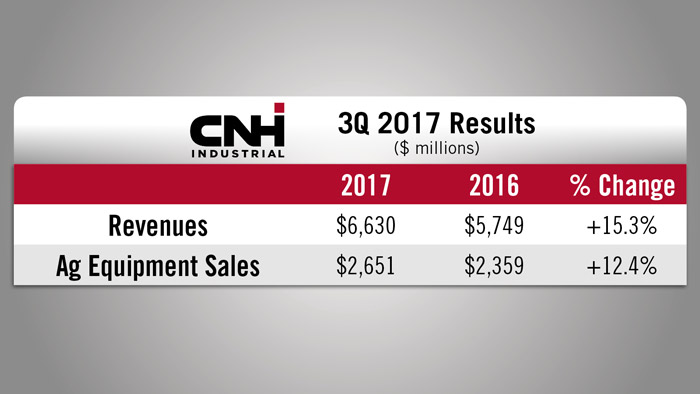 Net sales in Europe and the Middle East were up by 24.2%, primarily due to improved volume for combines and low horsepower tractors and to favorable net price realization. Net sales also increased in Asia/Pacific by 16.2%, mainly in India. Latin America sales saw an increase of 19.1%, mainly in Brazil and Argentina. Net sales in North America were flat, as stable row-crop market conditions and improved tractor mix were offset by reduced market demand for hay and forage products. 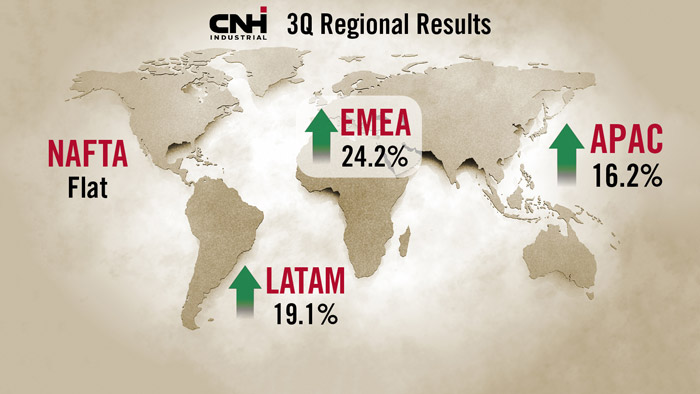 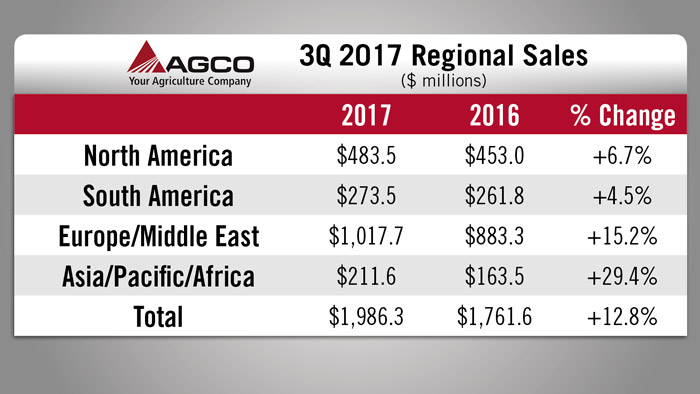 Looking at the regional results, all markets posted growth during the quarter. North American sales were up 6.7%, while Europe/Middle East saw sales growth of 15.2%. In South America, sales improved by 4.5%, and the largest improvement came in Asia/Pacific where sales jumped 29.4% in the third quarter. 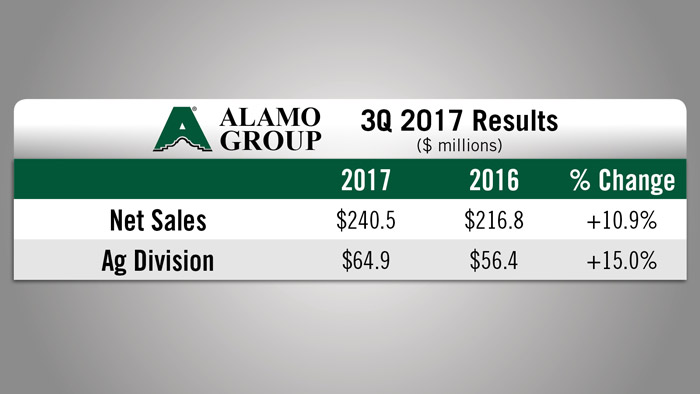 For the first 9 months of 2017 net sales in the Agricultural Division were $170.9 million compared to net sales of $157million for the same period last year, an increase of 8.9%.

According to Allis-Chalmers company lore, its tractors got their signature orange color after Harry Merit, manager of the tractor division, returned from a trip to California in 1929. During the trip he saw fields of brilliant orange wild poppies. He was so impressed with their visibility that he brought some home and had the original Persian orange developed from their color. And with that, the previous dark green color was out.