In today’s newscast, we report on a big improvement in dealer sentiment, updates from the SIMA Agribusiness Show in Paris, Kubota’s 2016 financial results, improvements in Brazil’s ag equipment factory shipments and the need for broadband infrastructure in rural America

I'm technology editor Jack Zemlicka. We're at the SIMA Agribusiness Show in Paris, France. Welcome to On the Record. Here's a look at what's currently impacting the ag equipment industry. 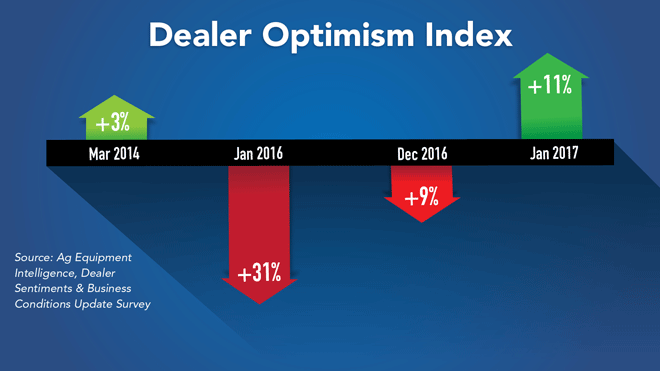 This week’s Dealers on the Move is Atlantic Tractor. McCombie Group, a private investment firm, and SeamLev Investments have acquired a majority interest in Atlantic Tractor, an 11 store John Deere dealership group.

McCombie has exclusive rights to market and service the brand’s agriculture and turf products throughout Delaware, eastern Maryland and southeastern Pennsylvania.

Back from the SIMA show in Paris, here’s Jack Zemlicka with the latest from the Technology Corner.

Last week I had the opportunity to attend the 2017 SIMA Agribusiness Show in Paris and observe some of the global trends shaping the future of the agricultural market.

With more than 1,700 companies from more than 40 different countries in attendance, there was no shortage of innovation on display. Here are a few of the highlights from this year’s show.

The theme of the 2017 show was “Being a Farmer in 10 Years” and there was clear emphasis on forecasting what the future of farming may look like, both from a machinery and technology standpoint.

Several companies showcased remote control robotic vehicles designed to perform repetitive field tasks in a variety of cropping systems. Though each was unique in its concept, the robots shared similar designs in that each was lightweight, mobile and versatile. It will be interesting to see if more of these companies emerge both in Europe and North America in the coming years.

Another conceptual design that debuted at SIMA was John Deere’s electric tractor. The Sustainable Energy Supply for Agricultural Machinery, or SESAM model, is the ag industry’s first fully battery-powered tractor.

The tractor frame is based on the manufacturer’s 6R series. The battery pack retains a charge for 4 hours, produces 130 kilowatts (174 horsepower) of continuous power, with a maximum output of about 400 horsepower, and is designed to last for 3,100 charging cycles. According to Deere representatives at the SIMA show, the prototype tractor is at least 4-5 years away from commercial production.

In February, Brazilian ag equipment factory shipments were up significantly, according to Ann Duignan, analyst with J.P. Morgan. Total tractor factory shipments in Brazil were 2,624 units, up 38% year-over-year and up 64% in 2017 year to date.

Combine shipments were up 38% year-over-year as well at 442 units.

AGCO, CNH Industrial and John Deere are all forecasting sales in South America to be up anywhere from 10-20% in 2017. 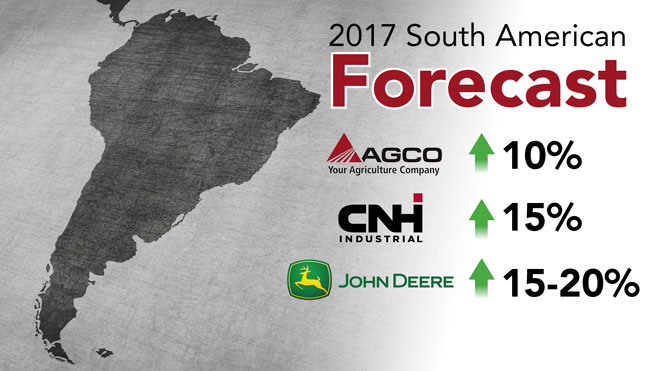 Duignan says, “We caution that pre-builds have a tendency to drag on beyond expected deadlines. However, underlying demand appears to have improved on the back of decent fundamentals for soybean and sugar producers in Brazil, which we would expect to result in further growth in 2017.”

In the Farm and Industrial Machinery segment, revenues for the year were $11.2 billion, a decrease of about 5% from 2015. This was due partly to the slow agriculture market in North America, the company says. 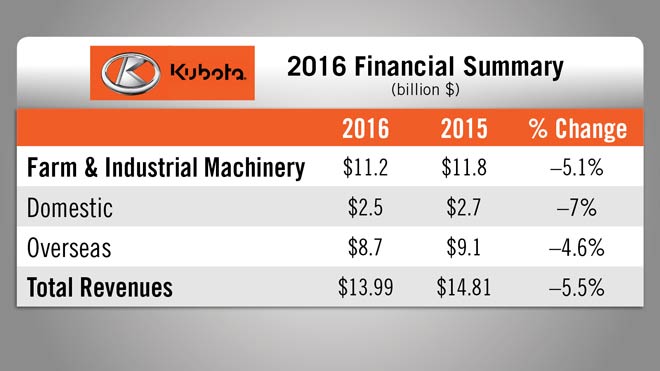 Overseas sales for farm equipment were down $523.3 million due to a drought in Thailand and stagnation in the North American ag market.

Kubota’s sales of compact tractors in the U.S. grew during 2016, which the company attributes to steady growth of the economy and the housing market, along with strong sales promotion activities. However, the U.S. market for mid-size tractors remains weak. While Kubota says the scale of the decline is shrinking, severe competition in this sector continues.

Looking ahead, Kubota continues to work toward building a major global brand. Over the last 3 years, the manufacturer has introduced its 170 horsepower M7 Series of tractors and acquired tillage and planter manufacturer Great Plains.

In the next 3 years, the company plans to put large-scale agricultural machinery business on track as soon as possible. This includes evolving “from the No. 1 manufacturer of rice cultivation machinery in Asia to the world’s top-class comprehensive manufacturer of agriculture equipment.”

Kubota’s plans include establishing a business base for its M7 Series, developing a tractor series over 170 horsepower and responding to the movement toward precision farming. 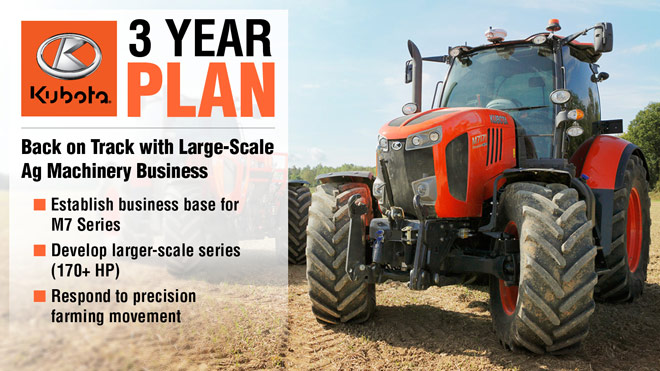 Leif Magnusson, chair of AEM’s Infrastructure Vision 2050 initiative and president of Claas Global Sales America, shared some insight on the shift in focus on some of the ag industry’s needs. Magnusson said one of the goals is to keep organizations competitive in both domestic and global markets. The initiative shifts focus from infrastructure as we already know it to evolving technologies like broadband.

With the introduction of telematics in agriculture equipment, today’s machines are not only made up of parts that talk to each other, but machines are also communicating with other machines. This system of machines creates data farmers need to make the right decisions. Broadband access is crucial to be able to share the data with trusted partners like agronomists or chemical experts to build prescription maps, Magnusson said.

He also noted traditional infrastructure issues — like highways, rails and waterways — are still in need of attention as well. 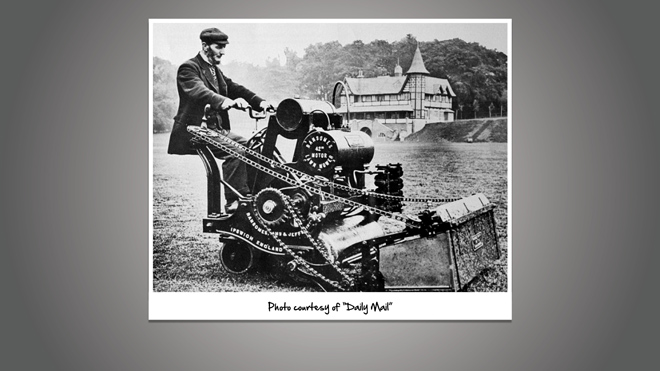 The first motorized lawnmower made its debut in 1902 and was the 20th century alternative to the horse-driven and steam powered mowers. The mower was 8 feet long and weighed 1.25 tons.

Developed in England, the Ransome drivable mower cost 137 pounds when it was introduced, the equivalent of 15,000 pounds, or a little over $18,000, today.

Given the high cost, only the rich could initially afford the machines and chauffeurs who were tasked with tending to their master’s lawn drove them.