In this episode, we discuss the farm equipment auction market, Deere's autonomous tractor introduction at CES 2022 last week, the continued decline in new and used equipment dealer inventories, and results of a survey on the impacts and lessons learned from the Deere work stoppage.

Dealers have been reporting high used equipment retail prices for the last several months, and the auction market is seeing similar trends. Luke Sullivan, an owner and manager for Sullivan Auctioneers, says fourth quarter farm equipment auction prices were the strongest they’ve seen in the 40 years they’ve been in the business. Across the board, nearly every category of farm equipment they sell was at or very close to all time record prices, he says.

He does note that November and December are when the auction market typically sees its highest pricing for the year. That said, he adds that the prices at the end of 2021 were still much higher than what would normally be seen the rest of the year.

Sullivan attributes those price increases to supply and demand and the supply chain issues impacting the new equipment market.

Looking ahead, Sullivan says high prices will continue for at least the first couple quarters of 2022, if not through the end of the year because of the factors that are currently driving the price increases.

“Crop prices still look really good for 2022. So farm income’s going to be strong. And then there’s just not a lot of equipment out there for people to buy. The supply is still very low and that's going to take some time. Most of the new equipment that’s going to be coming out of the factories this year has already sold. So that's orders that people are waiting on. So if somebody else is wanting to go out and buy a new piece of equipment, they're likely not going to see it until at least the end of this year.” — Luke Sullivan, Owner/Manager, Sullivan Auctioneers 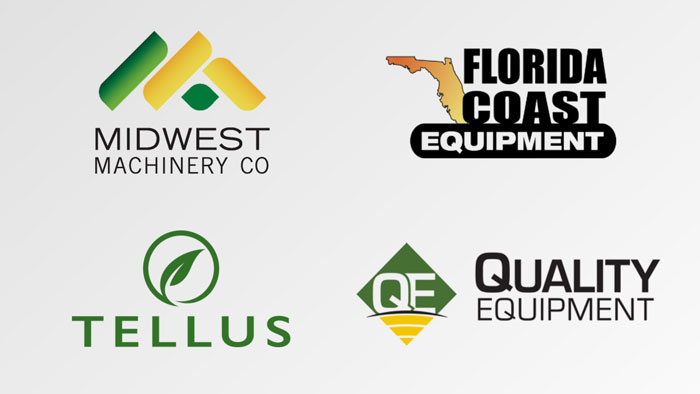 Texas John Deere dealer Tellus Equipment announced it is opening a new location in Austin as part of its continued expansion plan.

Quality Equipment, a Deere dealer based in North Carolina, has acquired Wilmington Lawn & Leisure. The dealership group now has 29 locations.

John Deere revealed a fully autonomous tractor at CES 2022 earlier this month. The company says the machine is ready for large-scale production and will be available to farmers in time for fall tillage operations. 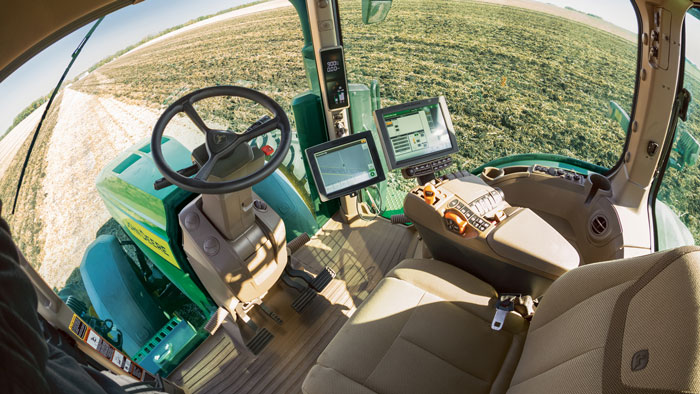 The 40,000-pound machine combines Deere’s 8R tractor, TruSet-enabled chisel plow, GPS guidance system and other new technologies to till fields on its own. 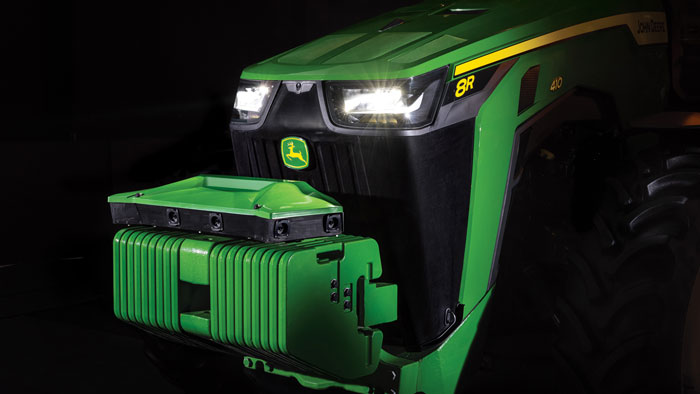 And images captured by the cameras go through a neural network that classifies each pixel in milliseconds. It determines if the machine continues to move or stops, depending on if an obstacle is detected. 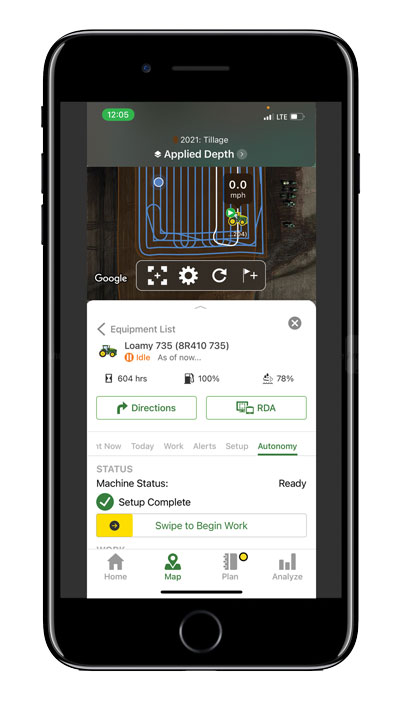 To use the machine, the farmer must transport it to the field and start autonomous operations using the John Deere Operations Center app on a phone or tablet.

The farmer can start and stop the machine, monitor its operations and analyze field data through the app.

A Deere spokesperson told Ag Equipment Intelligence that the autonomous 8R tractor will be delivered to U.S. customers in time for fall tillage operations.

However, a report from Bloomberg News says the company expects a slow rollout, with between 10 and 50 autonomous tractors made available to farmers in 2022.

As of this report, Deere has not released pricing for the autonomous 8R. Investment analysts say Deere intends to sell it as a subscription service with the details still being worked out — a decision they predict could turn into a multi-billion dollar revenue stream for Deere.

For more details about the autonomous tractor, including what we know about Deere’s plan for dealers servicing the equipment, click here. 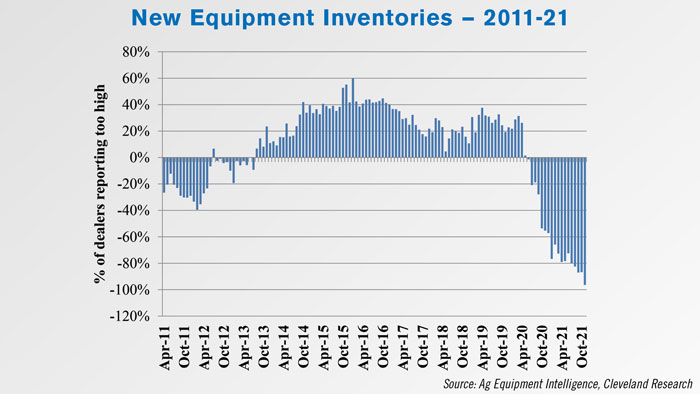 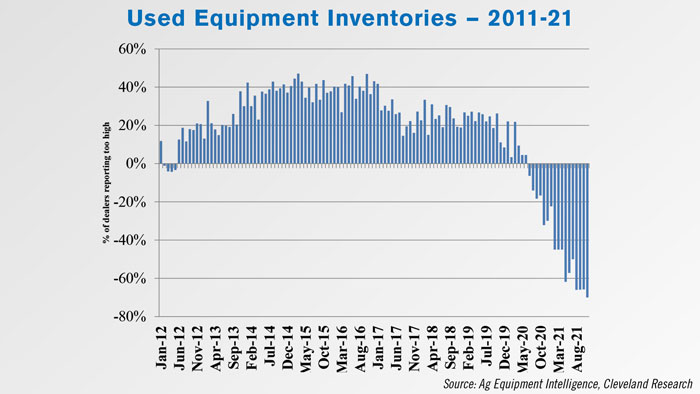 Commentary from the December update shows dealers mentioning both the strength of the market and the lack of available equipment. One dealer from the Mountain/Pacific region said customers in their area are still willing to wait for tractors despite long lead times and late deliveries. One dealer from the Lake States/Northern Plains region said a lack of new equipment sales meant fewer trades and described auctions as “extremely strong.”

Another dealer from the Delta States said they’d seen more orders cancelled instead of delayed.

A recent survey from Farm Equipment asked dealers how last year’s John Deere/UAW strike had impacted their business and what it might change in the industry going forward. 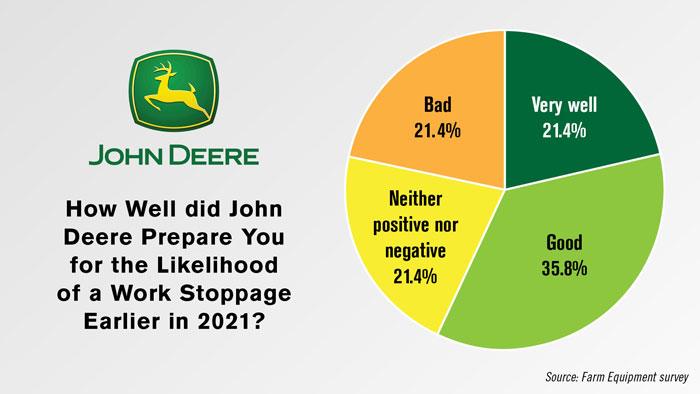 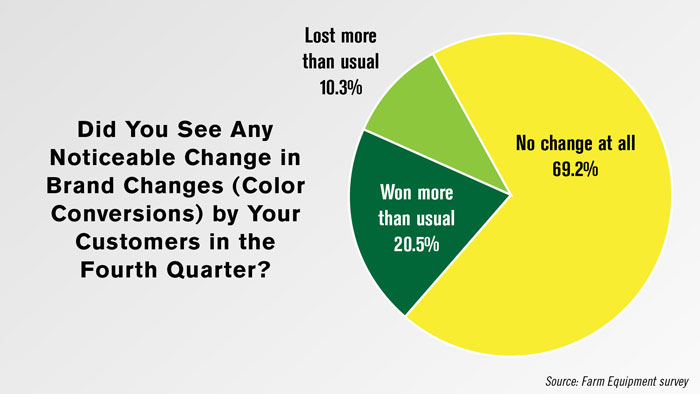 Just over 20% of all surveyed dealers indicated they’d won over more farmers to their respective major-line equipment brand than usual in the fourth quarter of 2021. Another 10.3% said they’d lost more of these attempted conversions than usual. Nearly 70% said they’d seen no change in color conversions.

Commentary from dealers suggests inventory problems were one reason a majority did not see a change in their attempts at changing farmers’ brands. As one Kubota dealer put it, “All colors were having supply problems, or so it seems. Our customers are exhibiting more patience than ever before.” 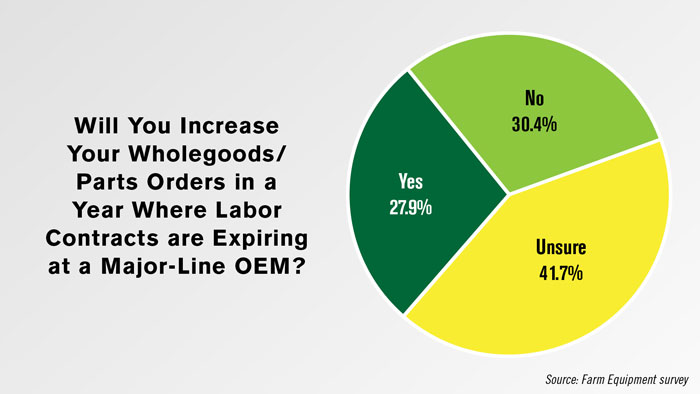 When asked if they would increase wholegoods and parts orders in years with expiring major-line labor contracts, nearly 28% of dealers said they would. Another 30.4% said they wouldn’t, and 41.7% weren’t sure.

When asked how they felt the Deere labor dispute would affect the farm equipment ecosystem going forward, several dealers mentioned staying ahead on their orders. One Kubota dealer said, “The ‘just in time’ ordering mentality is now obsolete. Dealers have to switch back to preparing themselves more to respond to an ever-changing marketplace. We now deal with issues from the customer end as well as the manufacturer.”