The latest episode of On the Record is no available! In this week’s episode, we compare what Machinery Pete is seeing in auction prices to what dealers report used equipment retail values to be. Also in this episode, dealers share what changes they anticipate in day-to-day business once we are passed COVID-19 and CNH Industrial and AGCO report their first quarter results. In the Technology Corner Jack Zemlicka talks with Tim Norris about how Raven has adjusted its strategy to showcase its AutoCart and DOT platforms to dealers.

Auction Prices on the Rise

According to Gupta, Peterson says for equipment that is either under warranty (1-3 years old) or older than 8-10 years that pricing continues to be strong. Gupta says, “In the case of relatively new machines that are still under warranty, buyers in this category may have purchased new historically but are happy to be able to pay the discounted prices of a slightly used machine. The appeal of machines 8-10 years old is that they are pre-Tier 4 emission standards and offer better value owing to lower engine content.”

He adds that a more recent developing trend is the strengthening of 5-8 year old equipment. These machines are in record supply as they were produced during the boom years when sales volumes hit records. According to Gupta, “Peterson is finally seeing signs of pricing firming after years of weakness that required Deere to take a write down on its lease book in 2019.” 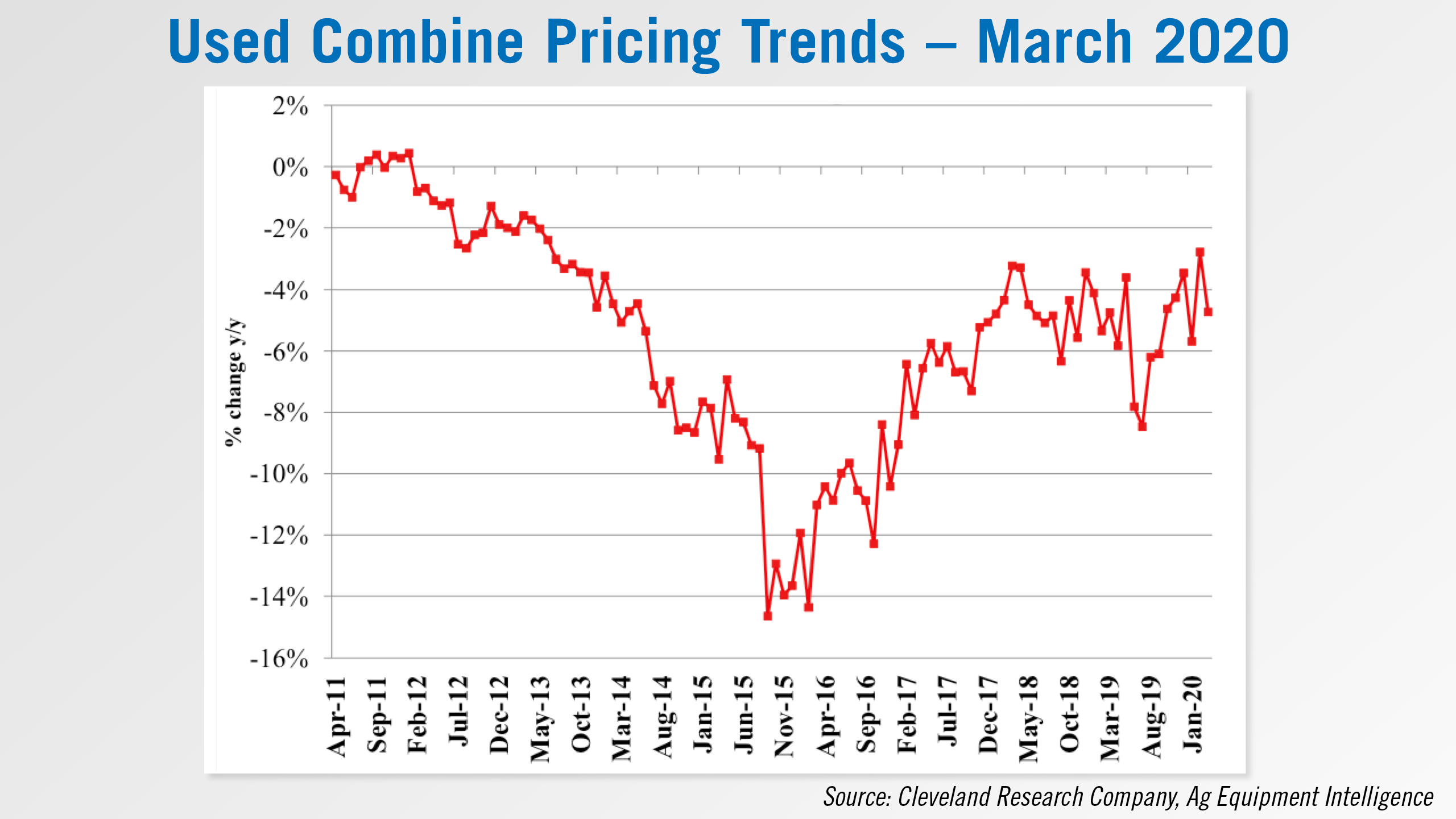 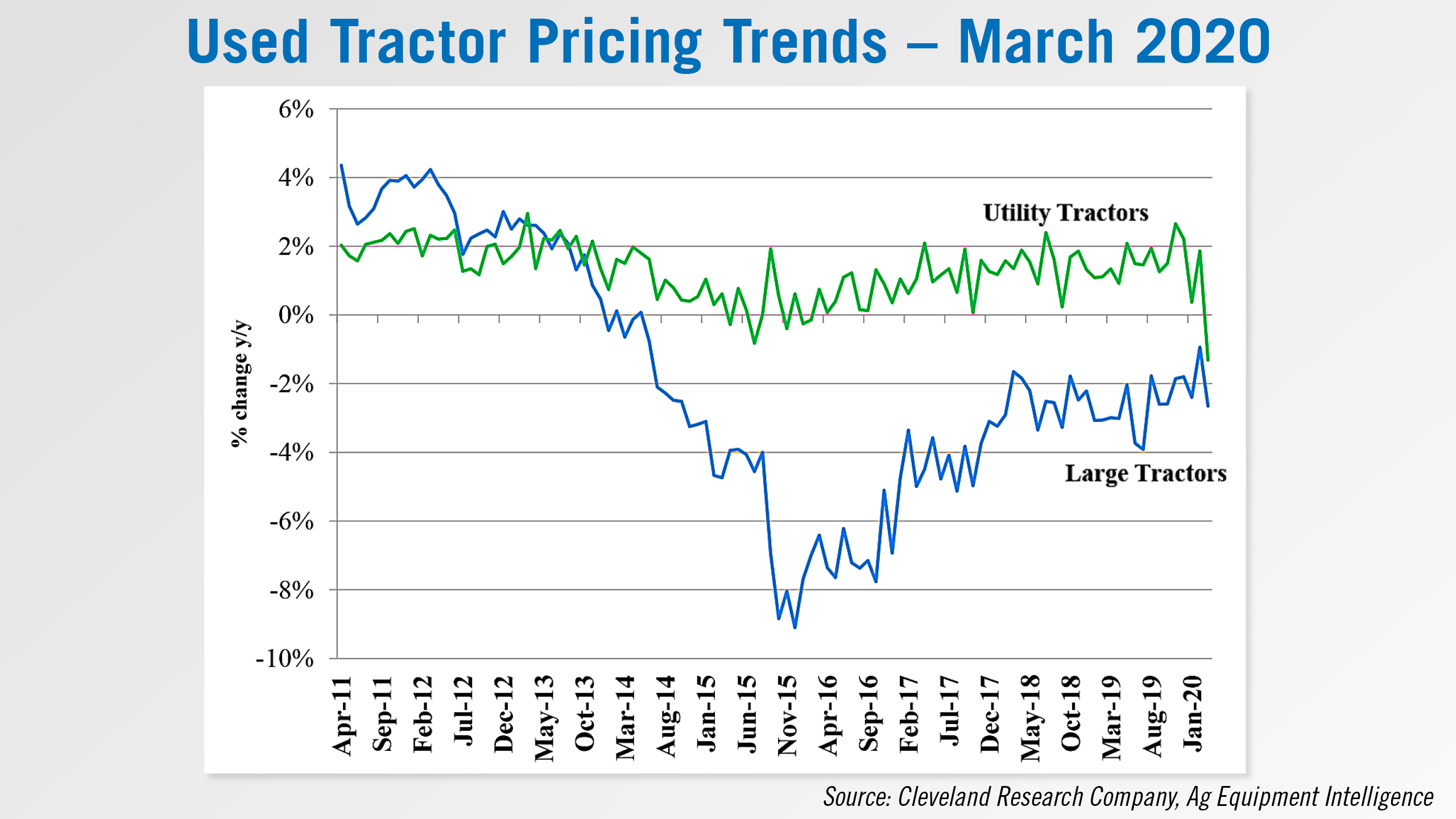 Conversely, dealers reported used equipment pricing was down 3% in March compared to down 1% in February, according to Ag Equipment Intelligence’s latest Dealer Sentiments report. Used large tractor retail pricing is down 3% year-over-year, while used combine retail price is down 5%. 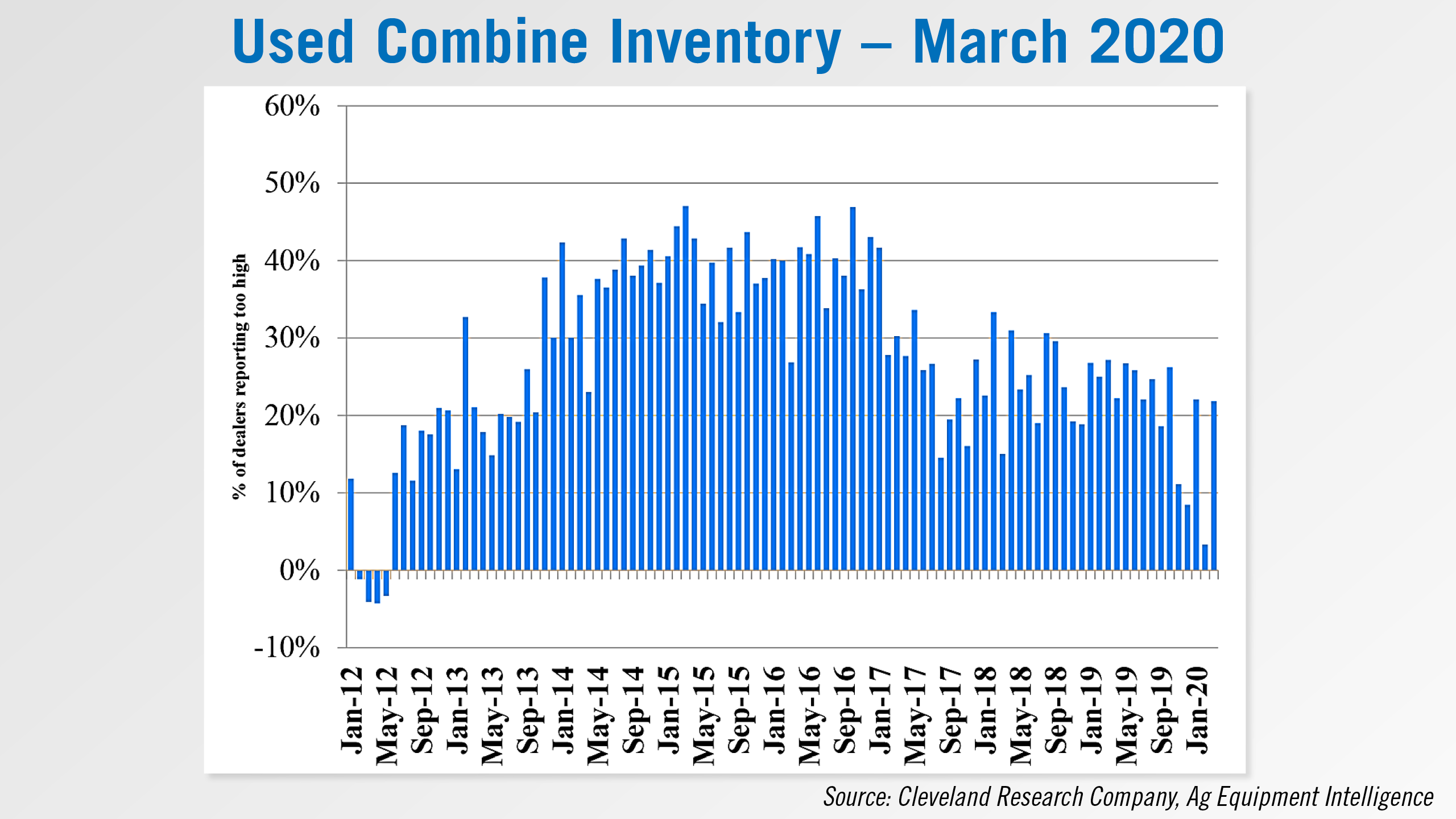 According to Peterson, April is typically a busy time for retirement auctions, but he noted even with a higher volume of auctions pricing has still increased. He believes auction pricing gains could be somewhat sustainable because of a lack of dealer inventory and the increasing price of new equipment. However, a net 22% of dealers reported their used equipment inventory is too high, according to the April Dealer Sentiments Report. It’s possible that the type and age of the equipment dealers have in inventory could explain the discrepancy in Peterson’s comment about a lack of dealer inventory.

This week’s Dealer on the Move is First Choice Farm & Lawn.

Adjusting the Pace of Autonomy in Ag

Momentum for autonomy in ag continues to accelerate with driverless systems being developed and demonstrated. However, over the past 6 months, companies have adapted the pace of progress to accommodate the unavoidable impact of COVID-19.

Tim Norris, business development manager for Raven Autonomy, works to develop the company’s dealer network by scouting and researching prospective partners. Like many, Norris — former CEO of Ag Info Tech — has been working from his home in Mount Vernon, Ohio, but his strategy to develop the seller market in autonomy continues.

He and his team have has pushed forward with coordinating opportunities to showcase the company’s AutoCart and DOT platforms. With uncertainty surrounding summer and fall farm shows, strategizing targeted demonstrations with select dealers is a priority.

“One of the things that we're trying to do is we implemented a dealer demo program where we want every dealer, to basically buy a demo system. We gave it to them at a pretty good discount so that people can see it, because this technology is something that people have to see. So because of those farm shows possibly being canceled, we've decided to do a lot of dealer events with their demo system. Instead of inviting a whole big group in and just doing it all in one day, let’s do it over two or three days and invite several groups of 10 or less people to come in. I think, it will provide a more intimate experience that way than we would if we'd just have one big event where we had a hundred people.”

Norris adds that the road shows will complement the company’s continued beta testing of autonomous systems at locations in Sioux Falls, S.D. and in California.

Hear more from Norris and other leaders in the ag industry online in Farm-Equipment.com’s Thought Leader video series.

As “business as usual” starts to return in some form for farm equipment dealers, nearly a third of dealers say there will be significant changes to how they conduct day-to-day business. And over two-thirds say some changes, though not necessarily major changes, will take place. Dealers are slowly starting to open their showroom doors as restrictions begin to lift in many U.S. states.

On May 4, Titan Machinery, Case IH’s largest dealership group in the U.S., announced 33 of its locations had opened their showrooms to customers. Another 3 locations were slated to open on May 11 and 2 more on May 18. As of May 4, 36 locations did not have a reopening date set. 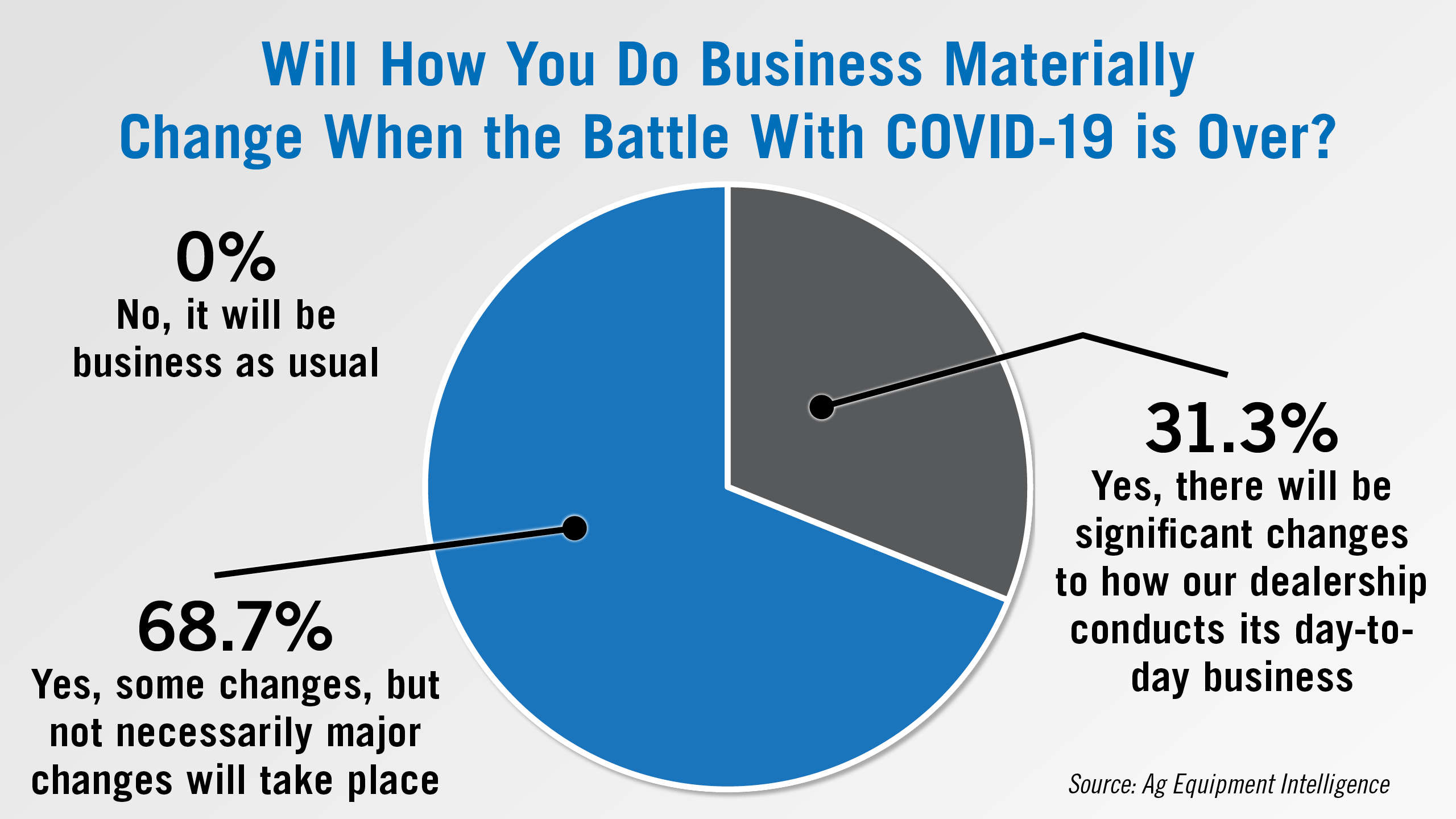 Dealers say some of the practices but into place over the last two months because of social distancing may stick around. “There will be no return to normal. Distancing and exceptions to the norm will be the new normal for many customers,” says one dealer who responded to Ag Equipment Intelligence’s coronavirus survey.

The farm equipment business had been slowly moving to more digital sales and interactions before COVID-19 took hold, and one dealer said this “just turbocharged things.” He said, “We have moved to a virtual world and for many it is easier and will be normal. Auctions online will be the norm. Parts for sure will have a larger part online as well as rural lifestyle equipment. Marketing will be all digital and salespeople will interact even less than ever before with customers face-to-face.”

The parts department has the potential to see the most lasting changes in how business is done. Dealers point to parts orders increasingly being made online even after stores are once again open to customers. Likewise, many cite curbside pickup as being one of the lasting effects of changes implemented because of the coronavirus crisis.

While overall a move to more online business seems to be positive, one dealer pointed out a potential challenge with dealerships doing more online. “More emphasis on technology with customers doing more online shopping is making it difficult for some dealers to distinguish themselves from inline competition other than price,” he said.

The impact of the COVID-19  pandemic, which led to plant closures, added up to a disappointing first quarter of the year for CNH Industrial. The company posted a 15% decline in consolidated revenues for the period ended March 31. The first period of the year also produced a net loss of $54 million vs. net income of $264 million in the first quarter of 2019.

Net sales covering the company’s industrial activities were down 17% to $5 billion. CNH Industrial’s net sales of agricultural equipment were $2.2 billion in the first quarter, down 10% compared a year earlier. Sales of construction equipment fell by 34% to $422 million vs. the first quarter 2019. 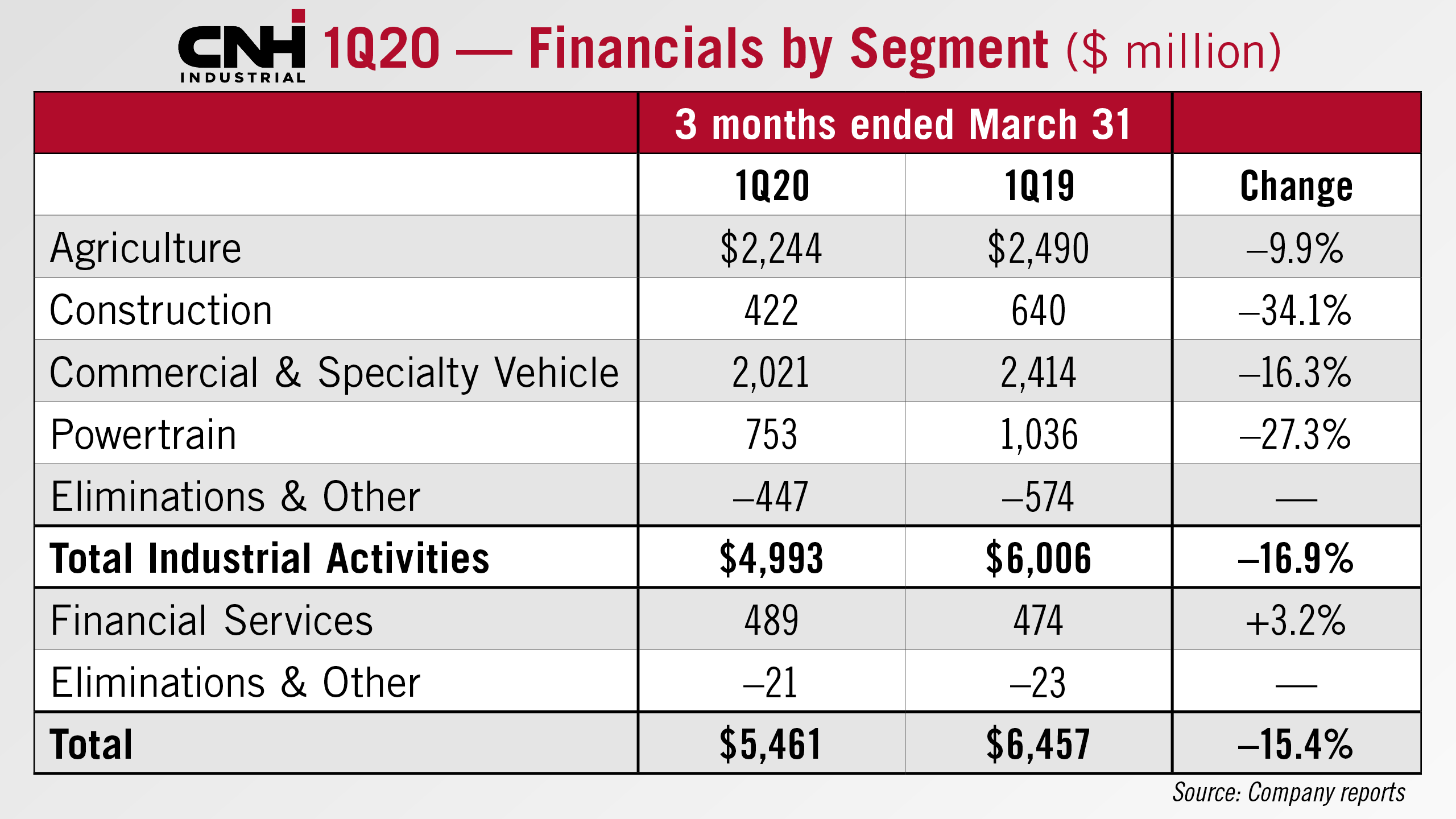 In a note to investors, Stanley Elliott, analyst for Stifel, said, “First quarter results fell below expectations on both the top and bottom lines. Industrial sales, which fell 14% year-over-year at constant currency, were impacted by COVID-19 and dealer destocking while profitability was impacted by lower volume and negative factory absorption from plant shutdowns, mostly in Europe.”

As of May 5, CNHI reported that about two-thirds of its plants were operational — approximately 75% in the EU, 60% in North and South America, and Rest of the World. The company indicated that it intended to be fully operational by the end of this month.

Following the call with analysts after release of the first quarter earnings, Elliott reported that, “In ag, CNHI expects second quarter 2020 sales down in excess of 20% in North America and South America and the EU with certain products down as much as 40%. EU is expected to be the most heavily impacted region with tractors and combines down 30%. CNHI expects North America to be less impacted than EU, with modest recovery beginning in the second half of 2020, although visibility admittedly is low,” said Elliott.

He added that “Expectation is for ag to outperform other segments in second quarter and in the recovery phase.”

AGCO also recently reported its earnings for the first quarter of 2020. The company had net sales of about $1.9 billion, a year-over-year increase of 0.2% excluding the effects of currency translation. 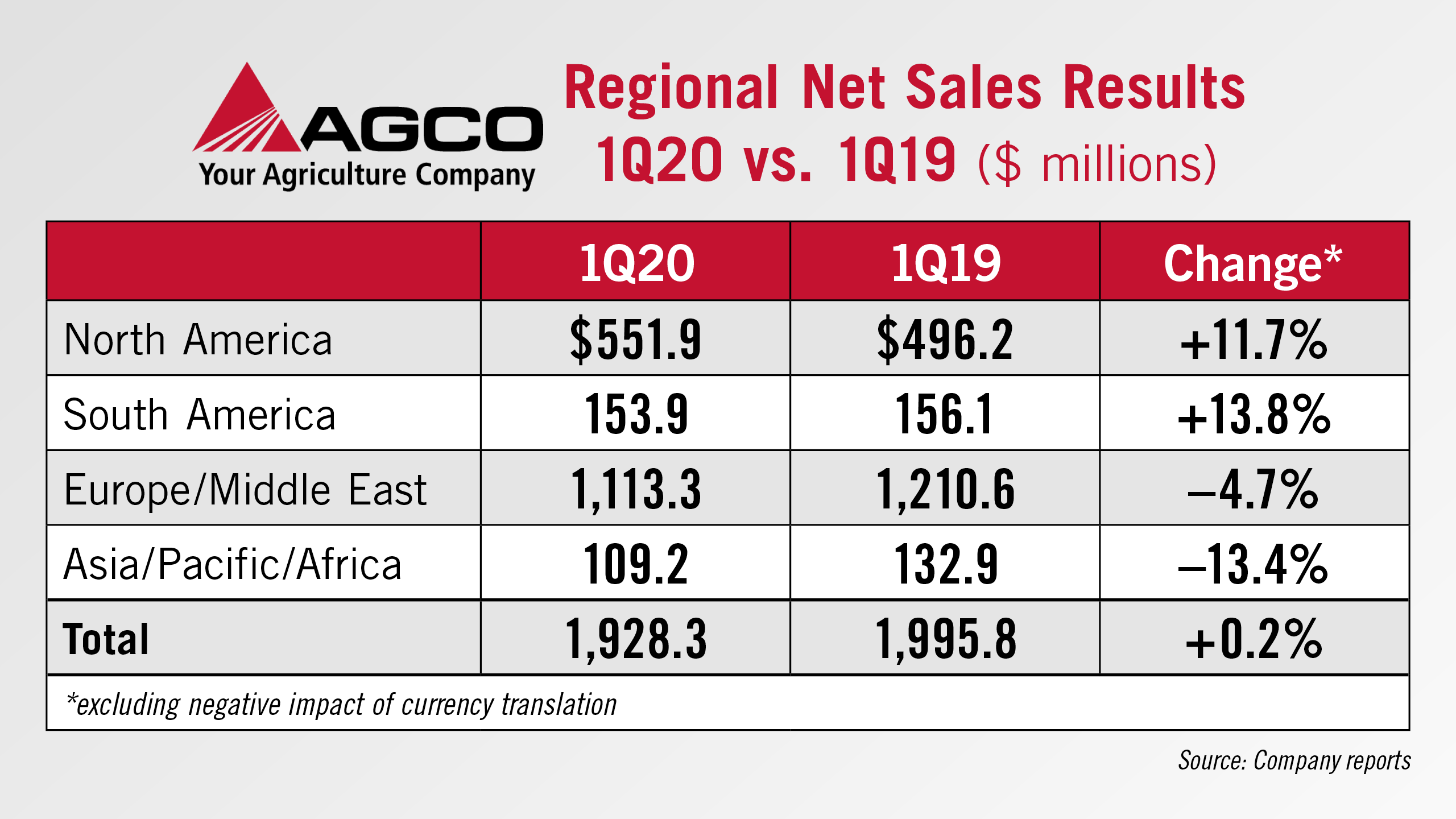 North American net sales increased 11.7% in the first quarter compared to the same period of 2019, excluding currency translation. Increased sales of high horsepower tractors, Precision Planting equipment and hay equipment accounted for most of the increase.

Net sales in the South American region increased 13.8% in the first quarter as well. The rise in sales reflects low levels of industry demand and company production in the region.

AGCO’s Europe/Middle East region net sales decreased 4.7% in the first quarter, driven primarily by lost production caused by the COVID-19 crisis. Results were also impacted by lower sales in the UK, Scandinavia and France but were partially offset by increased sales in Germany.

Net sales in the Asia/Pacific/Africa region decreased 13.4% in the first quarter, with the weakest sales in Africa and Asia.