By Charlie Glass posted on November 12, 2021 | Posted in Analysis & Commentary 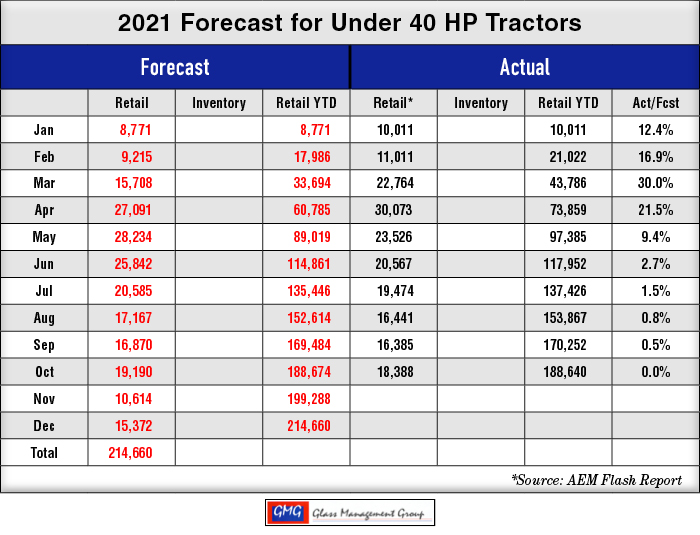 40-99 Horsepower Tractors – Retail sales were 92 units below our monthly forecast and 3,923 units or 6.6% above our year to date forecast. 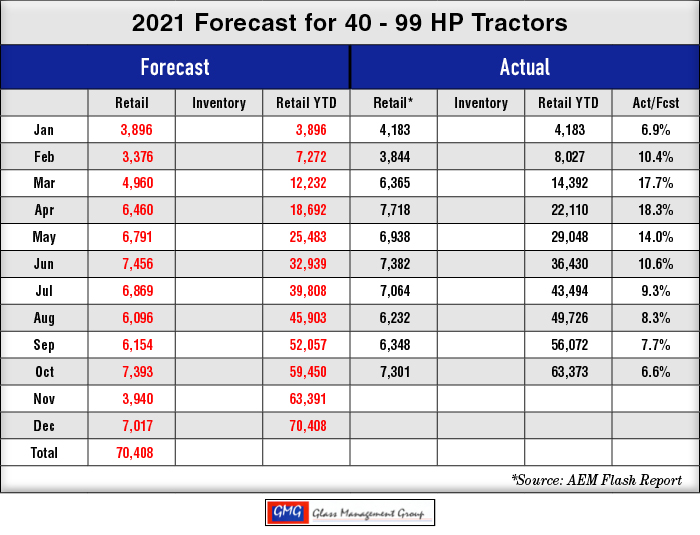 100+ Horsepower Tractors – Retail sales for these larger tractors was 447 units above our monthly forecast and 3,709 units or 23.1% above our YTD forecast. 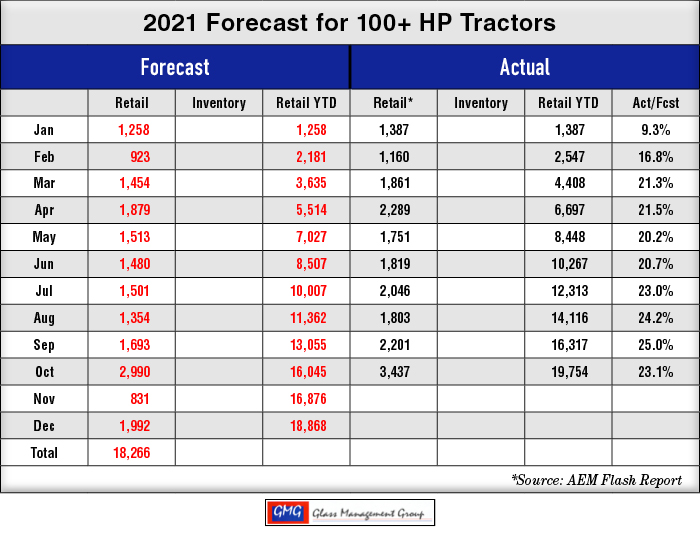 4WD Tractors – Retail sales for these largest tractors was 10 units below our monthly forecast and YTD retail sales exceeded our YTD forecast by 427 units or 16.6%. 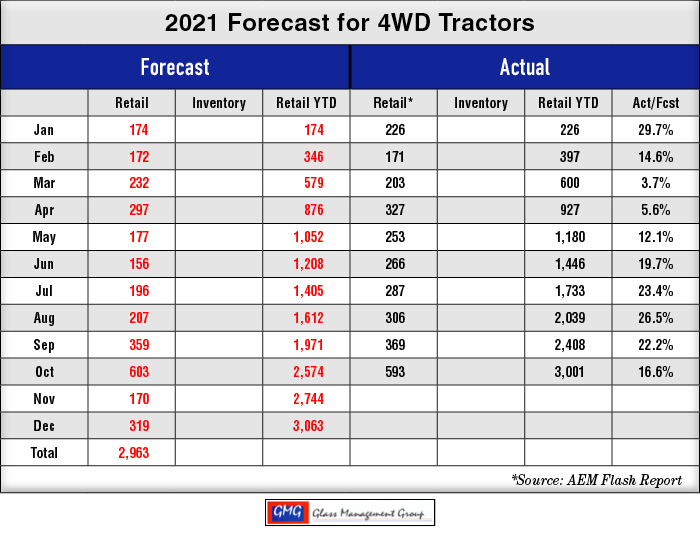 Combines – Retail sales was a phenomenal 386 units above our monthly forecast and that pushed the YTD sales 716 units or 15.3% above our YTD forecast. 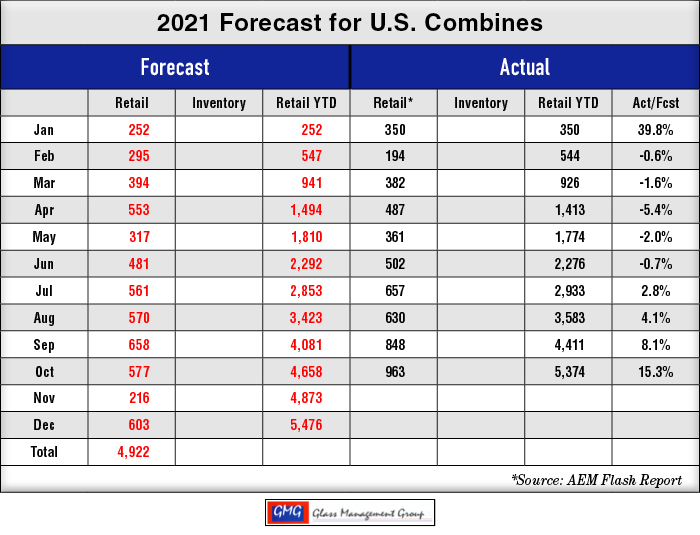 What Does the Future Hold?

The Purdue/CME Group’s Ag Barometer Index registered yet another pullback in farmer’s confidence in the current agricultural environment and what the future might hold.   The greatest concern was the rapidly increasing costs of planting next year’s crop and the profit squeeze that grain farmers could be facing in 2022.  More than half of those surveyed expected input costs to rise by 8% and one third of those farmers expected to see their fertilizer, seed, fuel and herbicides increase by 12% in the next year.

Commodity prices have struggled to maintain some stability recently and that, along with the rising cost of producing a crop, indicated that net farm income in 2022 will most likely be under some pressure as the year unfolds and that could exert downward pressure on equipment sales next year.

The U.S. Department of Agriculture’s net income forecast for 2021 remained at $113 billion and net cash farm income is set at $134.7 billion.  Both of these levels will produce enough income to fund equipment purchases in 2021 and December should see a flurry of “tax buying”, if the equipment is available.

The John Deere strike at more than a dozen plants in the U.S. could have an impact upon equipment availability in the coming months but that is a temporary situation for now.

The U.S. general economy continued to show strength as we approach a more normal business environment.  Manufacturers and other employers across the country are continuing to report difficulty in finding qualified employees for their operations and those that they are hiring have received increased compensation to entice them to join those companies.  This is another element of the growing inflation problems that the nation now faces and it probably will continue well into 2022.  This increased income for lifestyle farmers will most likely add to the current swollen demand for tractors less than 60 HP for the remainder of the year and into 2022.

The Kansas City Federal Reserve reported that banks in Region 10 have seen a dramatic rise in deposits and that had resulted in the banks’ ratio of loans to asset to decline nearly 1% over the past year even as loan numbers have increased.  Much of those funds were from the various stimulus programs from the federal government and that money is simply sitting in the banks and represents the potential to extend the current strong economy well into 2022.

Some of the largest farmers are now actively replacing equipment that should have been replaced several years ago and that can be seen in the meteoric rise in the number of units sold at retail in the larger horsepower tractor categories and in combines.

The West Coast drought has stubbornly remained even though heavy rains covered much of Washington, Oregon and northern California.  This was beneficial in extinguishing some of the large fires burning out of control in those areas but it also produce serious flooding and mudslides.  Many of the lake and reservoirs in the West continue to remain at record low levels and that is not a very positive sign for California agriculture and equipment sales.

Commodity prices have been somewhat erratic of late and corn is still showing some increase in prices while soybeans are experiencing a slight decline.  Corn exports are up 113% this marketing year according the USDA/ERS “U.S. agricultural exports, year-to-date and current months”.  Much of that increase is the result of the trade agreements with Mexico, Canada, Japan and the Phase I agreement with China.  Mexico has long been a major purchaser of corn but China has surpassed their purchases this year.

The U.S. Dollar has maintained its strength against other world currencies and while that could be construed as a negative for future export sales, the worldwide demand is strong and those nations will most likely purchase U.S. agricultural products at the present level or more, which could maintain the current commodity price levels, if not push them up.

The efforts to combat COVID-19 unintentionally brought about structural changes in employment.  Early last year many office workers were dispatched to their spare bedrooms to work remotely and the success of those efforts were surprising to both the employer and the employee.  It provided a measure of freedom for the employee who could complete their work assignments and still have ample time to pursue other activities.

We noticed this change last spring in the sudden and dramatic increase in the demand for small horsepower tractors as many of the lifestyle farmers found much more time to work on their farms.  Not only were these farms a diversion from the work-a-day world but they had now become a source of food, both animal and vegetable.  From these activities came another stream of income for some of these farmers and when the call came to return to the office there were a great hesitation and even an outright revolt in some cases.

Are we actually witnessing a resurgence of the smaller production farmer as a result of this event?

The number of midsized farms has been declining for the past forty years as more young people left the farm to find other work.  The stress of the daily grind at the office is now a fading memory and there are many who have reconsidered their future plans and realized that living and working on the farm is not a bad life - and you can see it on their Youtube channel.