In this week's episode, we cover Titan Machinery's strong second quarter of fiscal year 2022, which saw revenues increase 24.4%. In the Technology Corner, Michaela Paukner shares a close look at 360 Yield Center's 360 RAIN autonomous irrigation system. Also in this episode, the Ag Economy Barometer shows farmer sentiment recovered slightly in August, Raven Industries' Senior Director of Global Sales Sarah Waltner shares some opportunities for the technology company after its acquisition by CNH Industrial closes. Finally, Ben Thorpe takes a look at the latest forecast for net cash farm income, which is estimated to be up 17% in 2021.

Titan Machinery reported its revenues  for the second quarter of fiscal year 2022 increased 24.4% to nearly $378 million from about $303 million during the same quarter last year. For the first half of the year, revenues were up about 22% to $750.3 million. 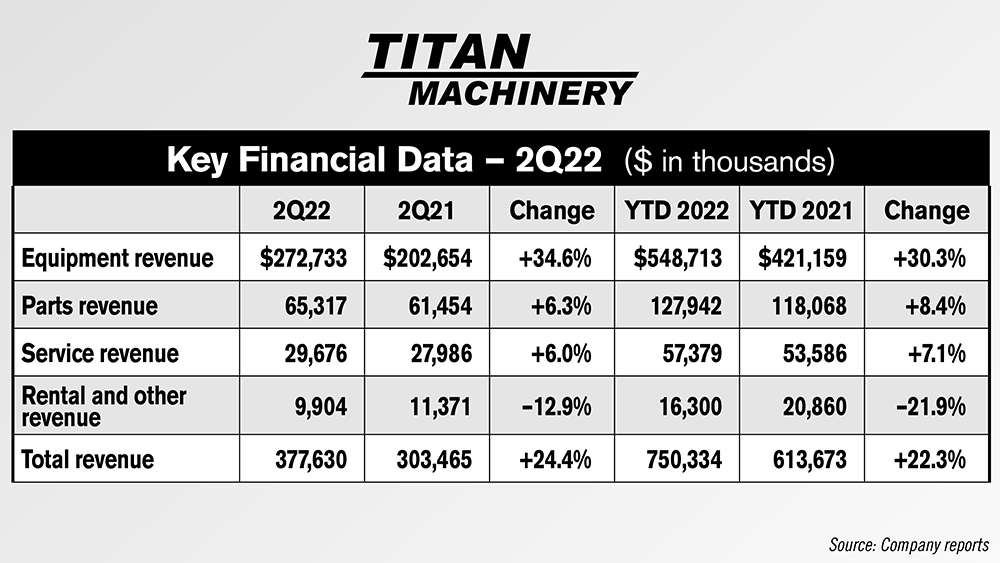 This week’s Dealer on the Move is Marshall Machinery.

The Honesdale, Pa., based Kubota dealership has acquired Goodrich Implement in Johnson City, N.Y. This adds a 5th locations for Marshall Machinery.

Gregg Sauder, president of 360 Yield Center, demonstrated the 360 RAIN autonomous irrigation system at the 2021 Farm Progress Show in August. The technology follows an RTK path created by a planter and delivers water, nitrogen and micronutrients directly to the base of the plant.

“What we're talking about is a completely new way to farm,” Sauder says. “We're saying what if we were able to time technology to come in and water a half inch a week? And not only just add water, but add nitrogen and micronutrients. So we're really excited about this technology.

“Very simply, it follows the planter. The planter creates an RTK path, and our 360 Rain comes in and follows that path exactly. We're watering at the base of the plant. We have nitrogen pumps and micronutrient pumps soak up that water stream. And then in the future, within the next six months, we're going to be doing a manure injection in that water stream.”

The 360 RAIN machine operating at the show had 3,000 feet of hose on it, enough to cover at least a 160 acre field. Sauder said it's designed to put on a half inch of water a week at the base of the plant.

“That's totally different than the requirement that you would see through a pivot that's putting water in the air,” Sauder says, “so the fact that we're banding it next to the root, you got to take it times 2. If we're putting a half inch next to the root, once a week, that's really equivalent to an inch of water.”

360 Yield Center provides the technology to create the paths used for the map 360 RAIN follows. The equipment goes on the center of the planter, and paths are uploaded directly to 360 Yield Center’s Cloud account. The map is sent back the same day, allowing the farmer to start 360 RAIN within a day of planting.

“I want it to be that way because if rain comes in and crusts that soil surface, I want to be able to soften it with the rain unit,” Sauder says. “The GPS RTK is our own, and it's really not compatible with others in the industry for reasons. It's simple, and (we) want to be in a closed system so that we know we have the kind of path generation we need. Plenty of science has gone into all the geo-fence and safety. There are probably six different steps for safety to keep our RAIN unit in a safe position in every field.”

Sauder says there are currently 6 360 Rain Units running in Illinois. Next year, the company plans to have 10 prototypes and a beta running in fields around the country, and open sales will follow in 2023.

He sees more than just the technology as part of 360 RAIN’s future.

Farmers’ sentiment improved slightly in August compared to July as the Ag Economy Barometer rose four points to a reading of 138, vs. 134 a month earlier. 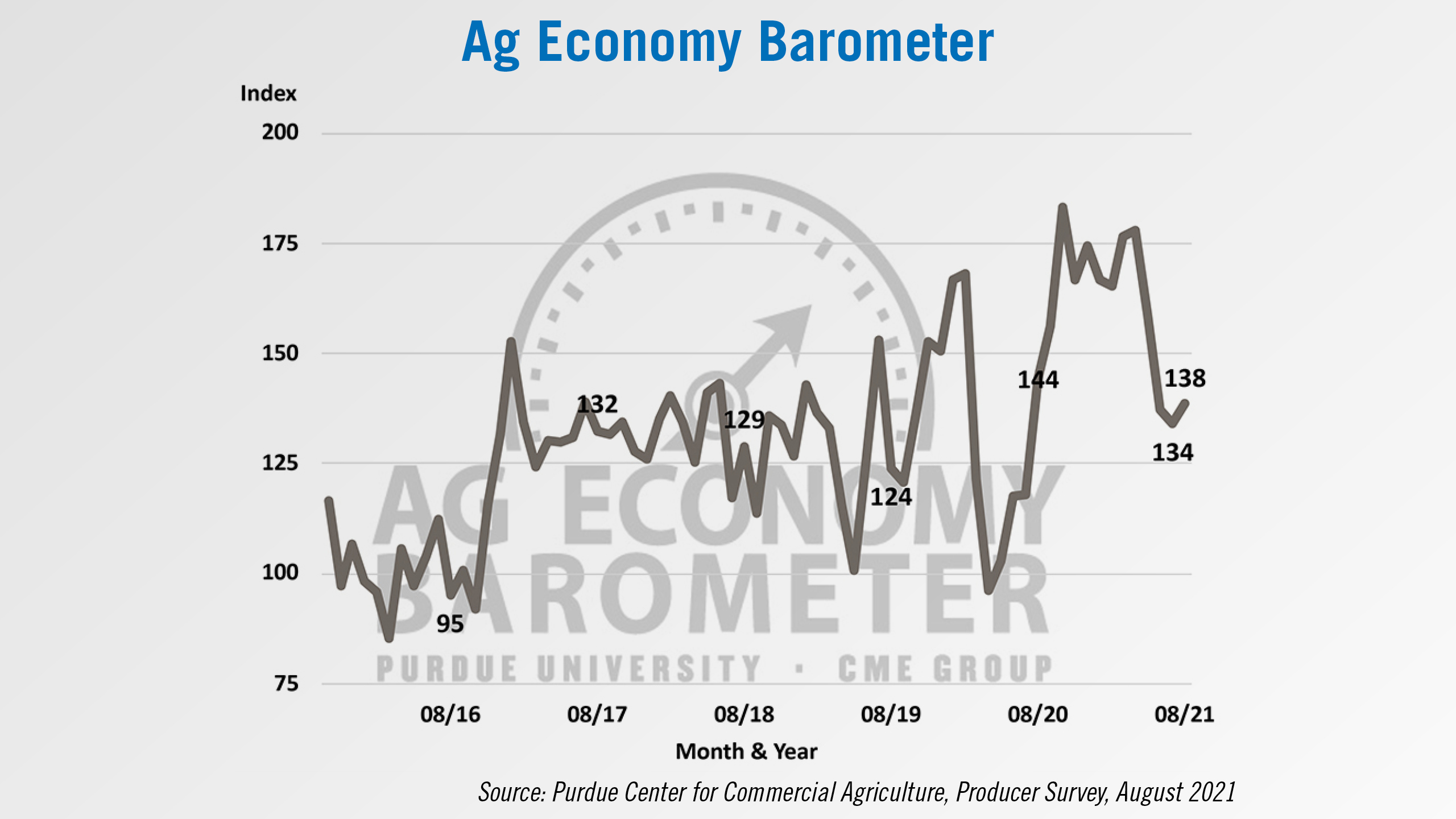 The modest rise in the barometer was primarily attributed to an improvement in the Index of Current Conditions, which climbed 9 points to 152, while the Index of Future Expectations rose just 2 points to 132. Although the barometer and its two key sub-indices improved in August compared to July, all three indices remain well below the very positive sentiment readings posted this past spring. 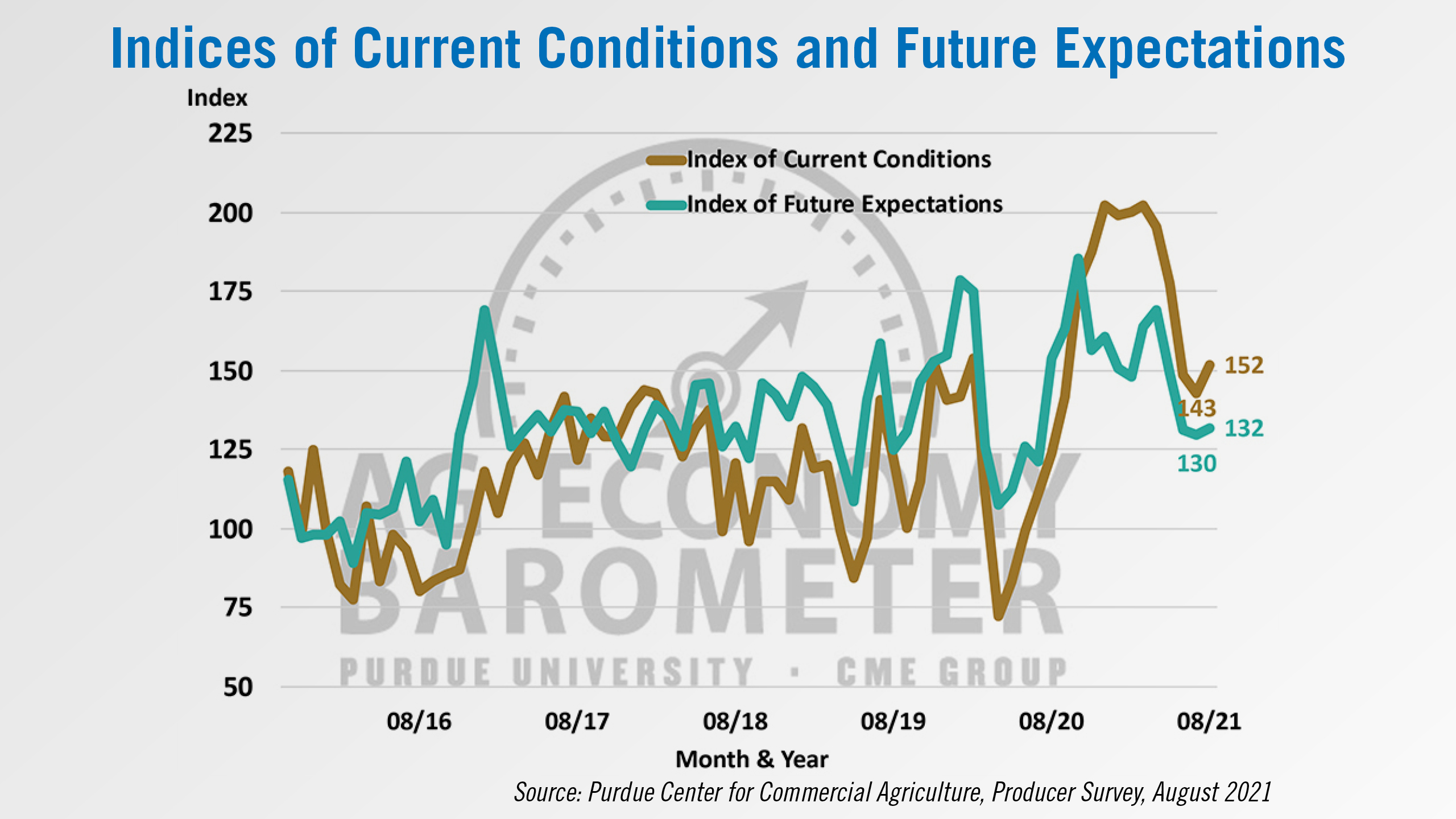 The improvement in the Current Condition Index was tied to producers’ more positive view of their farms’ financial situation. The Farm Financial Performance Index rose 11 points to 110, its highest reading since May, as farmers indicated they expect profitability this year to be better than a year earlier. 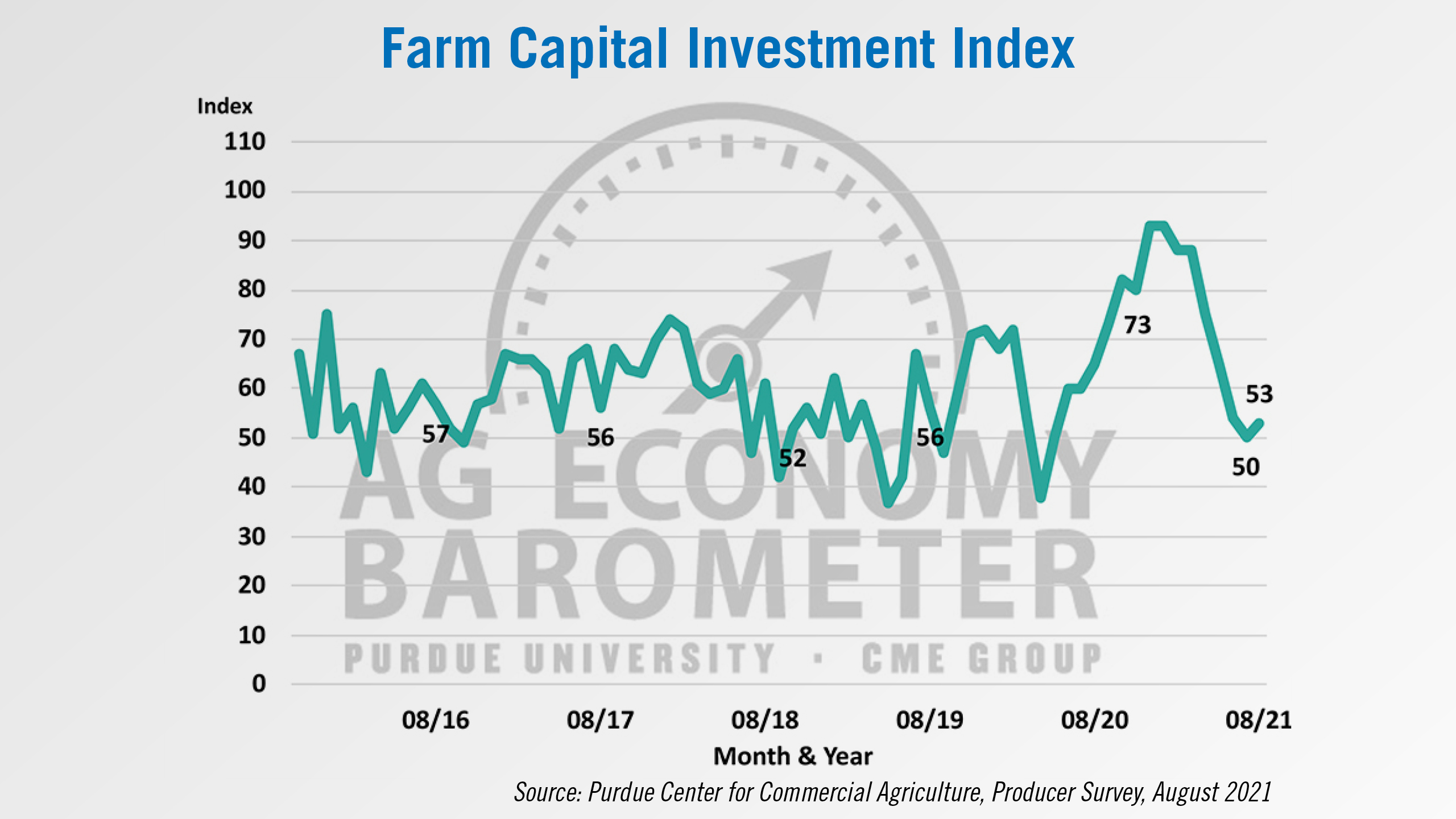 The Farm Capital Investment Index improved modestly in August, rising to a reading of 53, up 3 points compared to July. The small improvement in the index could be traced to fewer producers in August saying they planned to reduce their farm construction activity compared to a year ago. At the same time, farmers said their machinery purchase plans were unchanged from those reported in July. Industry reports continue to suggest that supply chain challenges are hampering farmers’ machinery purchase plans. 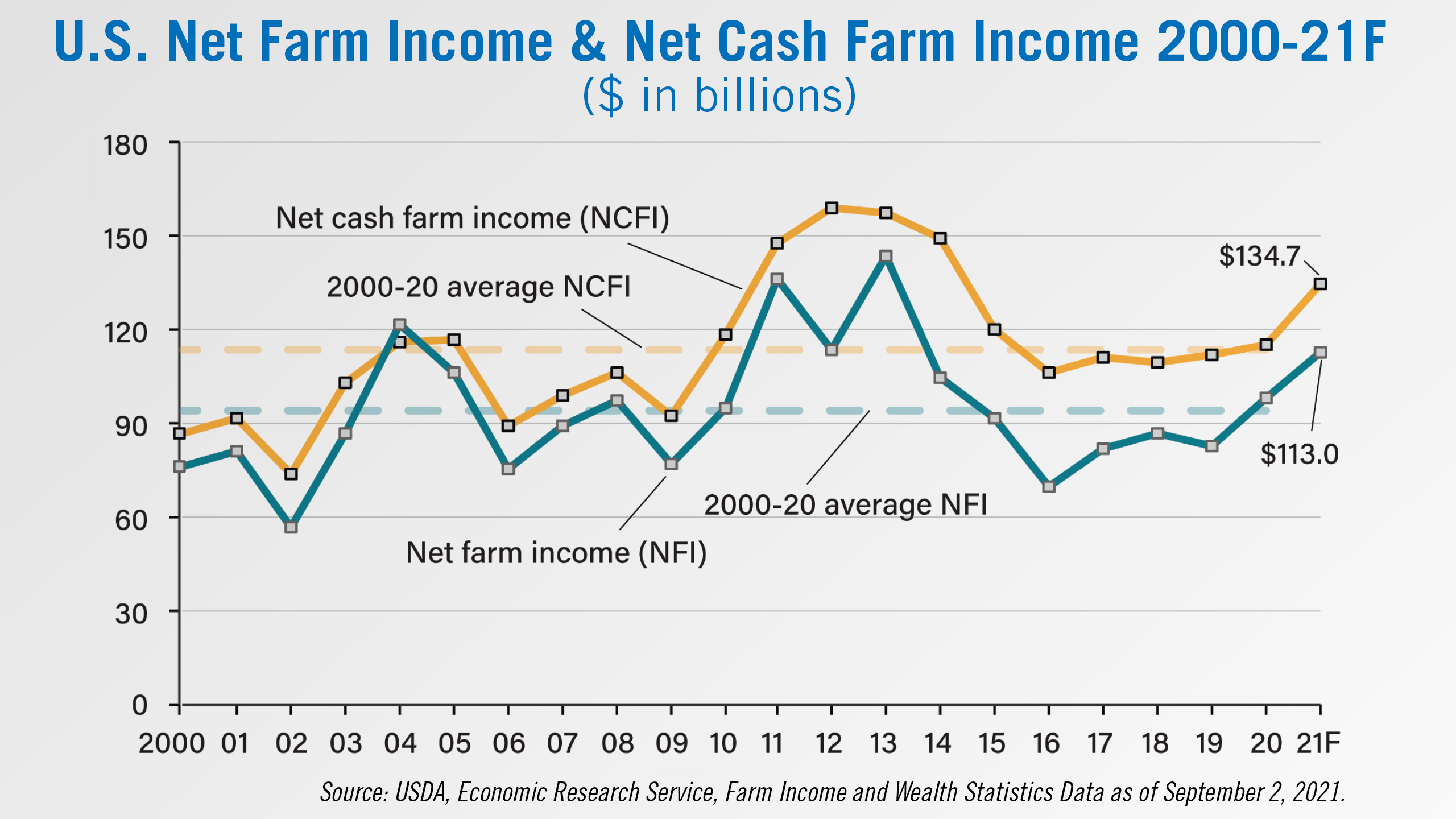 Underlying these forecasts, cash receipts for farm commodities are projected to rise by $51 billion or nearly 14% in 2021, their highest level since 2015. Production expenses are expected to grow by almost $13 billion or 3.5% during the same period, somewhat moderating income growth.

Direct government payments to farmers are expected to fall by $19 billion or 41% in 2021 compared with 2020’s record high payments, largely caused by lower anticipated payments from supplemental and ad hoc disaster assistance for COVID-19 relief.

In a recent interview with Raven Industries Senior Director of Global Sales Sarah Waltner, Waltner gave context to the opportunities Raven will see after its acquisition by CNH Industrial closes. She mentions both Raven’s potential to integrate its technology more directly into machinery platforms, as well as increase its presence internationally, particularly in Asia.

“Some of what this does for us is we’re able to get technology into regions of the world where we aren’t as present today. We are present, but not as present. It enables us to get onto more platforms than maybe we are a lot today. And also I think as you think about bringing autonomy and further levels of automation, there’s a lot that happens that has to interact between the platform, where it’s a tractor, an OMNiPOWER, a combine, a sprayer, whatever it is. There’s so much interaction. That’s not to say that we can’t have stuff in the aftermarket, we do in aftermarket and we plan to continue to, but there are areas where it does set us up better to be on platform, especially as we get more and more automated as we go to the future.

Additionally, when asked about a recent report from Argus Leader about CNHI planning to “double or triple” the staff in Raven Industries’ applied technology division in Sioux Falls, S.D., Waltner couldn’t confirm the numbers but said there were plans in the works to see “more and more” investment come into the company’s Sioux Falls headquarters.