In this week’s episode, we look at Titan Machinery’s strong third quarter results for fiscal year 2022, and how the executive team views inventory turns heading into next year. In the Technology Corner, Michaela Paukner talks with Mani Iyer, CEO of Soletrac, about the electric tractor manufacturer’s distribution plans. Also in this episode: a look at how the UAW strike impacted margins and planter deliveries and dealers’ forecast for used equipment revenues in 2022. 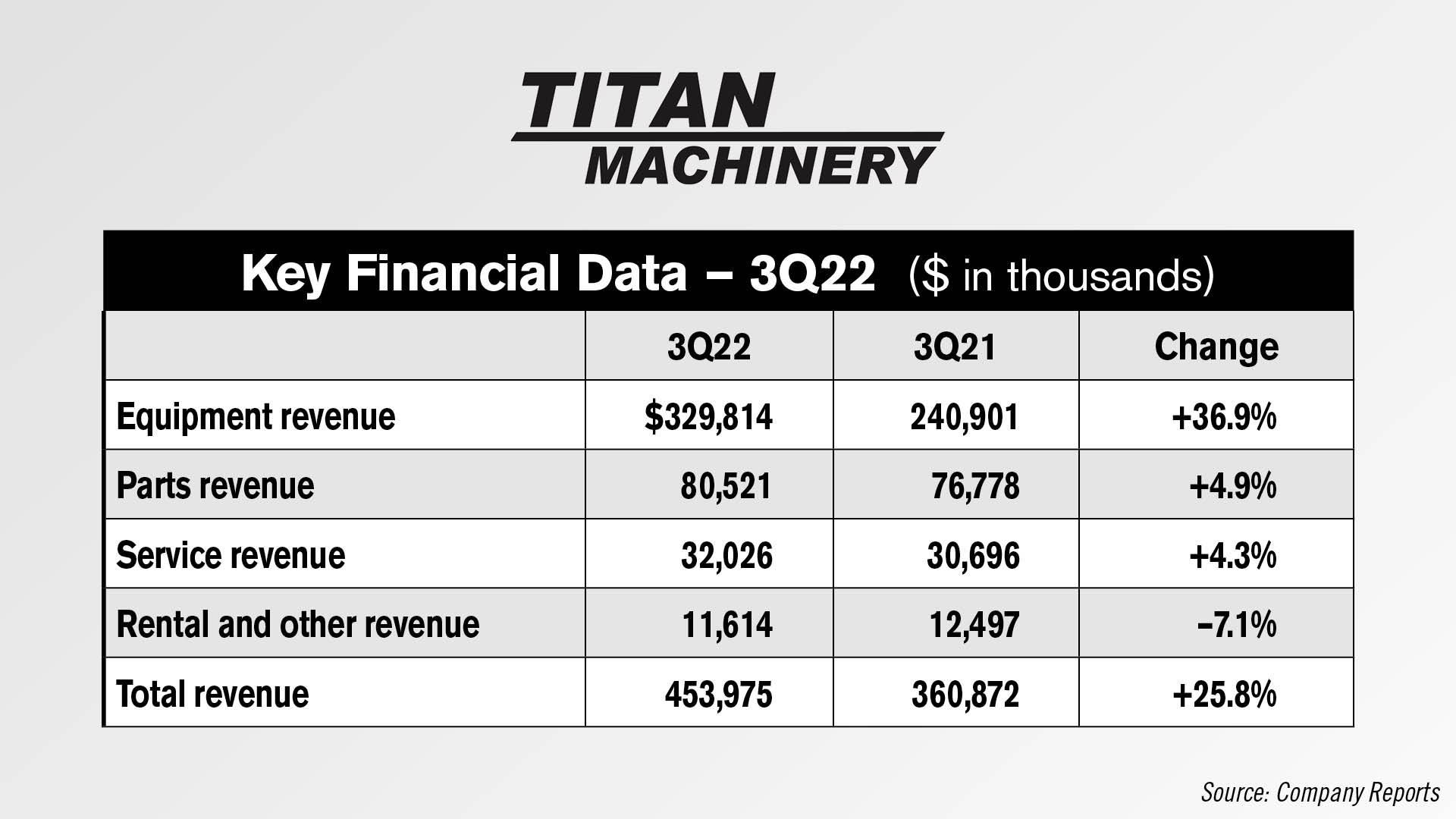 Mig Dobre, an analyst with Baird, said in a note to investors that fiscal year 2022 “has seen a sharp increase in inventory turns … management acknowledged that further increases in FY23 are unlikely, especially given the Q4 exit rate of about 3.5x, with lean inventories and turns maxed out.” 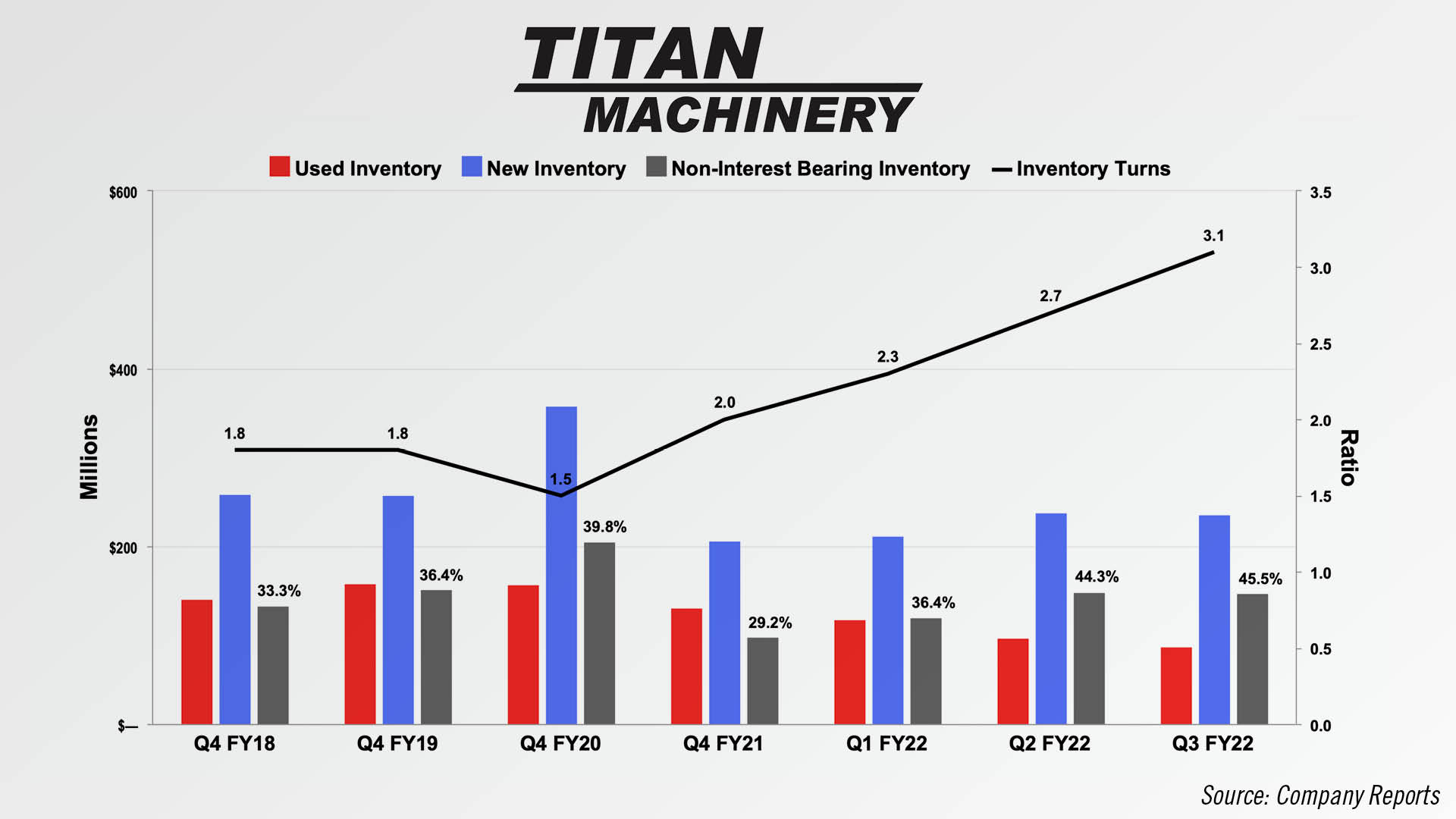 He adds that the ability to drive topline growth in fiscal year 2023 will be driven by OEM production rates, rather than factors Titan can directly control.

Titan CFO Mark Kalvoda said given the tightness of supply, a lot of units are pre-sold and once they come in they are going right out to a customer.

Kalvoda also said Titan has “made a lot of good inventory management improvements over the years. And I think that is helping our margins today, what we're achieving in equipment margins. So, even coming into this stronger cycle, we had very healthy inventory conditions with aging of inventory being down and fresh inventory out there.”

This week’s Dealer on the Move is RDO Equipment. The John Deere dealer announced that its three Australian dealership groups — RDO Equipment, Vermeer Australia and Vanderfield — will now be known as RDO Equipment. This action will bring together 29 branches and over 800 staff as one team, focused on the success of its customers across the agriculture, construction and forestry equipment sectors.

Solectrac, a California-based company that manufactures 100% electric tractors, is reimagining the traditional tractor dealership model as it prepares to introduce new models in 2022.

The tractors run on lithium ion battery packs, which can power the machines for up to 6 hours. They also have a patented exchangeable battery pack in place of the front weight to double the range. The tractors are currently manufactured and assembled in Santa Rosa, California.

Benefits of these 100% electric machines include zero emissions, full torque at 0 RPM, low maintenance, and five times the efficiency of diesel tractors. Mani Iyer, CEO of Solectac, says the price averages 20-30% higher than traditional tractors, but the total cost of ownership is paid back in 2 years.

Iyer says the company is using a hybrid sales model. It sells to dealers and direct to customers, but dealers still play an important role in those direct-to-customer sales. Solectrac may have a dealer send stock to a nearby customer who ordered directly, or if the dealer doesn’t have stock, Solectrac will send the tractor directly to the customer, while still compensating the local dealer.

“We are not following the traditional tractor model of putting hundreds of dealers across a very limited area of coverage and competing with each other and dropping the margins and not being very profitable. We are not going to go that route. We will go the route of having fewer dealers with a large area of responsibility so they have room to grow. And we have direct customer sales, which will fall under the dealership for service support, so thereby dealer has got a wide area to grow the market. We'll have a maximum of two to three dealers per state having a wide area of responsibility, thereby having probably a hundred dealers.”

Solectrac will begin recruiting dealers in January, focusing first on California and the West Coast before expanding into other regions in North America.

Iyer says the company is open to recruiting all kinds of dealerships to sell its tractors — from rural lifestyle to RV to car dealers. What’s important to Iyer is that the dealership has a good standing in the market, good serviceability and good business sense.

To learn more about Iyer’s business strategy and vision for the future of Solectrac, check out our extended coverage at Ag Equipment Intelligence dot com.

In the earnings call for its fiscal year 2021 earnings report, John Deere execs shared details of the recent UAW strike’s financial impact on the company. Director of Investment Relations Josh Jepsen said, “Over the six-year contract, the incremental cost will be between $250 million and $300 million pretax per year, with 80% of that impacting operating margins.” He adds that Deere expects equipment operations for the coming first quarter to be unchanged year-over-year, as “missing a few weeks plus of production will neutralize some of the benefits … of ramping up to higher line rates in December and January.”

Jepsen goes on to say, “All in, we expect first quarter margins to be mid- to high single digits for the equipment operations, with those businesses that have been most affected by the delayed ratification to be below that average.

“Looking beyond the first quarter though, we do expect margins for the rest of the year to be more favorable and incrementals more in line with historical averages. Stepping back and thinking about the full year impact on margins, we'd say it will be about one point lower as a result of a combination of work stoppage and some of the supply disruption.”

When asked about the strike’s impact on planter deliveries, President of Production & Precision Ag Cory Reed said the company is confident about delivering planters, saying Deere has “a production plan that's commensurate with what our early order program is.” He added that Deere has made sure it could “surge components into its planting lines as people are coming back [to work].”

Positive outlook among dealers on used equipment revenue rose slightly in this year’s Dealer Business Outlook & Trends report, but also saw an increase in negative forecasts. Some 49% of surveyed dealers forecast at least a 2% increase in used equipment revenue for next year, up slightly from 47% in last year’s study. The percentage forecasting an 8% or more increase in rose from 8.7% last year to 17.3%, the highest percentage recorded in the last 5 years. 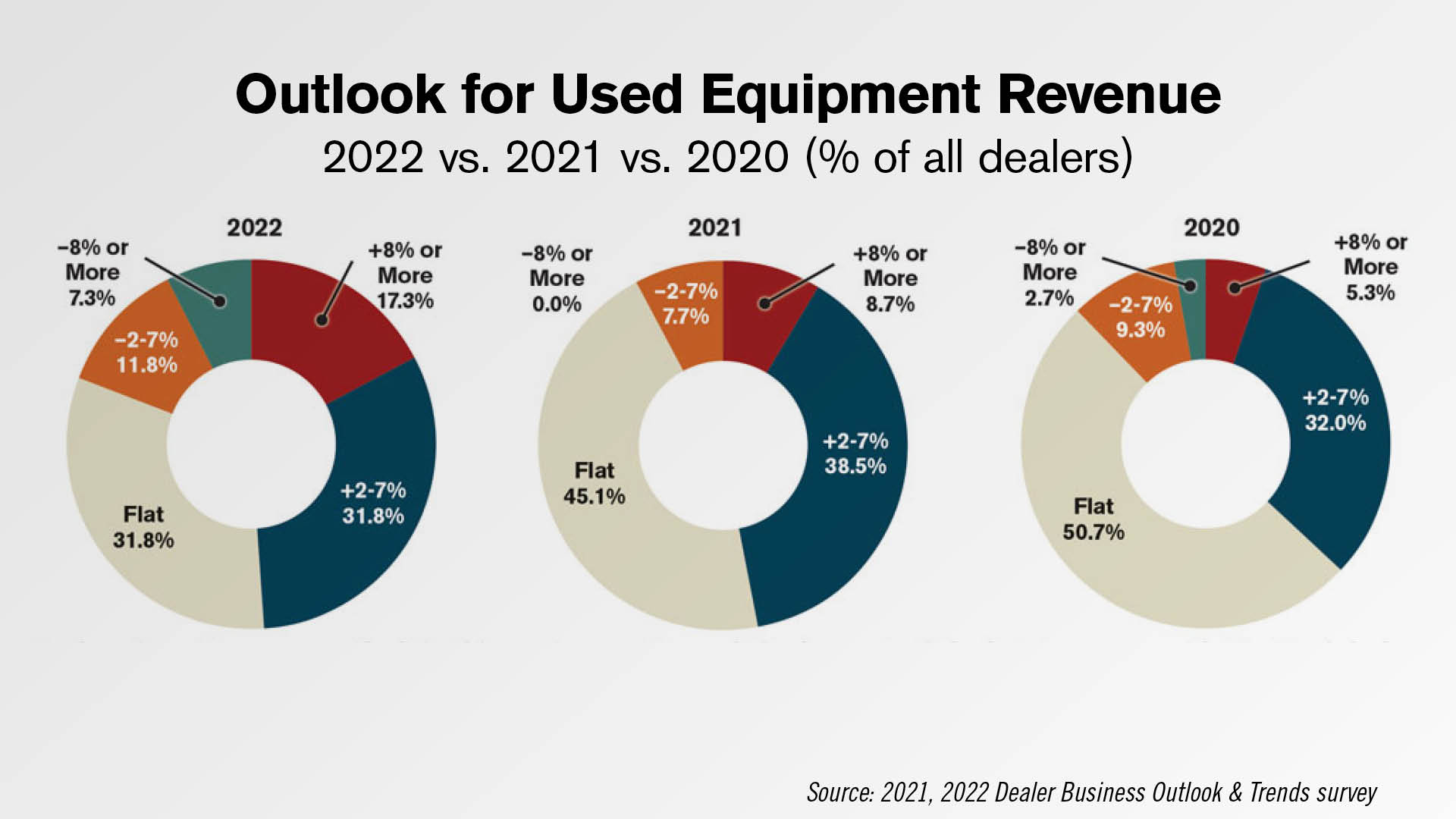 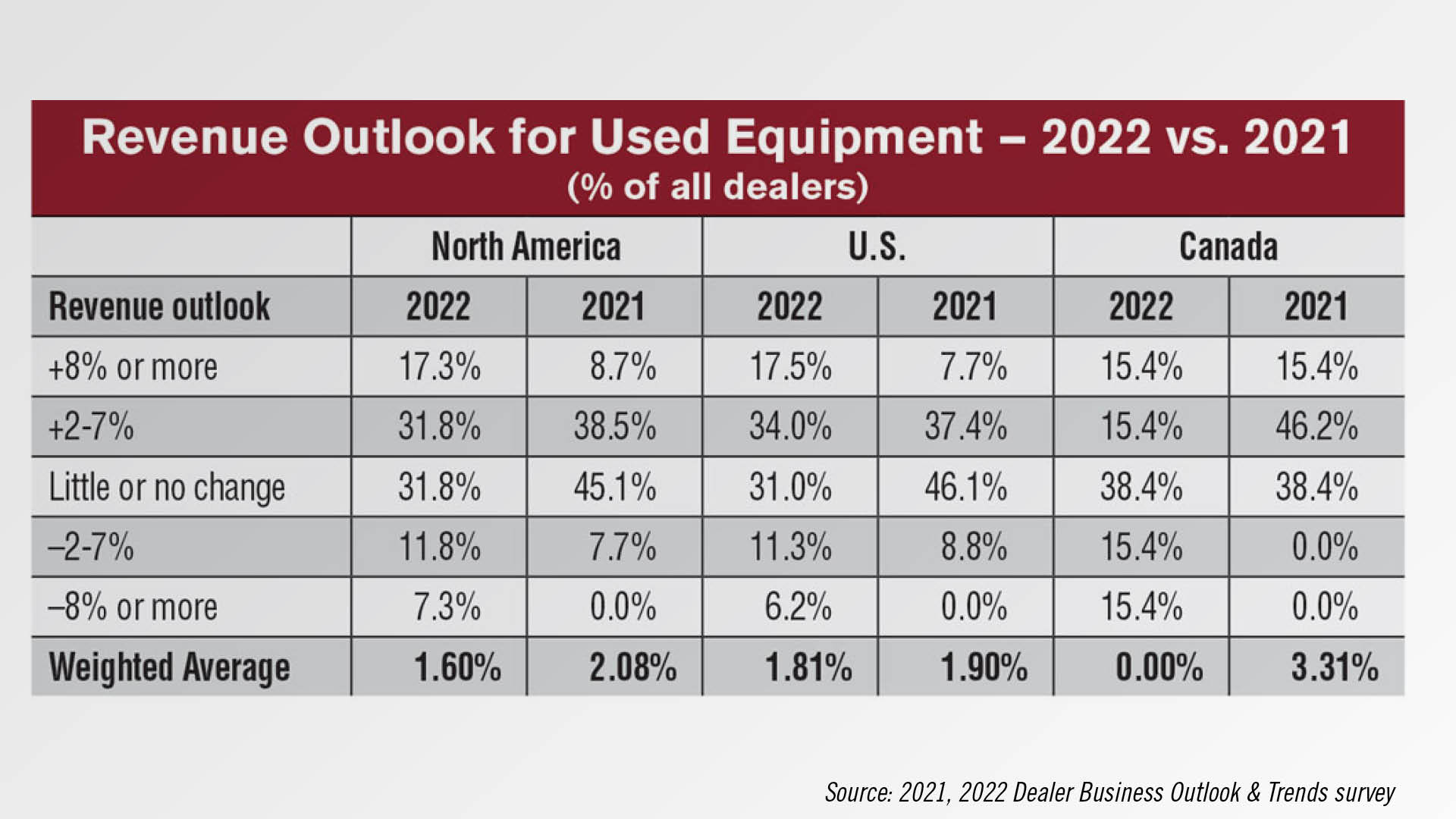