The latest episode of On the Record is now available! In this week's episode, Titan Machinery released its first quarter earnings for fiscal year 2022, with all segments reporting growth except for the rental and other division. This week's Dealers on the Move include Torgerson's, Hutson Inc. and Atlantic Tractor. Associate Research Editor Ben Thorpe takes a look at Deere's second quarter earnings and on the battle for market share between Deere and AGCO's Fendt brand. Also in this episode, a closer look at the used high horsepower tractor market and Kubota's first quarter results. 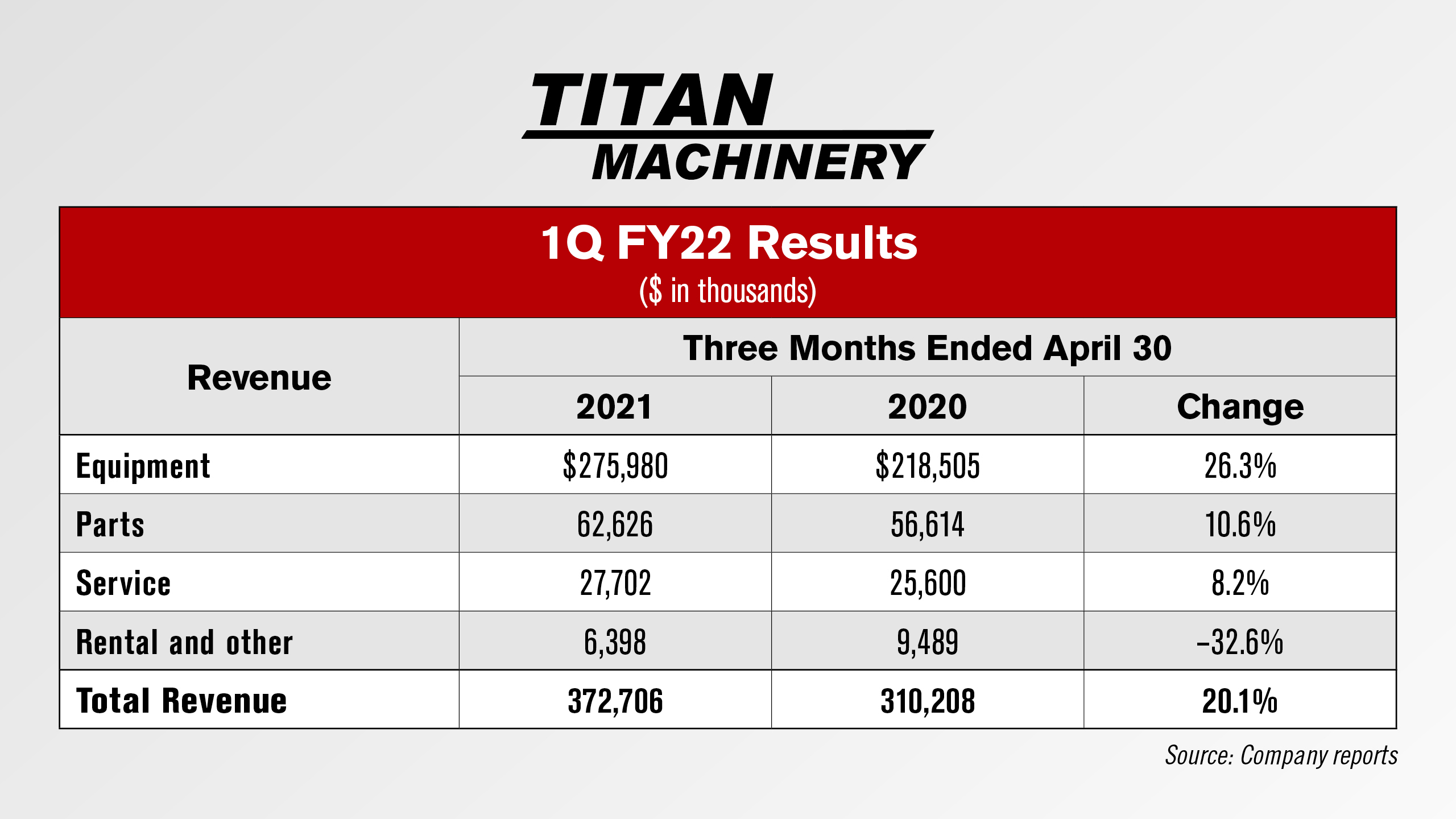 This week’s Dealers on the Move include Torgerson’s, Hutson Inc. and Atlantic Tractor.

Case IH dealer Torgerson’s announced it has added its first location in Wyoming. The new store, located in Powell, Wyo., joins the group’s 10 other locations all in Montana.

John Deere dealer Atlantic Tractor announced it will be acquiring the Finch Services’ John Deere Ag and Turf and Compact Construction Equipment contracts at the Westminster, Md., Hunt Valley, Md. and Hanover, Pa., locations on or about June 1, 2021. 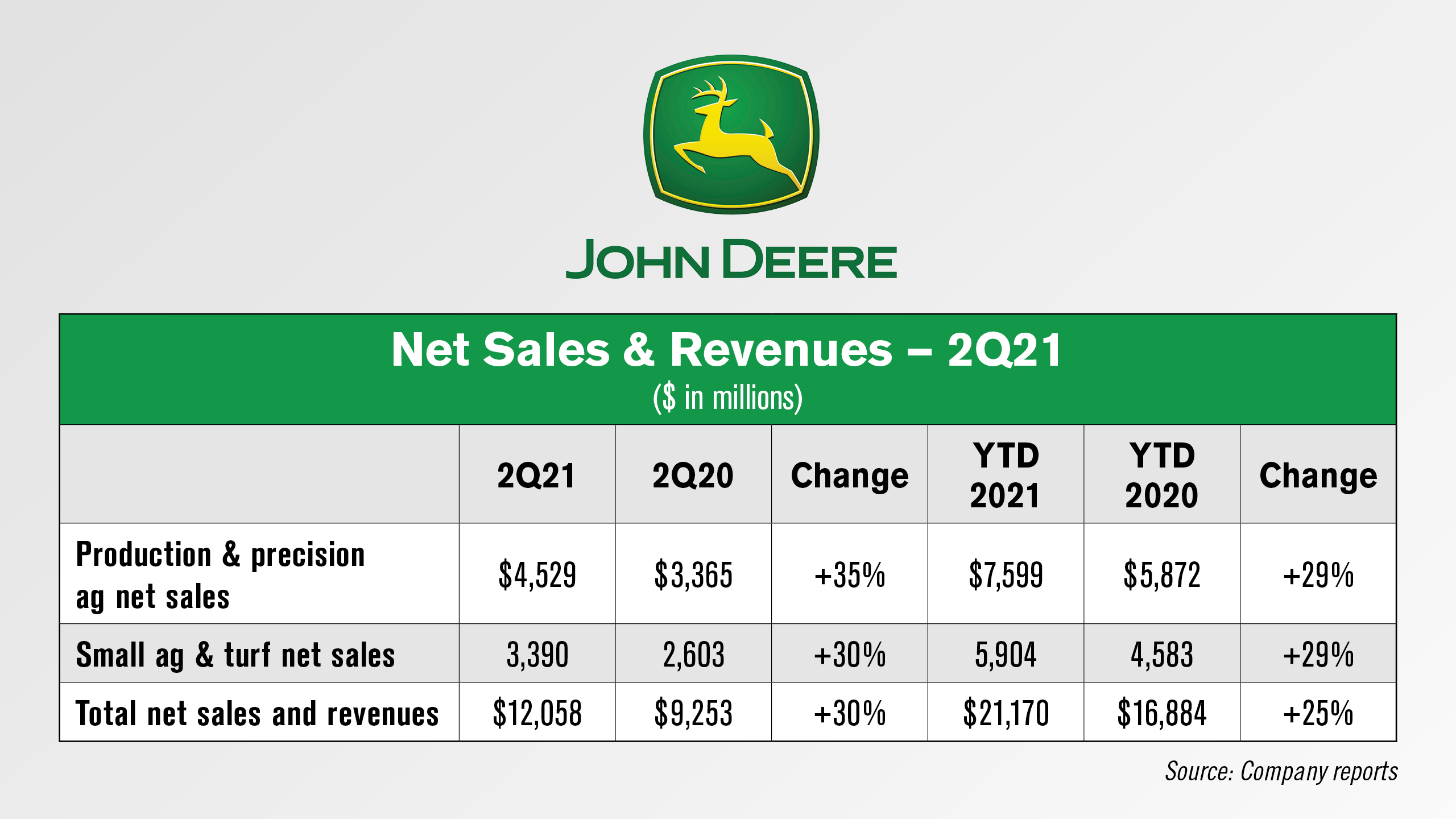 According to a tip Ag Equipment Intelligence has received, over roughly the last 6 months, John Deere has been giving some Deere dealers “unpublished financial incentives” to acquire Fendt tractors on trade-in. We were able to confirm the existence of these so-called incentives with one multi-store Deere dealer.

The source, an industry expert who agreed to speak under condition of anonymity, stated they had been told by several Deere dealers in the Corn Belt that the funds were being delivered in order to make up the difference on trade-ins for Fendt tractors, sometimes up to $25,000.

The individual stated that,

“The new Fendt tractor has shown sufficient market uptake, and customer interest has gotten under John Deere’s skin enough that they have been providing these incentives to dealers in order to thwart Fendt’s sales progress.”

This source also stated that Deere dealers were putting these acquired Fendt tractors up for auction at below market price in order to hurt their residual value, but we were not able to confirm this.

We reached out to Deere for comment and received the following statement from John Deere Marketing Manager Kevin Juhl.

“Manufacturer-to-dealer incentives are common in many industries, including agriculture. At times, John Deere pays dealers incentives based on the dealer’s sale of new equipment. John Deere dealers are independent businesses, and these incentives are paid directly to them. Dealers price their own used equipment as dictated by market pricing without John Deere’s involvement.”

We encourage our viewers to email us at bthorpe@lessitermedia.com if they have any comments on this topic.

In a recent webinar with Farm Equipment, Andy Campbell, marketing director at Iron Comps, broke down the current state of the used high horsepower tractor market and the potential growth he forecasts for the remainder of the year.

Campbell explains that he believes people are holding onto their used, low-hour, high horsepower tractors as the market continues to improve, calling it “behavioral economics at play.”

“300 horsepower tractors saw strong growth, 23% year-over-year growth over the 2020 1st quarter. While the growth was strong, it wasn’t as strong as what we saw on the lower horsepower range. However, as you go up in horsepower, just your rate of growth, isn't going to be quite as much.

“As you look at Q2, that really looks suppressed. What I think is going on here, is a little bit of what I talked about early on with the combines and the track tractors. I think people are holding on that inventory and it may be released here.

“I think it's behavioral economics at play and, it's a little analogous to a farmer who still has corn in the bin. Some of the savvier farmers do. You might've sold a little bit in the winter, but now you're seeing this market rise and it's got legs on it.

“There's very little chance that it's going to drop and a pretty high chance that it might continue to climb. You're not going to unload your inventory right away. You're going to wait for the sweet selling season, which for your combines that's definitely wait until August. Some may begin June or July to jump it a little bit.

“And then about the same with track tractors, wait for planting to be done with or harvest. So, my guess here is that you're going to see a lot of good volume, or I should say good machines at least to come to market this summer, in terms of how much volume is actually being backlogged and on deck ready to go, that I’m not quite sure.”

Kubota’s Ag Sales on the Rise

Kubota recently reported its first quarter revenue increased by 22.3% to $4.9 billion. Revenue from the Farm & Industrial Machinery segment were up 28.1% to $4.1 billion vs. the same period last year. 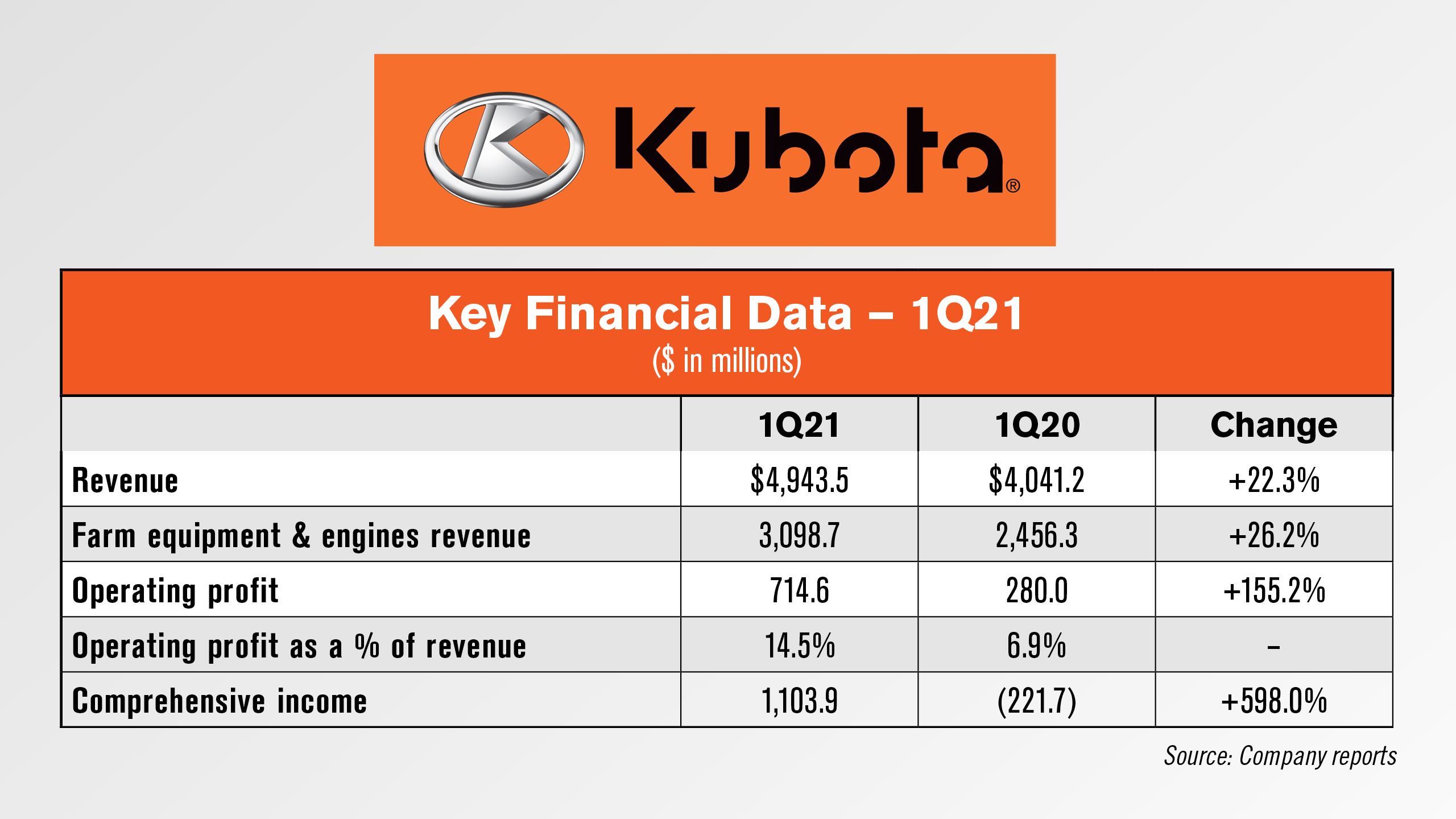 Overseas revenue increased by 31.3% from the same period in the prior year to $3.4 billion. In North America, sales of tractors and construction machinery increased significantly mainly due to strong demand along with trend in move to suburbs despite delay in shipment caused by port congestion and other effects.