The latest episode of On the Record is Now Available! In this week’s program we take a look at a recent countersuit filed by Kinze and Ag Leader against Deere & Co. in response to a patent infringement lawsuit Deere brought against the two in late 2020. In the Technology Corner, Jack Zemlicka shares how 21st Century Equipment is mainstreaming its precision department. We also take a look at both Titan Machinery and Cervus Equipment’s latest earnings report, and report on European ag machinery market sentiment.

According to court documents obtained by Ag Equipment Intelligence, Kinze and Ag Leader have filed a countersuit again John Deere, in response to a patent infringement lawsuit Deere brought against the two in late 2020.

In its counterclaims, Kinze lays out Deere’s history of acquisitions and legal troubles. This includes the Department of Justice’s block on Deere’s attempted acquisition of Precision Planting in 2015 and Deere’s subsequent 2018 patent infringement lawsuit against AGCO.

In the suit, Kinze alleges that Deere uses “market power to exclude its competitors from the planter market and deprive farmers of choice.” It also claims that Deere seeks to intimidate its opponents with cease-and-desist letters and enforces “brand purity” policies to exclude shortlines from Deere dealerships. Kinze specifically claims that Deere stops dealer mergers and acquisitions if the Kinze equipment line is not dropped. 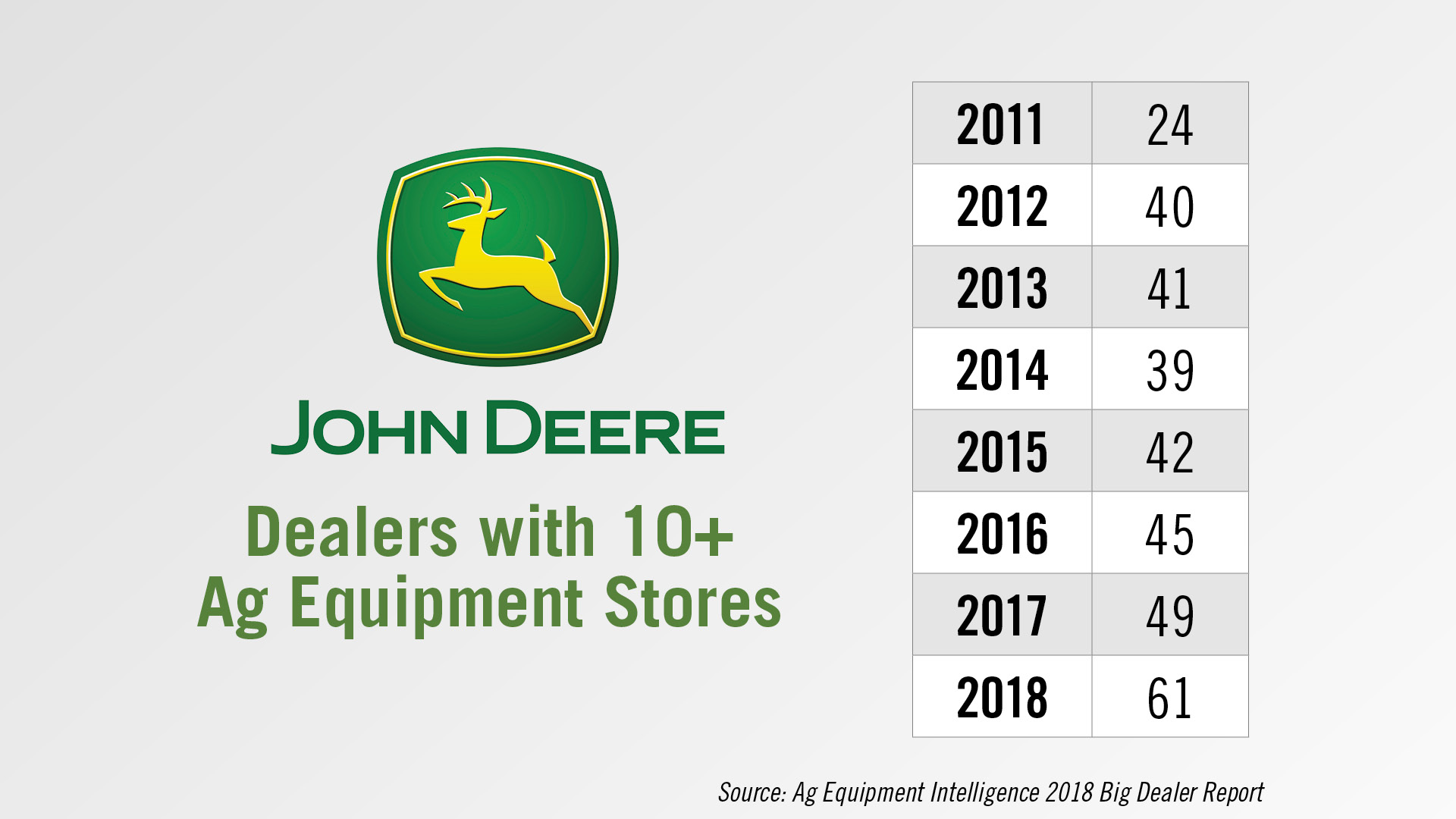 To illustrate its claims, Kinze cites Ag Equipment Intelligence’s Big Dealer Reports, including data that shows the steady increase in Deere dealers with 10 or more stores since 2011. Kinze specifically quotes the 2018 Big Dealer Report as saying, “In many cases, Deere dealers wanting to expand come under pressure to drop lines that Deere considers competitive to its own products.”

Ag Equipment Intelligence reached out to both Kinze and John Deere regarding the countersuit. Both declined to comment.

This week’s Dealer on the Move is Beverage Tractor. The Kubota dealership recently opened 2 more locations. In February, Beverage Tractor opened a new store in Blacksburg, Va., and on March 1 the dealership completed its acquisition of Collie Equipment Co. in Danville, Va.

On the cusp of spring planting in many areas, dealerships are reminded of the measurable and intangible value that an experienced precision farming team brings to the field for customers.

But the skillset possessed by a really good precision ag technology specialist is hard to find. They are in high demand and thus expensive, and they take extensive training to develop.

So why waste your rock star precision people’s truly valuable time dealing with the basics? This question led to Owen Palm, CEO of 21st Century Equipment’s initiative to broaden and deepen the pool of precision problem-solvers throughout the 16-store John Deere dealership.

With so many ag technologies becoming mainstream, Palm has the same expectation for how they should be installed, updated and repaired. Spreading the precision workload across multiple departments with defined responsibilities for each is the core of 21st Century’s effort to mainstream its precision business.

“A couple of years ago when we really started getting serious about mainstreaming our basic precision ag technology products, we made a portion of our salespeoples’ commissions at risk if they did not pass a basic proficiency exam that tested their knowledge of basic precision ag practices and equipment. Today, we have set an expectation that every salesperson can log in and walk a customer through the ops center and be conversational about its capabilities with this tool. We also have an expectation that every one of our parts specialists, salespeople, service technicians and even our support center staff know their way around a display and can set an AB line.

“Our goal is to have every employee be at least a conversational level and understand the basic difference between things like RTK vs. SF1 guidance. What does a customer mean when he talks about concepts like variable-rate or setting field boundaries? Being conversational in the fundamentals of precision ag keeps our employees relevant with their customers.”

Palm adds that the biggest reason for mainstreaming basic precision ag products to the other departments is it allows experienced ag specialists to proactively prepare for implementing advanced technologies, such as robotics, artificial intelligence and autonomy.

Titan Machinery Revenue Up 8% in FY21

Titan Machinery reported an 8% increase in revenue and a 30% decrease in inventories in its fiscal year 2021, according to the company’s latest earnings report.

Total revenue for Titan’s fiscal year 2021 increased 8% to $1.4 billion. Net income for the year was $19 million, compared to $14 million for the prior year. 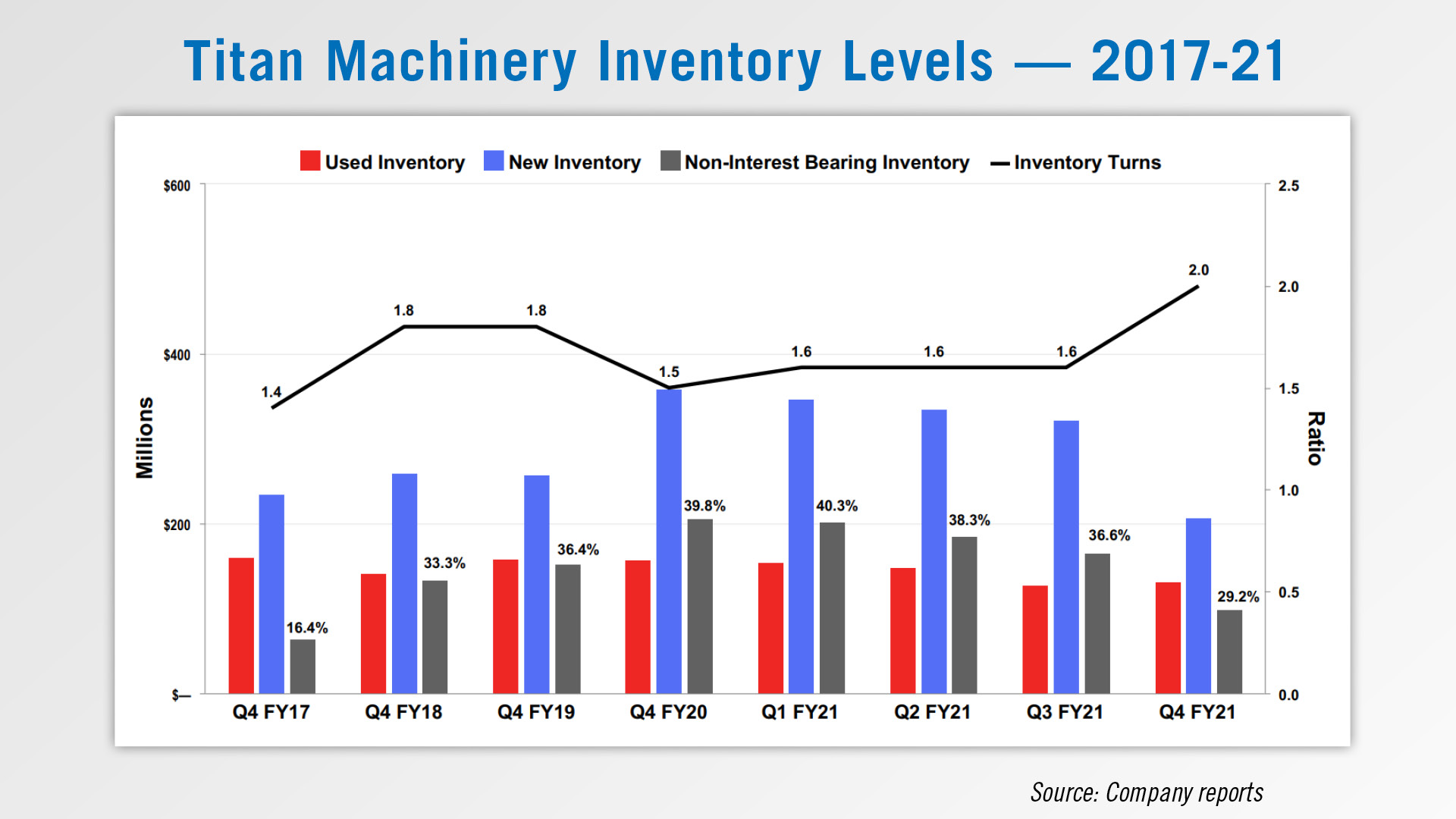 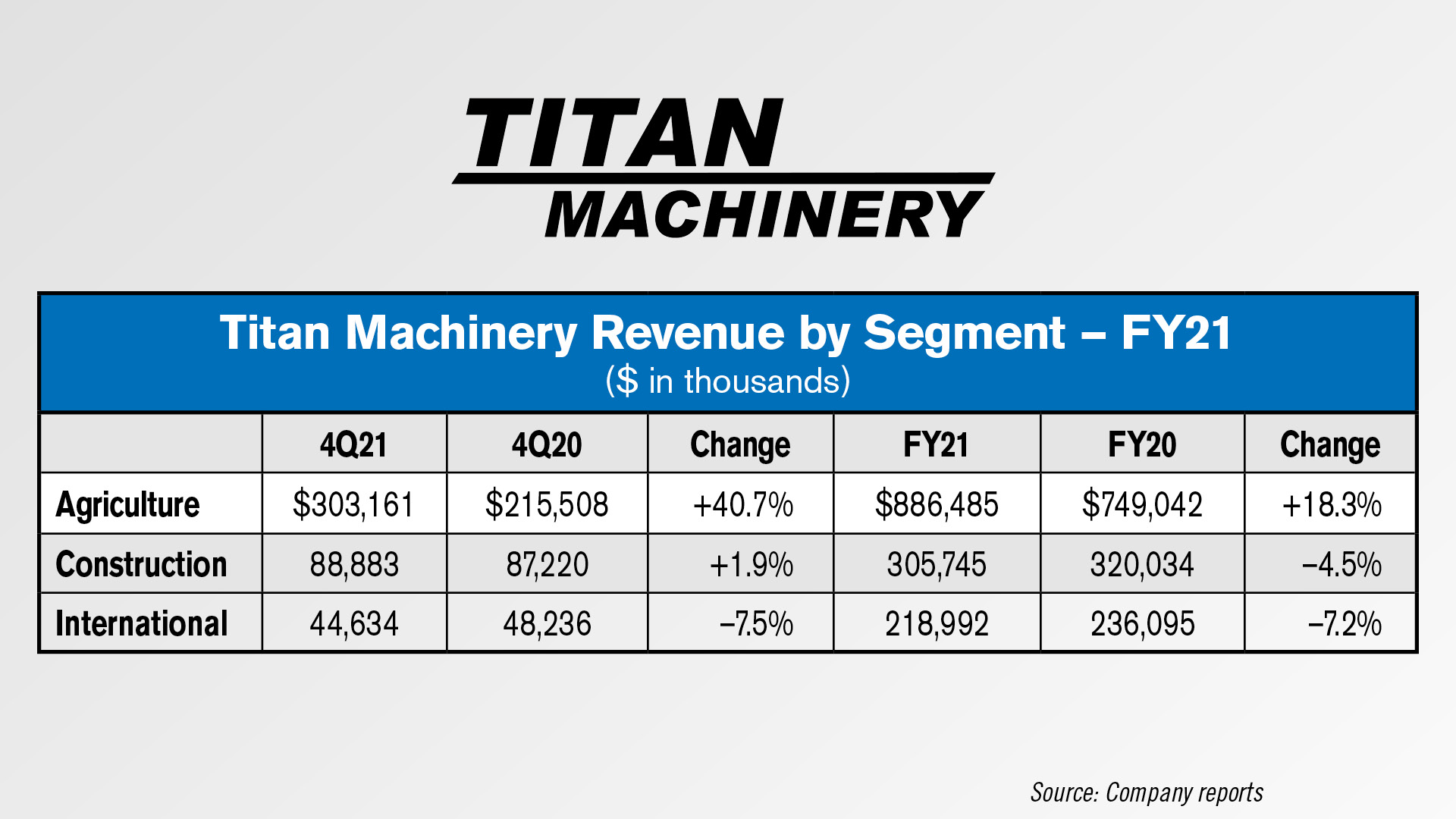 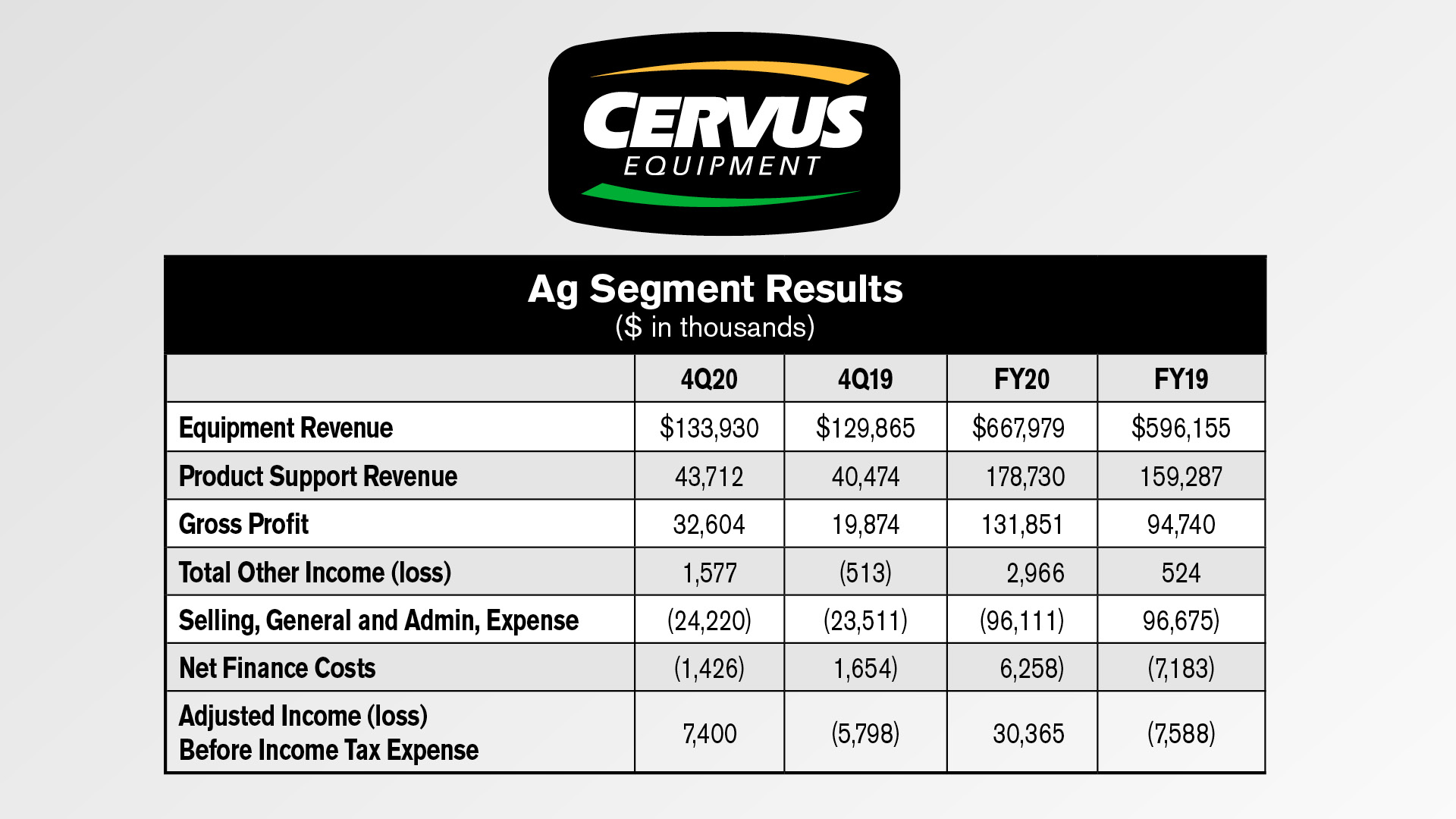 The company says the sales team aligned re-conditioned used equipment with the needs of customers through the seeding and harvest windows, resulting in used equipment revenue increasing 15%. Product support revenue increased 12% in the year, as Cervus executed on strategic parts initiatives, driving increases in over the counter, on-site and online parts revenue, and the opening of a new location in Nipawin, Sask., during the second quarter.

The general Business Climate Index for the Agricultural Machinery Industry in Europe has risen to a record high after having reached the positive range in October for the first time since mid-2019. In March, the index is at +60 points (on a scale of -100 to +100). 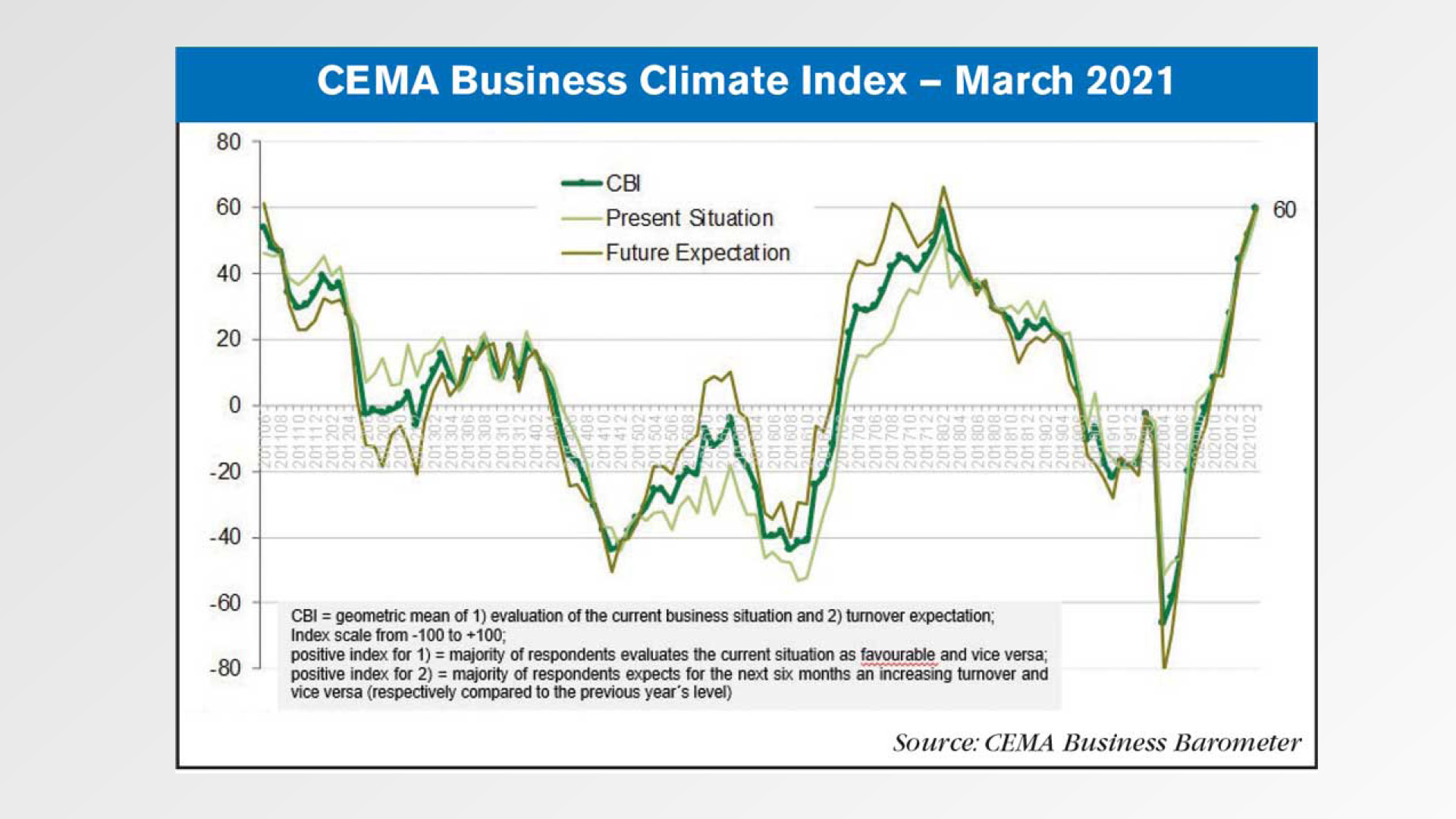 Based on a record volume of accumulated incoming orders, high levels of sales have already been secured for the coming months. Moreover, only 10% of the industry representatives expect their incoming orders to decline. Other than during previous upswing periods, such as in 2010 or 2017, the current business improvements do not lag behind improved future expectations. According to the European Agricultural Machinery Assn., “It appears that the industry is continuously adjusting its future expectations to a surprisingly well-performing current business and to an ever-increasing order intake from month to month.

Survey respondents have once again raised their expectations for most countries. The regional breakdown shows that in each single European market a majority of survey participants expect sales increases in the next 6 months. The best rating was achieved Austria, followed by France, Italy and Poland. The expectations for the individual markets are largely in line with the perceived investment needs, which are considered to be generally high with a few exceptions such as the UK or Benelux.

Looking at the full year 2021, on average the industry is forecasting sales to be up 8%, up from the 4% increase that industry representatives were forecasting in December. That growth is expected to come from Europe, North America and Oceania.