In today’s newscast we dig into the Dept. of Justice’s antitrust lawsuit against Deere and Precision Planting, an update on U.S.-made ag equipment exports, Case IH and New Holland’s venture into autonomous tractors introduced at the Farm Progress Show and new regulations for drone operation. 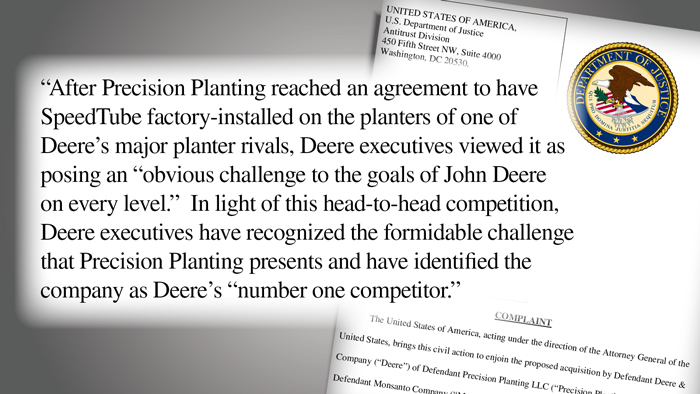 Last week while we were at the Farm Progress Show in Boone, Iowa, it was announced that the Dept. of Justice filed an antitrust lawsuit to block Deere’s acquisition of Precision Planting from the Climate Group. The deal was originally announced back in November 2015. According the DOJ, they filed the lawsuit in order to preserve competition in the market for high-speed precision planting systems in the U.S.

Referencing Precision Plantings partnership with Case IH, the complaint filed by the Department of Justice states: “After Precision Planting reached an agreement to have SpeedTube factory-installed on the planters of one of Deere’s major planter rivals, Deere executives viewed it as posing an ‘obvious challenge to the goals of John Deere on every level.’ In light of this head-to-head competition, Deere executives have recognized the formidable challenge that Precision Planting presents and have identified the company as Deere’s ‘number one competitor.’”

According to Mig Dobre, an analyst with Baird who is following the lawsuit, the DOJ calculates Deere would have at least 86% market share if the acquisition goes through. They estimate market share at Deere 44%, Precision Planting at 42%, Kinze at 12% and Horsch at 2%.

Deere and Precision Planting plan to contest the lawsuit. According to a release from John Deere, “Competition in precision agriculture is strong and growing in all of these channels as companies around the world continue developing new technologies. The acquisition will enable broader access to these advancements by ensuring farmers the choice to either buy new machinery or retrofit older planting equipment with the latest new innovations.” 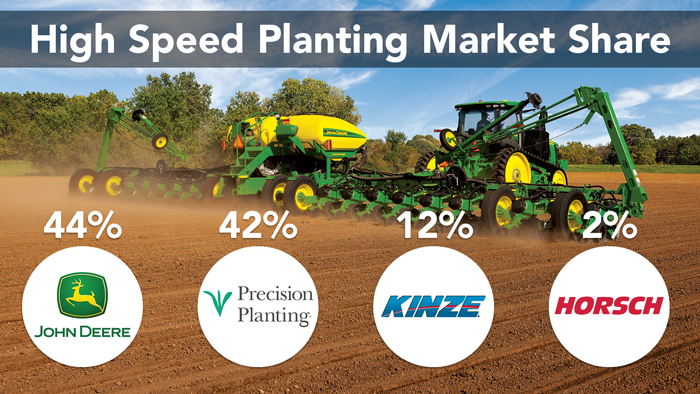 We reached out to Deere for additional comment, but they declined. We’ll bring you more details on the lawsuit as they are available.

Through the first half of the year, exports of U.S.-made ag equipment are down 12% overall compared to the first half of 2015, according to the Assn. of Equipment Manufacturers. A total of $3.54 billion worth of equipment has shipped to global markets. 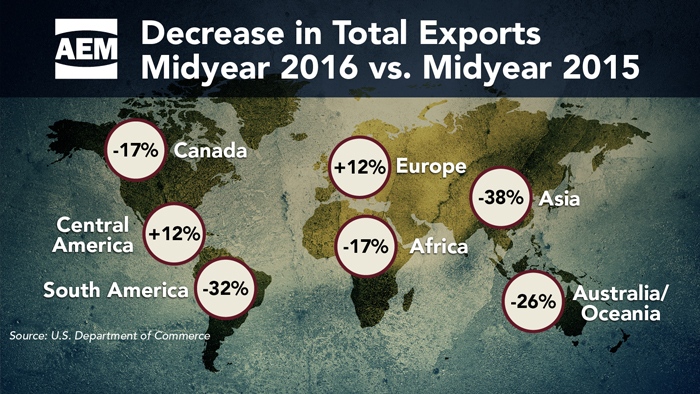 While overall exports were down, both Europe and Central America saw 12% gains. During the first half of 2016, Canada imported the most U.S. made ag equipment at $1.05 billion, which is a drop of 17%.

Exports to Africa dropped 17%, Australia and Oceania exports were down 26%, exports to South America declined 32% and Asia saw a 38% drop.

“It is important to note that while ag equipment exports might suffer due to the overall ag downturn, a deterioration in export levels is a nationwide problem. With the global economic malaise, the slowdown in emerging markets and the negative interest rates in several economies’ bond markets, investment is flowing to the U.S. and U.S. stocks, driving up demand for the U.S. dollar, inadvertently affecting our competitiveness abroad.”

During last week’s Farm Progress Show, Case IH and New Holland made a splash with the introduction of an autonomous tractor concept.

Case IH and CNH Industrial’s Innovation Group based the cabless autonomous concept on an existing Case IH Magnum tractor. The vehicle was built for a fully interactive interface to allow for remote monitoring of preprogrammed operations. The onboard system automatically accounts for implement widths and plots the most efficient paths depending on the terrain, obstructions and other machines in use in the same field. The remote operator can supervise and adjust pathways via a desktop computer or tablet interface.

While the concept tractor is cabless, Leo Bose, Case IH’s AFS marketing manager, says the tractor will have cab option, allowing farmers to make it as autonomous as they’d like.

The concept tractor New Holland introduced — the NH Drive — includes a cab identical to that of a standard T8 model, allowing it to still be used for operations where autonomy isn’t possible, such as high speed road transport or front loader work.

I caught up with Jim Walker, Case IH vice president of North America, during the show to find out when we might start to see autonomous tractors out in the field.

While momentum for unmanned aerial vehicle adoption in agriculture has somewhat slowed during the downturn in the market, there is still buzz and optimism surrounding the technology as a valuable tool.

Regulation of drone operation is continuing to take shape as well, with the most recent FAA rule taking effect on August 29.

Part 107 requires that operators who plan to fly small drones weighing less than 55 pounds for commercial purposes obtain a remote airman certificate and fly the aircraft no higher than 400 feet above the ground, no closer than 400 feet from a structure, within visual line-of-sight and only during daylight hours.

The new rule was a hot topic among the UAV companies exhibiting at this year’s Farm Progress Show, in Boone, Iowa. The show kicked-off the day after the new rule took effect and the consensus among companies we visited was that it will ease the requirements for dealers, farmers and other service providers to legally use collected information from drones to make actionable on-farm decisions.

But there are still challenges operators needs to consider when flying fields, according Phil Stiles, president and general counsel of SkyView HD, a drone service company based in Florida.

According to the FAA, 76 waivers to its new Part 107 regulation were granted on the first day the rule took effect, and there could be as many as 600,000 drones used commercially during the first year of the new regulation.

Now from the Implement & Tractor Archives...

Speaking of futuristic tractors, in 1969 Kubota completed the Talent 25 tractor, which was then shown at the 1970 World’s Fair in Osaka, Japan. The futuristic tractor featured closed-circuit TV cameras that enabled the driver to overcome blind spots. The Talent 25 had 3 cameras linked to a screen in the cab and the operator could select which camera he wanted to view. While this was futuristic at the time, the concept can be found in a number of production tractors and self-propelled machines, which use the cameras for safety reasons when going in reverse.