The Ag Economy Barometer drifted lower in January to a reading of 167, a decline of 7 points compared to December and equal to the index’s November reading. The Index of Current Conditions in January was essentially flat compared to a month earlier with a reading of 199 vs. 202 in December, whereas the Index of Future Expectations declined 10 points to a reading of 151. Since peaking in October, the Ag Economy Barometer has fallen 16 points or about 9%. The barometer’s decline over the last three months is all attributable to weaker expectations for the future as the Index of Future Expectations has fallen 35 points or about 19% since October. The decline in future expectations stands in contrast to the Index of Current Conditions which in January was 21 points, or about 12%, higher than in October. The ongoing strength in the Current Conditions Index appears to be driven by the ongoing rally in crop prices, while the deterioration in the Futures Expectations Index seems to be motivated by longer-run concerns about policies that could impact U.S. agriculture in the future. The Ag Economy Barometer is calculated each month from 400 U.S. agricultural producers’ responses to a telephone survey. This month’s survey was conducted from Jan. 18-22, 2021. 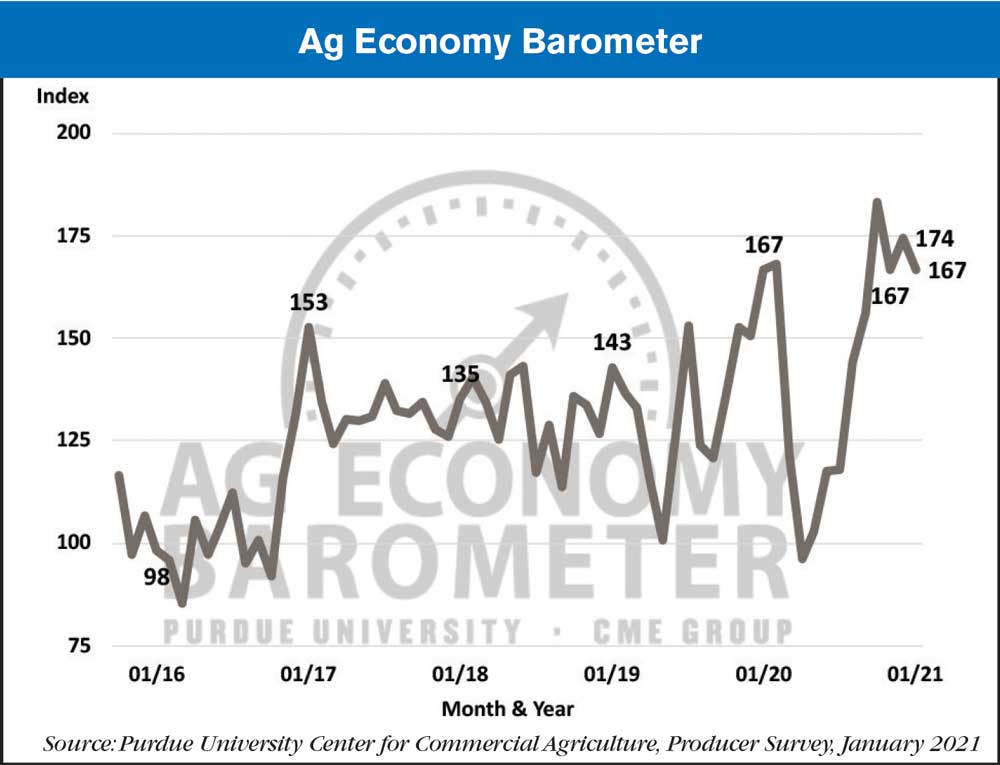 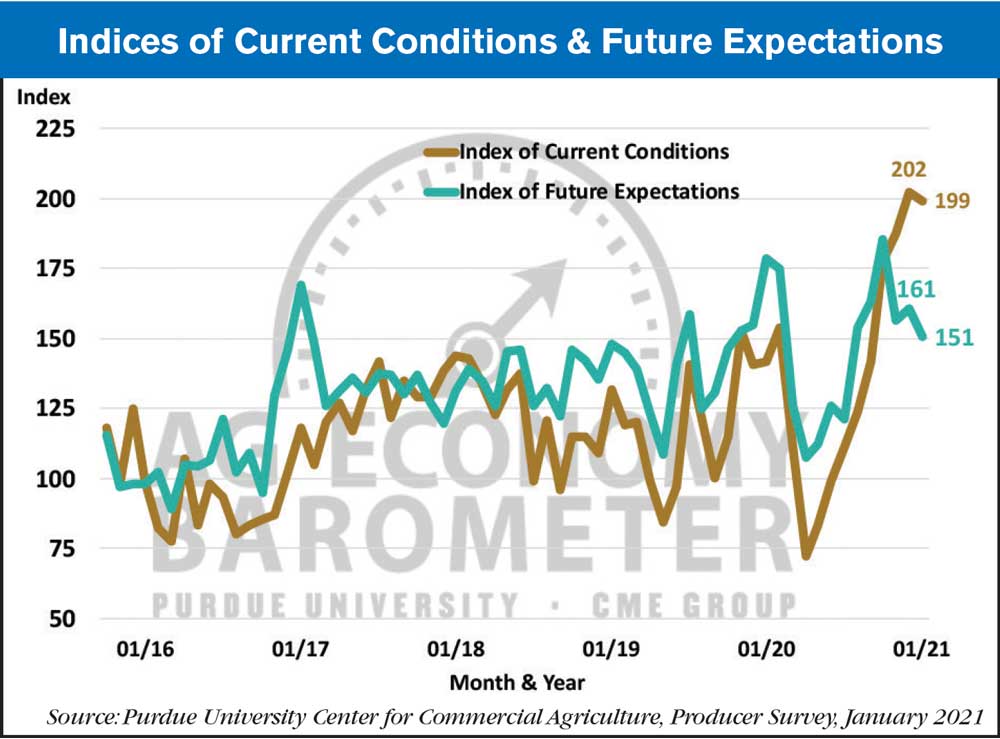 Farmers’ expectations for their farms’ financial performance improved markedly in recent months. Over the last three months, nearly one-third of producers said they expect their farms’ financial performance in the upcoming year to be better than last year. This stands in sharp contrast to late spring and summer when just 12% of respondents expected their farms’ financial performance to improve in the upcoming year. In two follow-up questions, 17% of farmers in January 2021 said the size of their operating loan is expected to increase this year. Among farmers who expect their operating loan to increase, 20% of them said it was because they were going to carry over unpaid operating debt into this year, implying that 3-4% of surveyed farmers are suffering financial stress. When the same questions regarding operating loans were posed a year ago, results indicated 5-6% of farms in our survey were suffering financial stress suggesting that financial stress has declined over the last year.

Consistent with their expectations for improved farm financial performance, farmers continue to be optimistic that now is a good time to make large investments in their farming operation. For the second month in a row, the Farm Capital Investment stood at a record high of 93 which is more than double its April 2020 reading of 38. January was also the second month in a row that 15% of respondents said they plan to increase their purchases of farm machinery in the upcoming year when compared to a year earlier. The machinery purchase question is a relatively recent addition to the monthly barometer survey, only dating back to March 2020. Still, the December and January responses to this question are by far the most positive responses received to this question to date, with nearly four times as many producers this winter indicating they plan to increase their farm machinery purchases than expected to do so last spring. 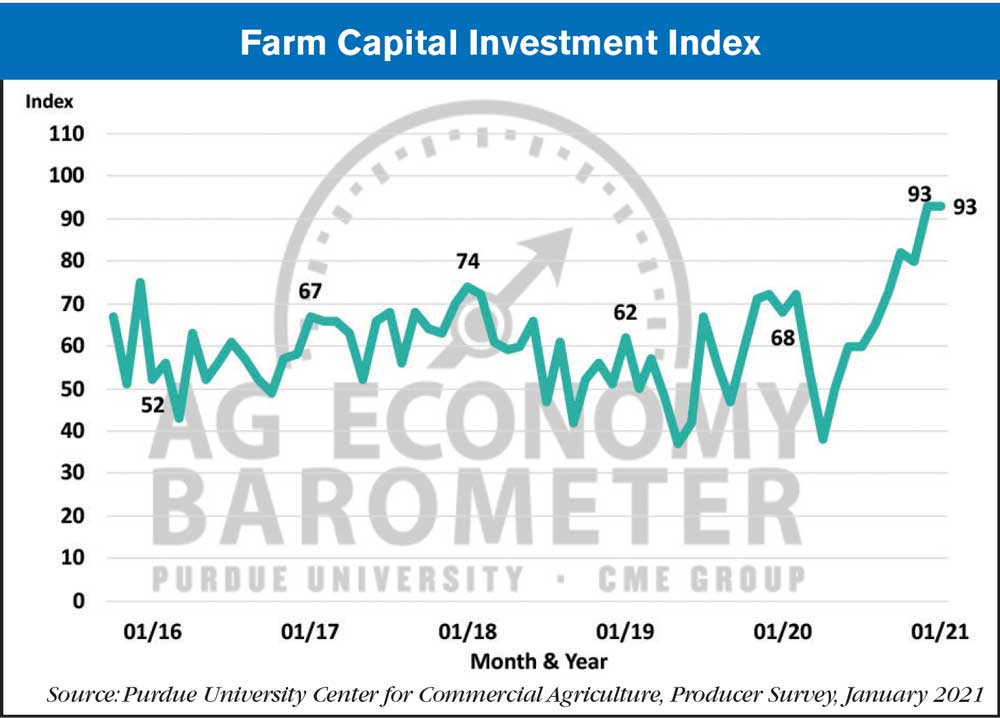 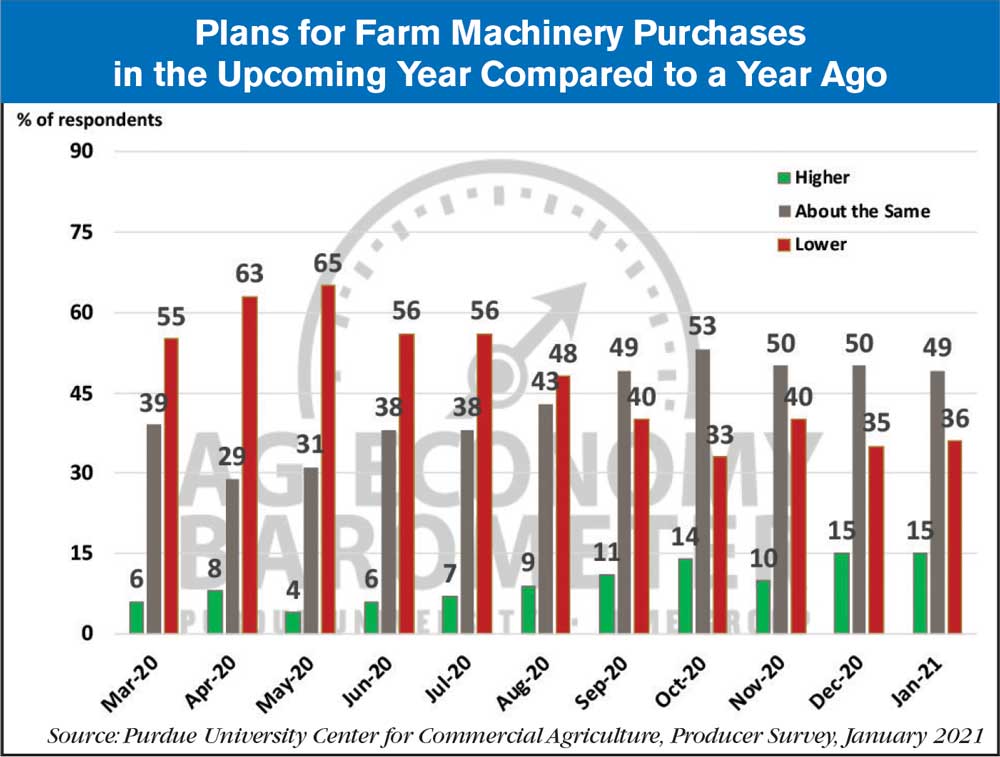 Optimism about farmland values, especially in the short run, continues to increase. When asked what they expect to happen in the upcoming 12 months, 43% of respondents, up from 35% in December, said they expect farmland values to rise. This is by far and away the most optimistic short-run perspective farmers have provided regarding farmland values during the life of the barometer survey. Farmers’ longer run (5-year) perspective on farmland values was virtually unchanged from December’s life of survey high with 64% of respondents expecting higher values five years from now. Compared to December, more farmers expect to see upward pressure on farmland cash rental rates in 2021 with 27% of respondents expecting higher rental rates this month, up from 18% who said they expected higher rates when surveyed back in December. 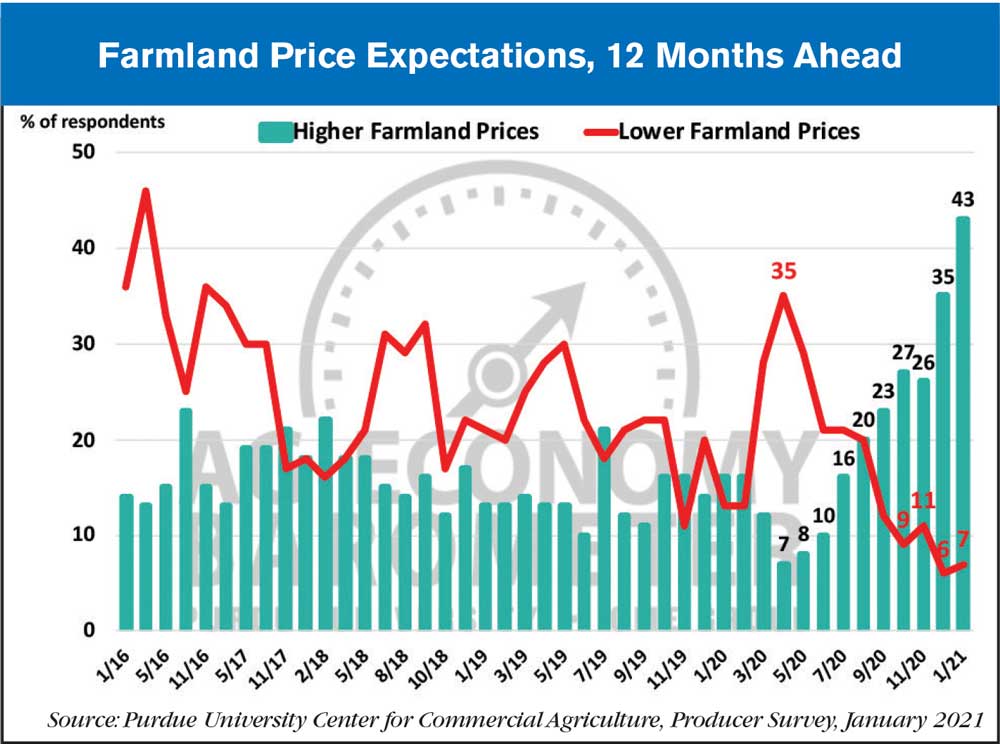 Farmers’ weakening expectations for the future appear to be motivated by concerns about several policy issues. Although crop price strength in recent months has been partly attributable to strong exports to China, farmers’ confidence that the trade dispute with China will be resolved in a way that is favorable to U.S. agriculture continues to wane. Back in June, 65% of respondents expected the trade dispute to be resolved in a way that’s favorable to U.S. agriculture. That declined to 50% in November and in January declined further to just 38% of respondents expecting a favorable outcome to the trade dispute. Second, following the November election farmers’ concerns about more restrictive environmental policies being applied to U.S. agriculture jumped sharply. In October, 41% of respondents said they expected more restrictive environmental policies in the next 5 years, whereas in both December and January 83% said they expected more restrictive policies. Farmers have also become more concerned that both estate and income taxes are likely to increase over the next five years. In October, 35-40% of farmers expected income and estate taxes to rise in the future. In January, these percentages rose to 73-75% expecting higher estate and income taxes, respectively. 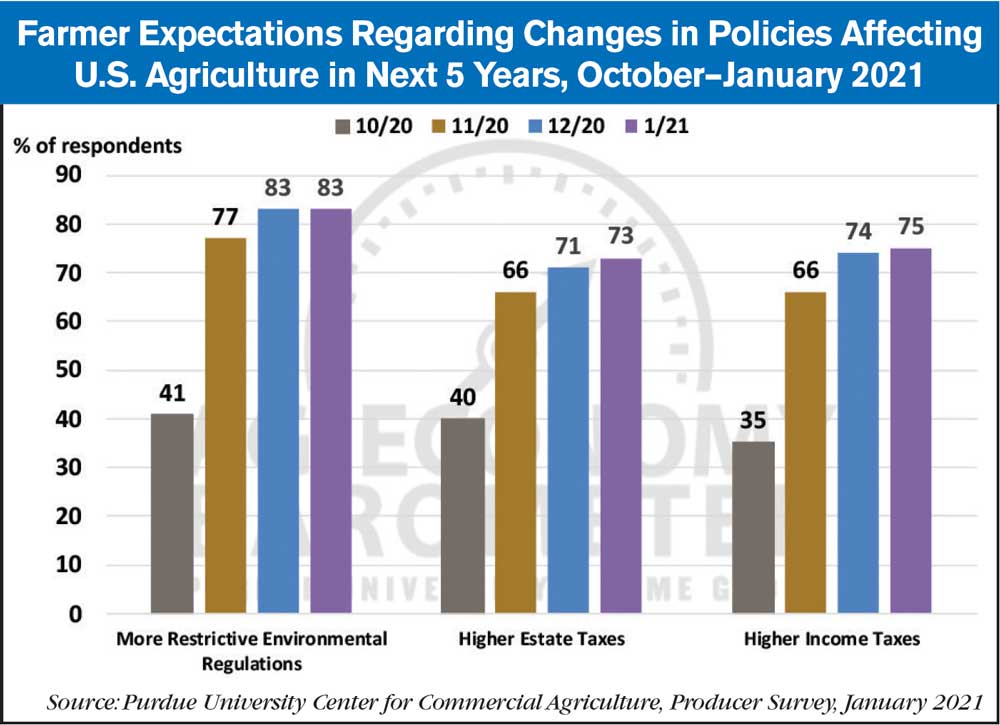