The Purdue University/CME Group Ag Economy Barometer, which is an index measuring the health of the U.S. ag economy, declined slightly in March, dropping to 133 compared to 136 in the previous month.

According to authors of the report, concerns regarding future economic conditions pushed the Index of Future Conditions down to 139 in March, a 6 point drop from readings in February. The authors also note that although there was a decline in March, the Future Expectations Index is still 15 points higher than it was this time last year. The Index of Current Conditions was virtually unchanged from February and is 14 points lower than it was in March 2018. 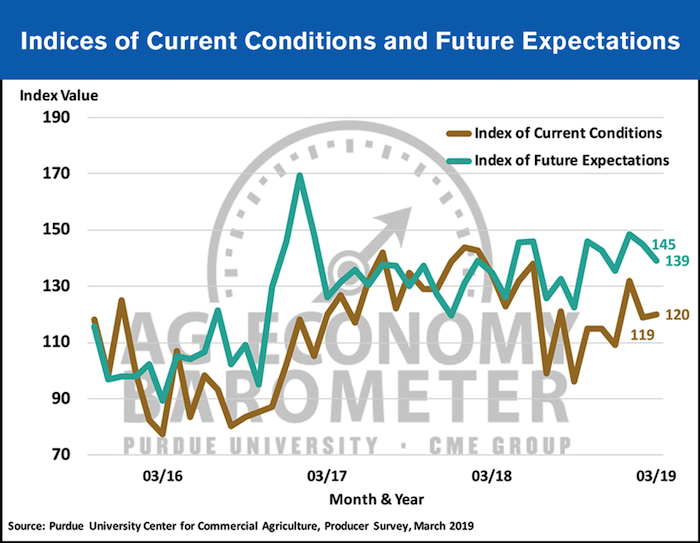 “The Large Farm Investment Index rebounded during March to a reading of 57 compared to a value of just 50 one month earlier,” say the Purdue researchers. “This month’s value was the second highest reading for the Investment Index since last summer when it was in the low 60s. Although the Investment Index improved, this more optimistic attitude did not carry over into producers’ perspective on farmland values. The percentage of producers expecting farmland values to decline over the next year increased from 20% in February to 25% in March. Similarly, the percentage of producers expecting lower farmland values 5 years into the future rose to 15% up from 11% one month earlier.” 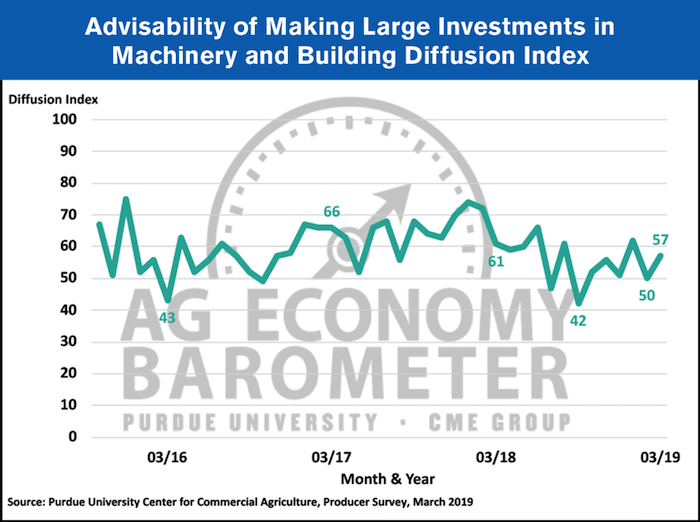 Financial stress in the production agriculture sector also continues to be a concern according to the authors. When asked about the financial expectations of their farms, 59% of respondents felt their performance would be the same in 2019 as it was in 2018 (21% expect it to be “better than” and 20% expect “worse than”). When asked about their level of optimism for their farms in the future financially, 52% indicated they were less optimistic about the future. 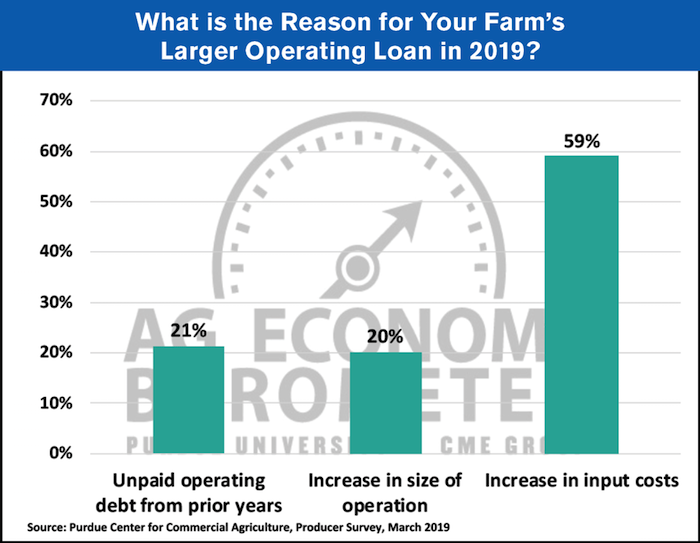 When this question was posed in January, the results were similar according to the authors. “In January, 25% of the farms in our sample indicated that they were going to have a larger operating loan in 2018 than in 2019 and when we follow up and asked why their operating loan would be larger, 27% responded that it was because they had to carryover unpaid operating debt from prior years. Combined, these survey results suggest that 5-7% of U.S. farms are under some degree of financial stress.”

The future of agricultural exports was at its highest level of optimism since May 2017 with 68% of respondents indicating that they expect ag exports to increase. Producers were then asked if they felt the resolution to the dispute with China would be resolved in a way that benefits the U.S. and if they believed that resolution would be settled by July 1. While 77% of producers felt that the dispute would be settled in a way beneficial to the U.S., 55% indicated that they do not feel this will occur before July 1.