Fewer new loans to farmers continued to drive a pullback in agricultural lending activity. A historically low number of new loans contributed to an increase in average loan size and drove a slight decrease in the overall volume of non-real estate loans at commercial banks in the fourth quarter. Stronger prices for agricultural commodities, alongside continued support from government payments, may have reduced financing needs for some farmers and contributed to the slower pace of lending.

Lending activity at commercial banks continued to slow in the fourth quarter, according to the National Survey of Terms of Lending to Farmers. The volume of total non-real estate farm loans declined by about 1% from a year ago, but remained slightly above the 10-year average in the fourth quarter (Chart 1). Farm lending declined at an average pace of 2% throughout 2020, following an average decline of nearly 5% in 2019 and an average increase of more than 12% in 2018. 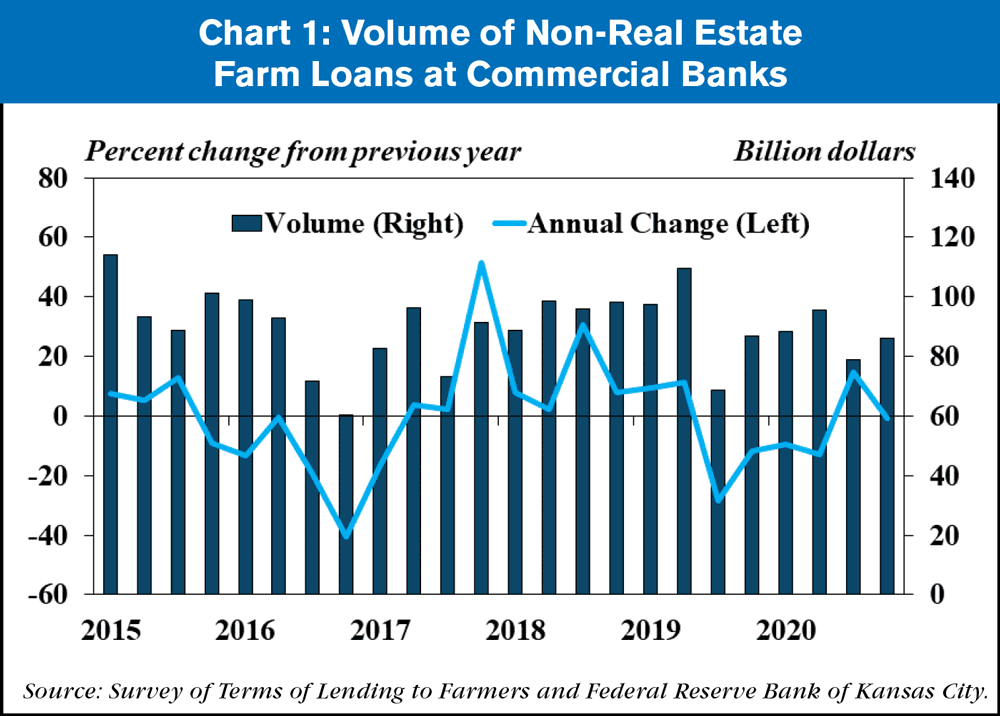 Smaller loan volumes were driven by a lower number of new loans to farmers. While the number of loans continued to trend downward, the average size of farm loans grew for the second consecutive quarter (Chart 2). The number of new bookings with balances of less than $100,000 decreased by about 30% from a year ago and accounted for nearly 90% of the overall decline. The number of notes greater than $100,000 also dropped by about 18% and together with a record low number of loans overall, the average size of all new non-real estate loans reached a historic high. 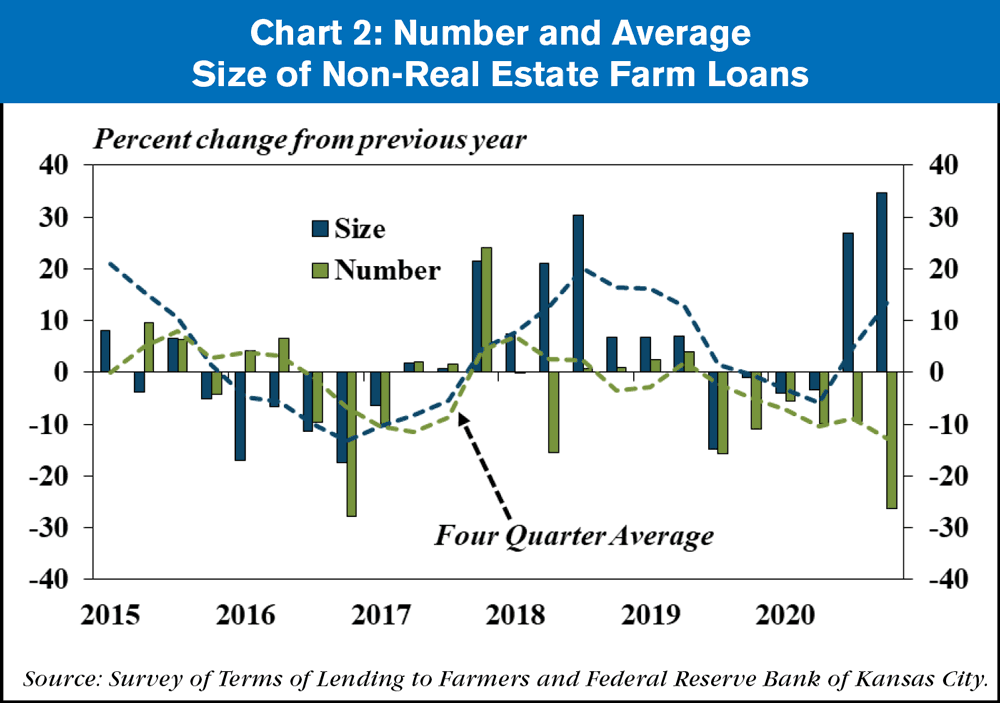 Changes in the average size and number of loans were generally consistent across all types of loans. For all lending purposes, the number of loans decreased and the average loan size increased (Chart 3). While there were fewer loans for all purposes, operating loans continued to comprise the majority of non-real estate lending and accounted for over half of the overall decline. 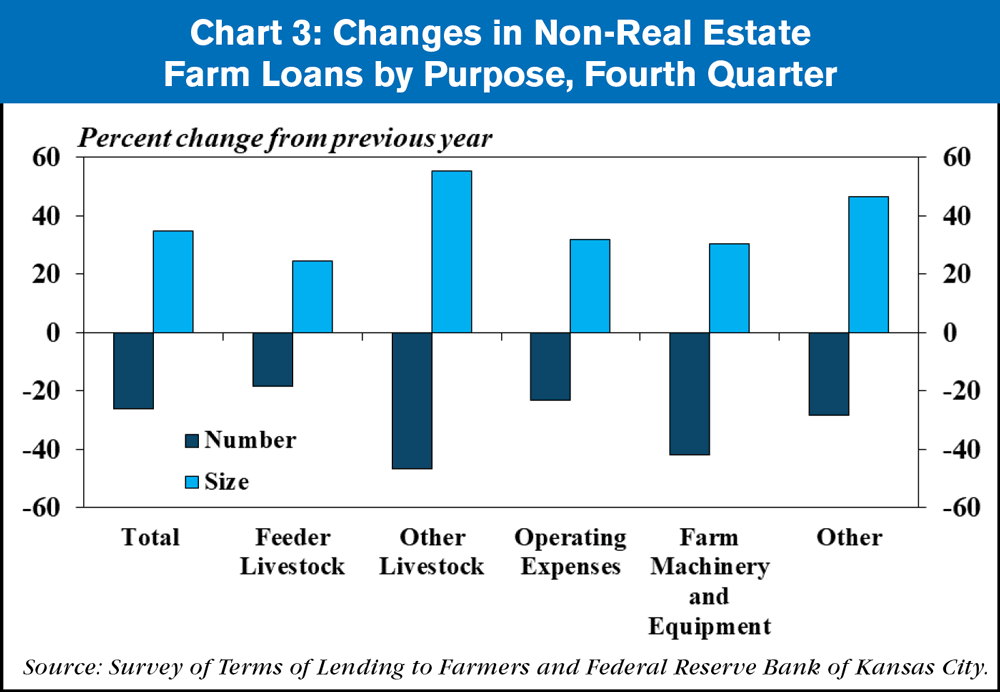 Interest rates on agricultural loans remained at historically low levels in the fourth quarter. After increasing to a 10-year high in 2018 and 2019, rates on farm loans began to decline in the second quarter of 2020 alongside a decrease in benchmark rates (Chart 4). Compared to the same time a year ago, interest rates charged on non-real estate farm loans declined by at least 110 basis points for all purposes. 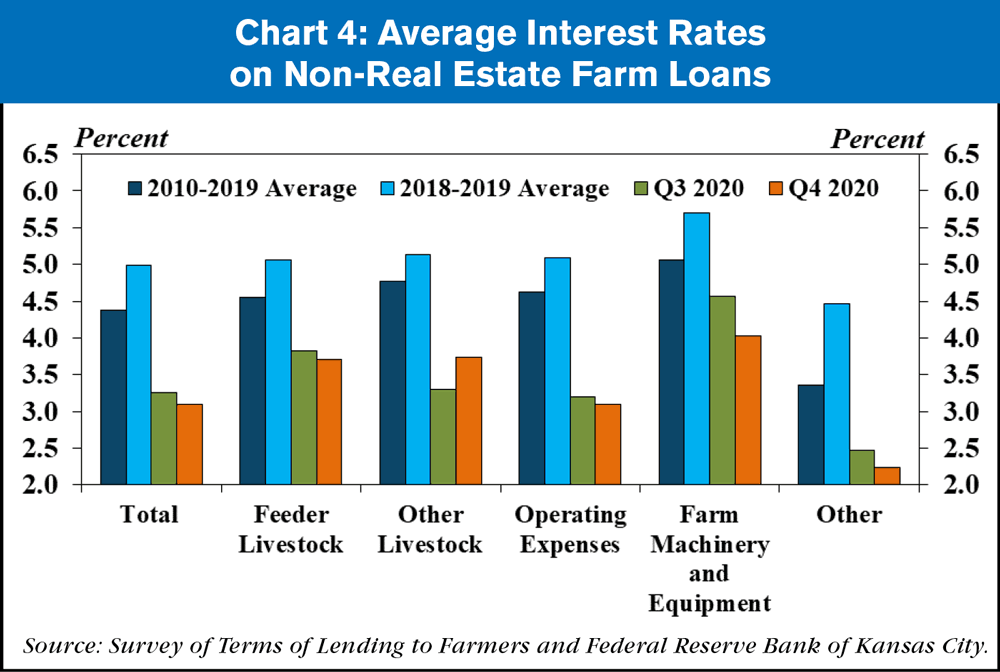 Alongside record low interest rates on farm loans, interest expenses for producers declined notably. Compared to the beginning of the year, annual interest expense for a hypothetical midwestern grain farmer financing half of all production costs was nearly 40% lower (Chart 5). Assuming an average yield of 175 bushels per acre, that reduction in interest expense would be equivalent to a roughly 3 cent increase in corn prices. 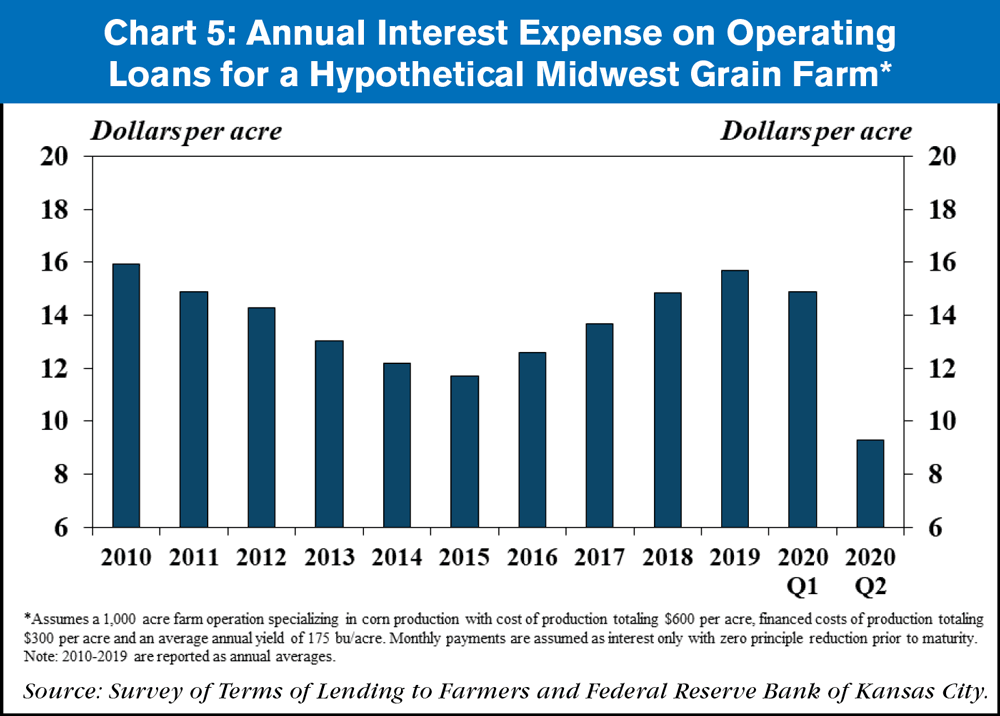 Agricultural lenders continued to report a slower pace of lending alongside improved financial conditions for farmers in the fourth quarter. Higher crop prices and continued support from government payments likely reduced the need for smaller loans, which drove the overall decline in lending activity. Moving forward, loan volumes may soften further if sharp increases in prices for key agricultural commodities, such as corn, soybeans, and wheat, continue to ease financing needs for farm borrowers. 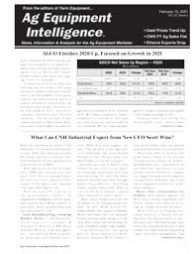 What Can CNH Industrial Expect from New CEO Scott Wine? 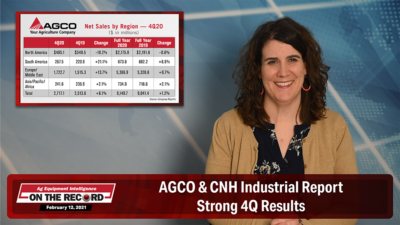 In this week's program we discuss AGCO and CNH Industrials 4Q and full year 2020 earnings, with both reporting revenues up during the quarter. In the Technology Corner, Jack Zemlicka talks about Tim Norris' new consulting business focused on precision ag companies with 5-10 employees. Also in the episode, we look at the latest numbers for UK tractor market share and Art's Way's 2020 earnings.
View More