A slower pace of farm financing activity continued in the third quarter. Amid ongoing weakness in the agricultural economy surrounding developments related to the COVID-19 pandemic, the total volume of non-real estate farm loans remained subdued. Loans for operating expenses increased from last year but were less than the last 3 years, and the number of new loans originated to farmers declined for nearly all loan types. Similar to the previous quarter, government payments and lending programs may have offset both declines in farm revenues and financing needs of some farm borrowers in the third quarter.

Third Quarter National Survey of Terms of Lending to Farmers 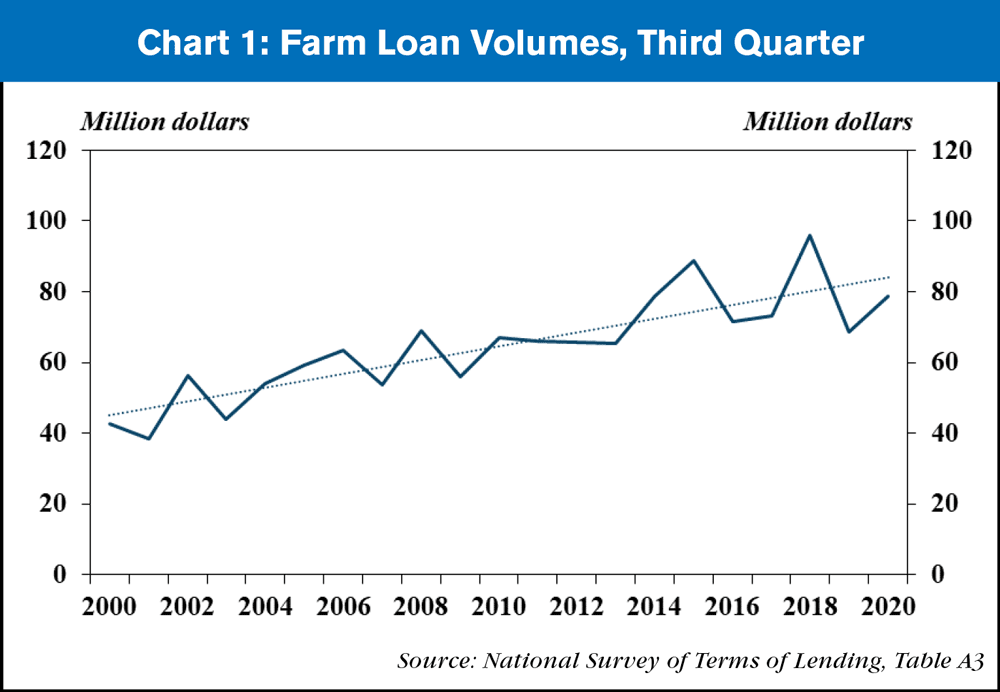 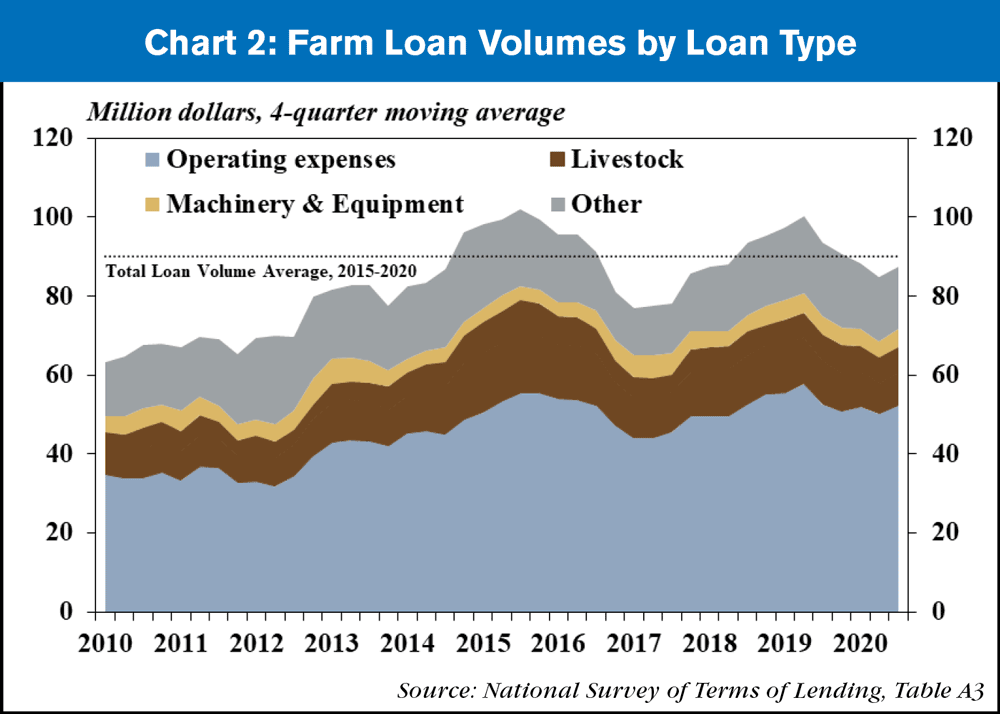 Subdued volumes of operating loans contributed to the slowdown in lending. Loans for operating expenses increased from a year ago but remained less than 2017 and 2018 (Chart 3). Loans to finance feeder livestock and farm machinery followed a similar trend, while the volume of loans for other livestock remained steady. All other loans declined for the second straight year, further weighing on overall loan volumes. 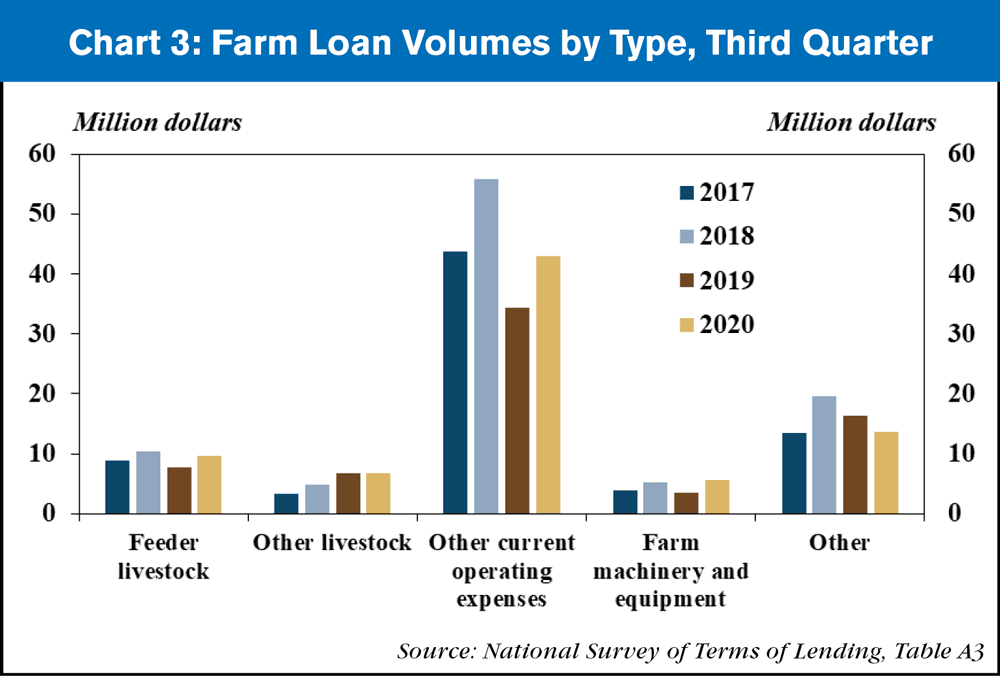 Despite notable increases in the average size of all loan categories, a smaller number of loans seemed to restrain lending volumes. The average size of loans for operating expenses and farm machinery increased from last year and were similar to 2018 (Chart 4). Livestock loans were larger, on average, for the second straight year, including a 40% increase in the size of loans for other livestock, which typically include breeding stock. However, larger loan sizes seemed to be offset by smaller loan numbers. The total quantity of loans issued to farmers decreased, driven by a 12% decline in the number of operating loans. 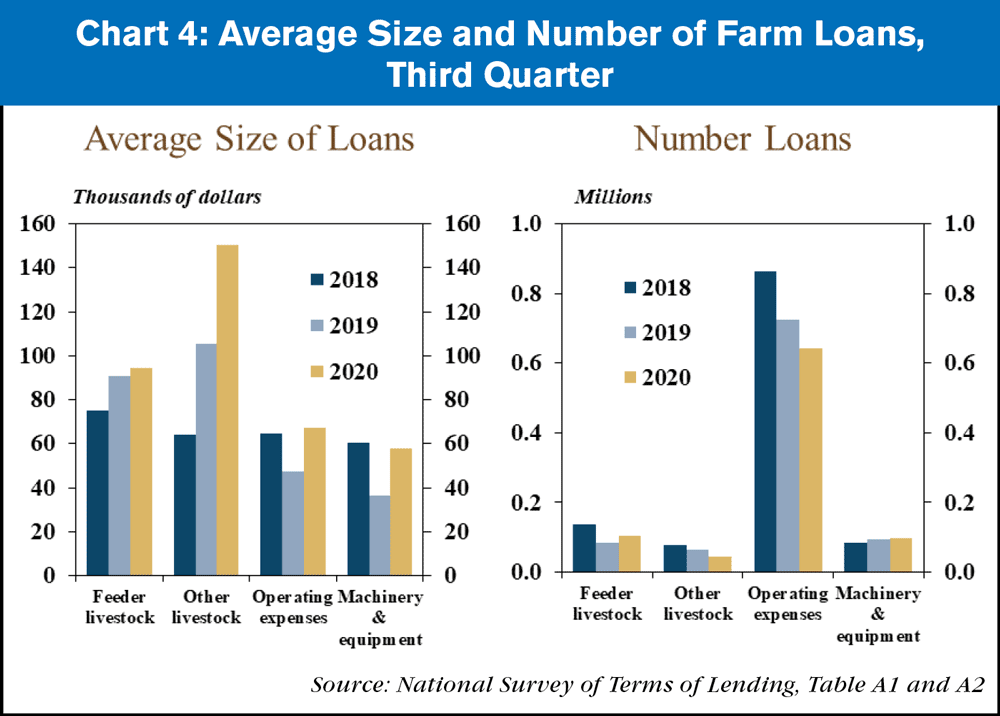 Slower lending activity at banks with large farm lending portfolios weighed on total loan volumes, but large portfolios continued to account for a majority of loans made to farmers. At the turn of the century, banks with small loan portfolios ($25 million or less in farm loans) comprised more than half of all lending to farmers (Chart 5). However, as loan sizes and volumes have increased over time, so has the share of lending activity at banks that lend more to farmers. In the third quarter, banks with large farm lending footprints accounted for more than 70% of all farm lending. Although loan volumes at the largest banks have trended upward over the past two decades, the pace of growth among those institutions has fallen below trend for the past 4 quarters, which could be the result of greater risks in the outlook for farm finances or greater support for farm borrowers from government payments and programs. 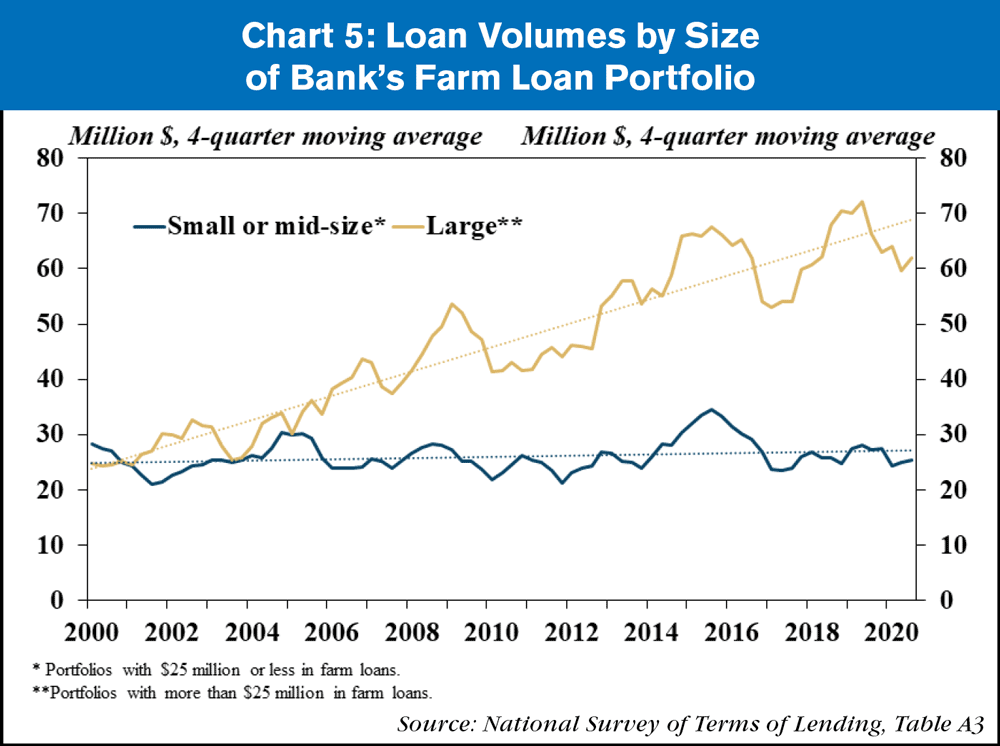 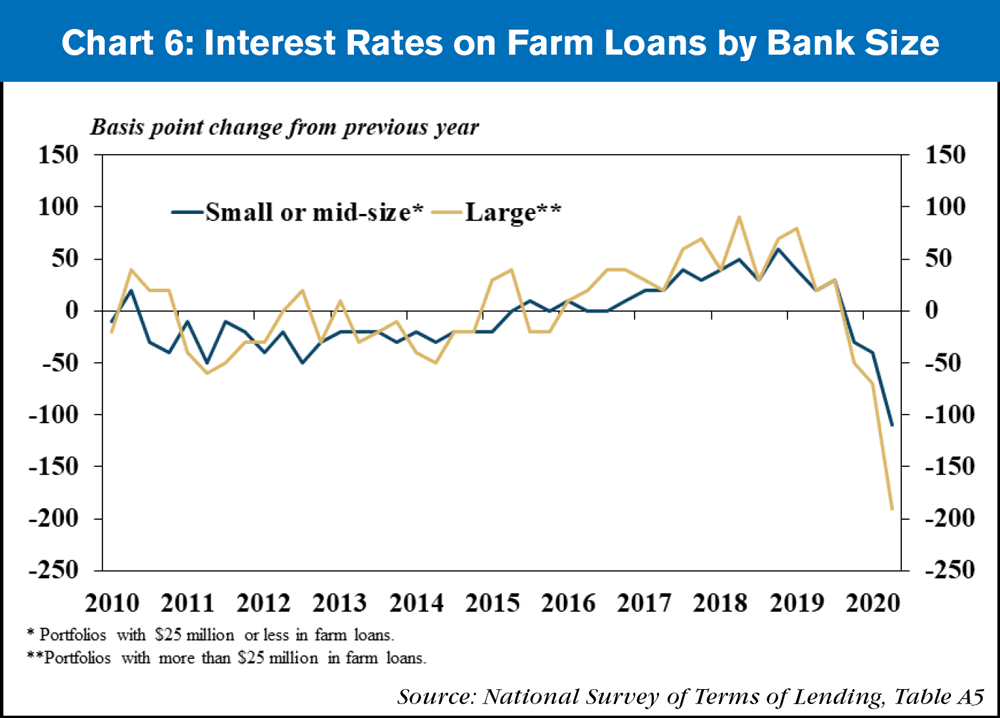 Despite increasing somewhat from last year, originations of new farm loans at commercial banks remained subdued in the third quarter. Prices for most agricultural commodities remained low leading into the third quarter, contributing to a weak economic environment and weighing on lending conditions in the agricultural sector. Although government payments and programs have improved the outlook for farm finances, they also may have reduced the need for financing for some farm borrowers. Moving forward, market conditions for some agricultural commodities could improve by year-end due to lower expectations for crop inventories and an uptick in prices in October. However, the outlook for agricultural finance, like the general economy, is highly uncertain amid the ongoing pandemic.