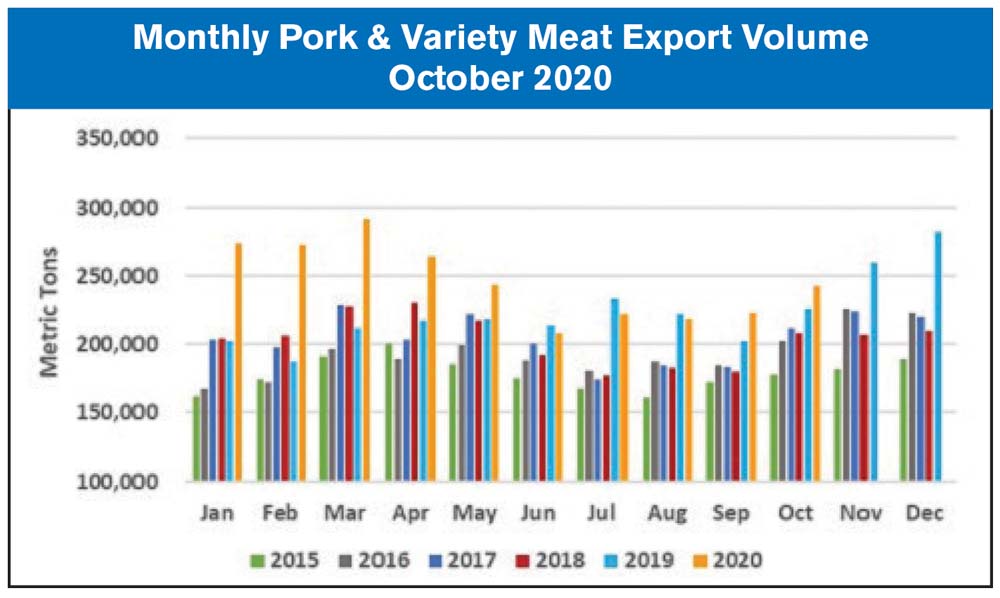 While China/Hong Kong remains this year’s leading destination for U.S. pork exports, October data showed rising momentum in several key markets. Exports to Japan were the largest since April at 34,854 mt (up 18% from a year ago), valued at $146.9 million (up 20%). These results pushed January-October exports to Japan 4% above last year’s pace in volume (318,962 mt) and 6% higher in value ($1.34 billion). U.S. pork continues to increase its share of Japan’s ground seasoned pork imports, which is now 72% compared to 57% last year. Value of these imports reached $275 million through October, up 51% year-over-year, reflecting tariff reductions in the U.S.-Japan Trade Agreement and strong consumer demand for sausages and other processed pork products.

Pork exports to China/Hong Kong remained well above year-ago levels in October but made up a significantly smaller share of total U.S. shipments when compared to totals posted earlier this year. October exports were 70,865 mt, up 16% from a year ago, valued at $157.5 million (up 11%). Through October, exports to China/Hong Kong were 86% above last year’s pace in volume (871,612 mt) and 104% higher in value at just under $2 billion.

October beef exports to China climbed to a record 6,831 mt valued at $48.1 million, easily exceeding previous record levels reached in recent months. Through October, exports to China were up 219% in volume (24,709 mt) and 187% in value ($177.7 million) from a year ago, but have been especially strong since China’s foodservice sector rebounded from COVID-19 related restrictions imposed earlier in the year. In Hong Kong, where the foodservice recovery has seen more interruptions, January-October exports were down 5% from a year ago in volume (67,882 mt) and 9% lower in value ($541.4 million).

Beef exports to leading market Japan achieved solid growth in October, topping last year by 10% in volume (23,353 mt) and 8% in value ($146.8 million). Through October, exports to Japan trailed last year’s pace by 2% in both volume (257,083 mt) and value ($1.61 billion). Japan has increased imports of U.S. short plate, largely for use in gyudon beef bowl restaurants which have performed relatively well due to their quick-serve and takeaway nature. But this growth has been partially offset by smaller volumes of chuck and loin cuts that are more reliant on full service, sit-down dining. U.S. market share for Japan’s total beef imports was 43.7% through October, up from 40.5% last year, as Australia’s share declined from 45.5% to 41.2%.