U.S. beef exports remained very strong in September while pork exports continued to be impacted by retaliatory duties in China and Mexico, according to data released by USDA and compiled by the U.S. Meat Export Federation (USMEF). Beef exports cooled from the record results posted in August but were still significantly higher year-over-year. Pork muscle cut exports improved over last September’s volume, but were offset by sharply lower shipments of pork variety meat. 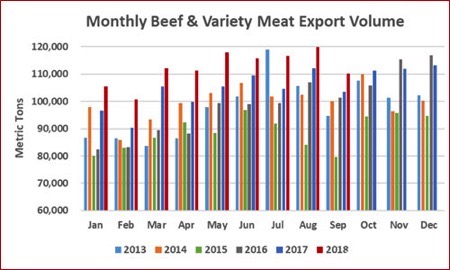 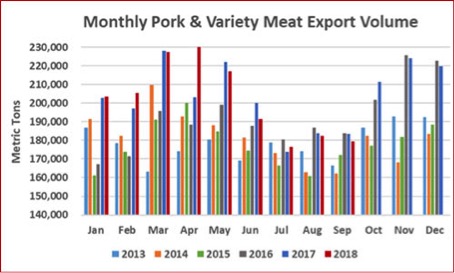 September exports accounted for 24.8% of total pork production, up from 23.6% a year ago. For muscle cuts only, the percentage exported was 21.8% — up two full percentage points from last September. For January through September, pork exports accounted for 26.1% of total production, down from 26.5% last year, but the percentage of muscle cuts exported increased from 22.1 to 22.7%. Export value per head slaughtered was down 1% from a year ago in September ($48.72) and for January through September ($52.46).

"With a full quarter still to be reported, beef export value records are already being surpassed in some markets and global value is on track for $8 billion by year’s end," said USMEF President and CEO Dan Halstrom. "Pork exports have also held up relatively well, but unfortunately the obstacles U.S. pork faces in China and Mexico are putting a lot of pressure on export value."