The latest episode of On the Record is now available! We’re excited to be back in the office for this week’s episode, which includes coverage of Titan Machinery’s strong first quarter performance, as well as the latest earnings reports from Deere & Co., AGCO and CNH Industrial. In the Technology Corner, Jack Zemlicka shares some of the results of the 7th Annual Strip-Till Operational Benchmark Study. Also in this episode, Deere earns the Dealer’s Choice Award in the Equipment Dealers Assn.’s Dealer-Manufacturer Relations survey, and dealer sentiment remains down in both North America and Europe.

Titan Machinery, Case IH’s largest dealership group in the U.S., reported big gains in its first quarter of fiscal year 2021 on May 28. For the quarter ended April 30, 2020, Titan reported revenues of $310 million compared to $278.3 million for the same quarter last year.

Titan Machinery’s chairman and CEO David Meyer noted that this was slightly offset by underperformance in the construction and international results, which were impacted more by the coronavirus pandemic.

All of the major farm equipment makers have posted their most recent quarterly results in recent weeks. Overall, the reports show ag machinery sales remain challenging,  but considering the ongoing trade tensions coupled with the COVID-19 pandemic, they were what many in the industry expected. 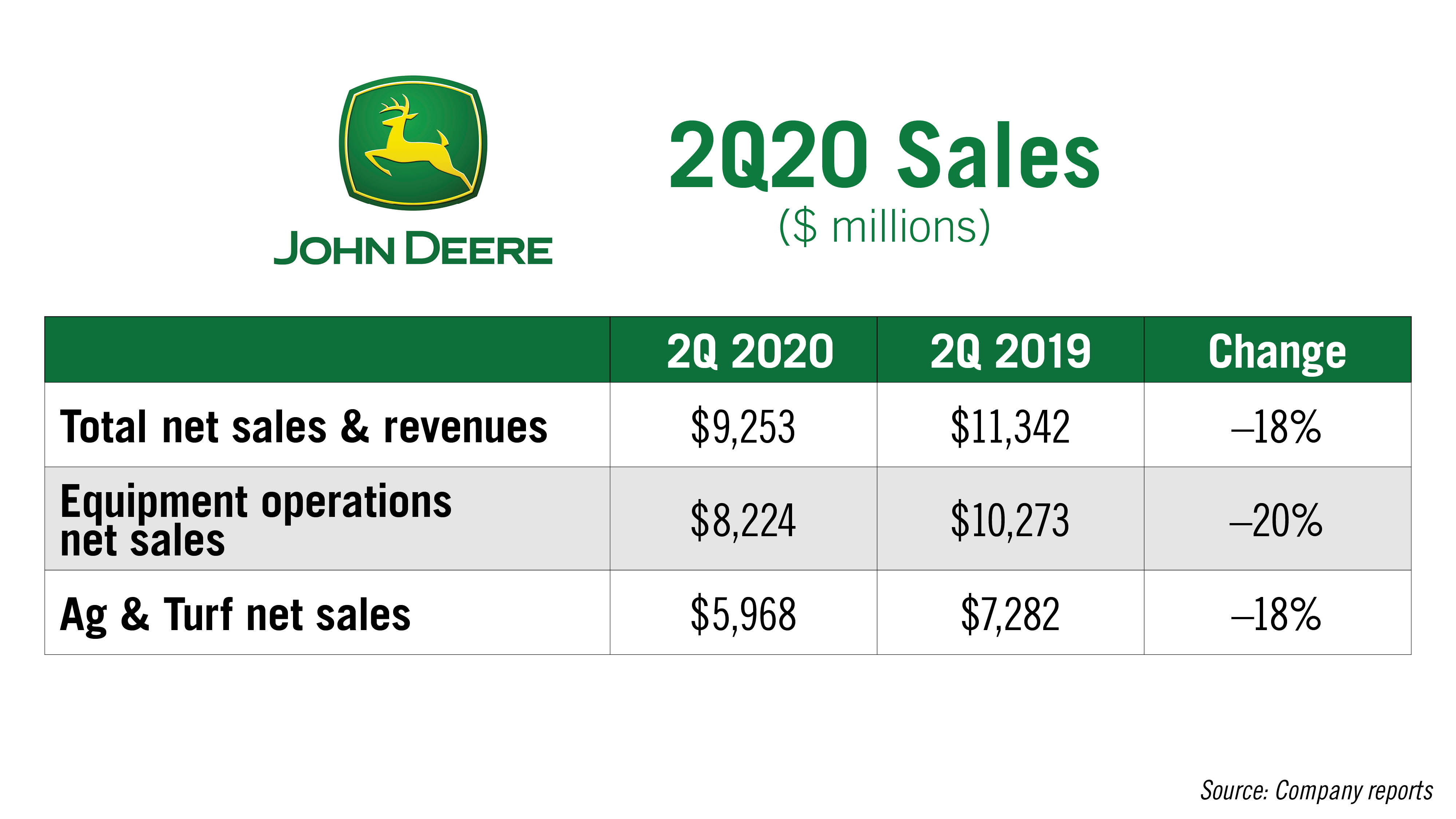 On May 22, Deere & Co. reported the results for its second quarter of fiscal year 2020, ended May 3. Overall, net sales and revenues were $9.3 billion for the period, a year-over-year decline of 18%.

Net sales for its equipment operations were reported to be $8.2 billion, a drop off of 20%. Farm machinery sales were nearly $6 billion vs. $7.3 billion in the second quarter of fiscal year 2019.

Deere expects its worldwide Ag & Turf sales for the full fiscal year to decline 10-15%. For the U.S. and Canada, the company is forecasting sales to fall about 10% for the year. 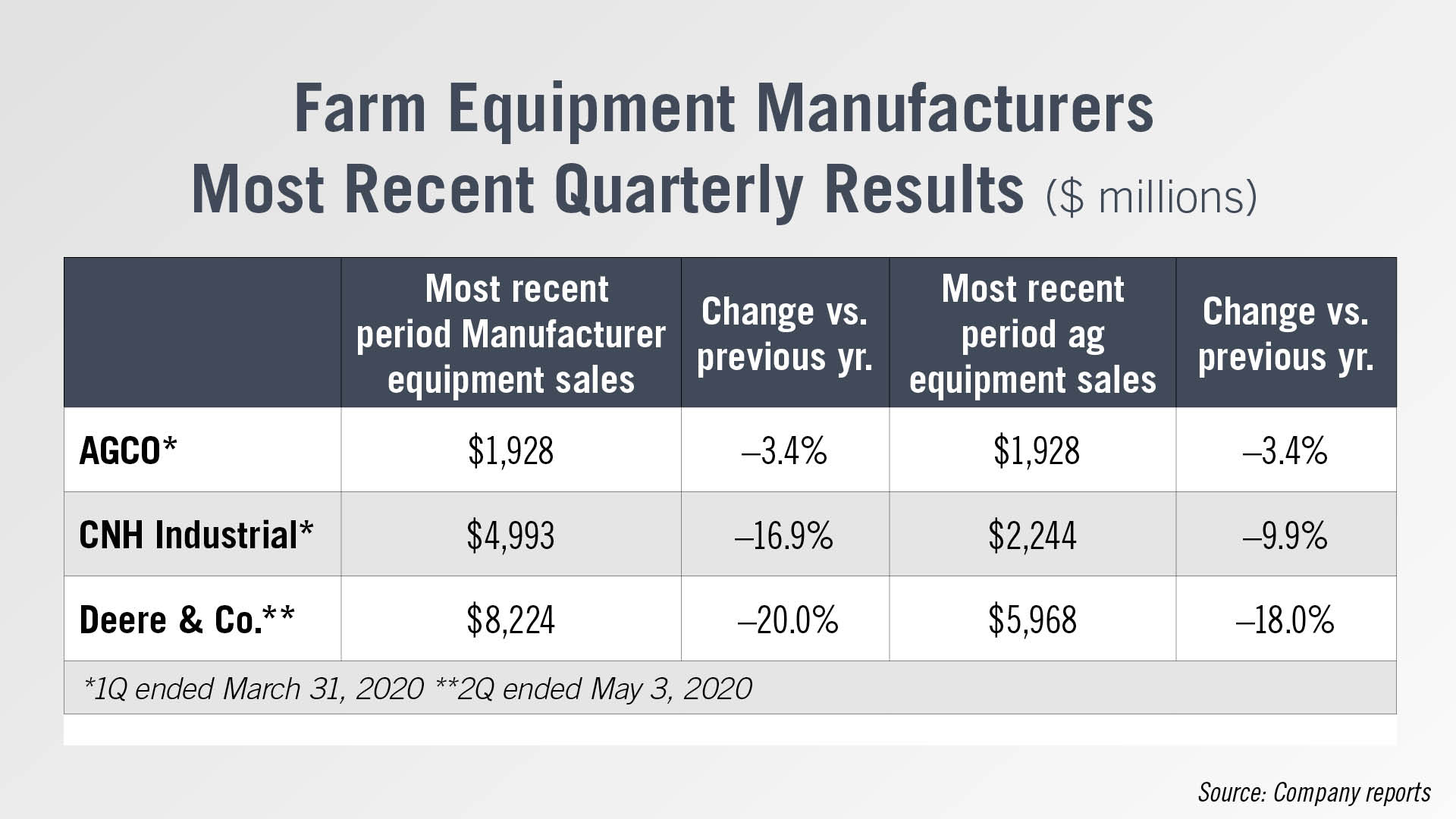 Comparatively, AGCO showed the strongest results with ag equipment revenues falling only 3.4% for the period. The more positive news for the world’s third largest farm equipment manufacturer was that its sales in North American increased by nearly 12% in the second quarter.

While CNH Industrial reported its second quarter worldwide sales of farm machinery fell by nearly 10% , its ag sales in North America were down by only about 3%.

RTK Use Dips Slightly Among Strip-Tillers

Strip-till farmers have typically been among the most progressive adopters of precision technology, embracing tools including variable-rate seeding, implement guidance and unmanned aerial vehicles.

But RTK-level correction is often referred to as the most essential technology in a successful strip-till system, given the importance of accurately planting into a narrow strip of soil.

Results of the 7th Annual Strip-Till Operational Benchmark Study, which analyzed the 2019 cropping season of more than 200 strip-tillers from 35 states, revealed that use of RTK among strip-tillers topped 75%.

While still representing three-quarters of respondents, the percentage dipped below 80% for the first time in 5 years, with about 16% of strip-tillers saying they relied on either GLONASS or WAAS for GPS and about 8% noting they didn’t use any level of correction for strip-till.

So which is the most popular brand of GPS system among strip-tillers? For the sixth year in a row, John Deere topped the list by more than a 2 to 1 margin over the next most popular system. Some 44% of strip-tillers utilized Deere guidance, in 2019, up about 4 points over the prior year.

Trimble was the second most used system, by 21% of strip-tillers, followed by Ag Leader at 17% and then Case IH at about 12%. 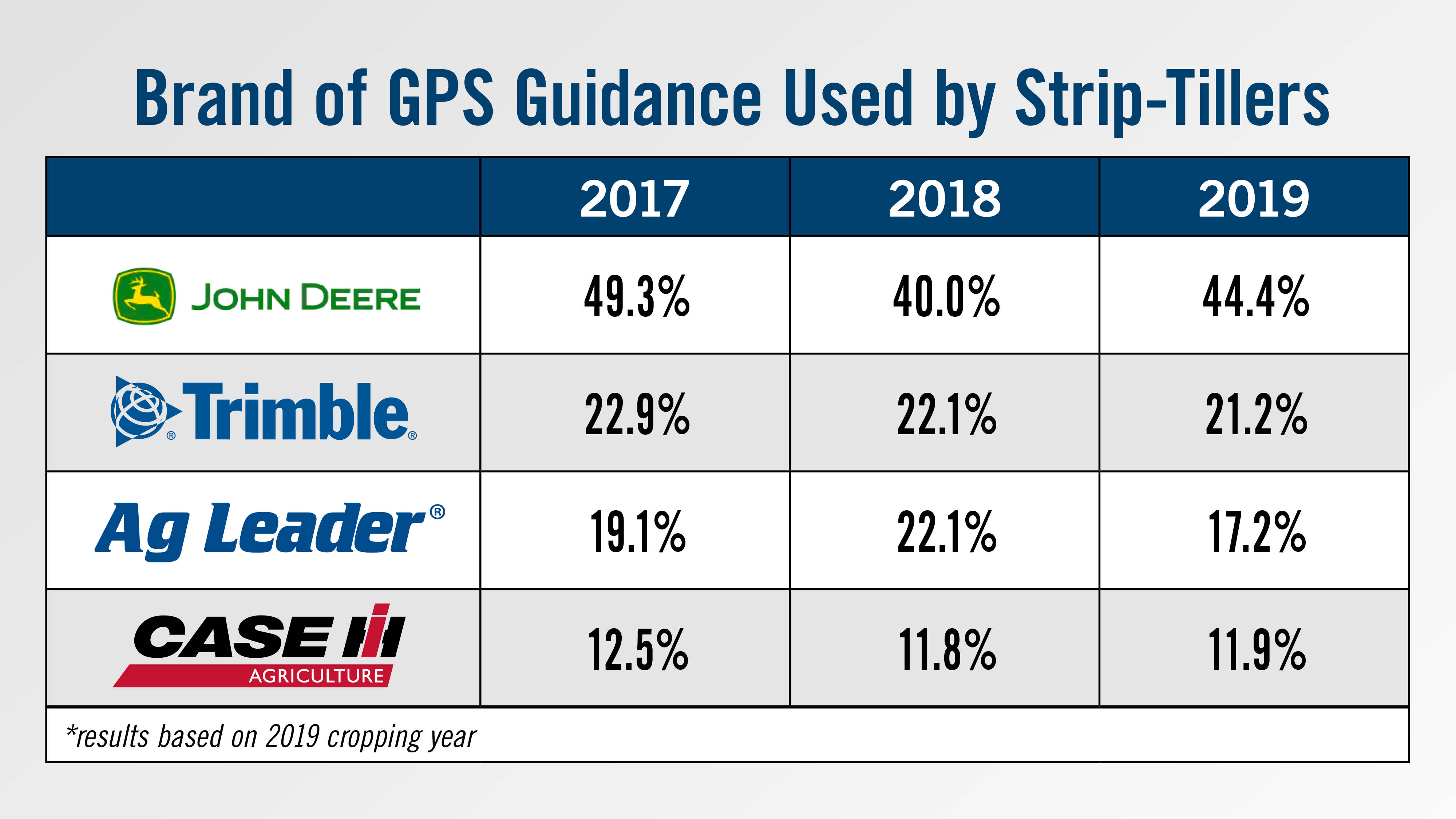 Looking at what new technologies strip-tillers had added or plan to add in 2020, more than half of respondents cited variable-rate seeding and variable-rate fertilizer application systems as planned purchases this year.

Another 37% have added or plan to add implement guidance in 2020 and more than 28% plan to purchase ag data management service or support.

For the full-line category, John Deere was once again on top earning the Dealer’s Choice Award, after 2 years of coming in behind Claas, who was added to the full-line category in 2018. Claas received a Gold Level Award this year. Deere’s score for overall satisfaction was a 5.58 on a scale of 1-7, with 7 being extremely satisfied. Claas’ overall satisfaction score was 5.4, followed by AGCO at 5.38.

Deere’s highest ranking came in Parts Quality, with a score of 6.13. It’s lowest ranking  — a 4.85 — was manufacturer’s response to dealer needs or concerns.

Extended coverage of the shortline manufacturers will be included in the July/August issue of Farm Equipment.

While dealers in both North America and Europe reported their sentiment has improved in the most recent surveys done by CEMA in Europe as well as Ag Equipment Intelligence’s Dealer Sentiments report, both groups remain negative about the business climate. 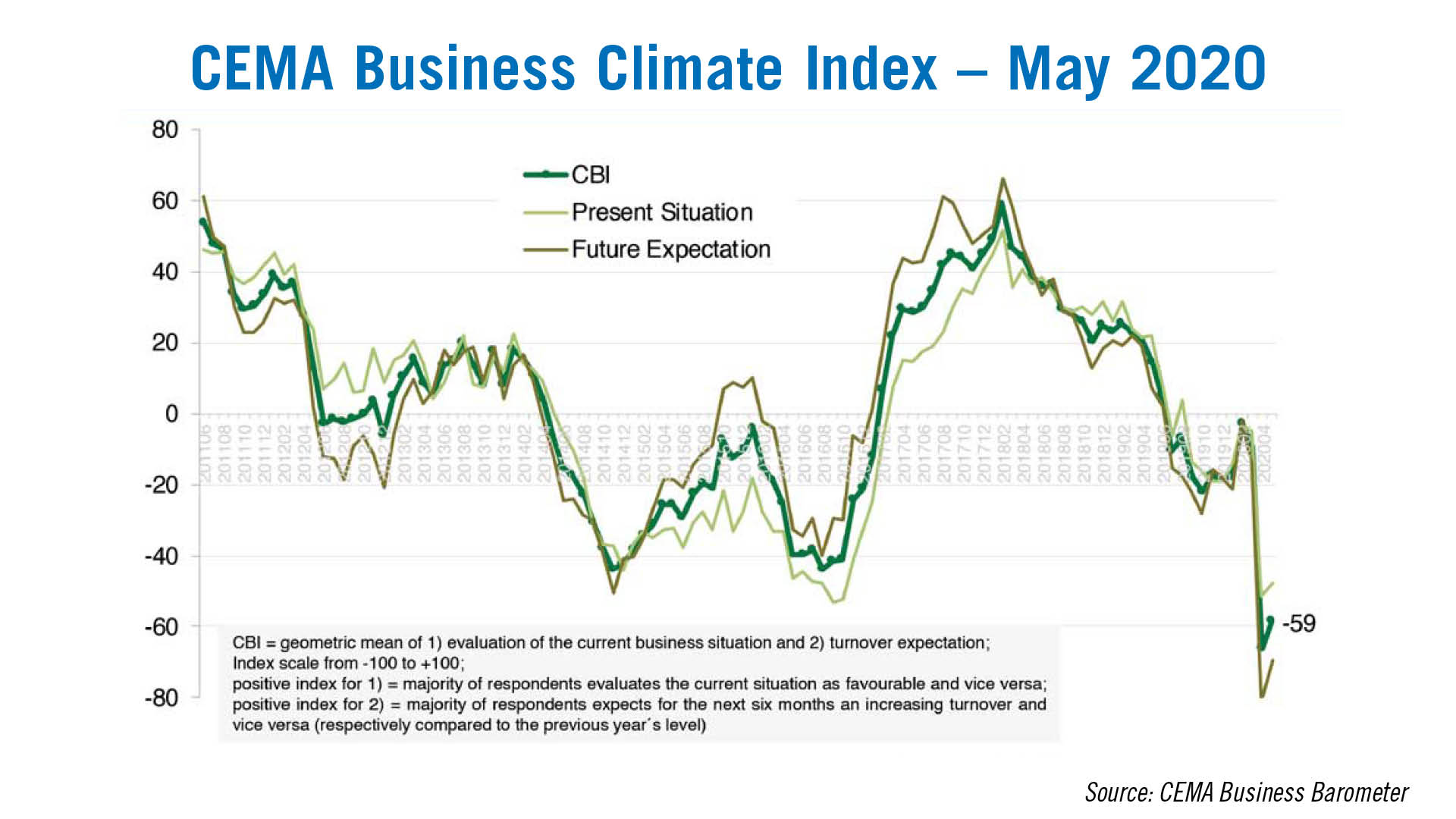 The European Agricultural Machinery Industry Assn.’s May 2020 Business Climate Index was –59 on a scale of –100 to +100. The association notes this was the sharpest and deepest drop off since the financial crisis of 2008-09.

Similarly, Ag Equipment Intelligence’s latest Dealer Optimism Index was –40%, which was an improvement from –66% in March. One dealer in the Northeast said customers who traditionally spend money have put purchases on hold indefinitely. He adds that future outlooks are not positive. 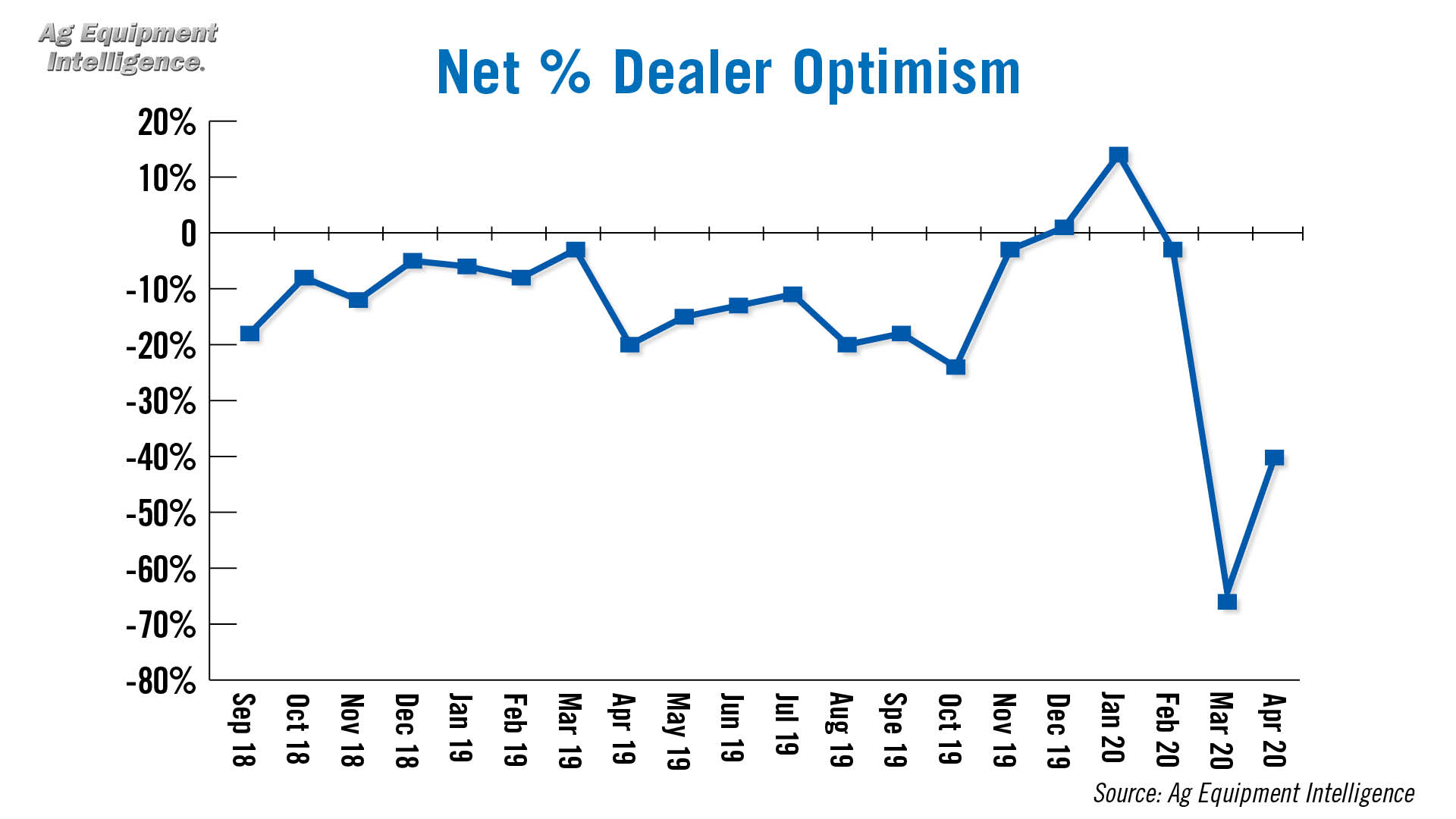 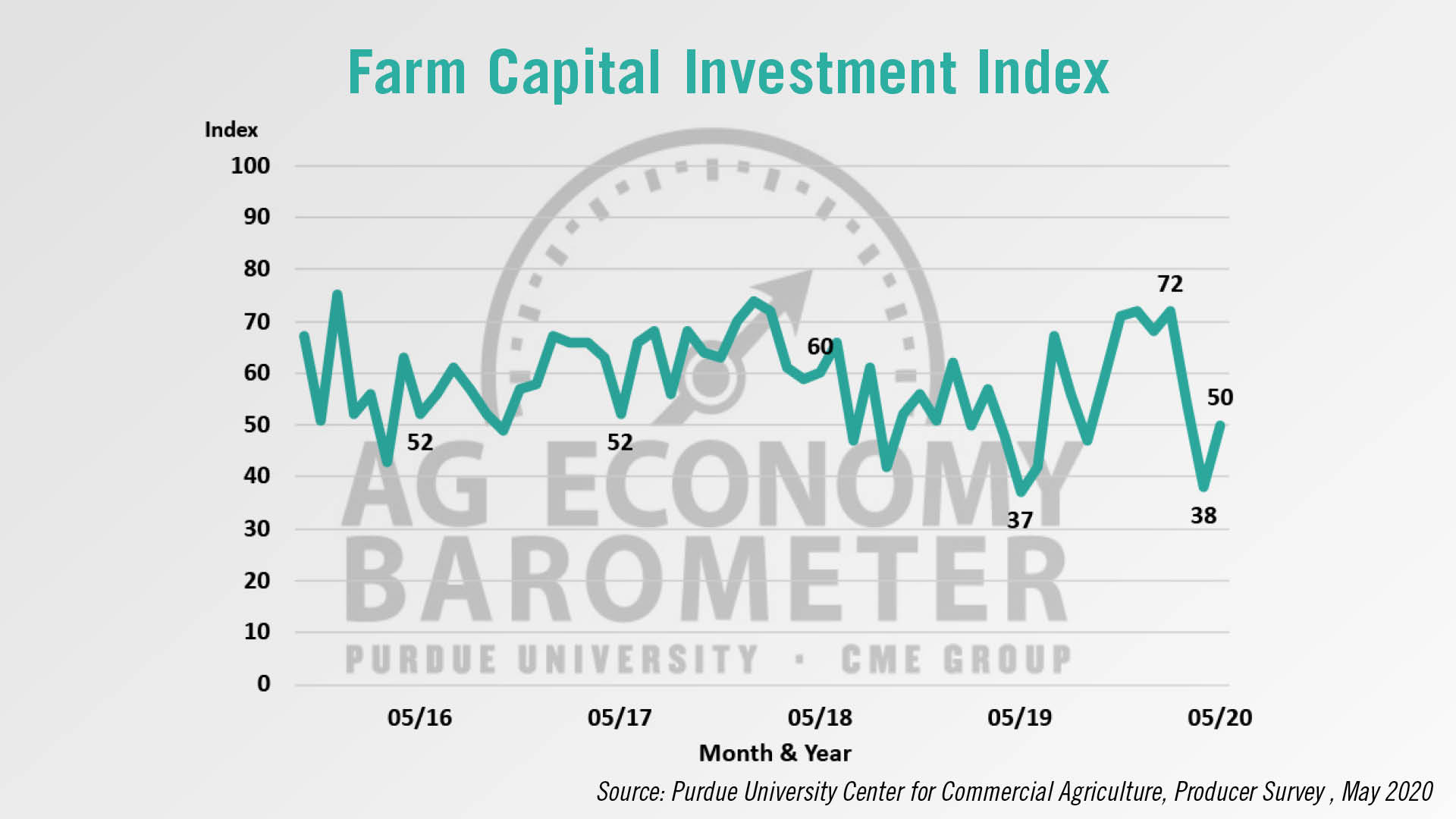 On a somewhat positive note, Purdue’s latest Ag Economy Barometer report shows that the Farm Capital Investment Index rose to 50 in May compared to 38 in April. This index measures whether farmers think it is a good time to make capital investments, including machinery purchases. However, this is still 20% below the February reading of 72.