According to a report from Purdue and CME Group, for the second month in a row, the Purdue University-CME Group Ag Economy Barometer dropped sharply, falling 25 points in April to a reading of 96. This marks the first time the barometer has fallen below 100 since October 2016, effectively wiping out all of the improvement in farmer sentiment that took place following the 2016 election. April’s decline leaves the Ag Economy Barometer 72 points below its record high, which was just established in February of this year. The Ag Economy Barometer is generated each month from 400 U.S. agricultural producers’ responses to a telephone survey. This month’s survey was conducted from April 19-24, 2020. 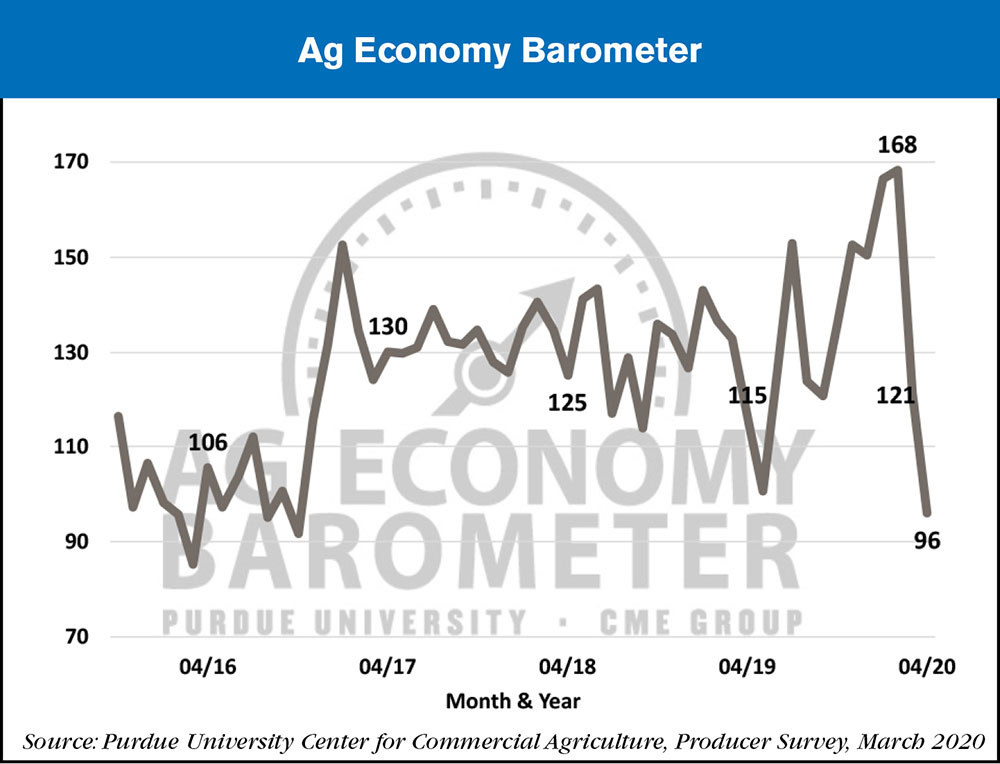 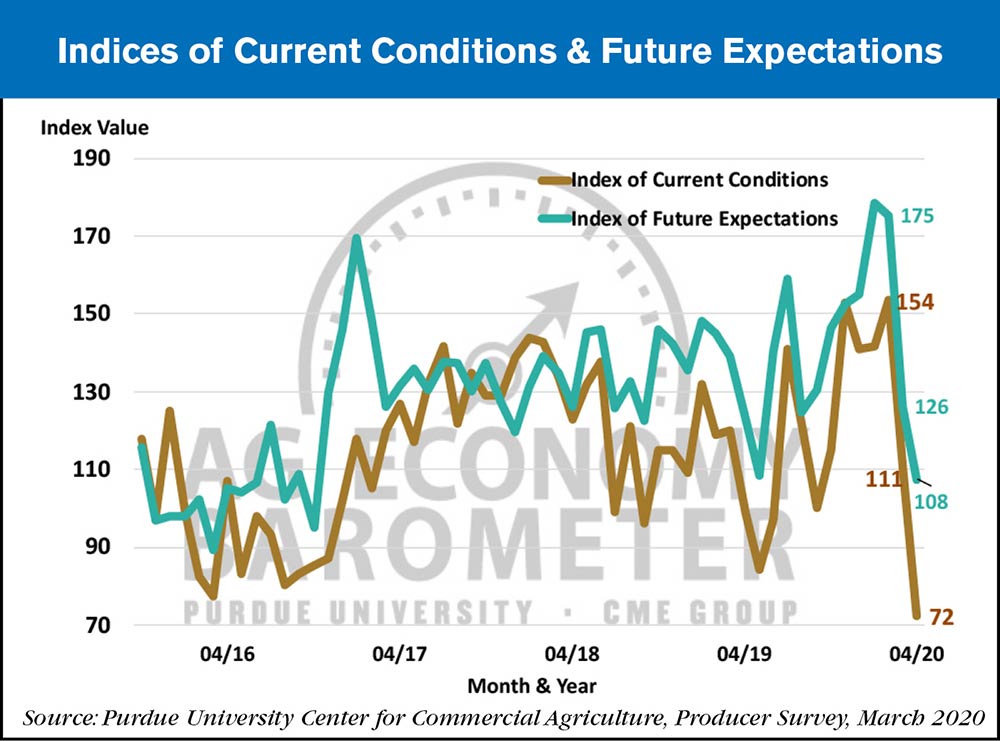 Underpinning the rise in pessimism among farmers was a precipitous decline in principal commodity prices over the last couple of months. For example, from March 2 through April 24, July CBOT corn futures declined 55 cents per bushel, a decline of nearly 15%. Over the same time frame July CBOT soybean futures declined 71 cents per bushel, a decline of 8%, June CME lean hog futures declined $25.50 per hundredweight, a 33% decline, and June CME live cattle futures declined $21.35 per hundredweight, a 21% decline. The commodity price declines are exerting tremendous financial pressure on many U.S. farm operations. When asked to compare their farms’ expected financial performance in 2020 to 2019, 55% of respondents in the April survey said they expected worse financial performance in 2020 than in 2019, which compares to 40% and 30% of respondents who felt that way when surveyed in March 2020 and December 2019, respectively.

Unsurprisingly, given the declines in commodity prices, farmers became more pessimistic about farmland values in April. When asked about their farmland price expectations 12 months ahead, the percentage of respondents expecting values to decline rose from 28 % in March to 35% in April. The shift in attitudes is more extreme when compared to results from this past winter. In both January and February, just 13% of survey respondents said they expected farmland values to decline in the upcoming year.

However, when producers were asked about their perspective on farmland values 5 years from now, they were noticeably more optimistic. In fact, the percentage expecting higher farmland values increased slightly to 44% in April compared to 41% in March, and the percentage expecting lower values fell to 9% in April from 12% in March. The divergence between producers 12-month and 5-year ahead expectations for farmland values suggests they view the current disruption in agriculture and food markets to be temporary and look for markets to rebound farther down the road. 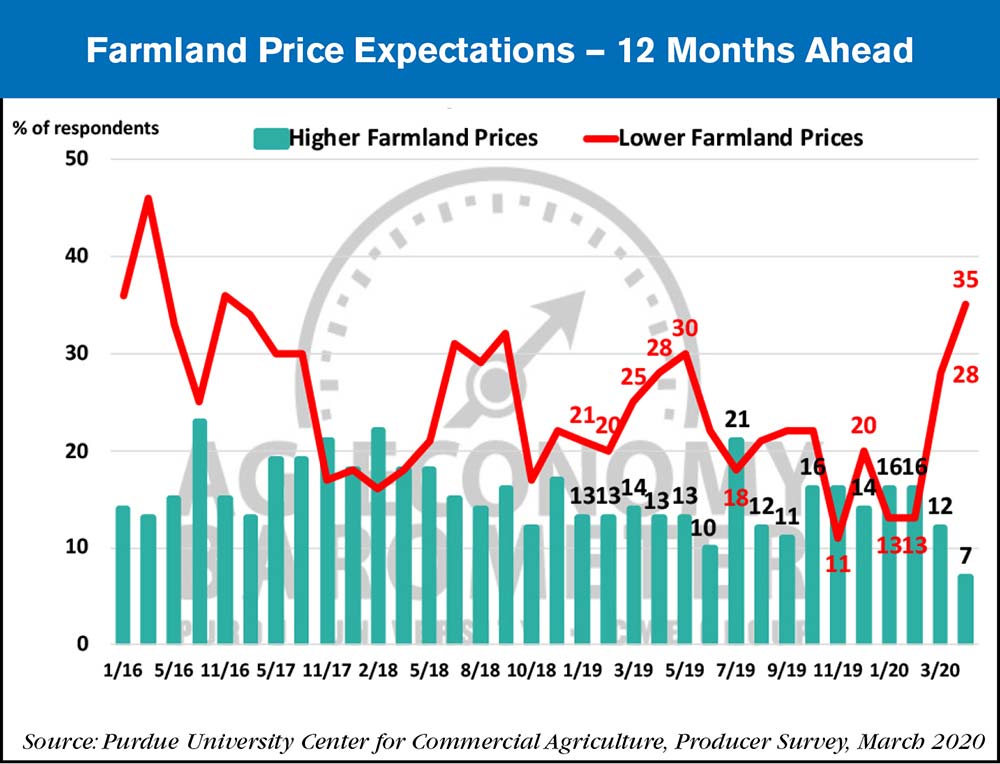 For the second month in a row, farmer sentiment declined sharply as the Ag Economy Barometer dropped below 100 for the first time since October 2016, effectively wiping out the improvement in sentiment that took place following the 2016 election. Dramatic declines in commodity prices, combined with concerns about coronavirus impact on farm profitability, led to the largest one-month decline in the Index of Current Conditions in the history of the barometer survey. Two-thirds of farmers participating in our April survey said they were either “fairly worried” or “very worried” about the coronavirus’ impact on the farms’ profitability this year. The percentage of farmers expecting their farms’ profitability to decline in 2020 compared 2019 increased to 55% in April, compared to 40% in March, and just 30% who felt that way in December 2019.

Over half of this month’s survey respondents said they anticipate applying for a COVID-19 related financial assistance program. Concerns about the economic outlook for their farms led fewer farmers to think now is a good time to make large investments in their farming operation as the Farm Capital Investment Index fell 16 points compared to a month earlier. This put the Farm Capital Investment Index near its lowest reading of 2019 which occurred in May amidst last year’s severe planting delays and low commodity prices. Unsurprisingly, farmers’ near-term perspective on farmland values weakened, but their longer-run perspective on farmland values actually improved slightly suggesting that they view the current disruption in agriculture and food markets to be temporary and look for markets and farm profitability to rebound in the years ahead.